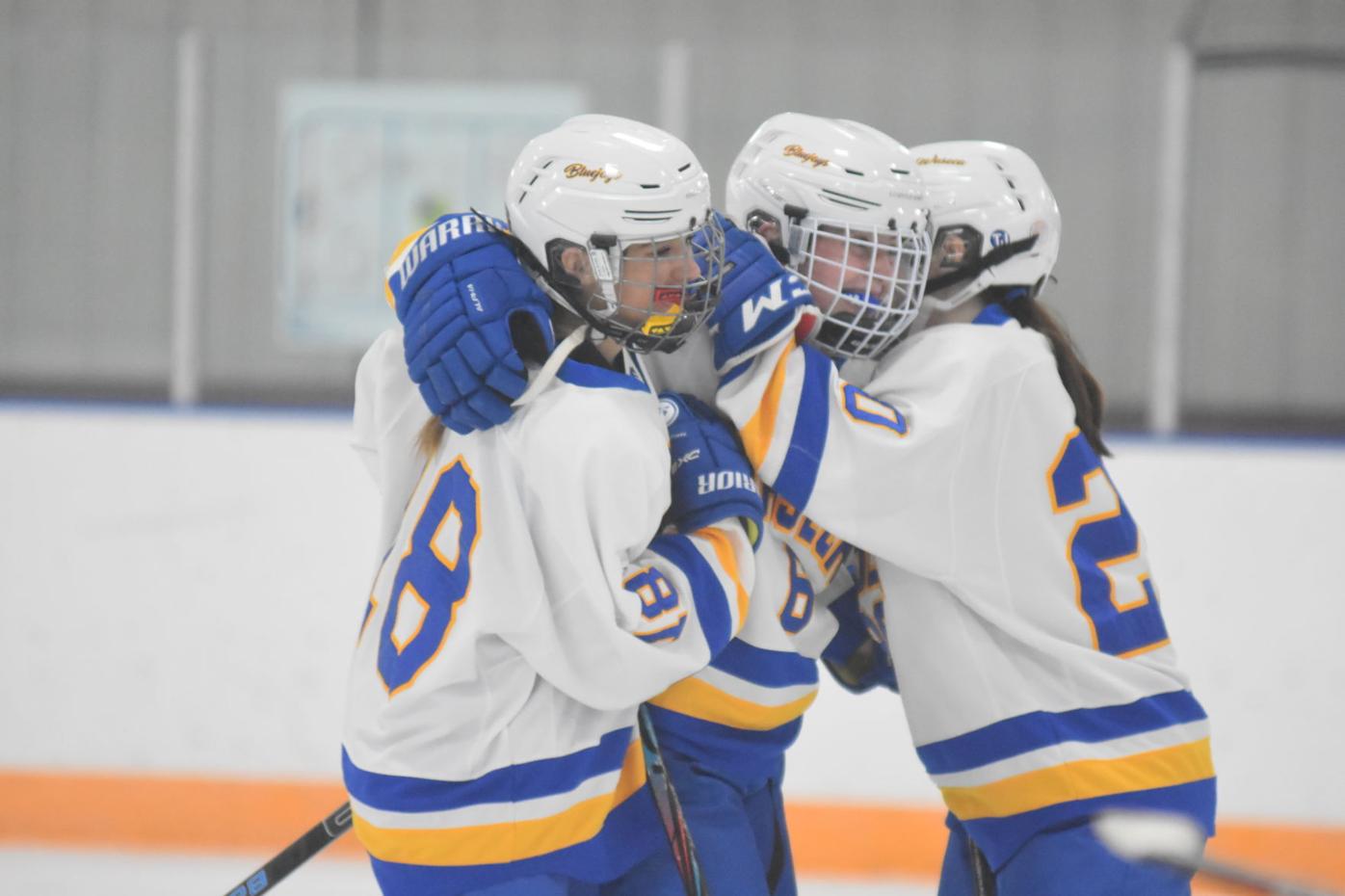 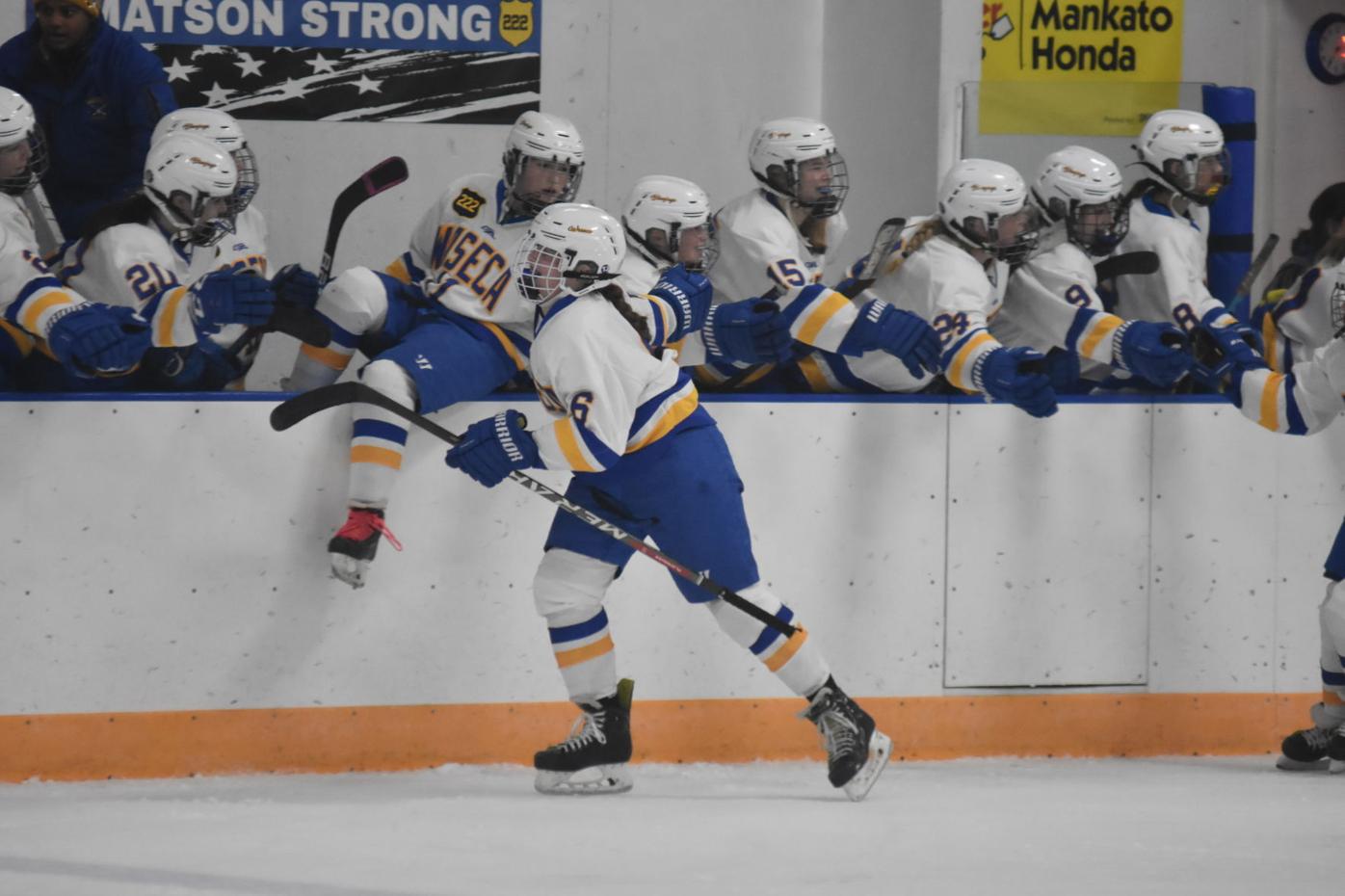 Waseca seventh grade forward Maizee Storey (6) celebrates with her team after one of her goals against Worthington. (Stephen McDaniel/southernminn.com) 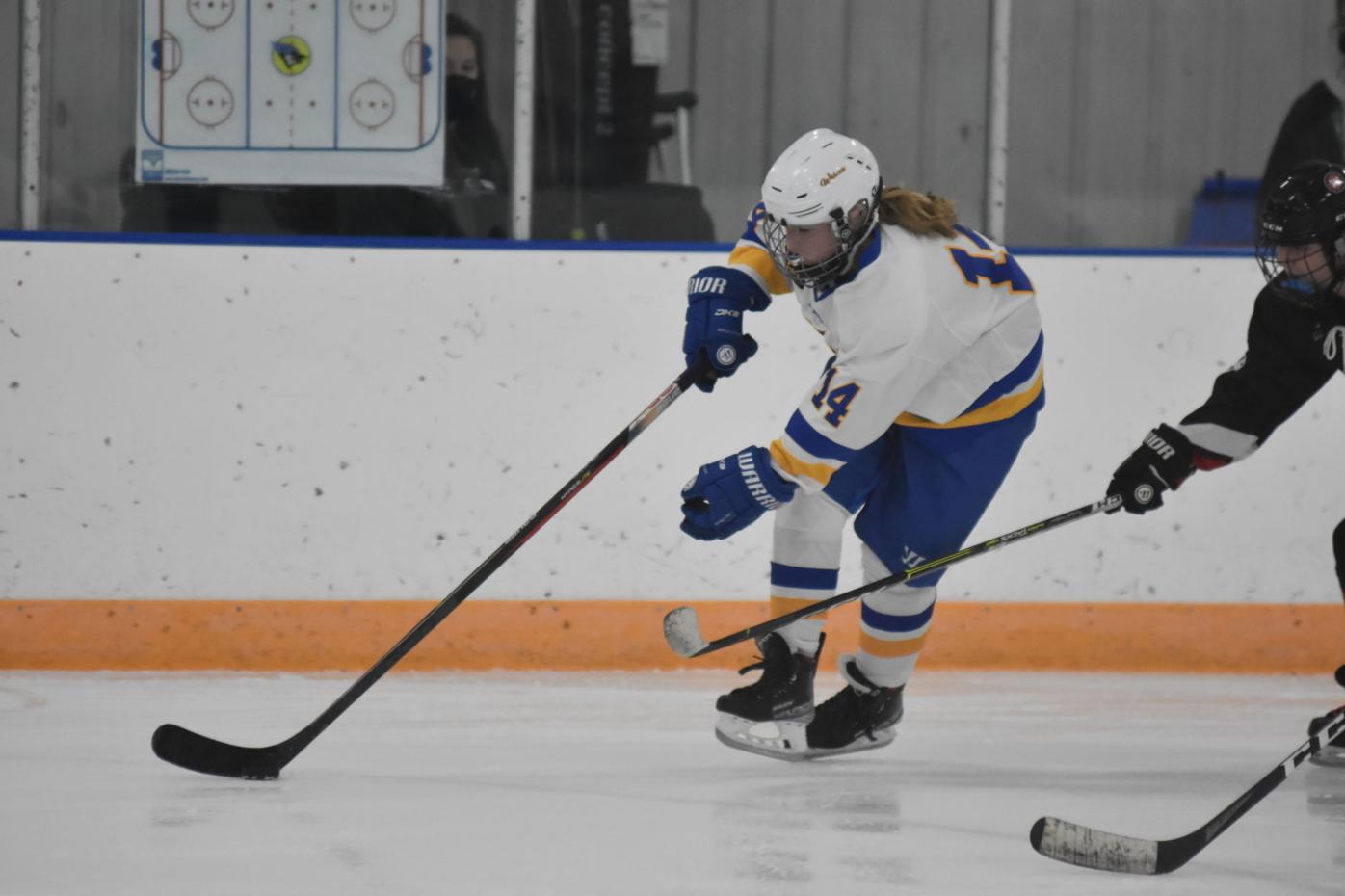 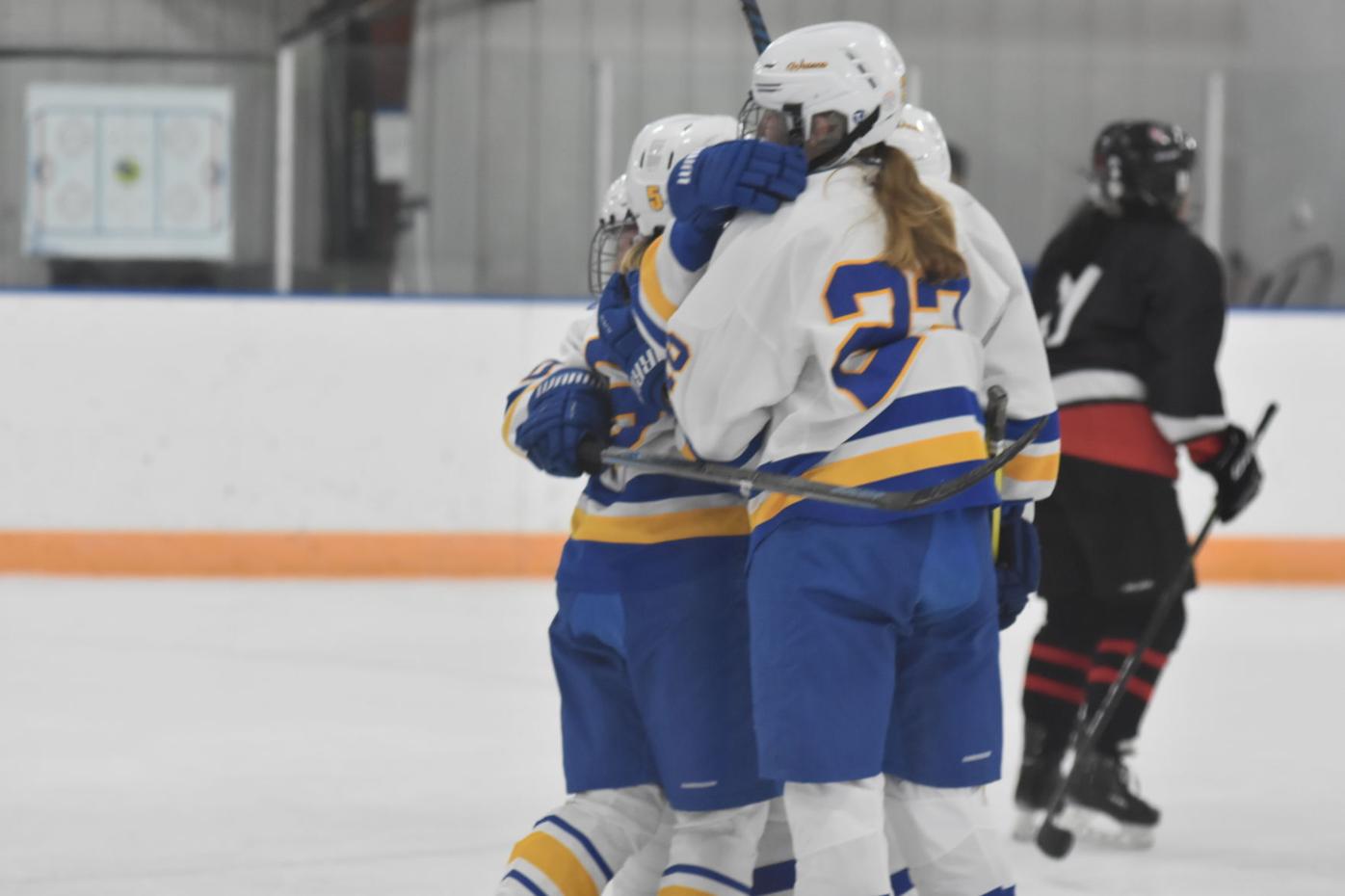 The Bluejays celebrate on the ice after Madalyn Benson (5) scored the game-winning goal in overtime against Worthington. (Stephen McDaniel/southernminn.com) 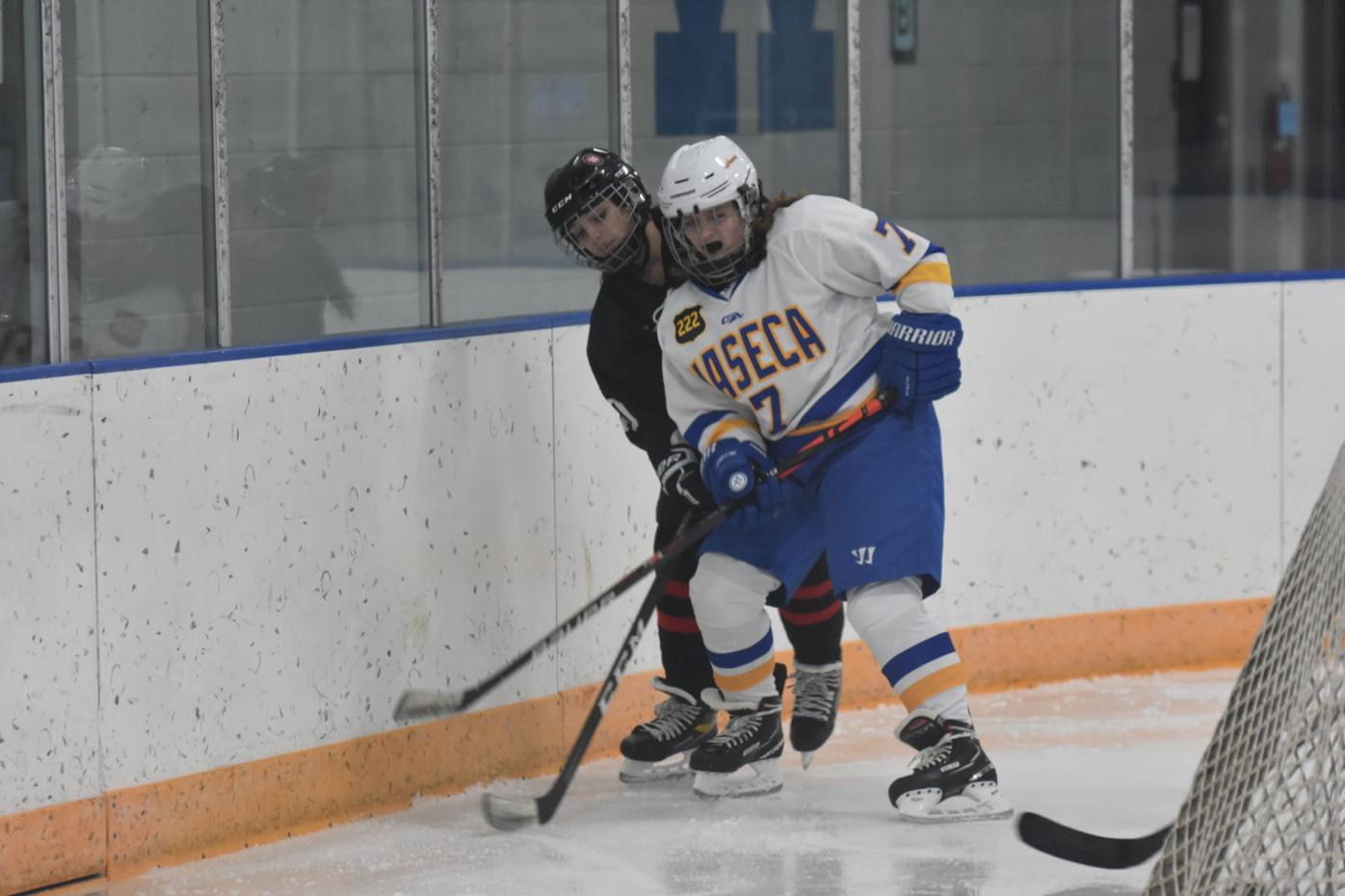 As the sound of the buzzer indicated the end of the third period, the battle-tested Waseca Bluejays and the visiting Worthington Trojans were stuck at a 5-5 tie.

Waseca’s last win came in January 2020, but thanks to eighth grade forward Madalyn Benson, the drought came to an end that overtime period with Waseca’s 6-5 win.

Worthington had a chance down in the Bluejays defensive zone to start extra time, but it was denied. Just over a minute into the period, Waseca quickly made a push to the opposite end of the ice. Freshman defender Ryley Bartz helped keep the puck in front of the Trojans net, where Benson tipped it in to win it for the Bluejays in overtime.

“It’s pretty exciting,” Waseca coach Sarah Tollefson said. “I mean these girls have worked so hard these past couple years to not have a win the last two seasons, and to come out this season with one, it’s just been huge.

“It was a game-changer. They fought back. To come from behind, to come out flat-footed and now to come home with a victory in overtime, that’s just awesome, and these girls deserve it.”

The game-winning goal from Benson doesn’t come as a surprise. Three games into the season, Waseca’s youth showed up and showed out in the Bluejays’ first win in 22 months. From start to finish, their young players made a heavy impact on the game.

Things looked sour after they went down 2-0 in the first period to the Trojans, but with just under two minutes left in the period, seventh grader Maizee Storey turned things around for the Bluejays. Storey took a long wrist shot from the point and beat Worthington’s sophomore goaltender to bring the game back to 2-1.

Waseca and Worthington started trading blow for blow. The Trojans went up 3-1, then sophomore forward Izabela Slechta tapped the puck between the goalie’s legs to make it 3-2. The Trojans closed out the second period with their fourth goal of the game to lead 4-2.

The third period is where Waseca really turned things around. Off a power play, junior defender Cecelia Huttemier buried a shot from the high slot and brought the game back within one goal just over five minutes into the period.

A few minutes later, Benson got the puck on a rebound and took a shot, which hit off the goalie’s pad before she tapped the puck into the net to tie it up and recorded her first goal of the game.

Storey scored her second goal of the night and of the season minutes later to give Waseca its first lead of the season. However, a defensive miscue with just over five and a half minutes left led Worthington to tie the game 5-5, forcing the overtime period where Benson would score her second goal of the night and put the Bluejays back into the win column.

Between the pipes, junior goaltender Alicia Kelly faced 28 shots and recorded 23 saves for a .821 save percentage.

Heading into the season, Waseca knew that there were going to be some growing pains and a whole lot of adjustment for the youth on the roster with five seventh graders, two eighth graders, five freshmen and just four sophomores and five juniors as the “veterans.”

The team faced a rocky start its first two games, but now the youth is beginning to show signs of adjustment to varsity hockey.

“As young players, to step up like that, play every other shift, do what we’re asking as coaches,” Tollefson said. “They learned a lot over the past two weeks and they put it out there tonight in the game.”

Storey (seventh grade) had two goals; Benson (eighth grade) had two goals, including the overtime winner; and Bartz (freshman) had an assist on both of Benson’s goals. Even outside of the score sheet, players like seventh-grade forward McKenna Mortensen kept generating pressure and putting the Bluejays in a good spot on both ends of the ice.

The pressure that they were able to generate offensively also led them to outshooting their opponent for the first time this year, with shots going 33-28 in favor of Waseca.

In the season opener, it was outshot 55-5, and in its second game of the season against Fairmont, it got outshot 45-17. On Saturday, the Bluejays pulled ahead in the third period through multiple power play and even strength chances and outshot the Trojans 14-3.

The win also comes at a great point for Waseca, which still has most of its season ahead of it. The chances to run a power play, the chances to work on the penalty kill and especially the chance to feel an actual overtime period all serve as a massive building block for the Bluejays.

Huttemier’s goal on the power play in the beginning of the third period stands as the Bluejays’ first and only power play goal of the year. It was Waseca’s first overtime game since its 2-2 tie against Albert Lea in the 2018-19 season.

“I think the girls learned a lot tonight. I would say going into overtime was something that we’re going to use in the future,” Tollefson said. “We’re going to have a lot of competitive games this year. This is our first overtime for a majority of the girls on this team, so for them to experience that and come out with a win, it’s going to go a long way for confidence building.”