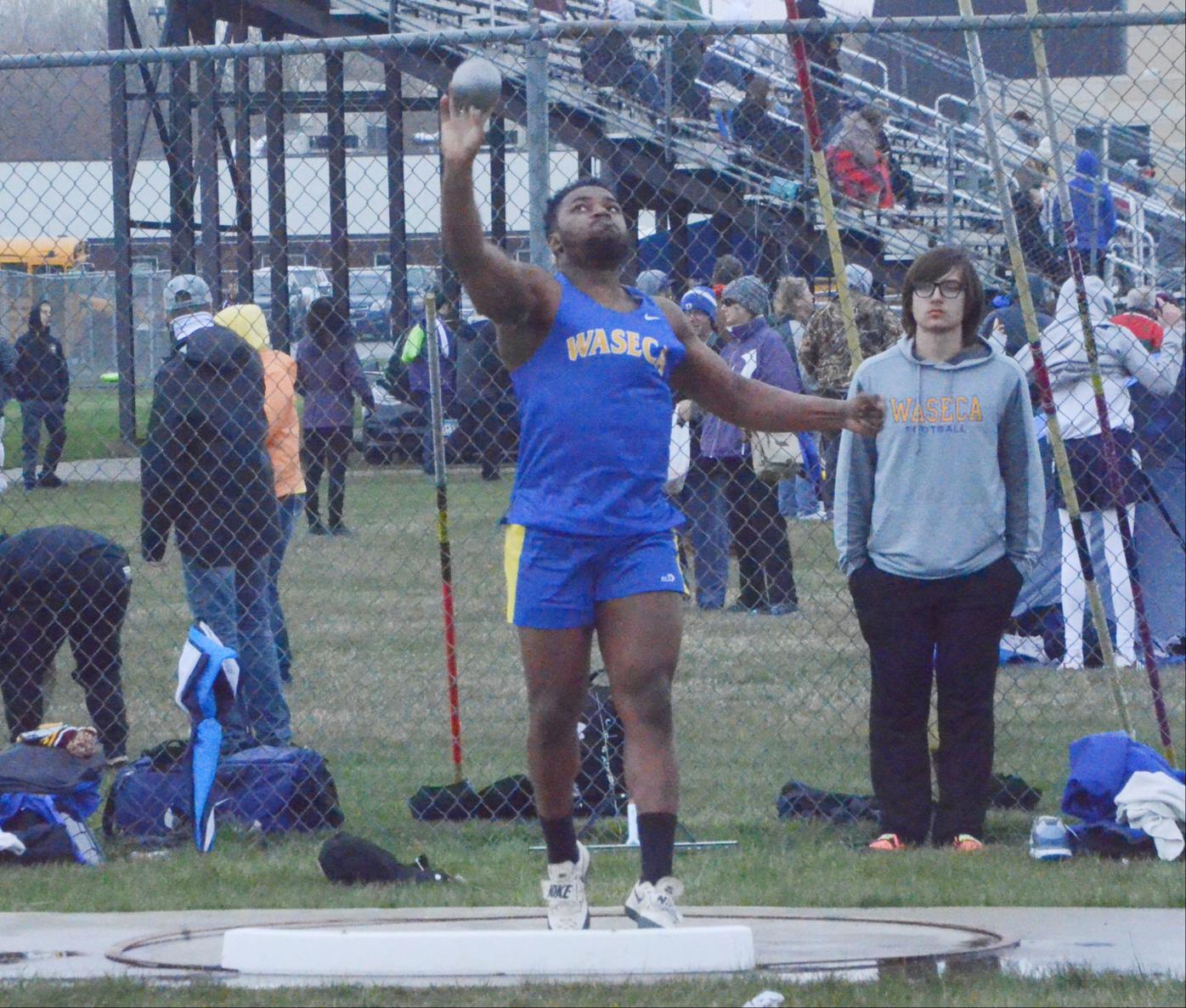 Waseca’s Marcus Hansen has rewritten the school’s record books three times already this season. He reset his own shot put record Tuesday afternoon with a throw of 60-feet-4-inches. (Lucas Seehafer/southernminn.com)

Standing at around 6-feet tall and weighing in at over 200-pounds, Hansen is barrel chested with a sturdy trunk, which allows him to generate intense amounts of power through his arms and legs. This has helped him rewrite the athletic history books stored within Waseca High School.

Hansen is the Bluejays’ best shot put and discus thrower and while his teammates are able to throw the shot in the 25-40-foot range during competition, his consistently reach into the mid-50s or beyond. Prior to this season, no Waseca athlete had ever thrown the shot beyond 60-feet.

That is until Tuesday afternoon.

During the meet held at Waseca High School, a damp, bone-chilling wind blew in from the northeast at 15 mph with gusts reaching above 20 mph. The shot put platform at the southern end of the track and field facility faces to the south, which allowed the wind to add valuable inches to each athlete’s throw.

Hansen’s final of four throws was launched beyond the lime outlining the shot area and landed with a triumphant thud in the grass just beyond. The official distance was 60-feet-4-inches, a new-new-new Waseca High school record.

Hansen has set the record in three of his four meets thus far this season, with the first occurring on April 9 and coming in at 59-feet-4 inches, an entire foot shorter than his most recent. However, despite his proclivity to do so, Hansen doesn’t necessarily approach each meet with a desire to go down in school history. He simply wants to beat himself.

“It doesn’t feel as much like a school record as it does a personal thing. I already know I set it once and I just want to keep pushing myself. It isn’t as much [about] beating anyone else as beating myself over and over again,” Hansen said after his record re-breaking toss.

It’s this desire to improve in addition to his attention to detail that makes Hansen so successful, according to Waseca throwing coach Brad Wendland.

“I think the best part about Marcus is above the shoulders,” Wendland said. “He’s just such a student of the sport, whether it be football or track and field. He’s so driven and he pays attention to detail. He studies film, he’s passionate. He makes his way up to [the University of Minnesota] to get coaching from the best coaches in the state. They’ll point out little things to him and then he’ll bring that stuff back and he’ll pass it on to me and pass it on to our kids. He’s just a dream to coach.”

Hansen will attend Bemidji State University next fall on a football scholarship and currently doesn’t hold any plans on continuing his track and field career. However, as stated by Wendland, that hasn’t stopped him from seeking out tips and tricks from some of the best in the state at the shot and discus events.

Doing so has not only helped Hansen perform admirably, but also honed his leadership skills, an area in which Wendland has seen him grow tremendously since the beginning of his high school career.

“That’s kind of been interesting, the evolution of Marcus. He’s always been an awesome athlete and he’s always been likable, but he hasn’t always been outspoken as a leader,” Wendland said. “But as a senior, he’s kind of developed that piece and that’s been kind of the last step in the [evolution to becoming] the athlete/leader that he’s become.”

Becoming a leader is not necessarily something that he has worked on intentionally, Hansen says. Rather, it has come with time, confidence and his results.

Nobody would fault Hansen for developing complacency following his run of success. After all, he out threw the second place finisher in the shot put event by nearly 20-feet Tuesday afternoon. However, “complacency” and all of its synonyms have no place within the lexicon of Marcus Hansen.

Both the Waseca boys (108) and girls (96) teams finished second overall during the meet Tuesday afternoon, placing behind Fairmont.

In addition to his victory in the shot put, Hansen also claimed the top spot in the discus event with a throw of 144-feet-8-inches, beating out the second place finisher by nearly 30-feet.