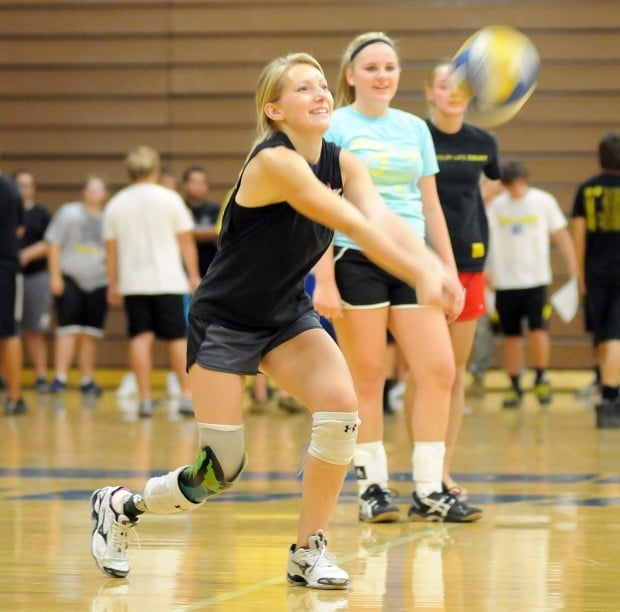 Lexi Shifflett bumps the ball at Waseca volleyball practice last week. Shifflett was born with fibular hemimilia, a condition where her right leg was shorter than her left, and had part of her foot amputated when she was an infant. (Miles Trump/County News) 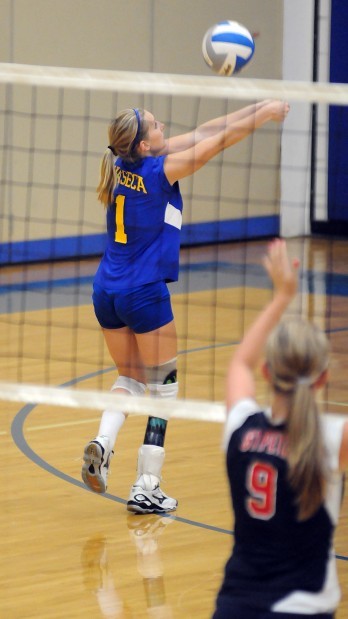 Lexi Shifflett bumps the ball at Waseca volleyball practice last week. Shifflett was born with fibular hemimilia, a condition where her right leg was shorter than her left, and had part of her foot amputated when she was an infant. (Miles Trump/County News)

First-year Waseca volleyball coach Kelli Fagerness didn’t know what to think when freshman Lexi Shifflett walked into the gym about two years ago.

Shifflett was noticeably different than the other girls – she wore a carbon fiber prosthetic on her right leg, the result of doctors amputating a portion of her foot when she was an infant. Shifflett was born missing her fibula, two toes and ankle bones.

“I didn’t know how much she was going to be able to do. I had no idea,” Fagerness said. “And she impressed us from day one with how she worked.

Now a junior, Shifflett is getting plenty of court time on varsity, helping lead the Bluejays’ offense when she comes off the bench as a setter. The 16-year-old also found out in August she’d earned a spot to practice with the U.S. national women’s sitting volleyball team in hopes of playing in the 2016 Paralympics in Rio de Janeiro.

“My parents would always tell me, ‘You have the capability of doing whatever everyone else is doing, you just have to figure out a different way to do it,’” Shifflett said.

Shifflett, despite her prosthetic, gets around well on the court. She runs, sets and jumps just like her teammates. Yet in a sport such as volleyball, where players uniforms bare most of their legs, Shifflett isn’t afraid to be herself – which means letting her prosthetic show in front of opposing players, coaches and fans.

“That’s how people will remember Lexi – the girl with the prosthetic leg,” said her father, John Shifflett. “For her, that does not define her.”

‘There’s not anything she can’t do…’

Shifflett was born with fibula hemimelia, a condition that left her right leg significantly shorter than her left. Her parents, charged with making a decision on treatment, elected to have doctors amputate part of her right foot rather than trying to lengthen it – a slow and painful process that didn’t guarantee any results, her father said.

“It was tough,” said her mother, Katie Shifflett, of making the decision for their first-born, infant daughter.

After the amputation, doctors encouraged the Shiffletts to get Lexi involved early in activities, helping her to keep from shutting down. She tried all kinds of sports – gymnastics, dance, swimming. Volleyball and softball, which she also plays at Waseca, seemed to stick.

“There’s not anything she can’t do I guess is what we’ve taught her,” Katie Shifflett said.

Waseca lost 3-1 and has struggled early in the season. While having a good season is important to Shifflett, playing sports also means being amongst friends. Several of Shifflett’s volleyball teammates, such as juniors Jordan Paulson and Quinn Harguth, have become some of her closest friends since they started playing middle school volleyball together. Shifflett calls the volleyball team “her second family.”

“Volleyball has brought us really close,” Harguth said, “and now that she can branch out of that, that’s amazing.”

“I think it’s really amazing,” Paulson said of Shifflett playing with a prosthetic. “I sit here and I’m on two feet and I have a hard time doing stuff. And then I think of her.”

Playing for a Waseca club volleyball team at a tournament last March, Shifflett caught the eye of Cara Lang, an assistant coach of the U.S. women’s sitting volleyball team at the tournament. Lang gave Shifflett her card, and a few days later the 16-year-old was on her way to Edmond, Okla., to practice with a tryout team at a Team USA development camp.

Shifflett’s practiced in Oklahoma several times since then. But it was in Toronto in May, playing against the men’s Canadian national team, where Shifflett proved herself to Team USA officials.

“She did such a tremendous job that by the last match of competition, Canada stopped serving the ball at her purposely,” said Elliot Blake, sitting volleyball coordinator for Team USA.

“They focused on other players because they knew she would pass the ball on target,” he said, “so in my mind, she was proving herself almost instantly that she’s becoming a great player.”

Shifflett received word in August that she was being called up to practice with the national team in November to try earning a spot on the team.

“It’s amazing,” Shifflett said. “I never thought in my wildest dreams I would be playing for the U.S. I just thought that was an unreachable goal, and then this past year totally changed that around.”

In sitting volleyball, a regulation court size is 6-by-10 meters, and the net is 1-meter high for women. Players scoot around on their bottoms, and cannot lift their rear ends from the court when executing any type of attack or hit.

The experience with the U.S. national team has allowed Shifflett to meet people who have similar physical disabilities, her mother said.

“She’s never really been exposed to other people like her,” Katie Shifflett said, “so I think that part of it makes her feel like, ‘People do actually think like me.’ We’ve never brought her up to believe that she’s been any different, but it’s obvious that she’ll get treated different in certain situations.”

Blatant stares from people at times make Shifflett uncomfortable, she said, but she’s become more confident about her condition over the past few years. She wants to play college volleyball after high school, and she’s working toward her goal of playing in the 2016 Paralympics.

“When she was first born, … just out of my own ignorance, (I) didn’t expect her to do the things that she does,” her father said.

And now that she's finding success in some of those things?

"It makes you feel good," he said.

Reach Sports Editor Miles Trump at 837-5447, or follow him on Twitter.com @WCNSports.

What is sitting volleyball?