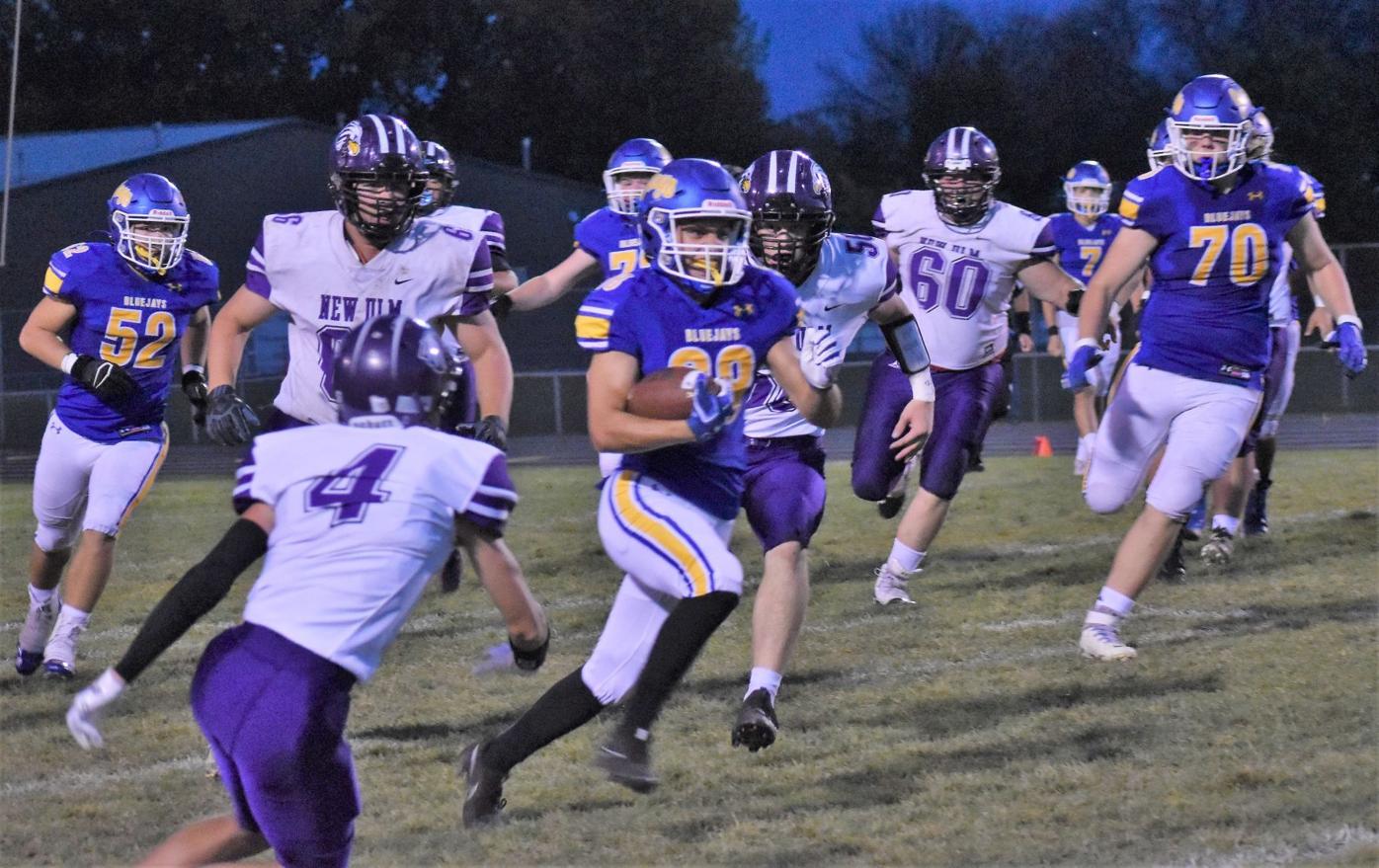 On the first play of the game, Waseca running back Christian Rodriguez breaks free on a 38-yard run against New Ulm. (Pat Beck/southernminn.com) 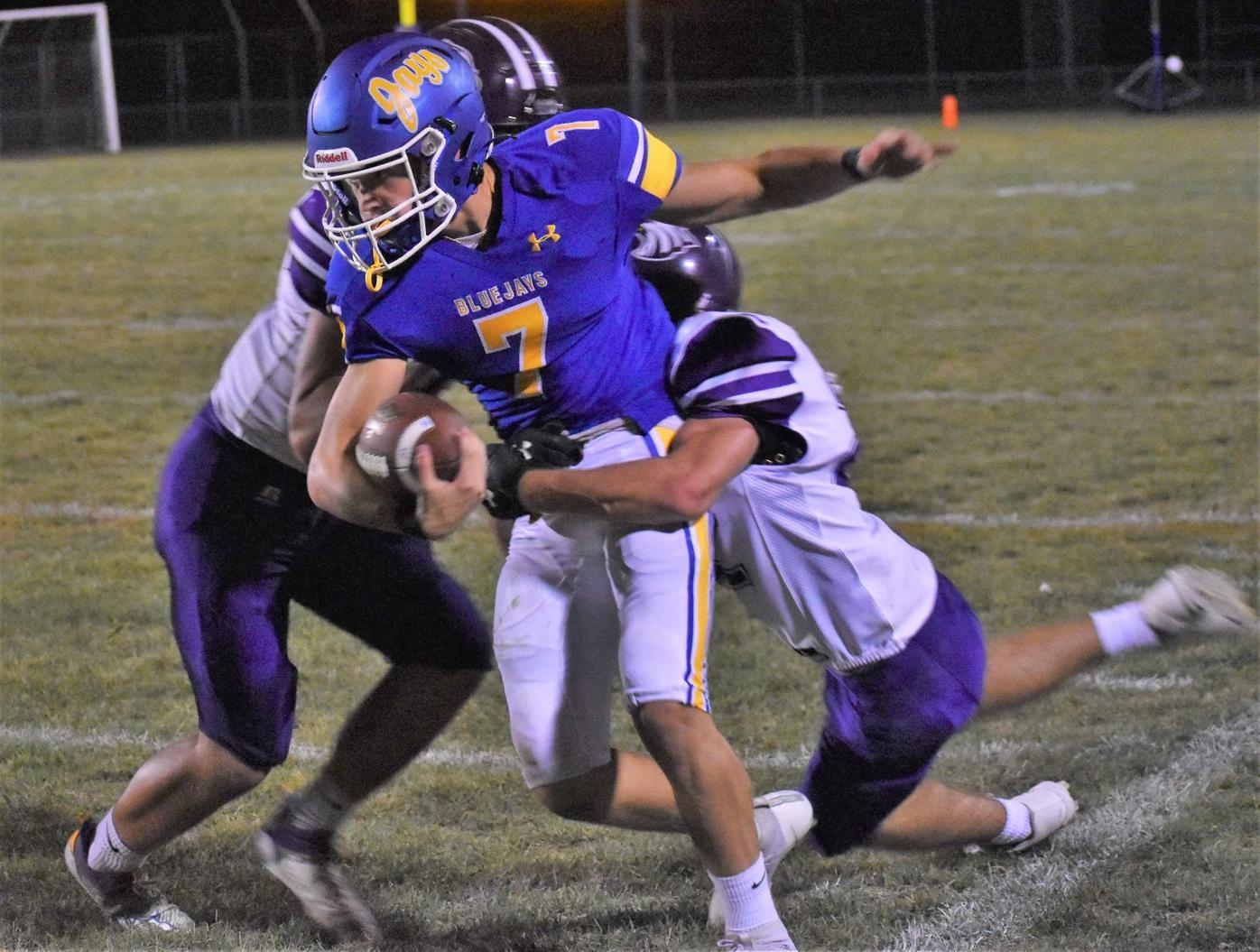 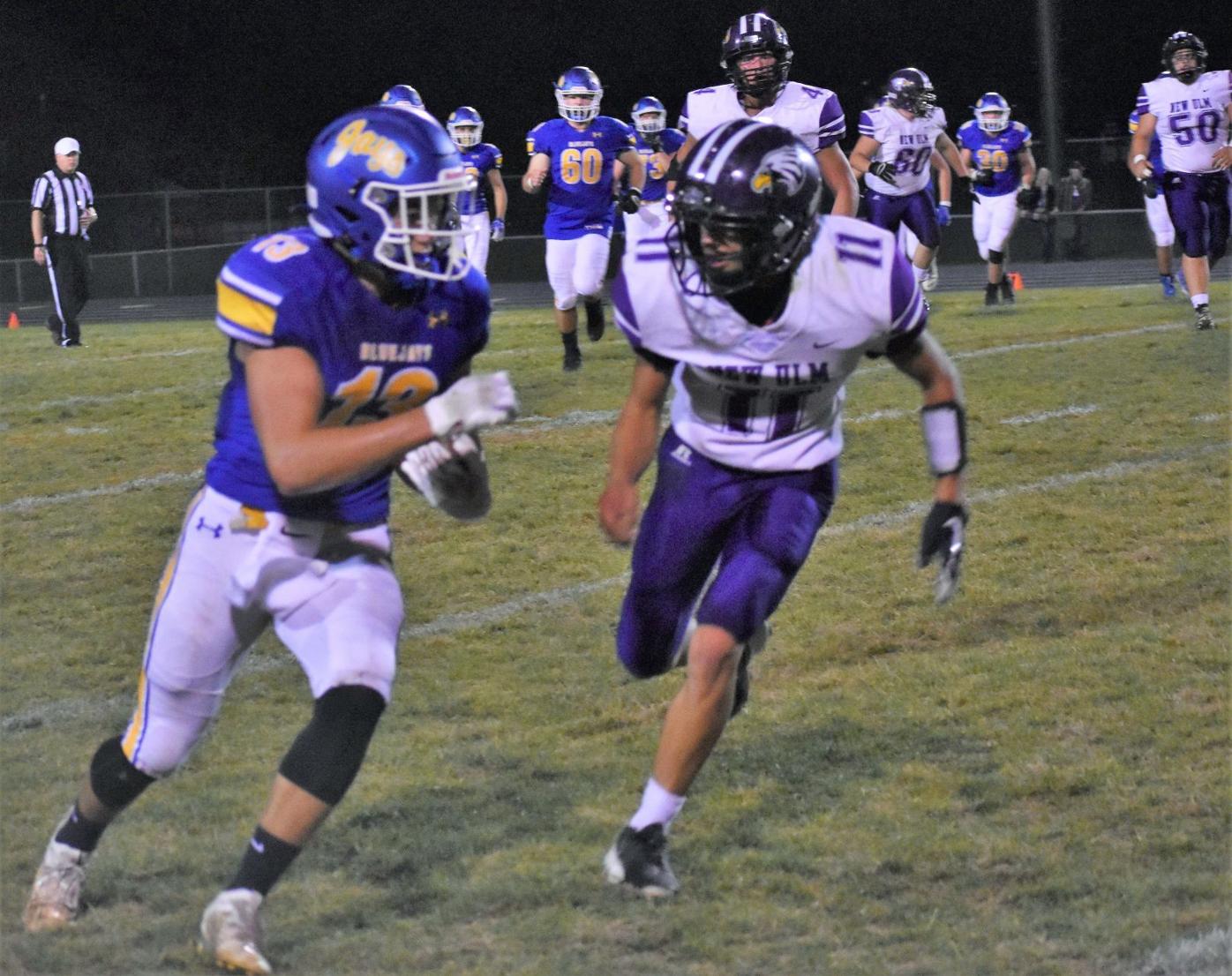 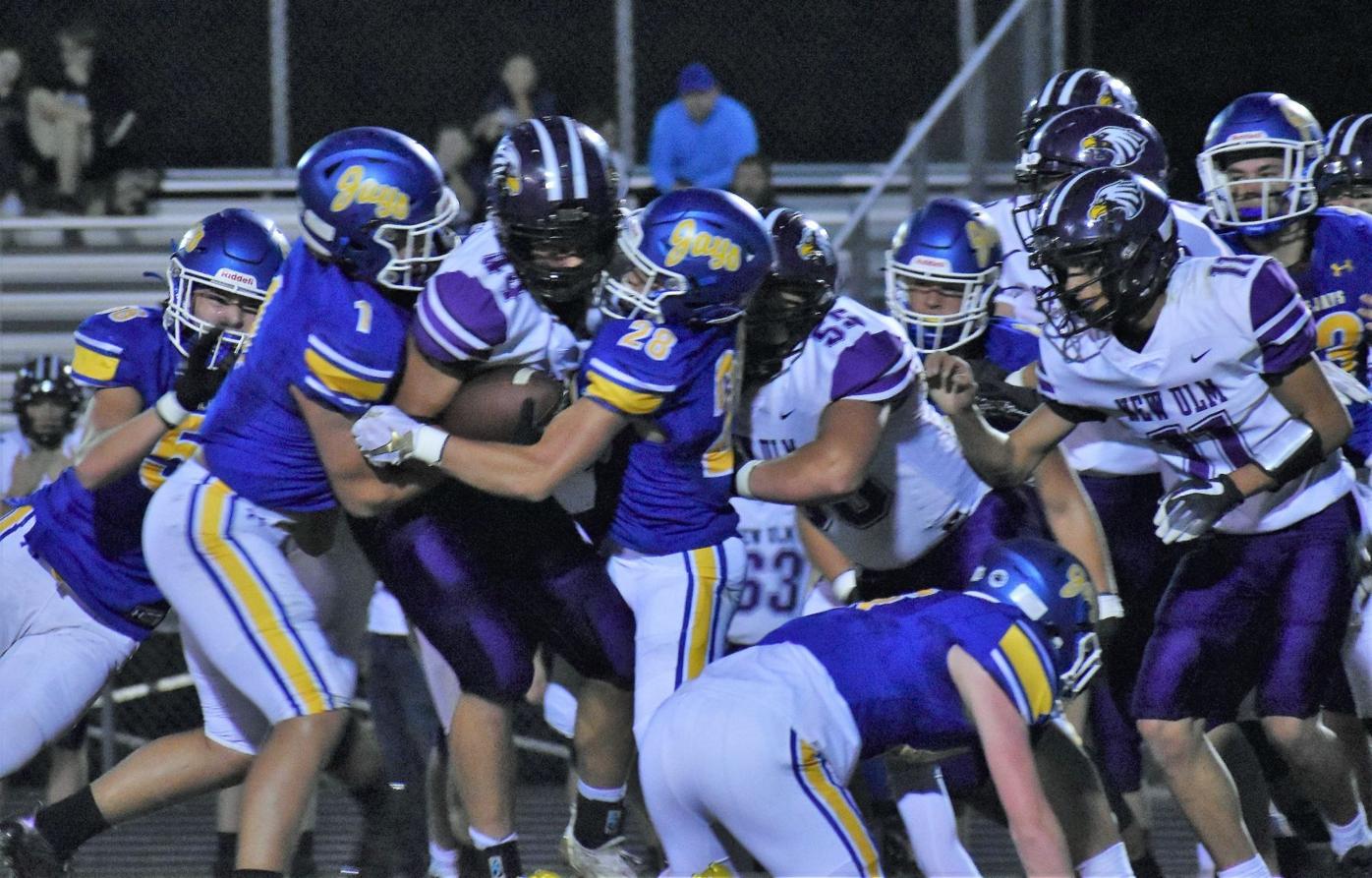 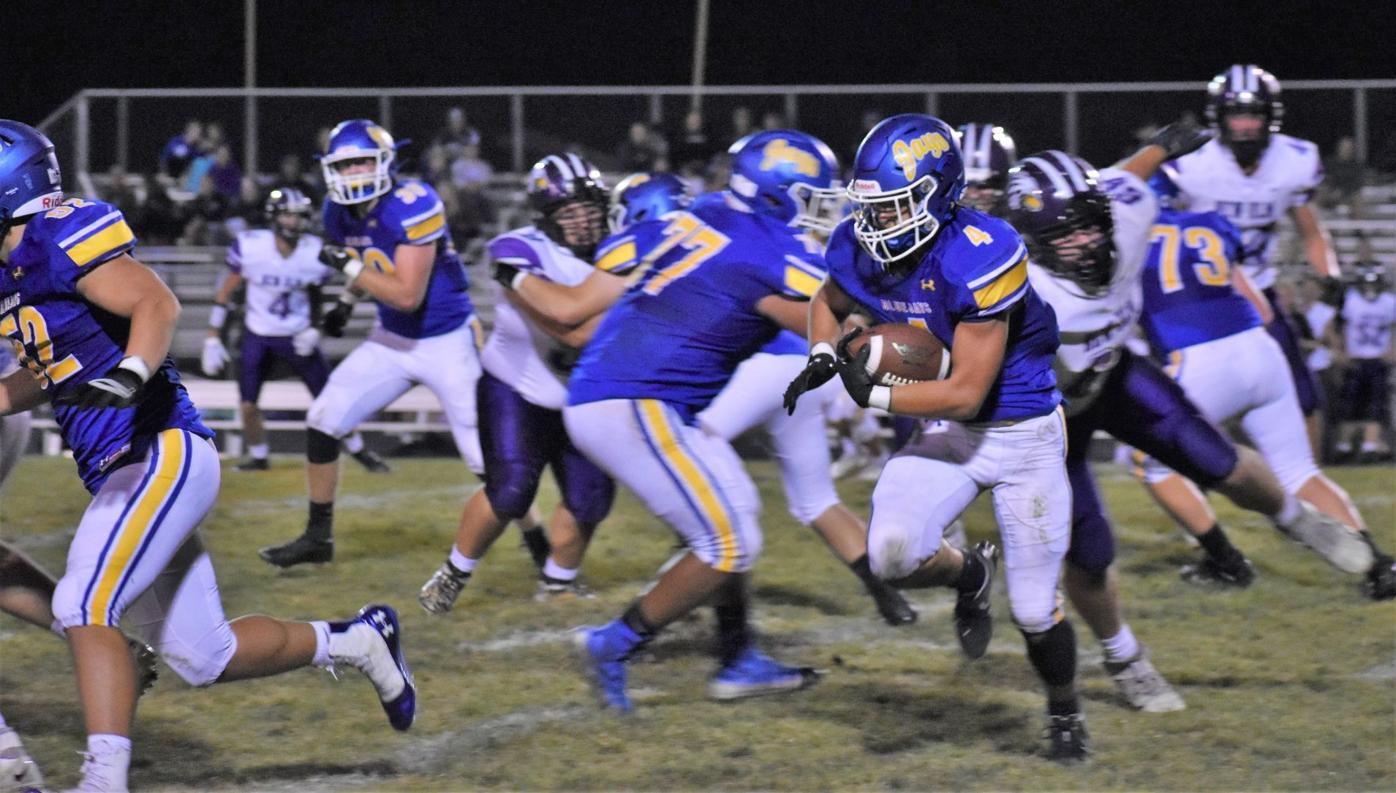 On the first play of the game, Waseca running back Christian Rodriguez breaks free on a 38-yard run against New Ulm. (Pat Beck/southernminn.com)

Starting off with a big bang, the Waseca football team rolled to a 38-6 Homecoming victory over New Ulm on Friday.

On the first play of the game, junior running back Christian Rodriguez ran a 38-yard jet sweep to the right down to the Eagles’ 6-yard line, and junior quarterback Ollie O’Brien capped off the two-play drive with a 6-yard touchdown run up the middle. O’Brien’s run for two points fell short, and the Bluejays led 6-0 with 9:40 to play in the first quarter.

Rodriquez credited the Bluejays’ offensive line for their running success.

“We have a great line,” Rodriguez said. “I love the guys.”

The tackles are Ian Medin and Jacob Kehler, the guards are JD Delgado and Payton Garza, and the center is Jacob Harty.

An interception by defensive back Jack Nelson set up the Bluejays’ next touchdown. The Bluejays drove 88 yards, and on fourth-and-2, Rodriquez scored on a 19-yard power run up the middle with 5:18 left in the second quarter. Once again, O’Brien’s run for two points failed, and the Jays led 12-0.

On the Bluejays’ next possession, O’Brien completed a 42-yard pass to wide receiver Isaac Potter that put Waseca on New Ulm’s 20-yard line. O’Brien then scored his second touchdown on a 2-yard run, and the pass for 2 points failed, giving the Jays an 18-0 lead with 49 seconds to play in the first half. That’s how the half ended.

The Eagles attempted an onside kick to start the second half, and the Bluejays recovered on their 40-yard line. They drove 60 yards, and Rodriguez scored his second touchdown on a 3-yard run. Shaun Hulscher kicked the extra point, and the Jays led 25-0 with 6:49 to go in the third quarter.

A blocked punt set up Waseca’s next touchdown. Jarrett Ahlschlager blocked it, and Max Neaves recovered it on the Eagles’ 2-yard line. O’Brien then completed an 8-yard touchdown pass to running back Mason DeKruif, and Hulscher kicked the extra point for a 32-0 lead with 2:13 left in the third quarter.

Potter then scored on an 86-yard touchdown pass from O’Brien to cap off a four-play, 98-yard drive with 10:30 to play in the fourth quarter.

With Waseca’s second stringers in, New Ulm ended the shutout on a nine-play, 63-yard drive, capped off on a 2-yard run by running back Dylen Carreon who led the Eagles with 24 carries for 94 yards. The extra point kick failed, and the Jays led 38-6 with 5:49 to play.

O’Brien completed 7 of 13 passes for 169 yards and three touchdowns.

Rodriguez said O’Brien is a good leader. “He’s very decisive. He cheers the team on, hypes us up, and makes us do better.”

Potter led with three receptions for 135 yards and one touchdown.

DeKruif caught three passes for 31 yards and one touchdown, and John Long caught one pass for 3 yards.

Linebacker Jack Nelson led the defense with 10 tackles and in interception. Potter, a defensive back, made nine stops. Waseca had four quarterback sacks with two by Derek Bakken and one each by Neaves and DeKruif.

Rodriguez, who doesn’t play defense, said, “We had good defense. I love watching them.”

New Ulm remained winless at 0-6, while Waseca improved to 5-1.

“We worked hard all week in practice, and it pays off on the field,” Rodriguez said.