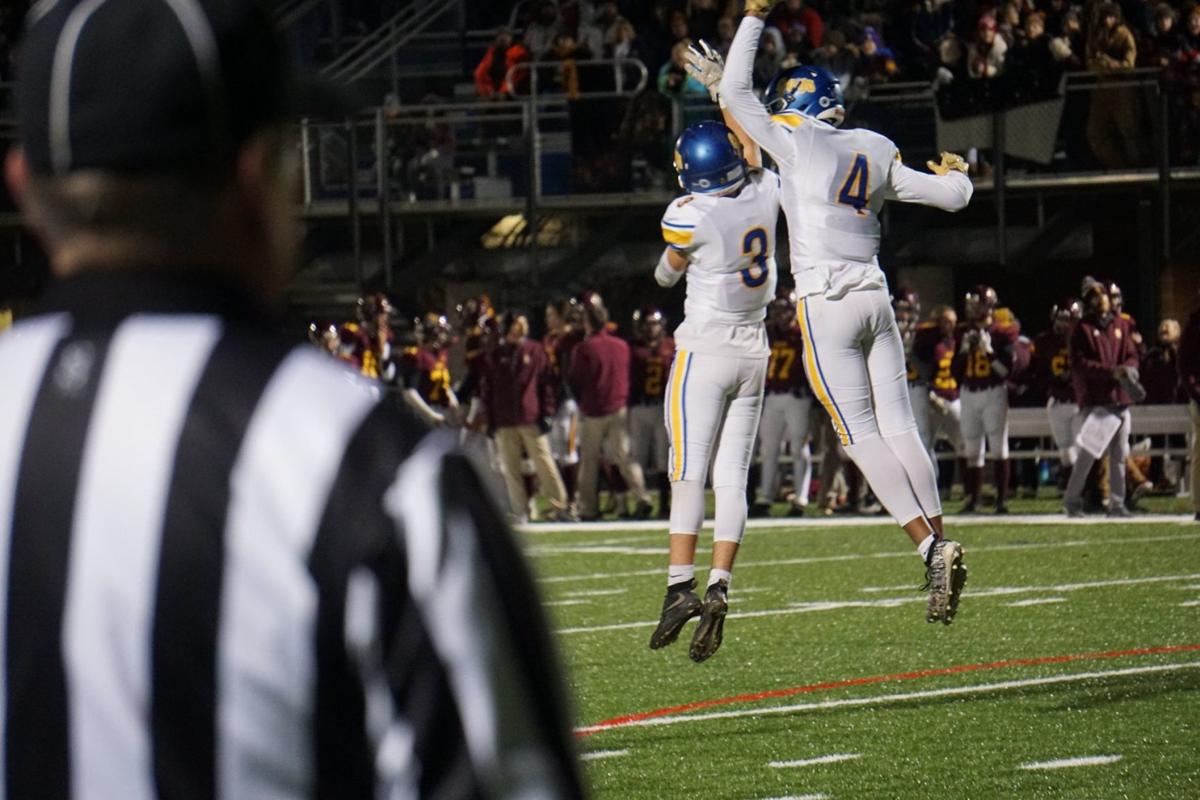 Waseca celebrates another touchdown en route to their victory over No. 1 seeded Stewartville in the section championship game. (Photos courtesy of Barb Hansen) 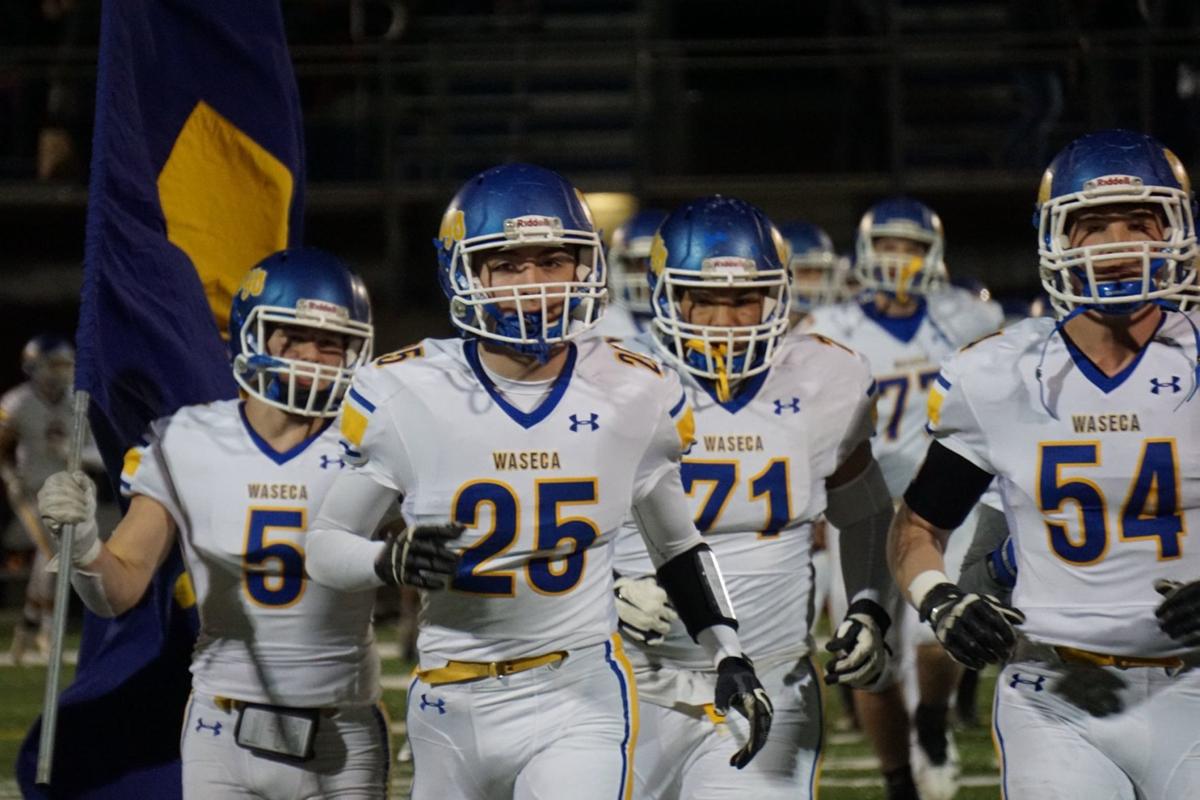 Waseca is now 7-2 on the year following their victory over Stewartville. (Photos courtesy of Barb Hansen) 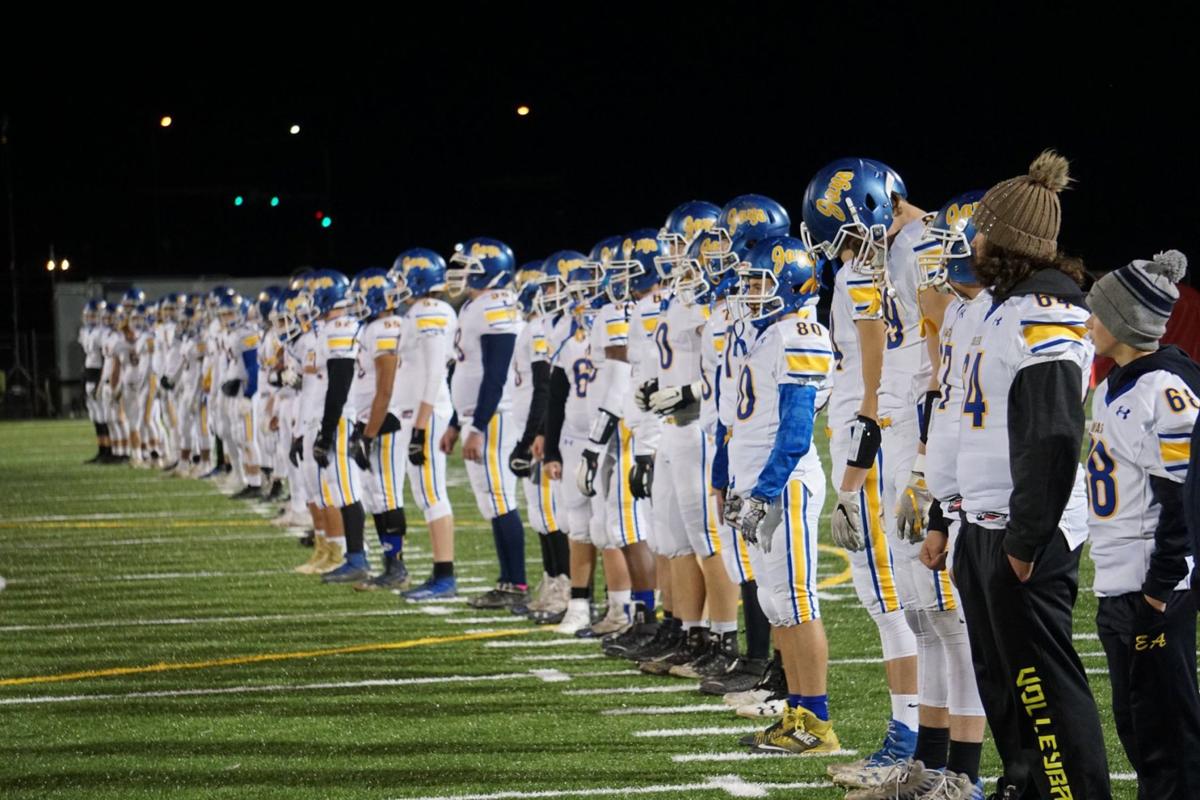 Waseca advanced to the section championship game after defeating Rochester Lourdes at home in the semi final game. 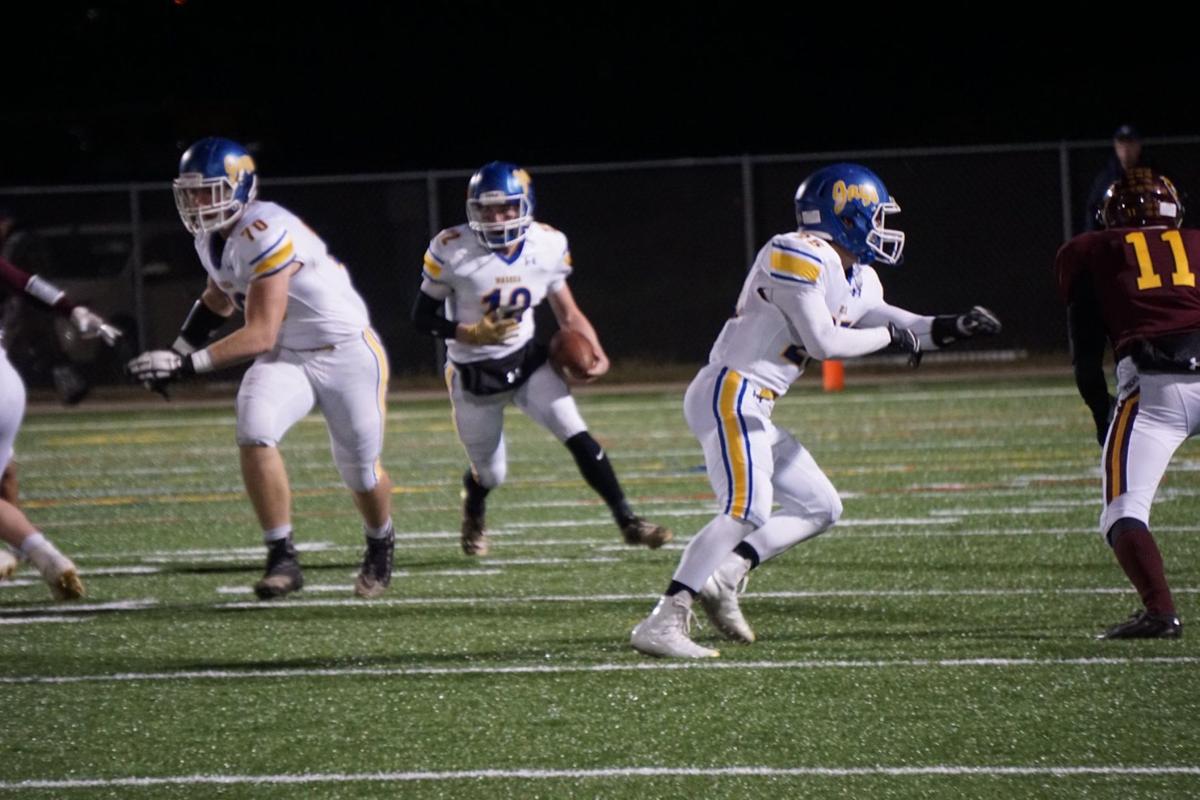 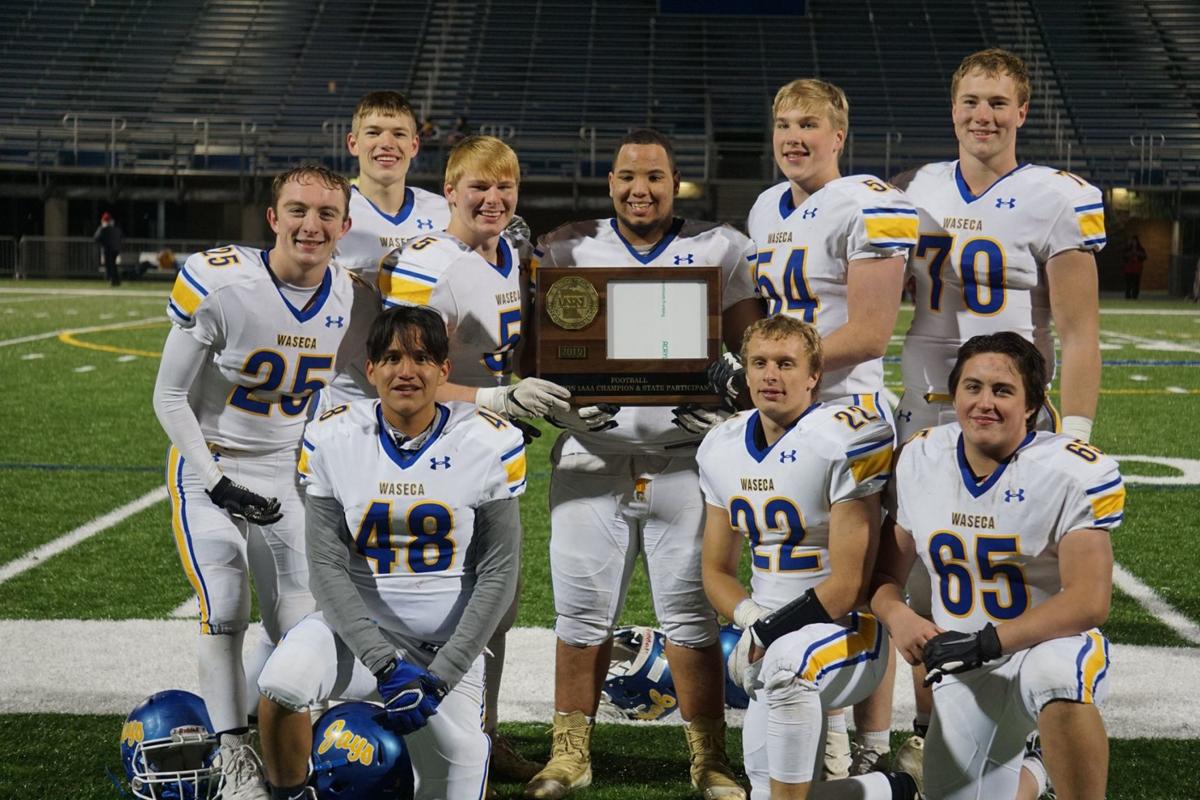 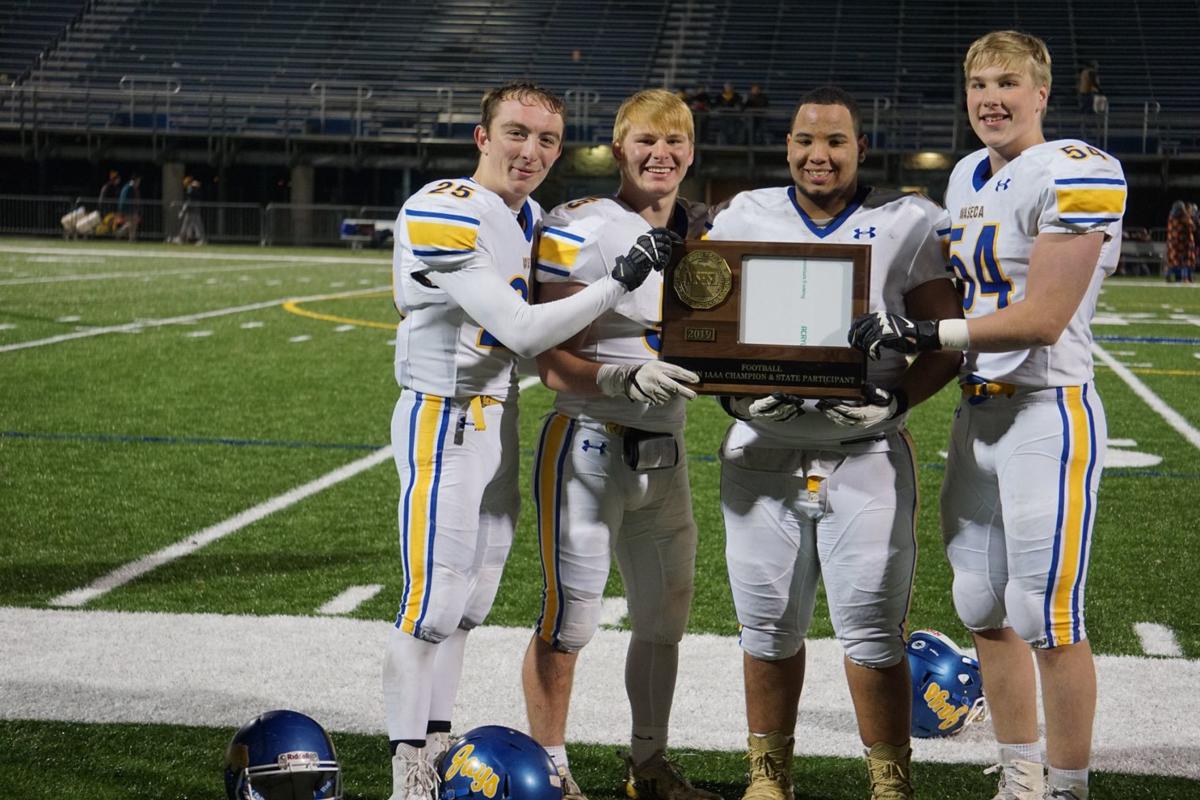 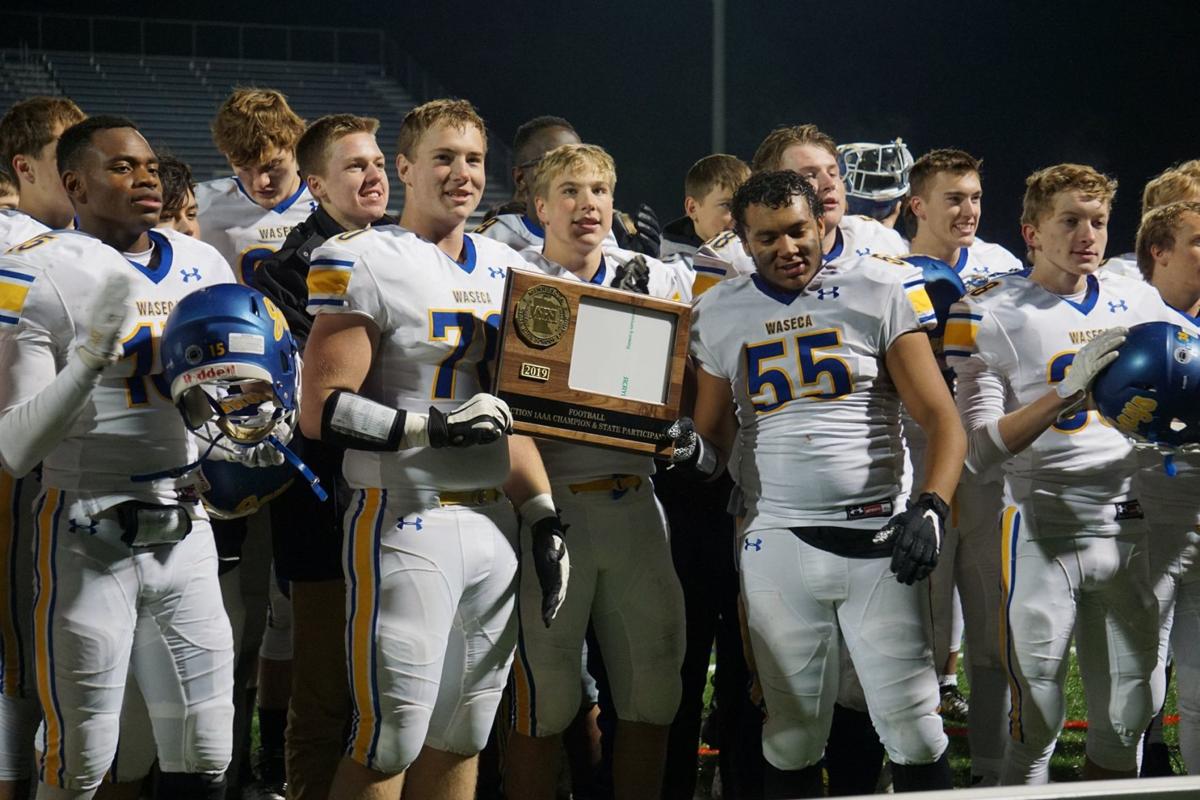 Waseca celebrates another touchdown en route to their victory over No. 1 seeded Stewartville in the section championship game. (Photos courtesy of Barb Hansen)

Waseca is now 7-2 on the year following their victory over Stewartville. (Photos courtesy of Barb Hansen)

Waseca advanced to the section championship game after defeating Rochester Lourdes at home in the semi final game.

Friday was a night to celebrate for the Waseca football team as they clinched the Section 1AAA title with a 42-20 win over No. 1 seeded Stewartville in Rochester.

The Bluejays have now punched their ticket to the state tournament for the second straight year.

“Our captains really pushed us to stay focused all week and never take one play off. They were a huge part in the big win this week. Also our sophomores really try their hardest on scout to give the best look and that helps a lot,” said Jays quarterback Ryan Dufault said.

The Bluejays, the No. 2 seed, controlled the majority of the game and played ahead throughout. Dufault connected with Tave Ball for a big gain in the first quarter that helped jumpstart the Bluejays’ first touchdown drive. Dufault used that momentum to keep the drive alive and scrambled for another gain which brought the team down to Stewartville’s 22-yard line. Dufault used his legs to extend a play and helped put Waseca in red zone territory after he launched a pass to junior Kyreese Willingham that was caught at the 2-yard line, which set up a first and goal opportunity.

Dufault continued the hot drive which resulted in a quarterback keeper for a 2-yard touchdown. After Shaun Hulscher put together a successful PAT the Bluejays were up 7-0 with 6:40 left in the first quarter.

Stewartville made a costly error on their next drive and fumbled the ball on the Bluejays 31-yard line. Waseca was able to recover the ball with 3:39 left in the first quarter but they were not able to capitalize on the opportunity. The possession was killed quickly and the Bluejays were forced to punt. Waseca committed a costly error as well and after a bad snap on the punt the Tigers reclaimed the ball on the Bluejay 26-yard line with 2:25 left in the first quarter.

The Tigers faced a fourth-and-16 from the Waseca 20-yard line to begin the second quarter but were not able to convert after the Bluejays got a big sack to end the drive.

Waseca had the offense flowing on the next drive and after a scramble from Dufault he was able to get the ball onto the Tigers 34-yard line. Dufault connected with Willingham for a 18-yard touchdown reception with 9:13 left in the first half. Hulscher hit the extra point to make the score 14-0.

Stewartville began their drive and were at the Bluejay 39-yard line when Sam O’Brien came up with huge interception to give Waseca the ball back on their own 27-yard line. The Bluejays started the drive with 6:30 remaining in the half, and after another big gain from Dufault the team was knocking on the door at the Tigers’ 13-yard line.

Ball found the end zone after an 11-yard touchdown run that extended the lead to 21-0 after another extra point from Hulscher.

Down three touchdowns, Stewartville remained composed and began a drive that would close out the first half. The Tigers found themselves in a fourth-and-12 situation after Andrew Morgan and Marcus Hansen combined for a sack. Stewartville was able to work some magic and convert on the fourth down to keep the drive alive with 52 seconds left in the second quarter.

The Tigers kept driving and scored on a 1-yard run with 17 seconds left on the clock that shortened the lead to 21-7. Stewartville’s last drive to end the half went for 64 yards on 12 total plays.

“Everything was clicking for us last night, our offense was bale to execute on a lot of things and our defense was able to stop a very good stewartville offense,” Willingham said Saturday. “I feel pretty good going into the state tournament. We just need to stay focused and have a great week at practice and just get better as a team and do what we know we can do.”

The Tigers, fighting for their season in the second half, came out arms swinging in the third quarter. Stewartville began a nine-play, 61-yard drive that capped off with an explosive 34-yard touchdown run to cut the deficit to 21-13 after a missed PAT.

The Bluejays remained unfazed and began a drive of their own that ended with Dufault’s second touchdown of the night, a 9-yard run with 3:27 left in the third quarter.

Hulscher stayed perfect on the game after another successful extra point. The Bluejays ended the third quarter up 28-13, but kept their foot on the gas.

With urgency growing on the Tigers sideline, Stewartville went for it on a fourth-and-9 situation on the Waseca 34-yard line, but the drive ended after an incomplete pass and the Jays took over on downs. Waseca took advantage of the situation and Ball busted free for a 55-yard reverse touchdown with 10:08 left in the game. Hulscher stayed on point and hit the extra point to make the game 35-14.

“The offensive line did a great job again this week making big holes for our guys to run through and that led to our success in our run game as well as us getting some yards after contact,” senior Denver Daniel said. “Defensively we did a great job creating turnovers which were huge in how this game turned out. Sam O’Brien had a big pick and so did (Dravyn) Spies, we got some fumble recoveries and didn’t turn the ball over. Ryan did a great job throwing the ball tonight also. We are almost hitting on all cylinders tonight but I know we got more in the tank.”

Spies broke the hearts of Tiger fans and helped closed the door on any potential Stewartville comeback as he caught an interception on the next drive. Waseca drove downfield and put the exclamation point on the game after Daniel found the end zone on a six yard touchdown run with 7:25 left in the game. Stewartville scored late in the game with 1:39 remaining but it was far too late to mount a comeback.