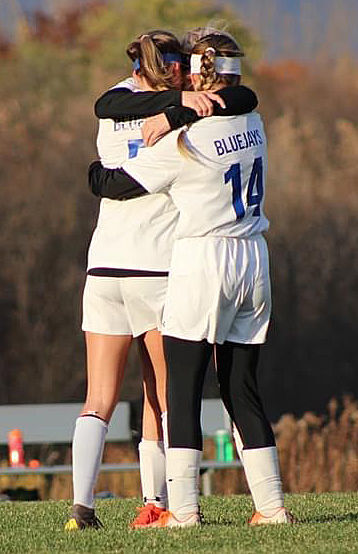 The Waseca girls soccer team wrapped up a 5-2-1 season Oct. 15 following a 1-0 loss to Southwest Christian in the second round of the Section 2A playoffs.

The Bluejays faced adversity this season when a COVID-19 case on the team postponed and canceled games for three weeks. Still, the team finished with a 4-1-1 mark in conference matches to finish second in the Big South.

Waseca opened the Section 2A tournament with a 4-0 win over Marshall. Priebe, Evelyn Nydegger, Ludwig and Rodriguez all scored in the victory. The season came to an end in the next round as Southwest Christian defeated Waseca 1-0.

“They have a lot of heart and you can’t buy heart at Walmart,” Waseca head coach JD Delgado said.

Ludwig and Priebe played integral roles in the midfield for the Bluejays.

“For every team you need the backbone and those two girls were holding the team,” Delgado said.

Hiller led the defense from her position on the right side and remained a vocal leader for the team as a captain.

“She was an outstanding right defender,” Delgado said. “She demonstrated maturity on when to tackle the ball.”

Rodriguez leaves the program as one of the all-time leading scorers. She’ll play next season at Gustavus Adolphus College.

Waseca came to rely on Hertzog in goal as she delivered clutch saves throughout her career.

“From what she was to what she is right now, she is an outstanding goalkeeper,” Delgado said. “She is the best we’ve had for a long time.”

Delgado appreciates what the seniors brought to the team throughout their years on varsity and knows they’ll be difficult to replace.

“This is one of the best groups of kids I’ve had in a long time,” Delgado said. “When we needed leadership they stepped up.”