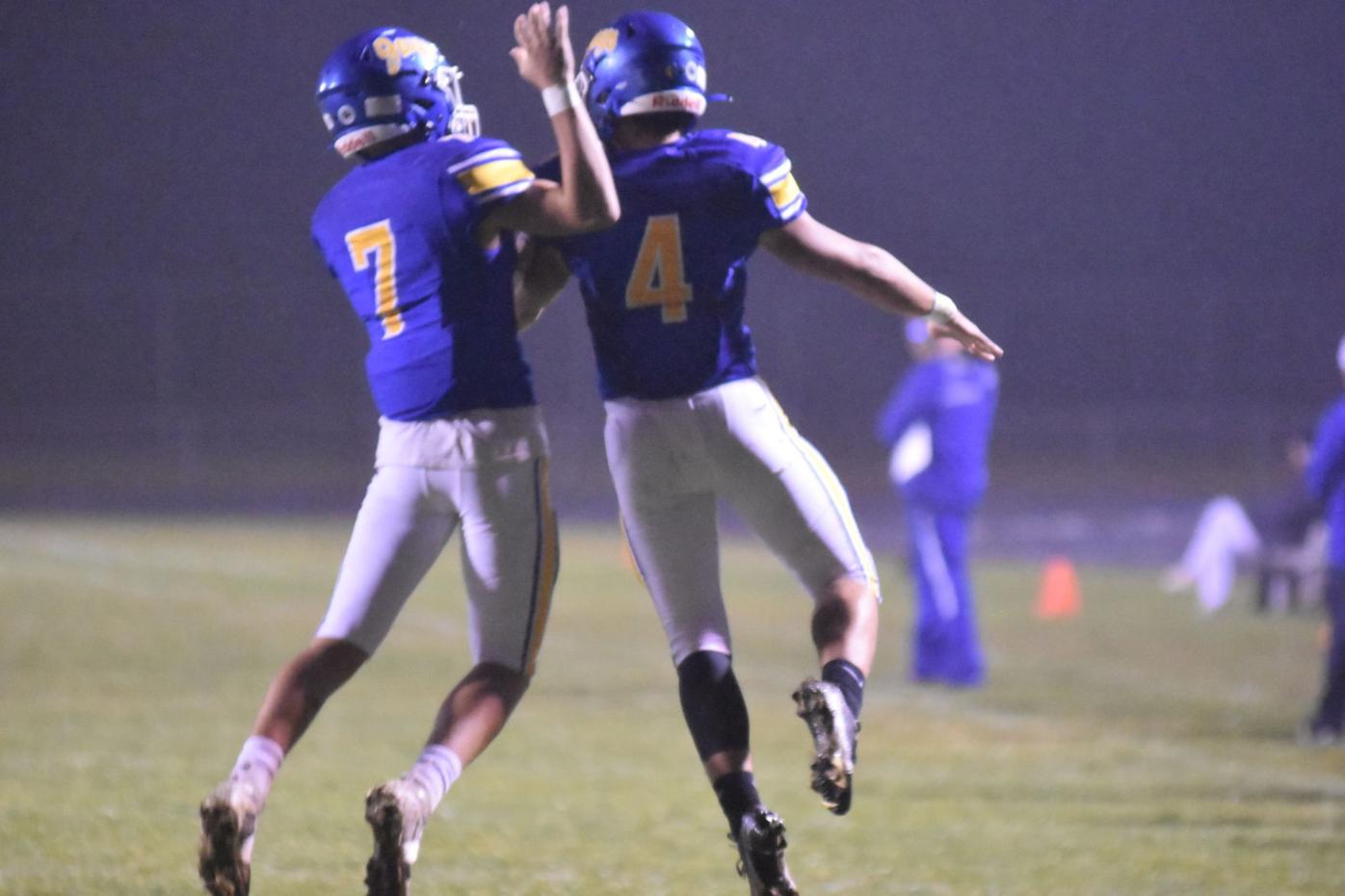 Waseca quarterback Oliver O’Brien (7) celebrates with running back Mason DeKruif (4) after DeKruif scored one of his five touchdowns against Luverne. (Stephen McDaniel/southernminn.com) 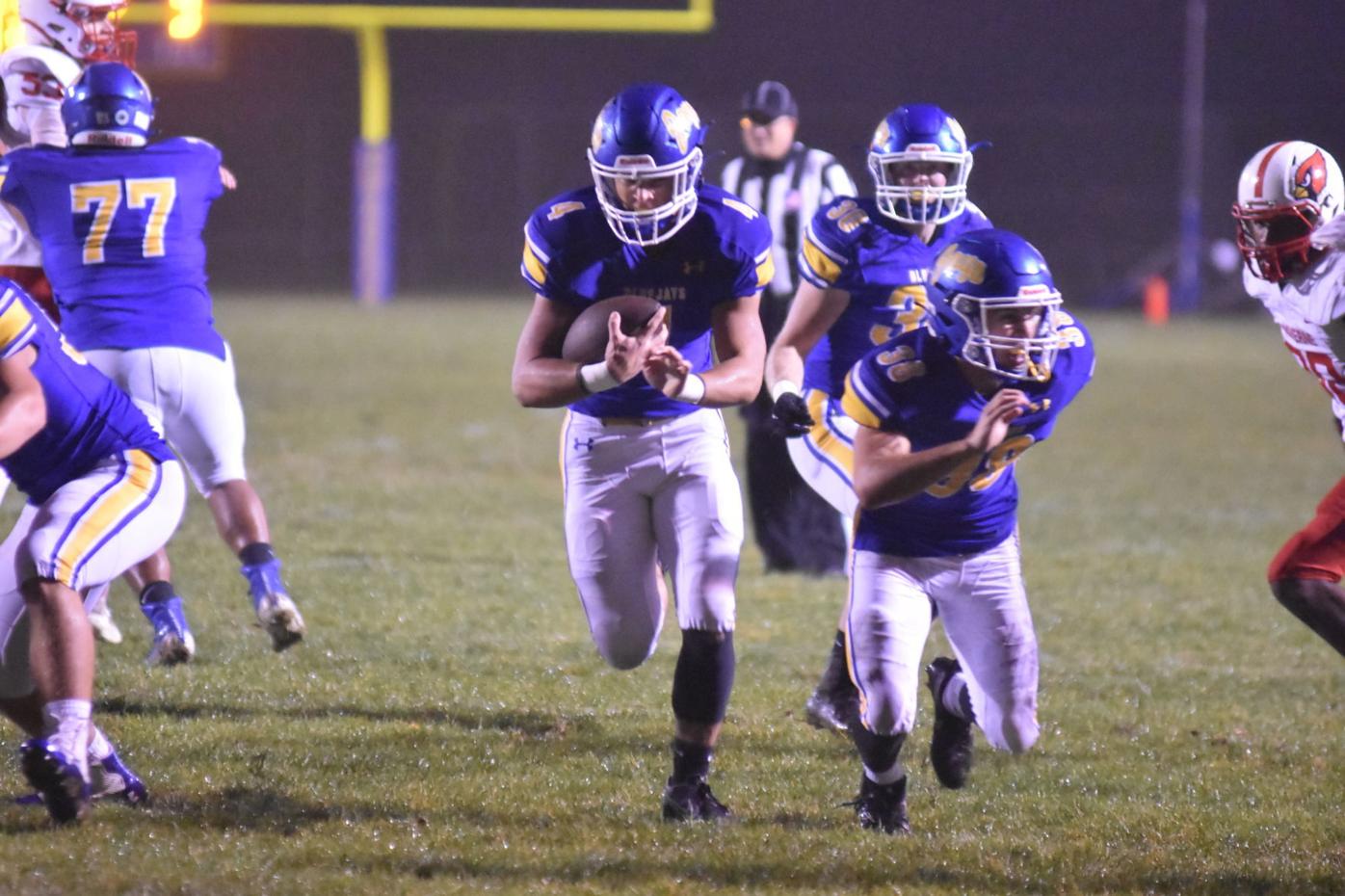 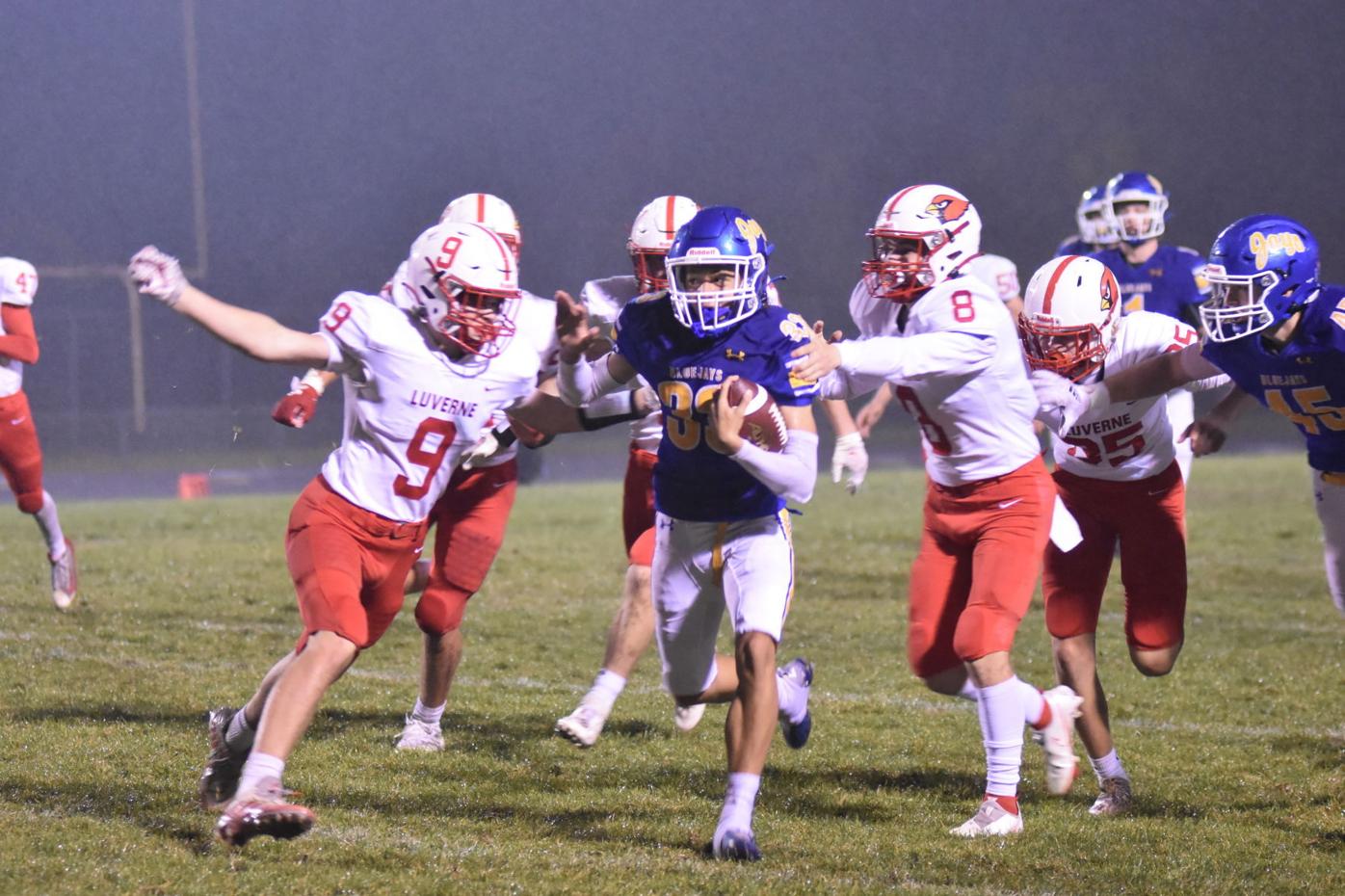 As mist, rain and any combination of the two made its way through Waseca Wednesday night after a cloudy, gloomy day, the Bluejays senior running back Mason DeKruif couldn’t have shined brighter, having a career day in Waseca’s regular season finale.

In a 34-0 shutout victory over the Luverne Cardinals, the senior running back scored all five of the Bluejays’ touchdowns, three of which came in the first quarter.

While DeKruif powered his way to five scores, his supporting cast on offense, defense and special teams played a big role in setting him up for success. On the day, DeKruif had nine carries for 94 yards out of Waseca’s 38 total carries for 319 yards.

Playing through wet conditions, due to the rain, both teams were forced to put a heavy focus on running the ball with an emphasis on ball security.

Junior quarterback Oliver O’Brien and running back Chrisitian Rodriguez helped do a lot of the rushing damage down the field. In the red zone, DeKruif would enter and find his way in for score after score.

Rodriguez recorded 91 yards on the ground off his 12 carry attempts, and O’Brien rushed for 82 yards off 11 carries. Kaeden Johnson also got involved with 53 yards off five carries, most of which came in the fourth quarter.

On the Bluejays’ first scoring drive, O’Brien and Rodriguez picked up chunk after chunk running the ball, which paved the way for DeKruif to score from 13-yard out for his first touchdown.

The momentum kept swinging in the favor of Waseca following the first score. On the ensuing kickoff, Luverne made an attempt to return the ball, which ended up popping out near midfield and the Bluejays were the first to recover the ball.

A few minutes following the kickoff fumble, DeKruif barreled his way from 4-yards out to put the Bluejays up 14-0 with just under five minutes left in the first quarter.

Special teams come up big for the offense a second time in the first quarter. After the defense did its job, holding Luverne to a three and out, freshman Damarius Russell returned the punt 49 yards into deep Luverne territory.

Russell’s big return on the punt put Waseca’s offense in prime distance to strike, which DeKruif was able to break out to the outside and rumble his way in from 19-yards out for touchdown No. 3 of the quarter.

DeKruif capped off another successful drive on offense early on in the second quarter when he punched the ball in from 5-yards out for his fourth touchdown.

Halfway through the third quarter, DeKruif broke off his longest scoring run of the day when he slipped past Luverne’s defense en route to a 30-yard touchdown, marking it as his fifth of the game and giving the Bluejays the 34-0 lead that they’d hold for the rest of the game.

The Cardinals weren’t able to come anywhere near the level of success on offense like the Bluejays had. As a team, Luverne posted 27 yards on the ground and 36 yards through the air for 63 total yards on the day.

Defensively, Waseca was led by a nine tackle performance from Jack Nelson, followed by eight tackles from Derek Bakken and seven tackles from Brendan Brown. If the five rushing touchdowns weren’t enough, DeKruif and fellow junior linebacker Max Neaves combined for a sack.

No. 2 seeded Waseca will host No. 7 seeded Belle Plaine in the first round of the Section 3AAA playoffs Tuesday.