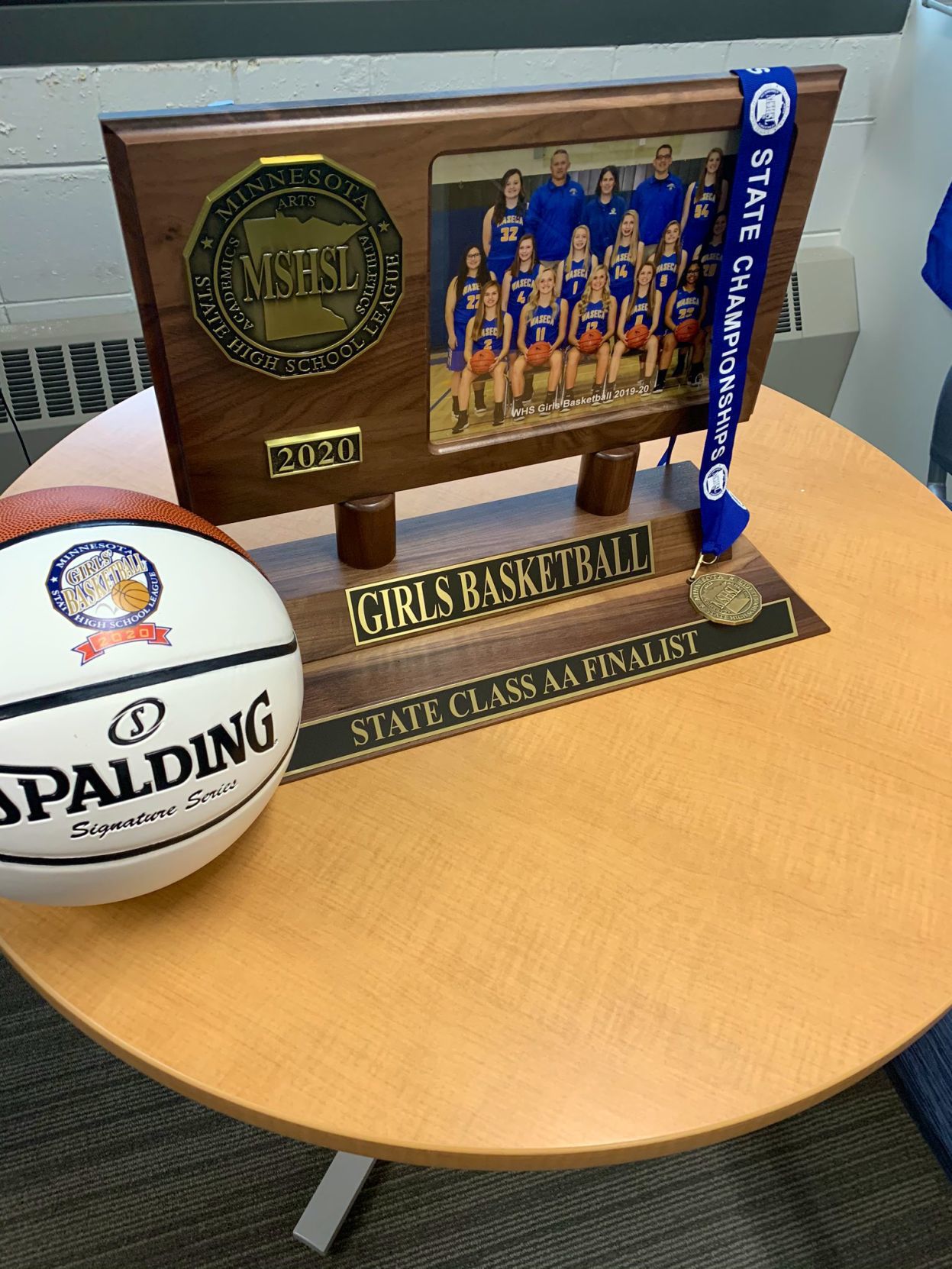 Waseca received a trophy, medals and a commemorative basketball from the 2020 Class 2A girls basketball state tournament. Each player has gotten to spend a day with the trophy. (Photo courtesy of Waseca Activities) 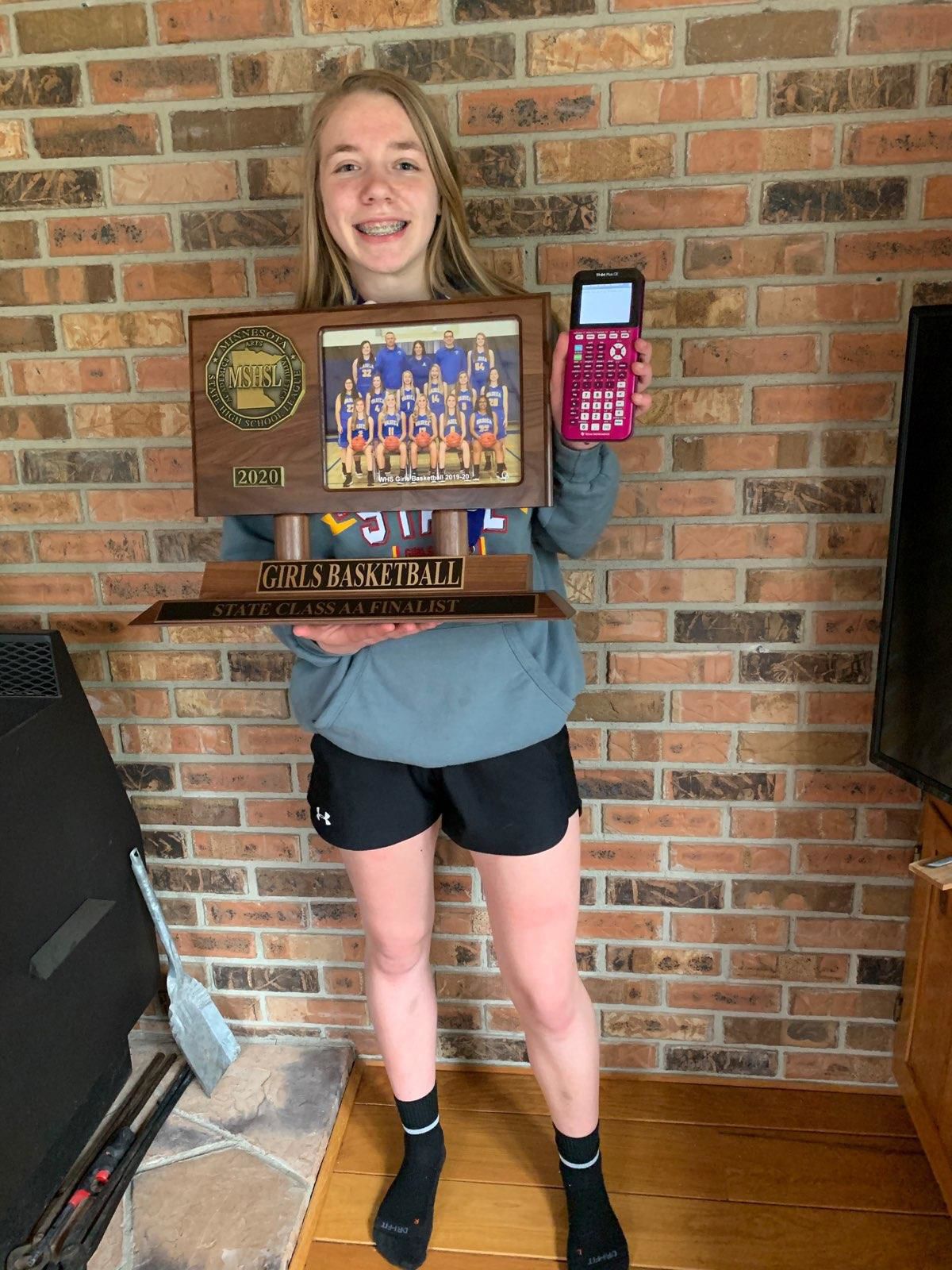 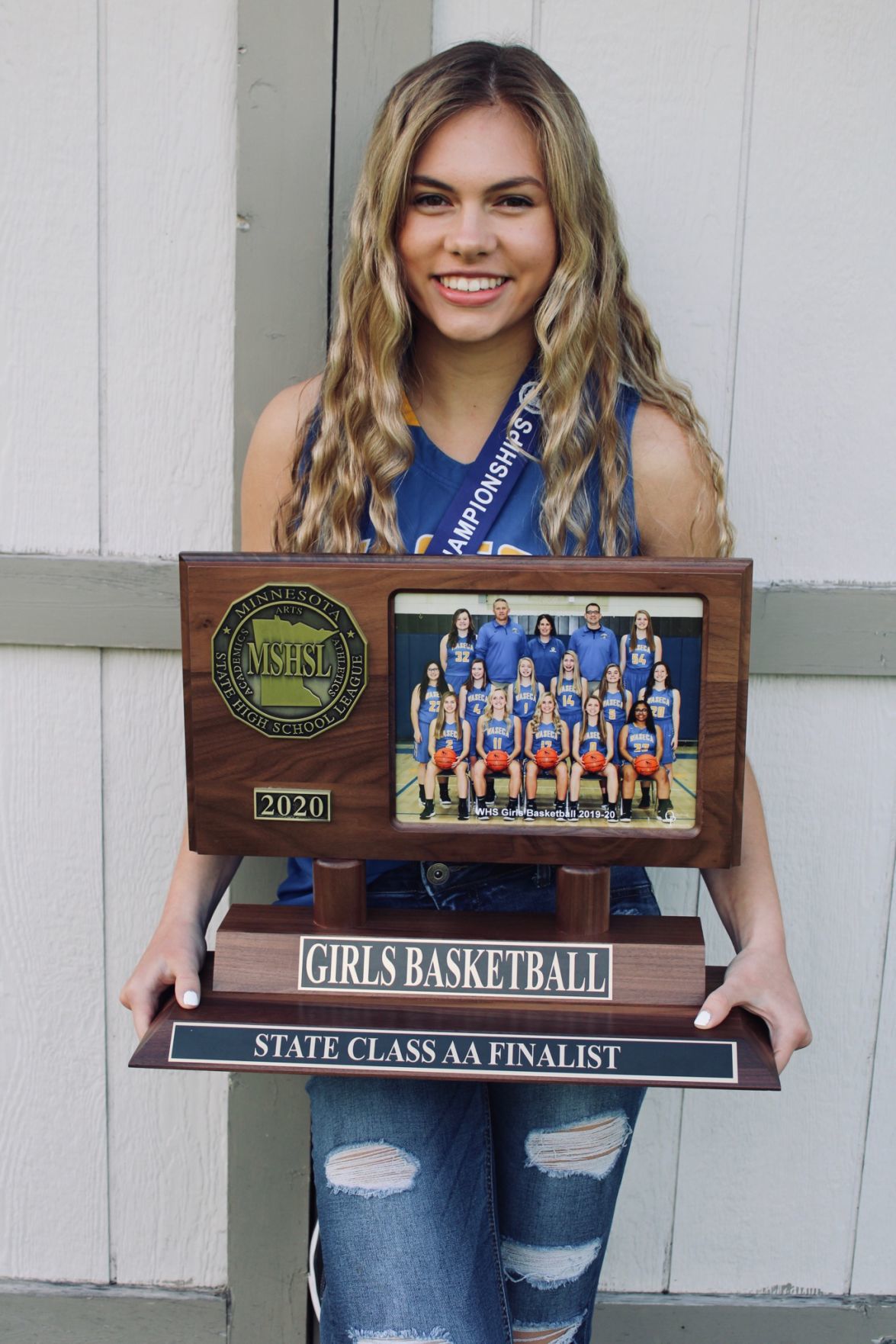 Waseca junior Gabby Rodriguez got a chance to celebrate the girls basketball season when she picked up the Class 2A state tournament trophy. The Bluejays are giving each player a day with the trophy. (Photo courtesy of Gabby Rodriguez)

Waseca received a trophy, medals and a commemorative basketball from the 2020 Class 2A girls basketball state tournament. Each player has gotten to spend a day with the trophy. (Photo courtesy of Waseca Activities)

Waseca junior Gabby Rodriguez got a chance to celebrate the girls basketball season when she picked up the Class 2A state tournament trophy. The Bluejays are giving each player a day with the trophy. (Photo courtesy of Gabby Rodriguez)

Social distancing isn’t allowing the Waseca girls basketball team to celebrate its state tournament appearance but each player on the roster is getting their day to celebrate the season.

The Minnesota State High School League awarded trophies to all teams that reached the state tournament before it got canceled in order to curb the spread of COVID-19. Waseca Activities Director Joe Hedervare received the trophy, medals and a commemorative basketball May 1 and had the idea to let each team member have a day with the trophy, similar to the Stanley Cup tradition.

“I can tell you it’s very much appreciated,” Bluejays girls basketball head coach Joan Conway said. “I think the kids appreciated it.”

Getting a day with the trophy came with a cost, though. Players had to turn in their practice and game uniforms when they returned the trophy, since there hadn’t been an opportunity for them to return their gear.

The team has been passing the trophy onto the next person in numerical order of their jersey number.

Junior guard Brittney Draeger’s day with the trophy was extra special because she received it on her 17th birthday.

“I thought that was pretty cool,” Draeger said. “I think it’s unfortunate that we can’t spend the day together to see the trophy. This is the best way for us.”

The players return the trophy to the high school office along with their gear after their day is up and the next teammate later comes by to spend the day with the trophy.

“It was a little sad having it cut short and not knowing how far we would’ve gone,” said junior guard Gabby Rodriguez, who received the trophy after Draeger. “The trophy was pretty nice to have and be a representation of the hard work the team has done.”

Waseca advanced to the state tournament behind a 32-28 win over Jordan in the Section 2AA championship. The Bluejays won their first-round state tournament game 38-22 over Pelican Rapids and were scheduled to face Rochester Lourdes in the semifinals before the MSHSL canceled the tournament.

“Gabby had a smile ear to ear,” Conway said. “Brittney had a hop in her step. It’s a cool thing for the kids and their families.”

The time with the trophy is giving players and parents an opportunity for photos that they usually don’t have much time to get following a game. Players have been sending Conway pictures of their day with the trophy and Conway has posted some on the Waseca girls basketball Twitter account.