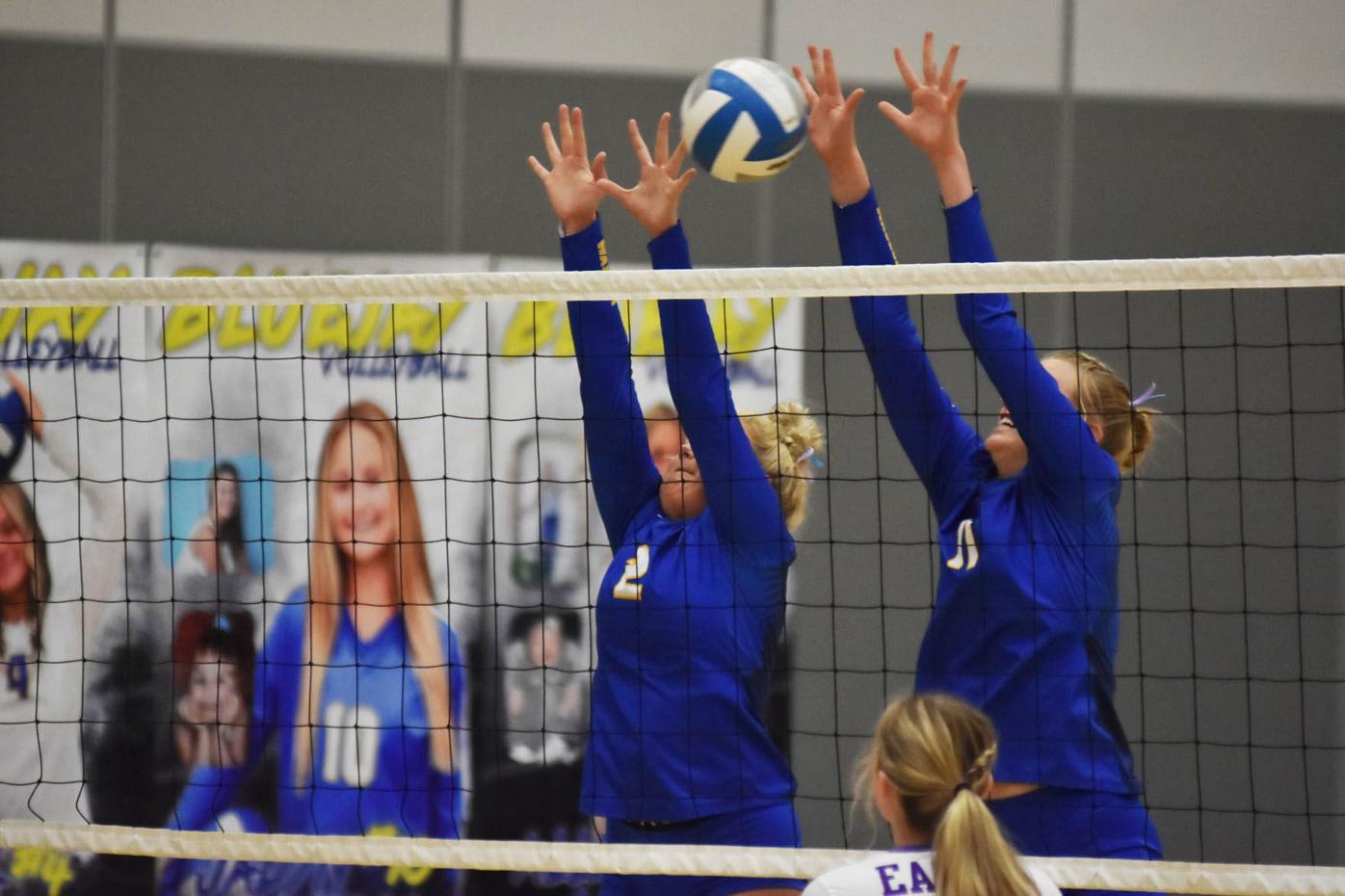 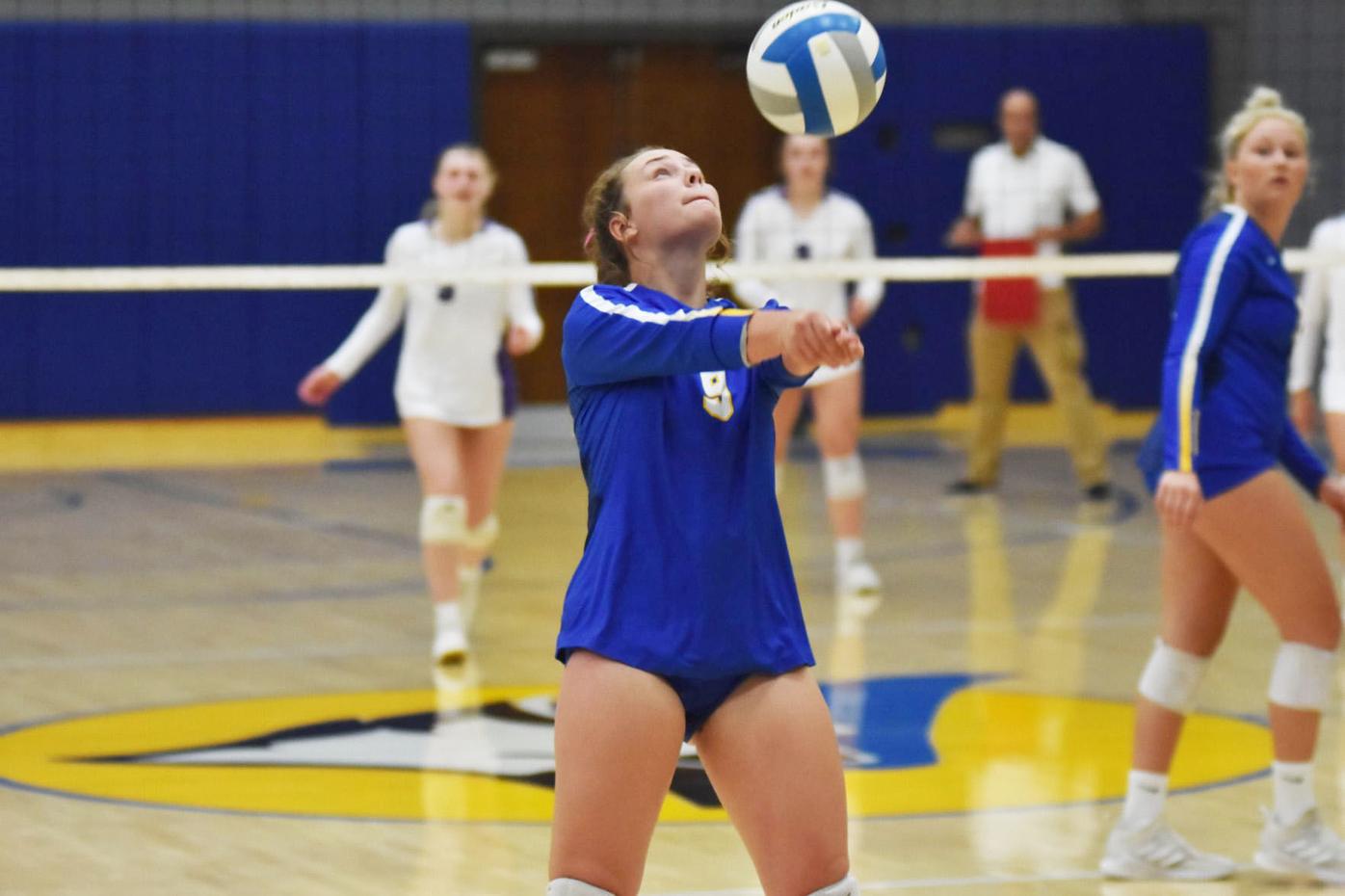 Waseca junior Haylee Sommers (9) attempts to hit the ball back towards the net. (Stephen McDaniel/southernminn.com) 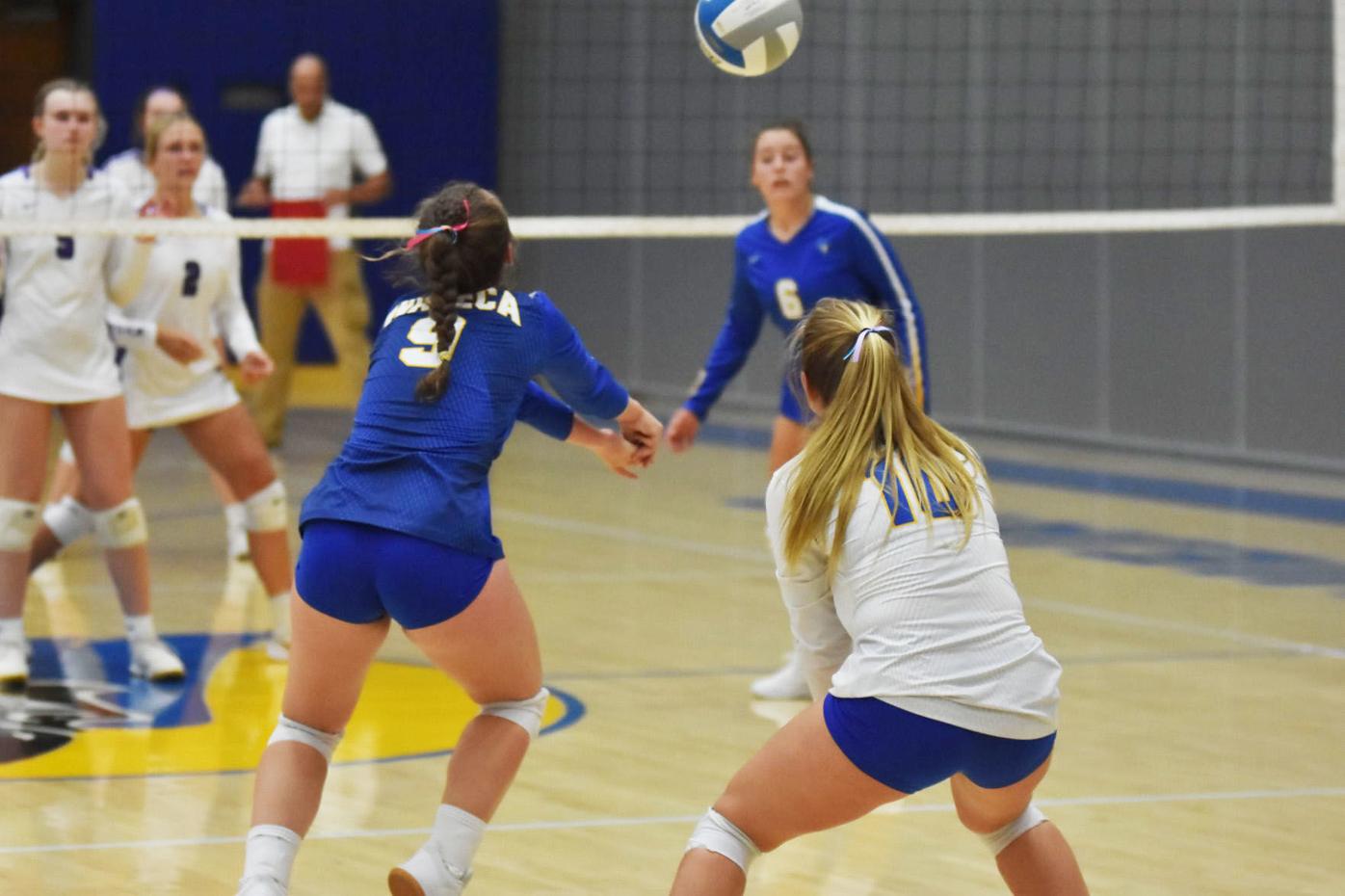 Waseca junior Haylee Sommers (9) and senior Jadyn Olsem (10) both prepare to hit the ball to help set up the Bluejays offense. (Stephen McDaniel/southernminn.com)

Late in the third set, the ref blew their whistle to signal that New Ulm wanted to call a timeout. Excitement flew through the Waseca Bluejays, whether it was the girls out on the court or the ones cheering from the bench.

The Bluejays had just tallied their 23rd point of a crucial third set and were now up 23-21 against the Eagles, forcing them to take a timeout in hope to calm Waseca’s momentum after it battled back and forth to take the late lead over New Ulm thanks to a big block by Kloe Wadd, who led the team in kills (5) and blocks (3).

If the Bluejays could get two more points, they’d win their second straight set against the Eagles and take a 2-1 lead heading into a potentially decisive fourth set with all of the momentum.

Out of the timeout, Waseca quickly finds its 24th point, just needing one more to secure the third.

In the most important point of the match, the ball gets touched over the net to the Bluejays side for what should be an easy set up. Two separate Bluejays call for the ball, but then both back off to let the other get it, resulting in the ball dropping in front of them for an Eagles point.

This little communication miscue by Waseca formed a small snowball that would gradually increase and ultimately end up costing the Bluejays the match in their 3-1 loss to New Ulm.

“It’s defeating,” Hauger said. “It could be defeating to any team. You’re up that late in a set, looking pretty good, it’s going to go in your favor, and you let that lead go, and you end up falling. It hurts.”

Now with a 24-22 score, the Eagles started to battle back. They were able to take advantage of the Bluejays pressuring themselves, as the home team reached for that final point. The result was Waseca hitting the net or hitting the ball out of bounds.

In a blink of an eye, New Ulm tied the set 24-24. One more blink, and the Eagles took a 25-24 lead. Waseca went from being in control of the set and match to struggling to get its offense flowing again. With a third blink, the Eagles threw their arms up in celebration, as the Bluejays miscues allowed for New Ulm to take the third 26-24, rattling off five straight points in the process.

The snowball that formed off the small communication miscue picked up the pace and after allowing the Eagles to comeback and steal the third set to go up 2-1. With New Ulm taking that momentum into the fourth, it started to become too much to handle.

The Eagles held control of the match, and it was evident based on its hot start in the final set, forcing Waseca to burn one of its only two timeouts after going down 8-3, which was taken by Hauger in an attempt to rally the troops in a must-win set.

“Hey, who wants it? We got to wake up, let’s go,” Hauger said. “We got to bounce back and find a way. Just got to light a fire underneath of them basically.”

Despite their early timeout, the Bluejays couldn’t mentally overcome the miscues and mistakes made following the start of their third set collapse. Waseca was forced to burn its last timeout halfway through the fourth, now trailing 16-7.

The Bluejays were able to get some points off of errors from New Ulm, but it was too little, too late, as the Eagles were able to maintain their play and seal the fourth set 25-13.

Haylee Sommers stayed busy with a team-high 10 digs, along with one ace. Tricia Cox was right behind her with eight digs.

Outside of Wadd's five kills, Aliyah Taylor had the second most kills for the Bluejays with four. Sophie Potter and Siri Kuhns recorded 16 assists combined, with nine coming from Potter and seven coming from Kuhns. Avery Madsen recorded two aces while serving and one block defensively.

Waseca went from on the verge of taking the match over on its home court to falling behind and struggling to find success in any of the things that won it the second set 25-18 or what helped it battle through and take a late lead on the third set before falling behind.

“We were in the match for the most part, but mental errors and not communicating clearly kind of caught up to us and really hurt us,” Hauger said. “Other than that, I feel like, for the most part, we put up a good fight — except for that fourth set.”