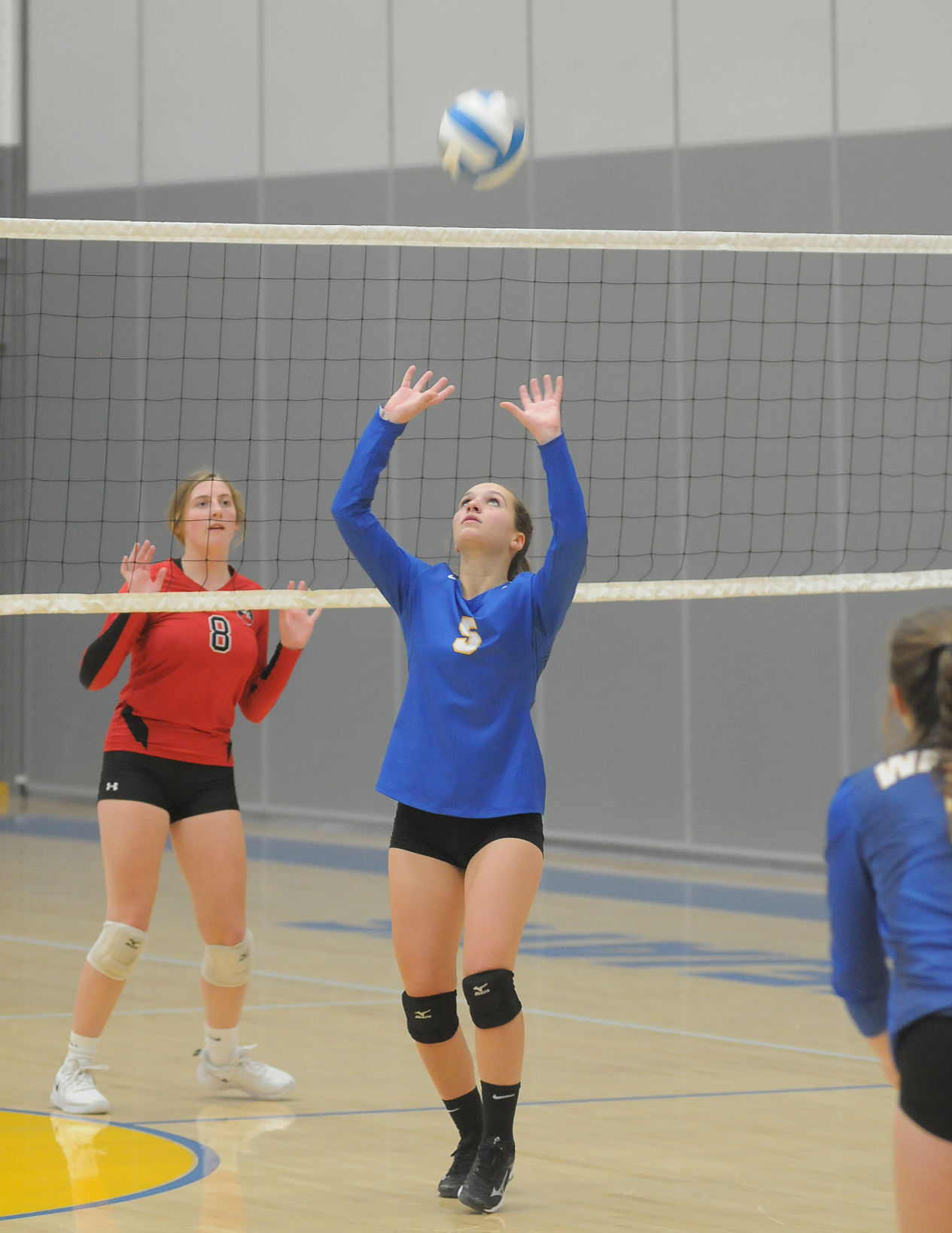 Waseca senior setter Megan Nelson puts up a set against St. James Area earlier this season. Nelson led the Bluejays in assists with 200 assists and 132 digs in becoming the Waseca County News’ All-Area Volleyball Player of the Year. (Nick Gerhardt/southernminn.com) 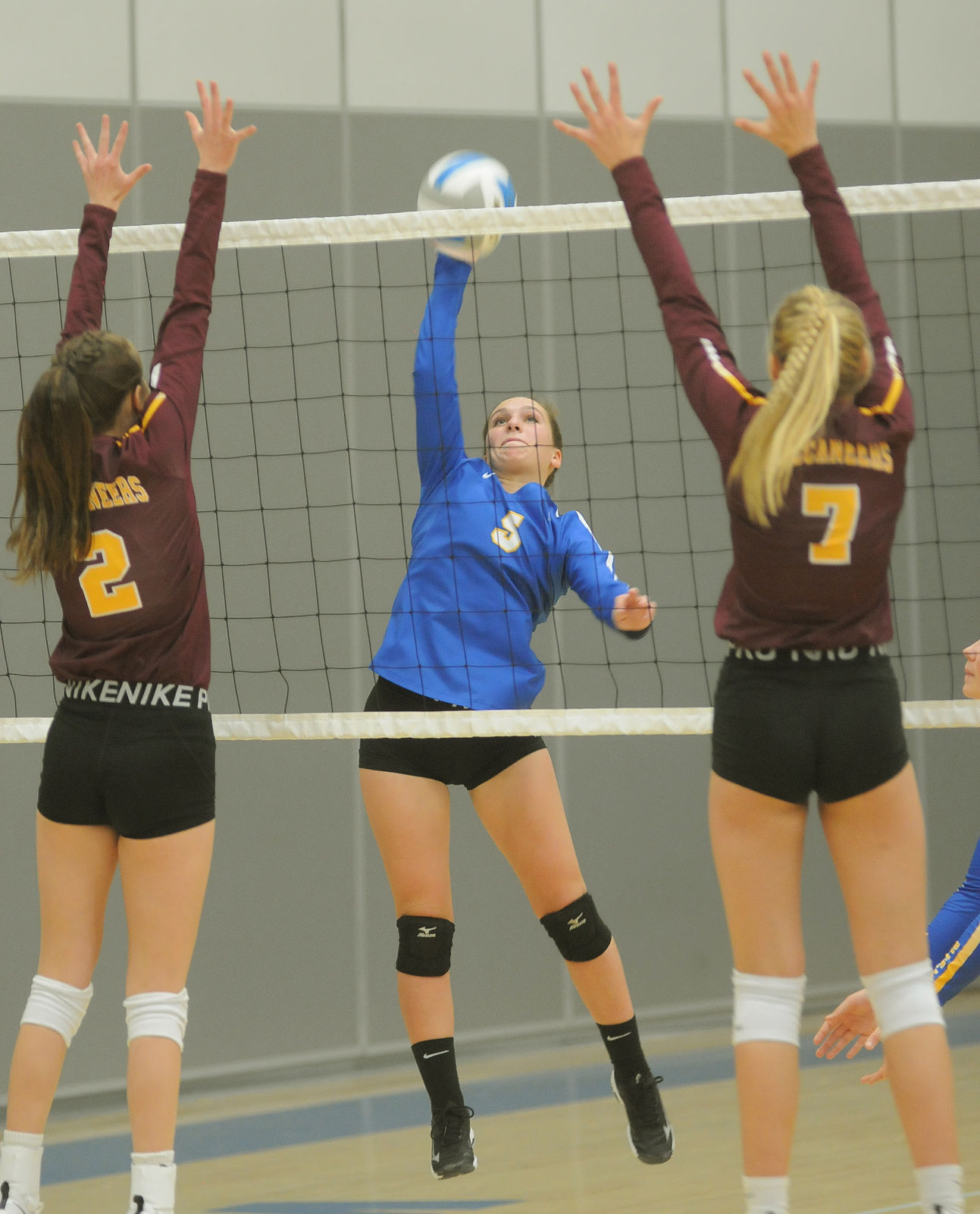 Waseca senior setter Megan Nelson puts up a set against St. James Area earlier this season. Nelson led the Bluejays in assists with 200 assists and 132 digs in becoming the Waseca County News’ All-Area Volleyball Player of the Year. (Nick Gerhardt/southernminn.com)

When a team experiences the type of roster turnover Waseca saw this season it naturally needs a leader. The Bluejays had senior setter Megan Nelson.

The setter position naturally sets up as the team’s chief communicator and it’s also one that fits Nelson’s personality. The setter has to learn the preferences of each hitter to put them and the team in a position to succeed. That perfectly suits Nelson.

“I think the setter is such a fun role on the team because you get to be that link between your hitters,” she said. “I love when you get to set someone and they get a kill.”

Nelson’s role as a facilitator and skill as a setter made her the choice for the Waseca County News’ All-Area Player of the Year.

Nelson, a two-time Big South Conference all-conference honoree, did her job with zeal and did it well. She racked up 1,000 career assists by the end of her junior year. She finished her career with 1,227 assists, 200 of which came this season. Nelson also had 503 career digs and led Waseca this season with 132.

As uncertainty about the 2020 high school season swirled during the summer and into early fall, Nelson’s passion for the game led her to seek out any court she could find. She landed a spot with the club team, Minnesota Attack, out of Mankato, even though it meant playing a different position. Nelson welcomed a move to libero, in part, because she got to learn more about passing, which could help her setting. Nelson hadn’t had much opportunity to pass out of the back row the previous two seasons.

“She just has those natural soft hands that every coach drools over when looking for a setter,” Hauger said.

Nelson moved up to the C squad as an eighth-grader, then landed on varsity for a few matches as a freshman. She took over as the team’s setter in her sophomore year.

“She runs our offense,” Hauger said. “She has to be extremely knowledgeable on the hitters’ needs. She’s just a smart player.”

The reward for Nelson lied in setting up others, growing their confidence and building relationships with teammates.

Nelson also stars on the golf course and has appeared in the state tournament. She’s considering pursuing the game collegiately, though it’ll have to fit in with her academic priorities. Nelson’s considering a biology major on a pre-med route to becoming a doctor.

Camryn McQuery, Waseca, senior OH — McQuery led the Bluejays with 89 kills and became a go-to option when the team needed a big point. McQuery also added 29 digs and was named to the Big South All-Conference team.

Mara Richardson, JWP, junior S/OH — In her first year as a varsity starter, Richardson made an impact. She led the team with a .178 hitting percentage, had 111 assists, finished third in digs and had 21 ace serves for second most on the team. Earned an all-conference selection in the Valley Conference.

Sydney Gahlon, JWP, junior OH — Gahlon also became an integral part of the Bulldogs lineup this season in her first year as a starter. She finished second in digs with 64, third in hitting percentage and fourth in ace serves and kills. Received all-conference honorable mention recognition.

Andra Armstrong, JWP, junior L — Armstrong completed her third season as the team’s starting libero and led the Bulldogs with 84 digs and came in as No. 1 in serve receiving. Armstrong was named all-conference honorable mention in the Valley Conference.

Sophie Potter, Waseca, junior S/OH — Finished second on the team with 103 assists while providing 61 digs and 27 kills. Missed time at the end of the season due to injury.