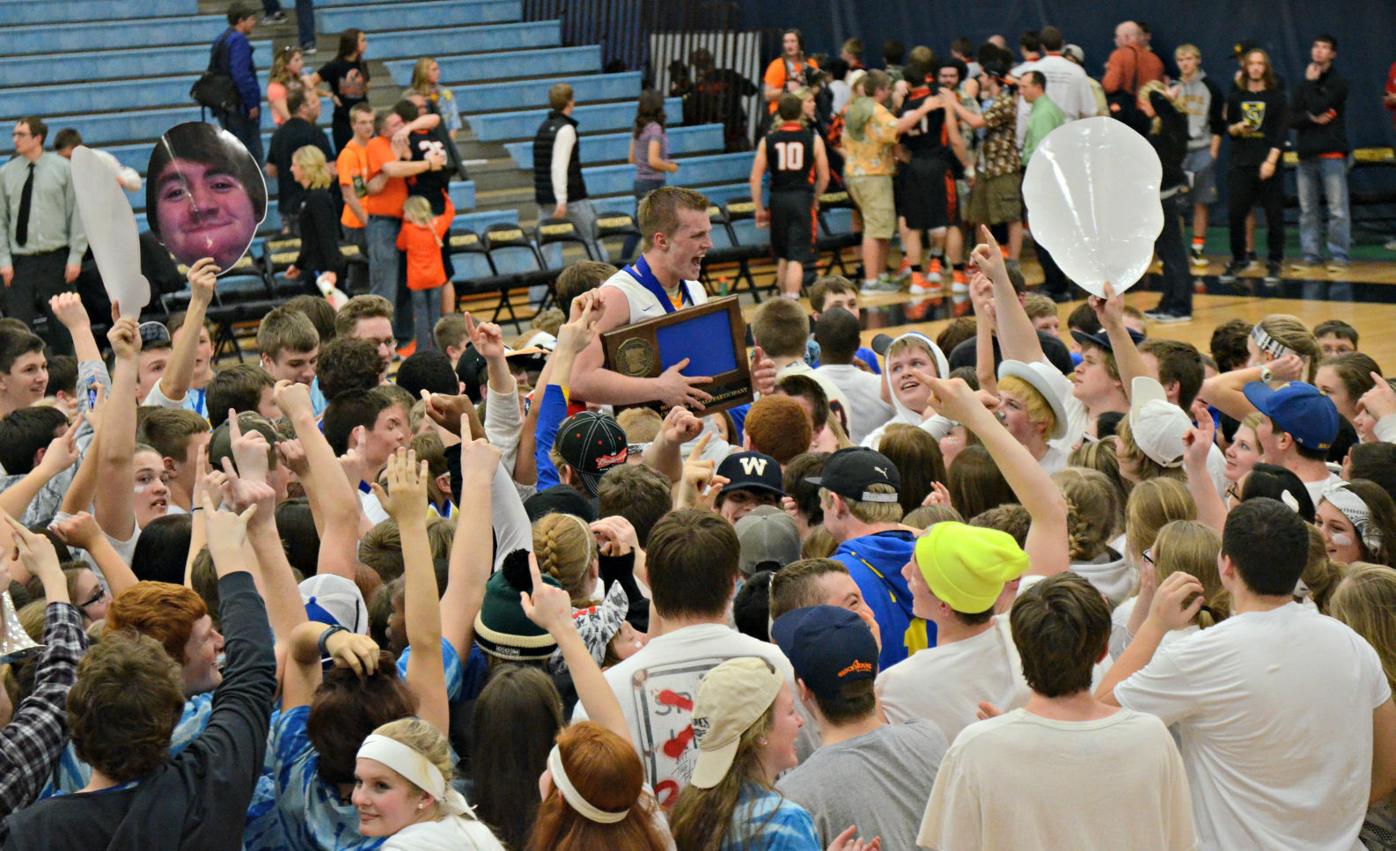 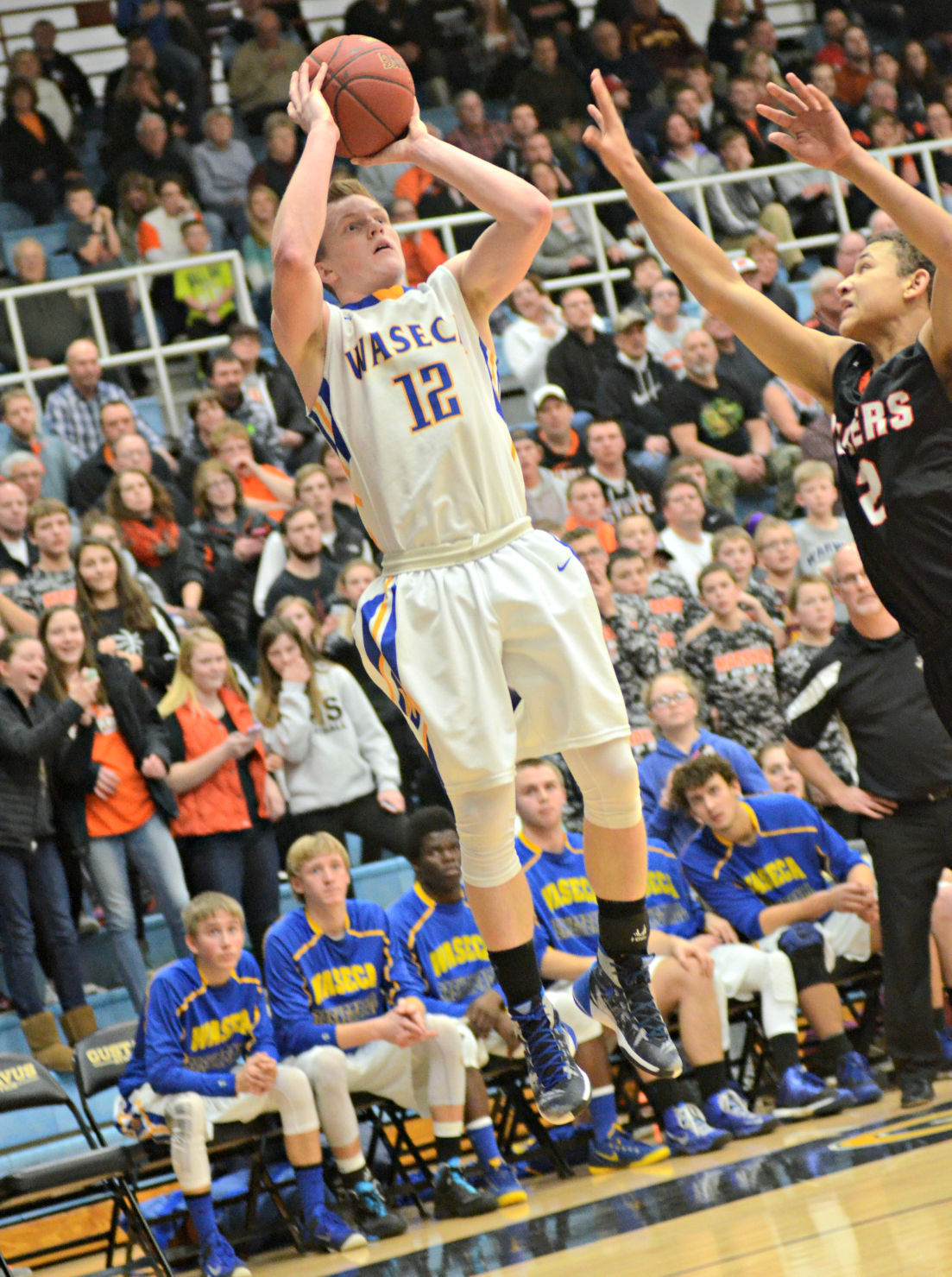 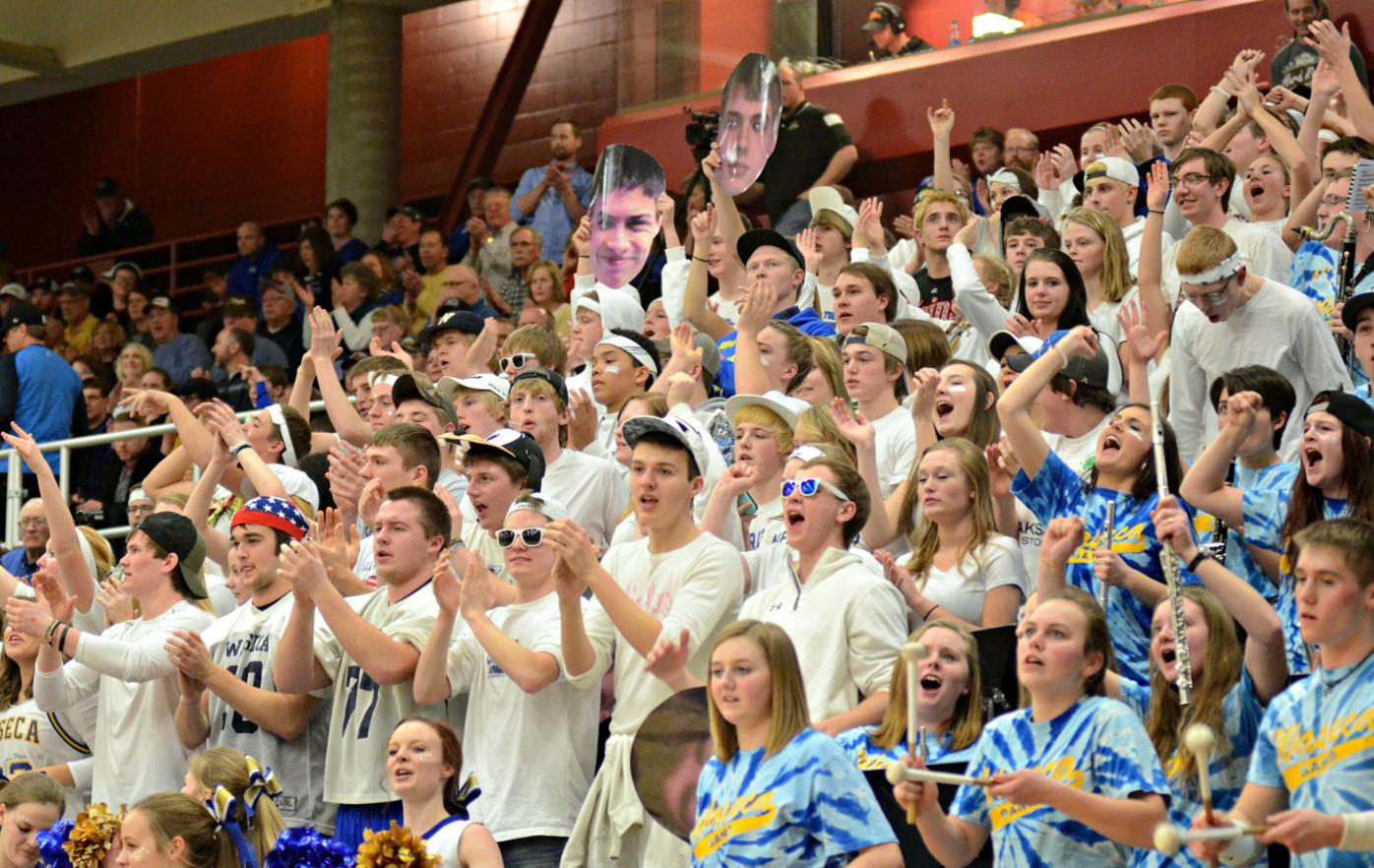 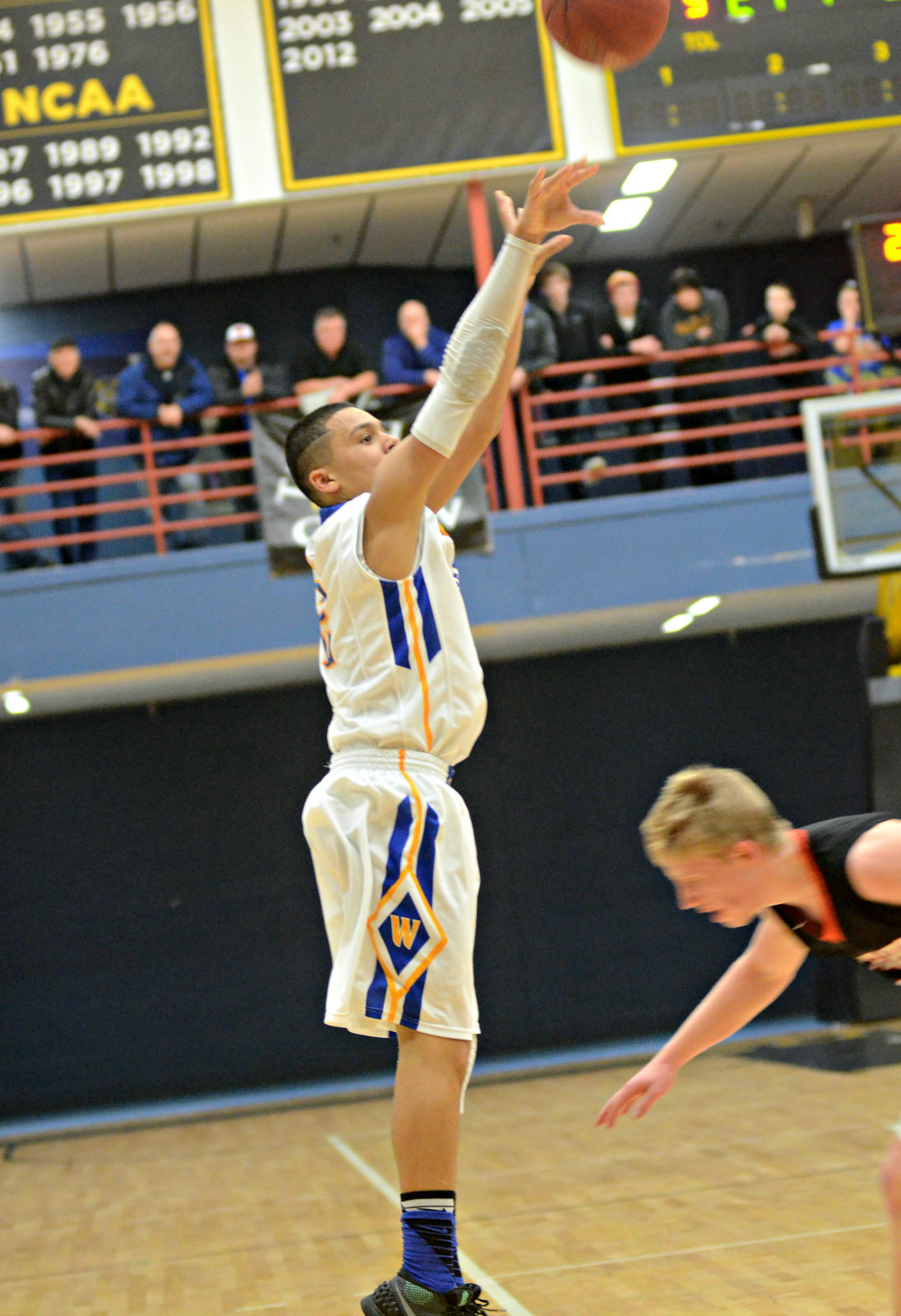 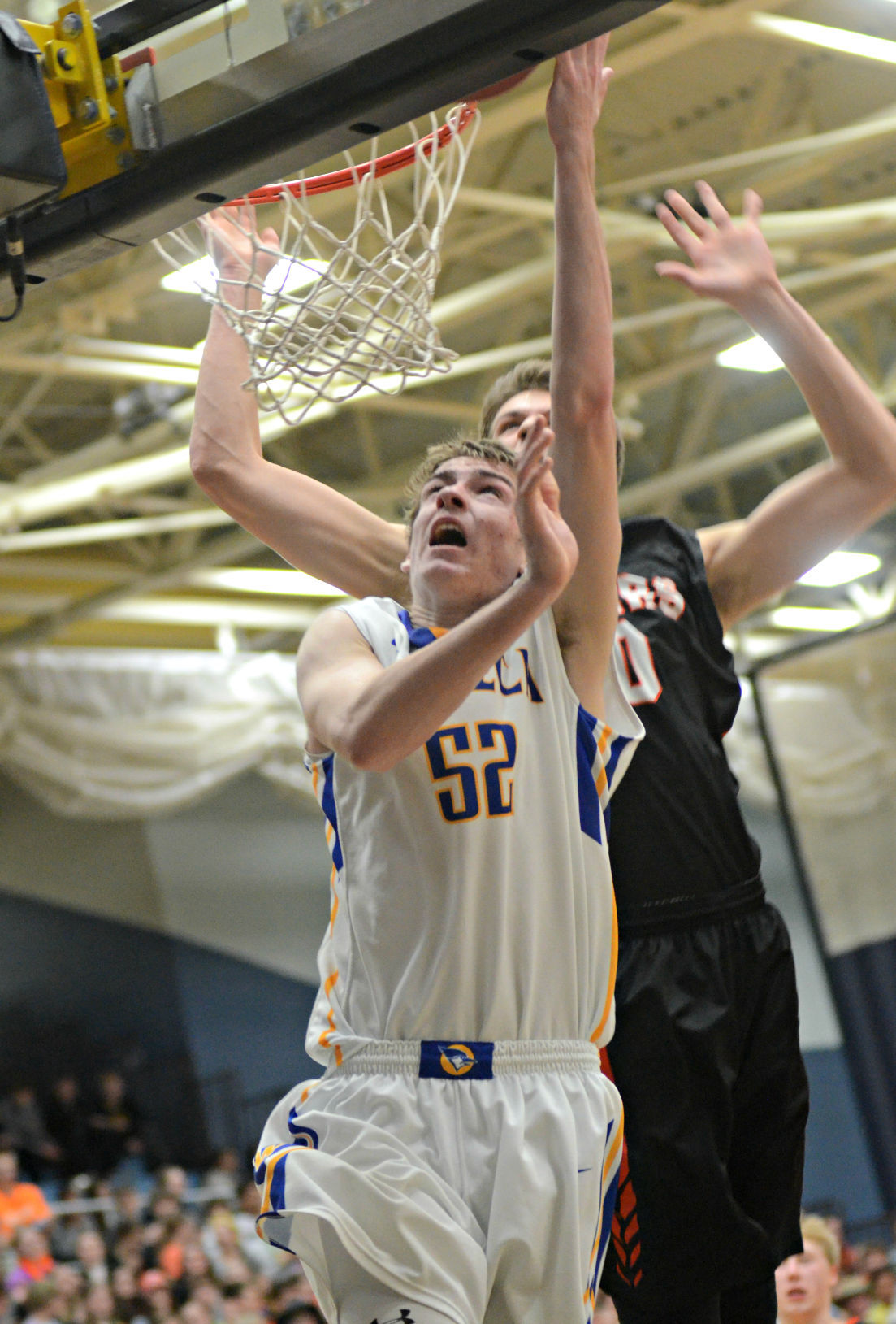 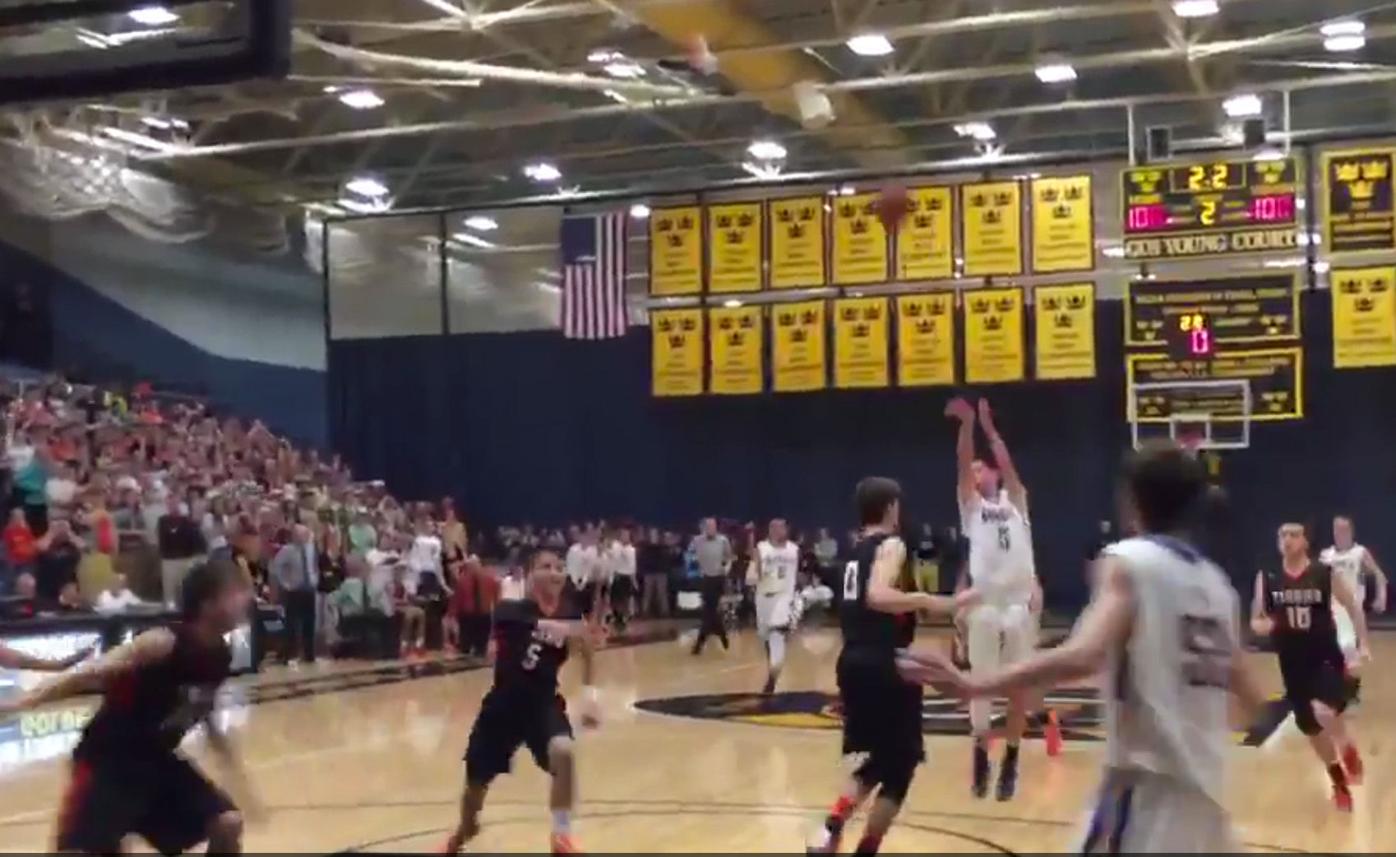 Update 9:30 a.m. Friday: This story has been updated  to include embedded videos at the bottom.

It was the greatest game ever played.

With all due respect to the 1958 NFL Championship Game, Waseca and Marshall’s Section 2AAA title game Thursday, earned the moniker.

Not one, not two, but three buzzer beaters. Four overtimes. Clutch free throws and missed free throws. The likeliest of heroes and perhaps the unlikeliest. There are only so many ways to describe the bananas-type of game it was. And somehow, through the highest of highs, and lowest of lows, Waseca came out on top, 103-100, because of a running, leaning 3-pointer from Cole Streich.

Tied 100-100 with seven seconds remaining, Streich took the ball the full length of the court, and without hesitation, shot an open 3-pointer that he knew was good the moment it left his hand. Streich beat the buzzer and after three hours and four overtimes, the Bluejays are headed to state.

“It’s a definite blessing,” said Streich, who was at a loss for words.

Streich’s game winner wasn’t even the most unlikely shot of the night.

With one second left in the third overtime, Nick Dufault took the ball from the end line and heaved a prayer the length of the court. It was a "have to see it to believe it moment," because Dufault’s 80-foot shot dropped, sending the game into a fourth overtime.

“It was so surreal,” Dufault said of the shot. “I don’t know how else to put it, I’m so thankful.”

“When you’re down 3, there’s really nothing else you can do in that moment,” said Dufault. “It’s meant to be I guess.”

Once the senior connected, the Bluejays knew this game was theirs.

“We just had the confidence that this was our night,” freshman Malik Willingham said. “There was no way we were losing after that.”

All this coming after Waseca’s chances at state looked grim. Holding onto a 3-point lead in regulation, Marshall connected on a buzzer-beater of its own that sent the game into overtime.

“It was tough,” Streich said of the Tigers’ tying 3-pointer. “When you looked around in the huddle, it wasn’t looking good.”

While Dufault and Streich will go down as the heroes, it was the Bluejays’ supporting cast that stepped up throughout. Near the end of regulation, it was Elijah Carter’s offensive rebound on a missed free throw that led to a bucket, giving Waseca a 1 point lead late. In overtime, Carter grabbed a steal in the back court giving Dufault a chance for a successful 3-pointer.

“Talk about a team victory,” coach Todd Dufault said. “That’s why we’re going to state. The supporting cast. You can go right down the line of the guys that played tonight and they all came up with a big steal, a big rebound, a big shot. That’s why we were in a position to win.”

The last time the Bluejays advanced to the state tournament was in 2002 — with a victory over Marshall. In school history, Waseca is 8-1 in section final games.

“You work all season to get to this moment and I thought we played a perfect section tournament,” coach Dufault said “We peaked at the right time.”

Entering the game, Marshall was the fourth-ranked team in Class AAA with a 25-3 record while Waseca came in the No. 3 seed at 19-9.

“I’m so proud of this team,” said Dufault, who finished with a game-high 43 points. “These guys deserve this. We’ve worked so hard all year long and I’m just so happy for the team.”

Behind Dufault’s 43 points — including seven 3-pointers, all of which came after the first half — was Willingham with a career high 21 points. Streich added 11 — three of which came on the most important shot of his career.

“I knew I was probably one of the last options but I knew if I got my hands on it, I was taking it,” the senior said.

The first round of the Class AAA State Tournament is Wednesday at Williams Arena at the University of Minnesota.

Cole Streich delivered the final blow in the contest, drilling a pullup jumper with seconds on the clock to secure the Thursday night victory.

The shot wasn't even the most amazing of the game. Senior Nick Dufault sent the game into a third overtime with a full-court shot that rocked the Bluejays faithful who showed up to Gustavus Adolphus College in droves.