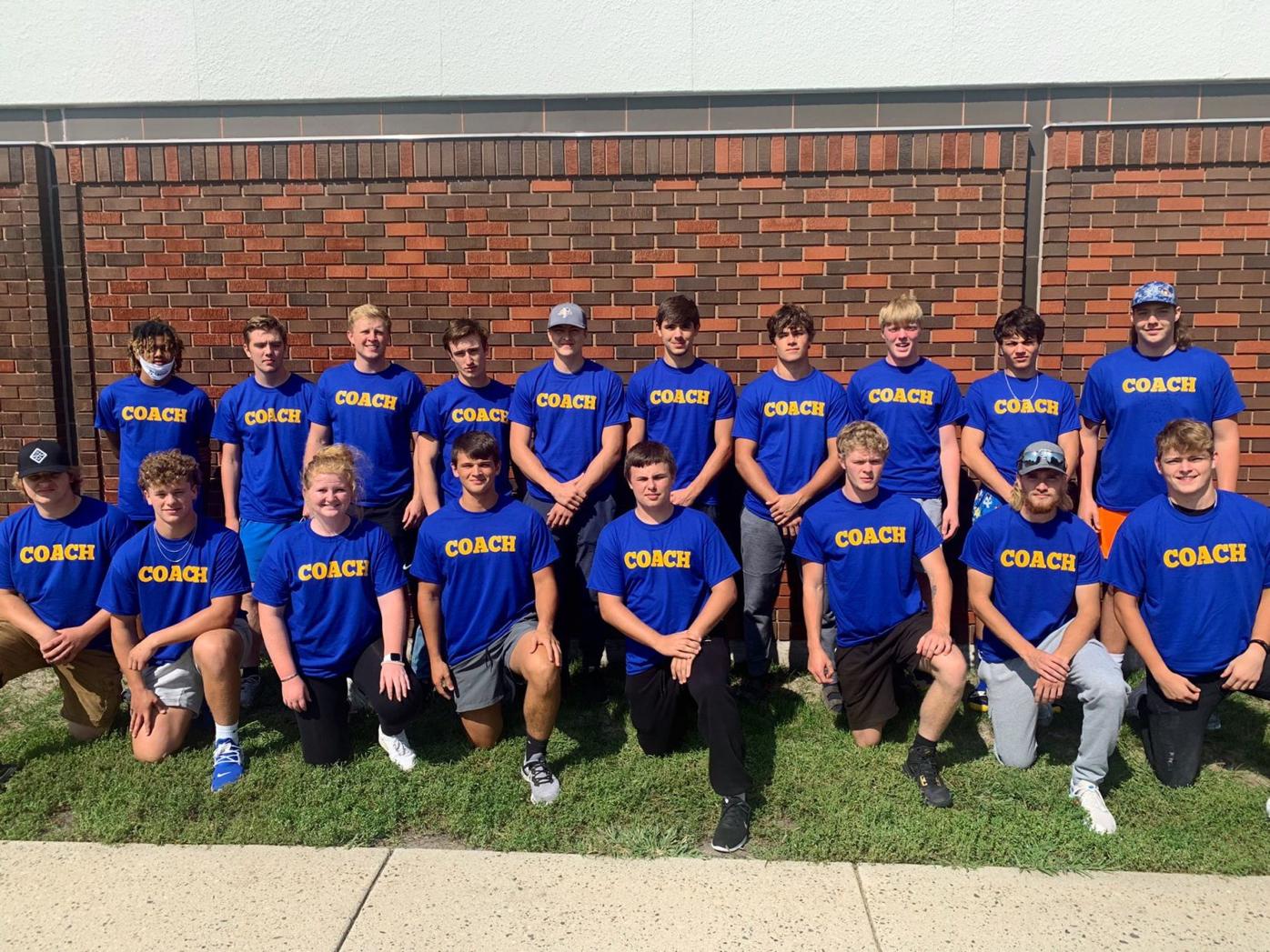 The Waseca Bluejays wore blue shirts labeled with “COACH” on the front and “WASECA STRONG” on the back in honor of head coach Brad Wendland. (Courtesy of WasecaBluejays/Twitter) 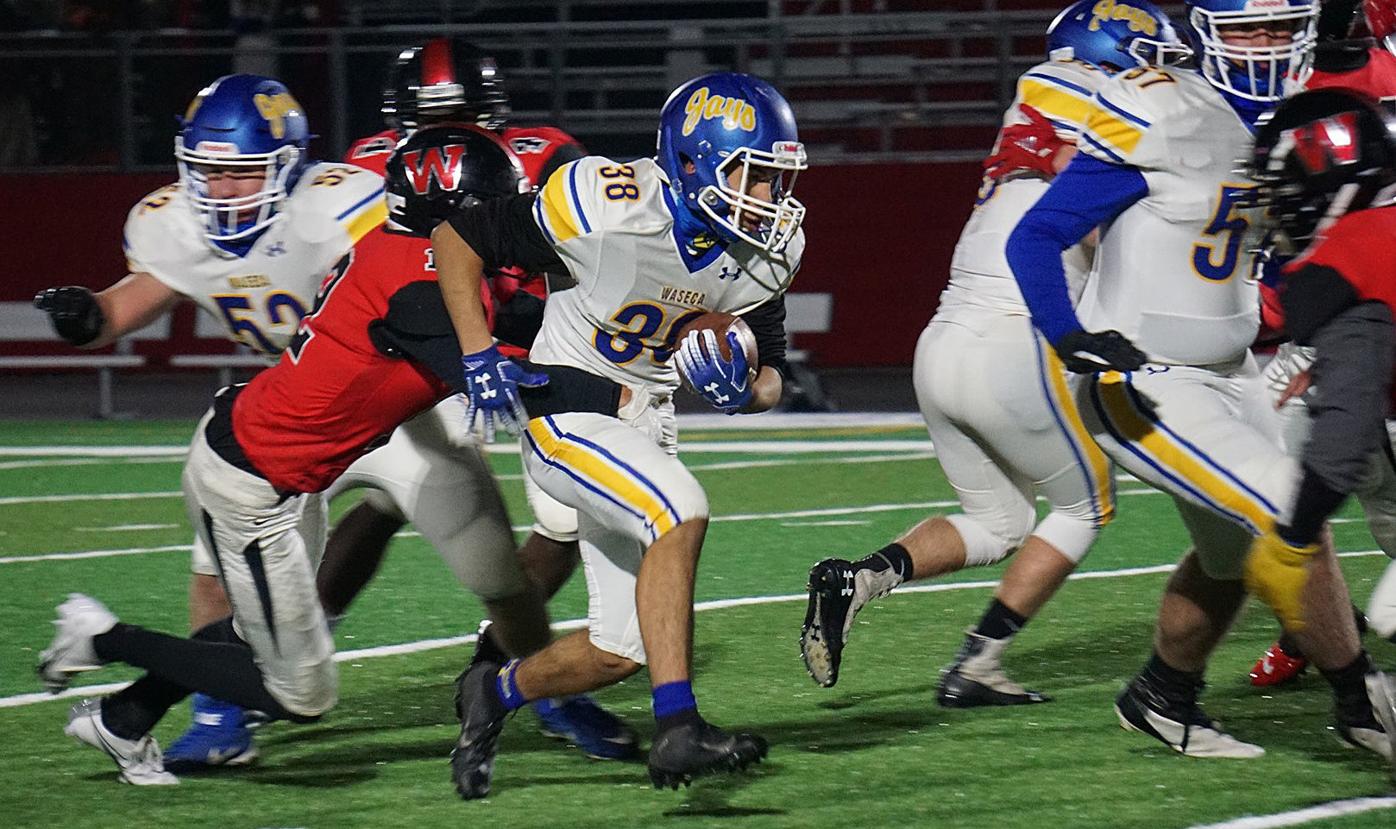 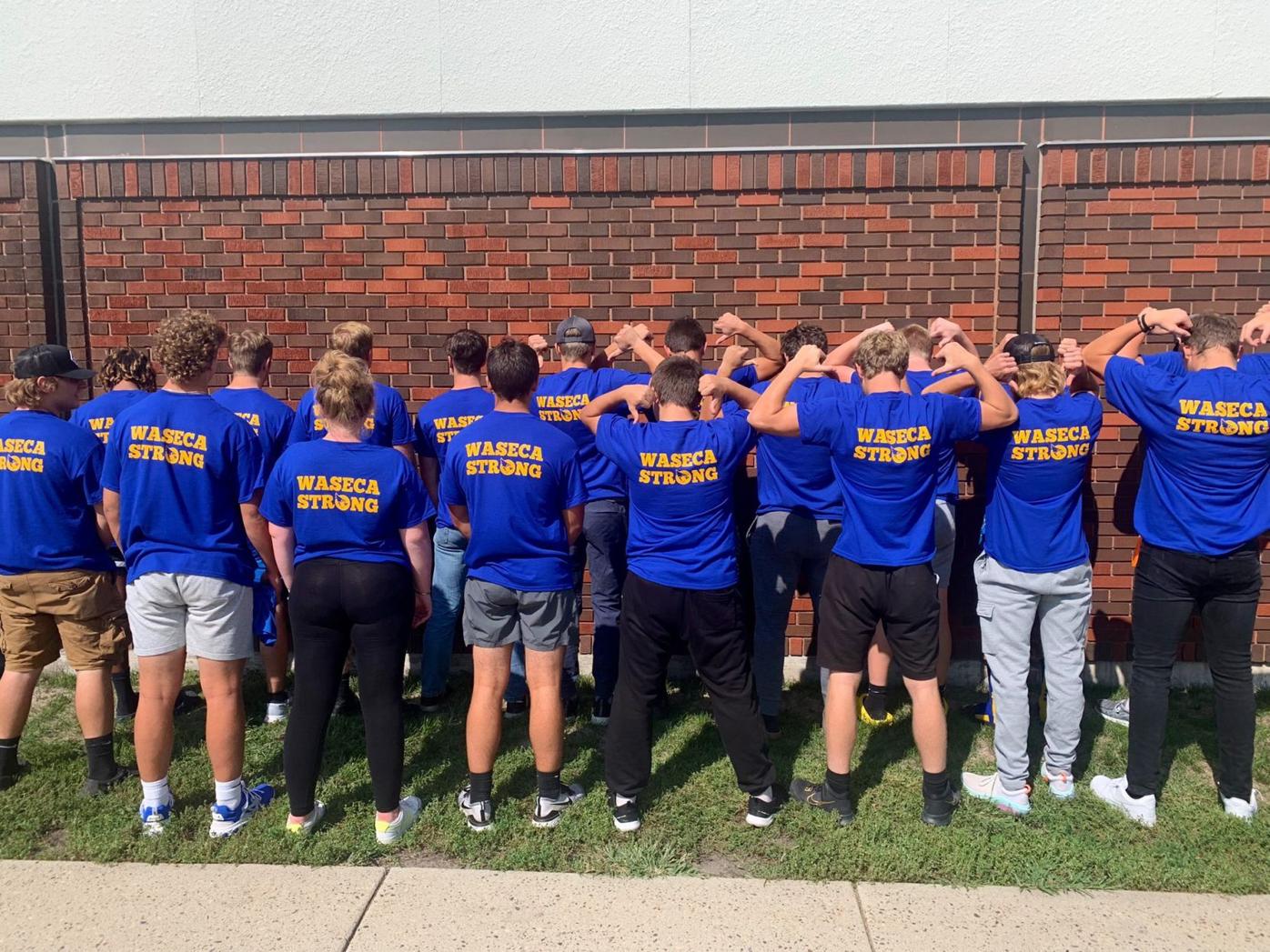 The Waseca Bluejays pose with custom shirts labeled “COACH” on the front and “WASECA STRONG” on the back in honor of Waseca head coach Brad Wendland. (Courtesy of WasecaBluejays/Twitter)

In a normal year, the Waseca Bluejays would have spent the week solely focused on defeating their rivals nearly 125 miles away in Marshall, Minnesota.

However, this week was different, as the Bluejays made the trip out to Marshall to take on the Tigers in a Friday night rivalry showdown without their longtime head coach Brad Wendland, who is still recovering at home after collapsing on the field during their season opener.

The Bluejays made that trip out to Marshall wearing a blue shirt with a gold “COACH” on the front and a gold “WASECA STRONG” on the back to honor Wendland.

“It’s not just another game, it’s Marshall week, and we take Marshall week as seriously as possible,” said defensive coordinator Eric Teders in the days leading up to the Marshall game. “With Marshall week and the stress of coach [Wendland] going down and school starting for these young guys, it’s a stressful, stressful time.”

Despite going through loads of adversity leading up to one of their biggest and most emotional games to start the season, the Bluejays responded and took down the Tigers 19-7 on the road.

One of the keys that helped Waseca battle through and claim their second victory of the year was the lockdown ability of its defense through most of the first half and all throughout the second half.

After allowing Marshall to take the first score and lead of the game on a two-yard touchdown run, the Bluejay defense stepped up and locked down for the remainder of the game, including stopping a potential scoring drive that would have put Marshall up by a score right before halftime.

Leaning on the defense to start was something that wasn’t much of a surprise for Teders, who was acting as the head coach in place of Wendland. Normally, Teders is the one calling the defense.

“We knew the offense would probably start slow tonight, just because of everything with [Wendland] not being there and new calls,” Teders said. “We were going to lean on the defense a little bit more in the first half and then a big play to tie it up there to make it 7-7. At halftime, we felt like we gave them their seven points on a turnover and a couple bad plays there. We just told the guys to stay with the plan, keep grinding, keep working them out.”

The Waseca defense came out even stronger in the second half, forcing every Marshall offensive drive to stall out.

The Bluejays found the end zone twice in the second half, thanks to rushing touchdowns from junior running back Christian Rodriguez and senior quarterback Oliver O’Brien, which gave Waseca the lead and essentially iced the game away for the Bluejays on the respective touchdowns.

Marshall’s offense struggled mightily with consistent quarterback and backfield pressure from the Waseca defensive line and linebacking core. This led to several botched snaps, little to no yardage run gains and forced throws that couldn’t find its way to the intended target.

After a good kick return and a horse collar penalty on the kickoff, the Tigers had an opportunity to keep their hopes alive with their drive starting on Waseca’s 38 yard line, but even then, the Marshall offense struggled to get anything going, which resulted in a turnover on downs that led to Waseca’s offense icing the game away.

While going into Marshall and defeating their rivals on their home turf made the win all that more sweeter, the Bluejays are cherishing this big win more for the adversity they went through and in support of Wendland.

“It’s an incredibly emotional time. I mean everything we worked for, everything we went through this week kind of came to a head and got that one for coach,” Teders said. “Everyone is just so proud, so proud of the guys.”

Waseca finished the game with a total of 277 yards of offense, 226 of them coming on the ground and 51 of them passing.

Marshall finished the night with 212 yards, 121 rushing and 91 passing, but notably, in the second half, the Tigers were limited to 58 yards combined on the ground and in the air.

O’Brien finished the night with 151 rushing yards on 27 carries and all 51 of the Bluejays’ passing yards.

On defense, Ahlschlager recorded 12 tackles, 10 of them solo, while also recovering a fumble and recording a sack. Derrick Brakken finished the game with eight tackles, six of which were solo. Mason DeKruif recorded an interception for Waseca as well.

Waseca will return to the gridiron Friday, Sept. 17, as the team hosts the Tri-City United Titans.