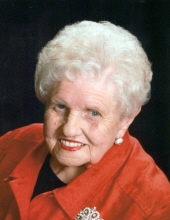 Dorothy A. Dorn 1929–2020 New Hampton —Dorothy Arlene Dorn went peacefully to live with her heavenly father on Friday, Oct. 9, 2020 at the New Hampton Nursing & Rehabilitation Center, she was 91 years young. She was born on June 4, 1929 to Elmer and Martha (Bidne) Evenson on their family farm outside of Joice, Iowa. She grew up the oldest of three sisters and enjoyed helping her Dad on the farm. She was both baptized and confirmed at Bethany Lutheran Church in Joice. Dorothy was a 1947 graduate of Joice High School. After graduation from high school she moved to Albert Lea, where she waitressed and worked for Wilson meat packing. In 1953 she met and married Clifford Dorn from Otisco. After eloping, they took over Clifford's family farm where they raised their three children and built a very successful registered dairy herd. Dorothy was known for placing a flower pot in every window of their state-of-the-art dairy barn. She loved to give tours of their barn to people from all over the world, including a 75-person choir from Madagascar who couldn't speak English but she managed to keep them entertained with many of them hugging her upon leaving. Another joy she had in life was loving all her "U of M Waseca kids" who worked for and lived with her family over the years. Dorothy was a second Mom to many! After retiring in 1997, they moved to Waseca. She and Clifford were members of St. Peter's Lutheran Church of Otisco, where she was active in WELCA. Dorothy had a sparkle to her life not only in her bubbly personality but also in the clothes and jewelry she wore. When Clifford went to buy her a gift he would say "give me the loudest, gaudiest, fishing lure type earrings you've got." She wore sparkly brooches on all her clothes. She enjoyed raising calves, sitting on her deck on the farm which she daily remarked was "the most beautiful place in the world." Dorothy had a smile, a laugh and zest for life making friends wherever she went. She jumped out of a birthday cake in her sixties and had glamour shots taken in her seventies. She loved playing bingo at the nursing home. Left to cherish her memory are her children Michael (Barbara) Dorn of Maple Grove, MN, Marlene (Scott) Klemp of Waucoma, IA, Mark (Linda) Dorn of Webster MN; three grandchildren, who were the light of her life, Mariah Klemp of Des Moines, IA, Caitlin Dorn of Maple Grove, Michael Dorn Jr. of Maple Grove; many beloved nieces and nephews. Dorothy was preceded in death by her parents; two sisters and brothers-in-law Ardella & Leo Foco, Darlene & Russell Spear, Harold Dorn, Doug Dorn, and Jane (Dorn) & Paul D'Alessandro. Dorothy died as a result of coronavirus, her last wish was that nobody risk becoming infected at her service therefore a celebration of life will be held at a later time.

To plant a tree in memory of Dorothy A. Dorn as a living tribute, please visit Tribute Store.
Load comments