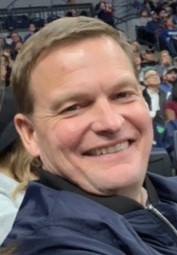 John Priebe 1970–2020 Waseca—John Patrick Priebe, age 49, of Waseca, died on Friday, January 3, 2020 at his residence in Waseca County. John was born on December 26, 1970, in Brooklyn Center to John and Marcia (Paulson) Priebe. He attended high school in Waseca where he graduated with the class of 1989. John furthered his education at the University of Minnesota – Waseca Campus and graduated with a bachelor's degree in Ag Business from the University of Minnesota – St. Paul Campus. He served in the National Guard for two years. Following his education, John worked as a sales representative for John Deere in Watertown, South Dakota for eight years before moving to Waseca to be a part of the family business, "Priebe Financial". He worked alongside his dad for a few years before taking over the business. Since then he has received numerous awards for his accomplishments in the financial industry. John was united in marriage to Jenny Delizo on August 23, 2014, at their home in Waseca County. John enjoyed NASCAR, snowmobiling, 4-wheeling, outdoor activities and tending to his property. He was a big supporter and enjoyed following his son's various activities. The generosity and kindness he showed to all who knew him never went unnoticed. John was active in the Waseca community as a member of the Chamber of Commerce and was a vital part of the Waseca Triathlon. He was a member of Sacred Heart Catholic Church in Waseca. John is survived by his wife, Jenny of Waseca; sons: Ben Priebe and Redzel Priebe both of Waseca; parents: John and Marcia Priebe of Waseca; brothers: Jim Priebe and Justin Priebe both of Waseca; two nieces: Jovae Priebe and her daughter, Kendyl of Waseca, and Jalea Priebe of Waseca; other relatives and many friends. Preceded in death by his sons: Noah and Samuel; grandparents: John and Mabel Priebe and Henry and Marie Paulson. Visitation will be held from 4-7PM on Tuesday, January 7, 2020 at Dennis Funeral & Cremation Services ~ 3rd Street Chapel of Waseca and will continue for one hour prior to the service at the church on Wednesday. Mass of Christian Burial will be held at 1:30PM on Wednesday, January 8, 2020 at Church of the Sacred Heart in Waseca, with Fr. Gregory Leif as celebrant. Memorials are preferred to Sacred Heart Catholic School, Waseca Hockey Association or Waseca Basketball Association. dennisfuneralhomes.com