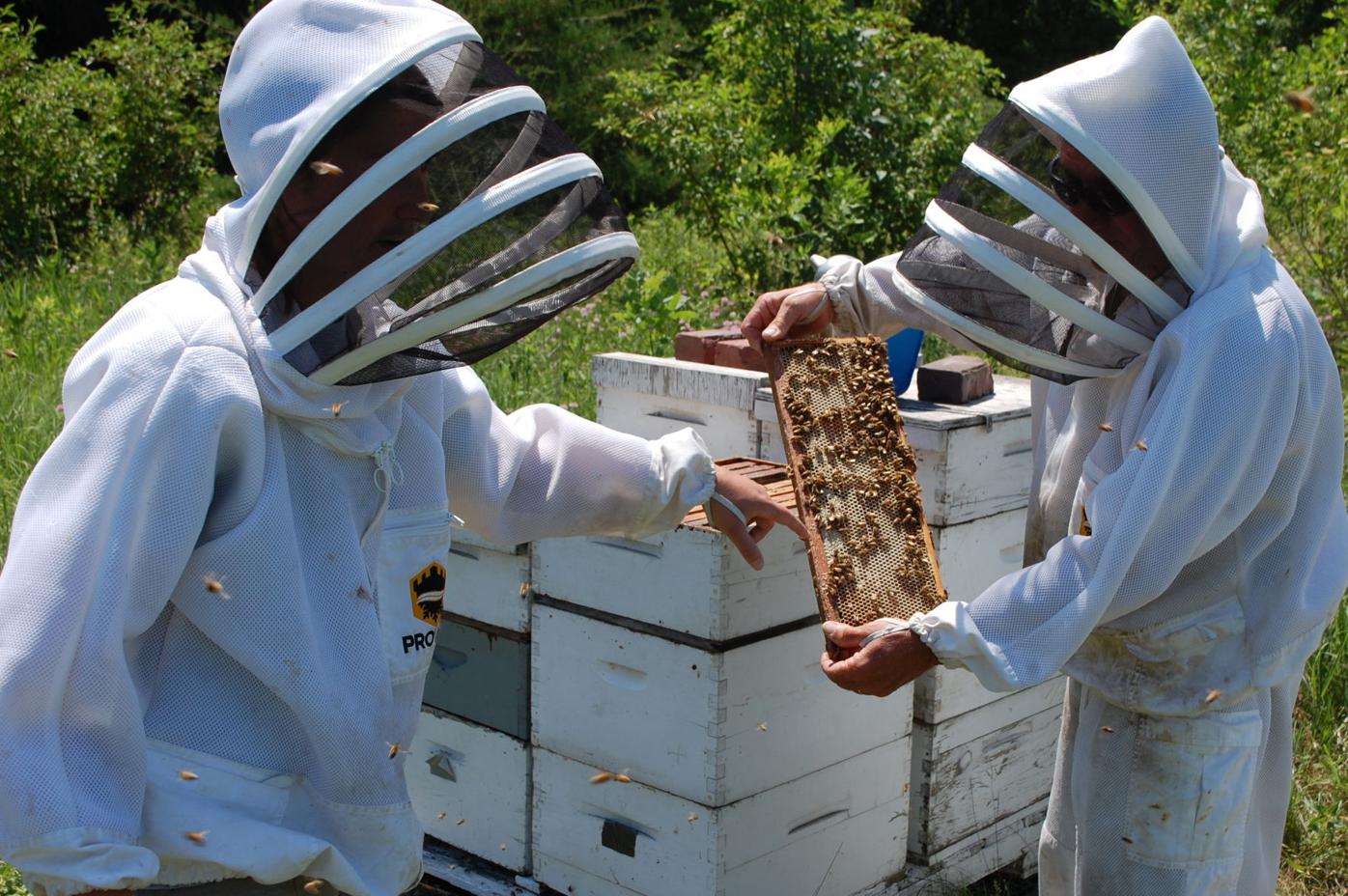 Hannah and Paul Neigebauer holding a frame full of bees in front of one of their apiaries. (Julian Hast/southernminn.com) 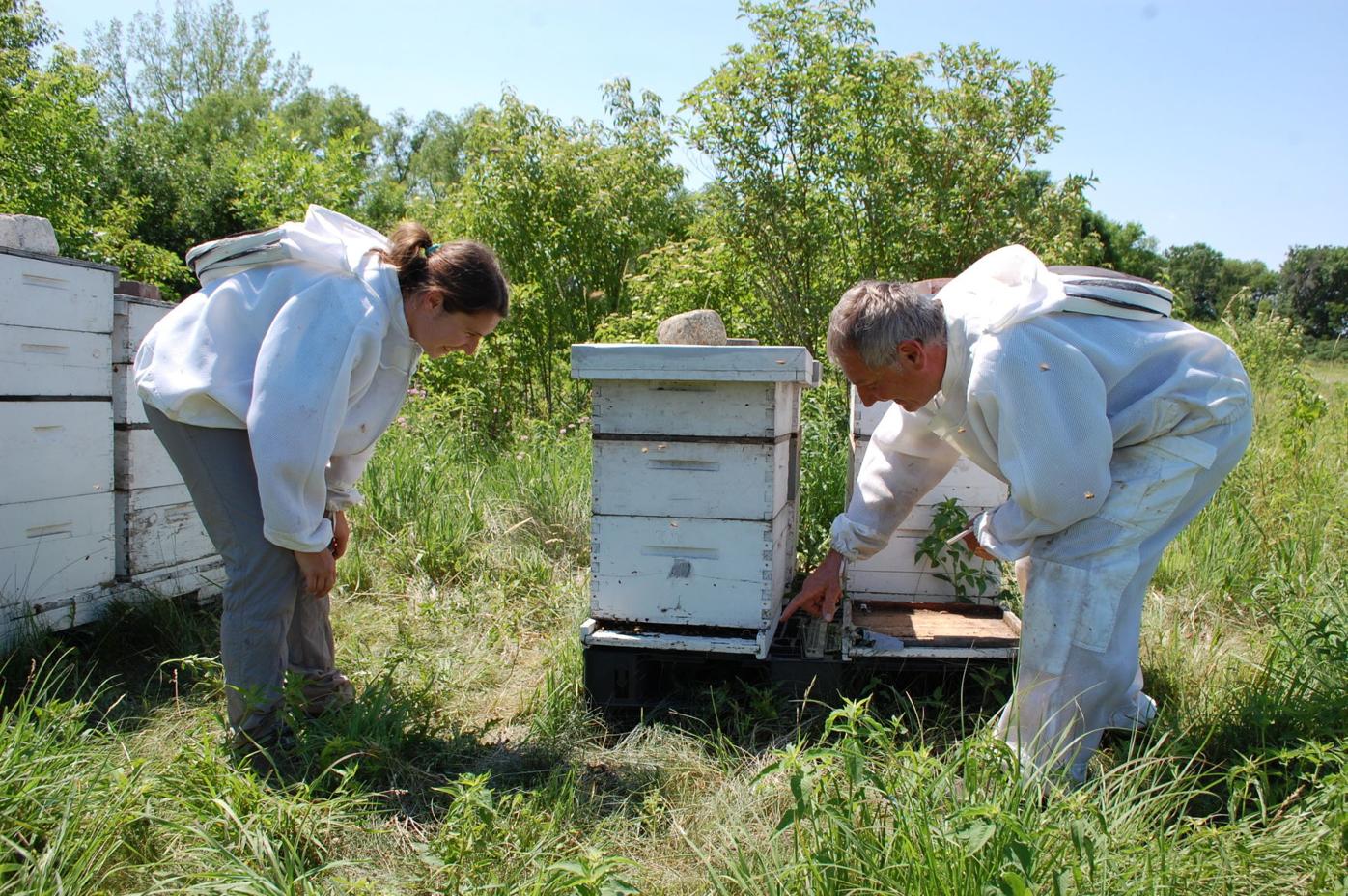 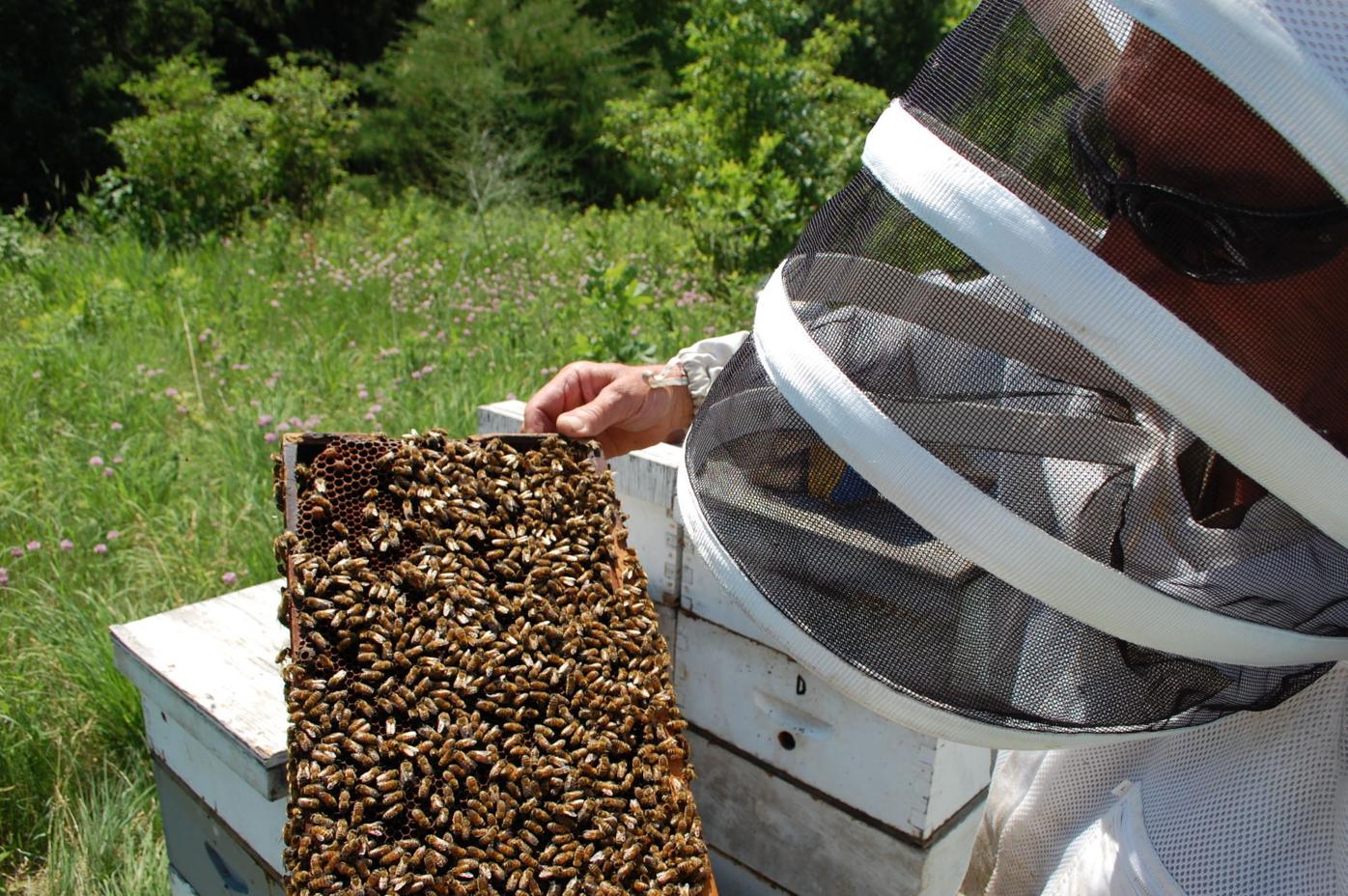 Paul Neigebauer holds up a frame full of bees at the apiary. (Julian Hast/southernminn.com)

Hannah and Paul Neigebauer holding a frame full of bees in front of one of their apiaries. (Julian Hast/southernminn.com)

Paul Neigebauer holds up a frame full of bees at the apiary. (Julian Hast/southernminn.com)

The first time Paul Neigebauer encountered beekeeping, he was 15. He was living with his grandfather, who took him out to the apiary — the bee yard — one day. To this day, he has no idea why his grandfather didn’t give him a bee suit beforehand.

“It was not a good experience,” Neigebauer said, describing the dozen or so stings he got while bees swarmed under his clothes.

Thirty-nine years later, Paul was retiring from his job at the Waseca County Highway Department. Uncertain what to do with his time, and wondering where the fresh honey was in Waseca, he thought he might give the bees another shot.

His daughter, Hannah Neigebauer, who was in college at the time, thought it would be fun to join him in the summer. They had eight beehives the first year.

“I didn’t even really have honey before, until we started this,” Hannah said. “Just a whole new adventure for me. I was in college, I had no idea what I wanted to do with my life, so this was a fun hobby to do on the side.”

Today, Paul and Hannah run Hannah’s Honey LLC in Waseca, selling honey, lip balm and infused products at the farmer’s market and local stores. While their business doesn’t bring in enough revenue to provide a full income — Hannah works at the Revol Greens greenhouse in Owatonna — they say they enjoy getting to work outside, as well as the contact with local business owners and customers at the farmer’s market.

Unlike many other small businesses, Hannah’s Honey wasn’t hurt too badly by the COVID-19 pandemic. While some local stores they supplied had to close, they said, the popularity of the farmer’s market during lockdowns compensated for that loss of business. An added benefit was that they could safely continue their outdoor work, getting to spend time in nature when there was little else they could do.

The first time Hannah tried to work with bees, though, she was uneasy.

“I lifted a frame and the bees went on my hand, and I threw the frame,” Hannah said. “I was freaking out. But now it doesn’t bother me.”

Paul explained that harvesting honey from the bees can be an intense experience.

“When you start taking their honey from them — the first hive you can get away with, but pretty soon they figure it out, and they are coming after you with aggression,” Paul said. “Thousands of them, bouncing off of your (bee suit) veil.”

“And they can sense where your breath is,” Hannah said.

“So they know where your head is. That’s what they’re going for,” Paul added.

Even as more seasoned beekeepers, Paul and Hannah have still had rough moments with the bees. Paul described, for instance, an experience with a new vented bee suit last year, which he didn’t realize at the time fit quite snugly over his ears. What that meant was that bees’ stingers could go through the fabric.

Hannah also learned that if she kneeled, they could go through her suit at the knee. And after harvesting time, they have to walk far off — into cornfields, if they are around — to make sure the bees are gone, and they can take their bee suits off and get into their truck.

While Hannah is still getting settled into Waseca — she bought a house a year and a half ago, and is still paying for college, from which she graduated a few years ago — she said the idea of pollinating with bees someday appeals to her.

While Hannah’s Honey currently operates on the harvesting of honey alone, most beekeepers who wish to make a living off of it earn the bulk of their revenue not from harvesting, but from pollination. They’re called migratory beekeepers, and they move from farm to farm, further south, pollinating apples, berries, nuts and more. Almond orchards can require upwards of a million bee colonies for their pollination. Hannah and Paul have 35 colonies.

“They bring them in by the semi,” Paul said.

In order for them to make this transition, they would need to do a lot of preparation, including learning how to avoid bringing an infection native to the southern part of the country up to Minnesota, a liability for those transporting plants and animals long distances. If Paul’s wife, Jane, who makes the beeswax lip balm for Hannah’s Honey, ever wanted to retire from her job as a court reporter at the Waseca courthouse, she could come with.

For now, though, Hannah is satisfied with their current situation in Waseca.

“It’s nice to have a good, tasty product at the end,” she added.

Paul’s only regret, he said, is getting stung so many times with his grandfather when he was 15. He wonders about the years between then and age 54 when he started beekeeping with Hannah.

“I might have been a commercial beekeeper, who knows?” he said.