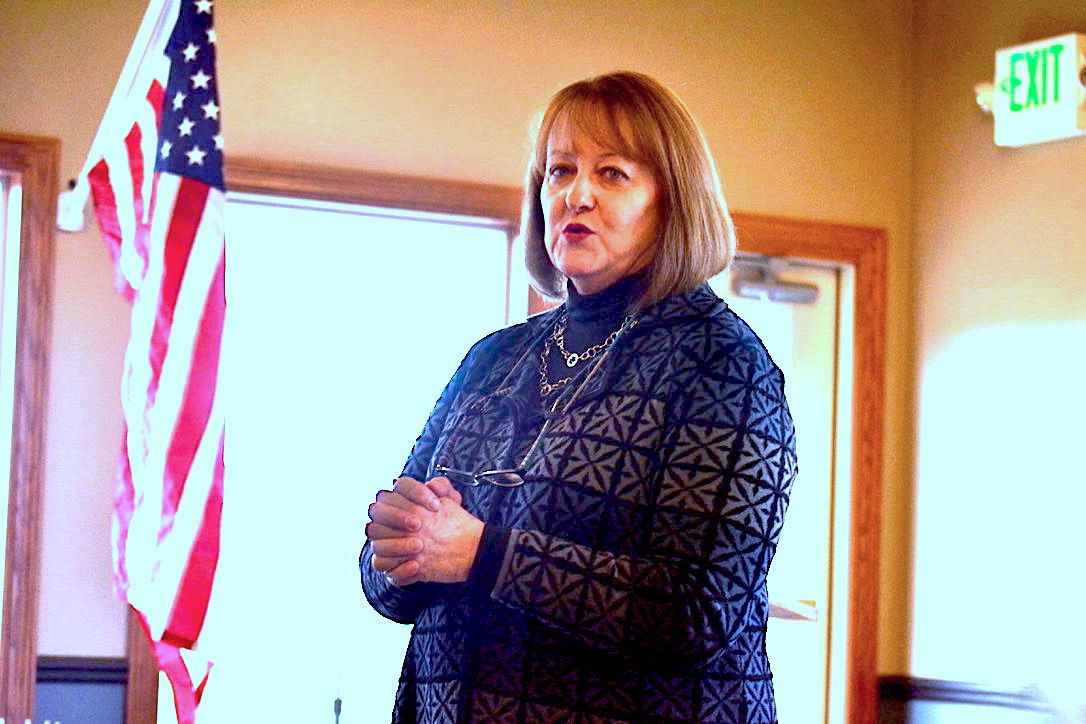 Pam Wheelock speaks to Waseca Rotary on her numerous job sectors sharing what she has learned throughout. (Bailey Grubish/Waseca County News) 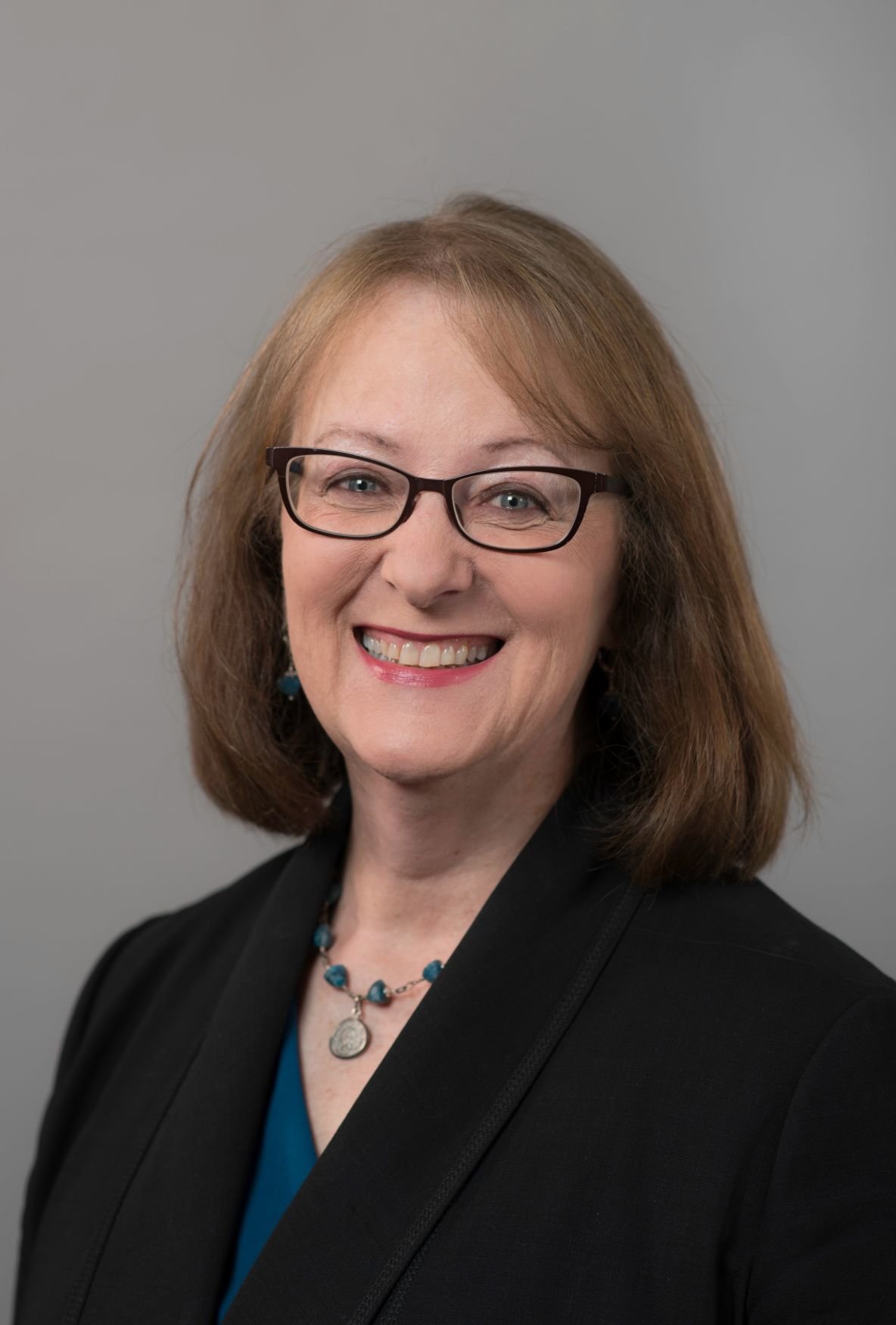 WASECA — Waseca native, top executive and public servant Pam Wheelock returned to her hometown to speak at Rotary, telling of her numerous jobs throughout her career and how her time in Waseca helped her succeed.

“Today I’ll be talking a little bit about what it means in my career, having grown up in a small town on a small dairy farm,” Wheelock said. “I think it has relevance for this group that it doesn’t for many others.”

Growing up in Waseca on a dairy farm taught her a work ethic that she has carried throughout her entire life.

“It is exciting to hear from a Waseca native that has had such an influence on our state during her career,” Rotarian Peggy Hildebrandt said. “Pam has had some interesting and very impactful positions and we appreciated she was willing to come down and address our group.”

Wheelock attended Sacred Heart Catholic School in Waseca before moving to the high school where she graduated. Following her high school graduation she attended Saint Catherine University graduating with a degree in history.

“Both of my parents were instrumental in who I have become, but one of the things that I would say has been really instrumental in my professional career is having a work ethic. And you don’t grow up on a small dairy farm without learning how to work,” Wheelock said. “It’s not about when it’s convenient, it’s not about when you want to leave and quit...you do the work, you get it done and you do it together.”

Throughout her professional career, she’s worked with a variety of people, she said, some of whom were motivated similarly to her and some who did not align with her work ethic.

“The accomplishments of Pam Wheelock are vast and extraordinary,” Waseca Area Chamber of Commerce Director Ann Fitch said. “She has been a part of so many interesting initiatives in Minnesota. All young women in Waseca should know her name and her story. It is proof that the small population of your town does not limit your potential.”

The first job Wheelock had after college was working for, then mayor of St. Paul George Lattimer. Prior to working for the mayor, she was an intern for another Waseca native Tim Penny, who was a state senator at the time.

After working with the mayor of St. Paul, she went back to the Capital to work with Penny on his State Finance Committee to work on his first congressional campaign and when he won she worked out in Washington, D.C., for his term.

Following the work Wheelock did on Penny’s first congressional term she went back to school at Marquette University where she got her graduate degree in economics.

Graduating with her master’s degree led her to work for the State Department of Finance as budget officer. She moved on to her next position as the budget director for St. Paul before becoming deputy mayor of St. Paul in 1992 until 1999.

Her next and favorite venture was working as the director of planning and economic development for St. Paul under Norm Coleman’s mayoral term.

“I think my favorite job was working as the director of planning and economic development for the city of St. Paul,” Wheelock said. “It was during the mid-‘90s, so it was just after a bit of a recession. So it was a time of great opportunity as well and I was working for somebody who had a very clear vision of what his priorities were, Mayor Coleman at the time. We got things done because we had the right team of people, clarity about what was important and what wasn’t and I had a great team of people that I was working with in the department of planning and economic development. It was working with people who were equally motivated to getting those things done. It was working on things that I knew would be a long-term benefit to a community that I lived in and cared about. So I felt like it was significant and meaningful and it was challenging work where I knew I was adding value but I was working with people I respected and enjoyed.”

Her illustrious career continued through her work as Minnesota State Commissioner of Finance for Gov. Jesse Ventura.

The next career move Wheelock made took her to work for the Minnesota Wild where she was the chief financial officer from 2002 until 2008.

When she was working as the Planning and Economic Development director in Saint Paul she worked with then Mayor Coleman to bring the expansion franchise hockey team to Minnesota along with the new Xcel Energy building.

“It was an interesting time for me, early in my career, being a female, I really believed you had more opportunities for leadership in the public sector than you did in any comparably sized private sector employer,” Wheelock said. “Although you have to be willing for people to assume you’re there to take notes, you’re someone’s secretary or that you’re having an improper relationship with someone or it was a time when being a young female in a position of responsibility was still unusual for many people. You know you go through that and you draw on your resources and you just marshal through that and you never let them see you sweat and you go on to do the next tough thing.”

She took her work ethic to the philanthropy sector next, where she was the vice president for the Bush Foundation from 2009 to 2011. This foundation gives to philanthropies primarily in Minnesota and the Upper Midwest.

The next two jobs she held were the interim chief executive officer for Blue Cross Blue Shield in 2011 to early 2012 and University of Minnesota vice president of university services 2012 to 2016.

Throughout her career she had numerous opportunities to help and work with others. What she thought would be her last job to end her career was working as chief operating officer at the Twin Cities Habitat for Humanity in 2017 until March of 2019.

She recalled after finishing at Habitat for Humanity in March 2019 that would be it for her career.

Her retirement was short lived when she received a phone call in the middle of summer 2019 from Gov. Tim Walz who asked her to serve as acting commissioner of the Department of Human Services after the previous commissioner resigned.

“I’ve had a variety of public sector, private sector philanthropy, nonprofit and across those sectors and across institutions of very different sizes,” Wheelock said.

She shared a few things she learned about herself and the professional world through her various career opportunities.

“First of all, I already talked about work ethic. It helps to be smart, but if you don’t apply yourself, if you don’t put your shoulder into the work, nothing gets done,” Wheelock said. “If people know they can rely on you, if you’re willing to stay until the work gets done, and if you’re not afraid of complexity and controversy, you’ll have opportunities, and that’s exactly what happened to me. I felt like I was in the right place at the right time, and if you have a strong enough reputation about being a solid past from any employer, opportunities will come your way.”

Wheelock also spoke on the importance of relationships in a professional setting.

“The other thing I would say is relationships are absolutely the most important aspect. All of what we do, we do with other people,” Wheelock said. “Every employer, every job, every institution you have complexity. You have different subject matter that you have to become an expert on but you can not get anything done unless you figure out who you can trust. That they can trust you, how you can bring your own ethics and integrity into the workplace and how to build and be part of a culture that can actually accomplish difficult things.”

At the end of her talk Wheelock answered audience questions. One of the questions was about the current polarization in our country over politics.

After answering questions the Rotarians and guests extended their congratulations to Wheelock on her outstanding career through the many sectors of service and her ability to solve problems while bringing people together.

“Pam has had an extremely impactful career,” Waseca Superintendent and Rotarian Tom Lee said. “Her message was both informative and inspiring. She is a proud Wasecan and a great representative of the kind of person (bright, hard working, ethical and sincere) Waseca produces. It was truly an honor to have her at Rotary.”