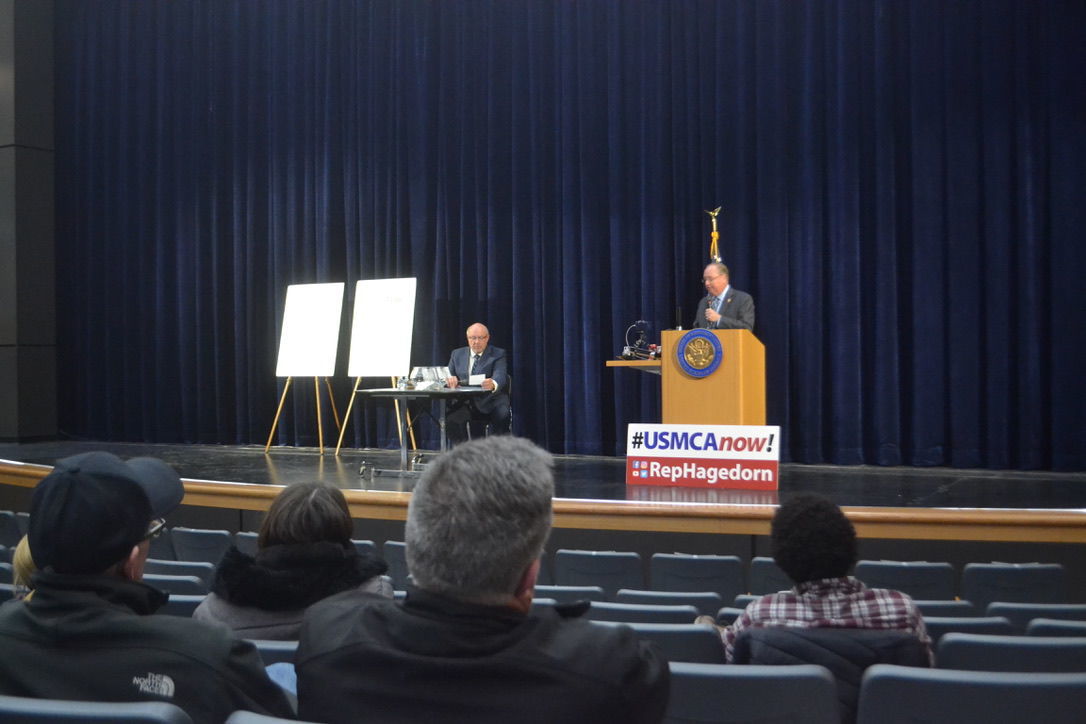 <&firstgraph>WASECA <&firstgraph>— First District Congressman Jim Hagedorn made his 21st town hall meeting with constituents in his district Monday at the Waseca Junior Senior High School Performing Arts Center and people from the area filled the seats eager to listen and ask questions of their representative in Washington.

<&firstgraph>Commissioner Blair Nelson led the town hall meeting pulling questions that audience members posed randomly from bowls, after Hagedorn gave a brief update on what he has been doing.

<&firstgraph>“I promise to always be somebody to fight for your U.S. constitutional rights and the three I felt were most under attack by the left when I ran were right to life, right to keep and bear arms and the right to religious freedom,” Hagedorn said. “I’m a social conservative in those areas and that’s the way I voted on your behalf just as I promised. So whether you like that or don’t like that, that’s exactly what I promised going in and that’s the type of representative I’ll be moving forward.”

<&firstgraph>Earlier in the day before the town hall meeting, the first-term congressman stopped at the dispatch center to speak with the employees. Hagedorn said he was really taken by the work that is done there and the large area that is covered from over in Martin County to Mcleod county over to Steele County.

“While we were in there there were several calls and you can see <&firstgraph>just how important the work of our dispatch officers is to making sure that people can get helped as quickly as possible and save as many lives as possible and that we can help law enforcement do their job,” Hagedorn said.

<&firstgraph>“We appreciate the officer being here tonight and all the law enforcement. I just say that they have very dangerous work and everyday they don’t know exactly what they’re walking into and they’ve had to take on things of social work and deal with all the different types of drugs in our area, all very dangerous so to our law enforcement officers we appreciate you and we all have your backs and you can count on that moving forward.”

<&firstgraph>He went on to speak on what the Waseca area community has dealt with over the past several months with the injury of Sheriff’s Deputy Josh Langer and more recently the injury of Waseca Police Officer Arik Matson. Both are still recovering.

<&firstgraph>Continuing forward in the town hall meeting Hagedorn spoke of what he has been working on recently and will continue to stand for.

<&firstgraph>He spoke on the passage of the United-States-Mexico-Canada Agreement (USMCA) and efforts to ensure renewable fuel standards is implemented as Congress intended. He also spoke on trade, prevention of African Swine fever into the U.S., agriculture business, health care and multiple other topics.

<&firstgraph>Questions were drawn at random and when a person’s question was read they identified themselves and were allowed to ask follow-up questions during their time. Those who spoke to Hagedorn were respectful of time and made their points clear.

<&firstgraph>Hagedorn did his best to answer all of the questions even directing people to speak with his office for a better answer or an answer at all if he was unable to speak on it.

<&firstgraph>“I think all of U.S. Republican, Democrat, doesn’t matter, you want to help people when they have problems with government,” Hagedorn said. “So hopefully people come to us and let us know if there is something we can do. That’s what we’re here for, so we’ll continue to advocate for all the people in the district.”

<&firstgraph>In an interview after the town hall meeting Hagedorn elaborated on a few topics and spoke on some he hadn’t been able to during the meeting due to the lack of time.

<&firstgraph>One of the major things happening in Hagedorn’s district and the Waseca area is the new crop of industrial hemp.

<&firstgraph>He shared there is a bill in the works that would introduce specialty crop insurance for industrial hemp to make sure that if farmers have spoilage they don’t lose out. He went on to say there will have to be tweaks made before it is finalized due to the quickness the plants can spoil in the hot or cold so it will be a matter of looking at standards.

Q and A with Waseca County News

Q:<&firstgraph> What is one of the biggest things you are pushing for in this session?

Hagedorn answer:<&firstgraph> “So in the term so far trade,” Hagedorn said. “The USMCA agreement we thought that was really important and that was the one that we had to get through in order to get the others going. Trade affects all of us, especially our farmers and our agribusinesses. Our focus is on the other part of my agriculture work, ethinal, our renewable fuel standard and how more lately we protect our country from the African Swine fever. We have small business bills that we are working on. We didn’t get to it tonight but workforce issues but in a nutshell those would be the more parochial issues and after that the big ticket items. I went there (Washington D.C.) to partner with the president and like minded people to protect the country, get our military rebuilt, have strong values to export it around the world and to make sure we secure our borders, have an economy that is functioning..., taxes, energy independence, things like that and then protect our basic Constitutional rights and being a part of that coalition is a big part of what I’m doing.”

Q:<&firstgraph> Cash Wise in town closing and thoughts on how to make up for that loss and how to keep businesses around?

Hagedorn answer:<&firstgraph> “Clearly I mean some of these chains have their own issues that don’t involve their local…,” Hagedorn said. “So I think the best thing we can do is to have a vibrant economy. In the rural areas agriculture is very important, our medical care across southern Minnesota is very important and people don’t realize it but there are 100,000 jobs directly and indirectly tied to medical care, so we don’t want to undermine that. Then in the rural areas we especially have to try to keep things on par so we can attract people to our rural areas so we can retain them... I have a bill at the federal level with Pete Stauber and two Democrats — it’s non-partisan — saying if you have a not-for-profit child care, you’re also going to be allowed to get small business guarantee loans. Right now it’s only for profit, non for profit gets wiped out and so if you can have more access that’s good and then we try to drive down some of the costs by lowering these owner regulations at the state level and looking at that at the local legislatures affordable housing, so I think that if you can keep the larger cities and the smaller cities a little bit more on par, that’s helpful. I know every city and county has developers and we try to partner with them as best as we can and look out for the region in general.”

Q: <&firstgraph>Have you seen negativity affect what you’re trying to push when working with trump or have you seen support?

Hagedorn answer:<&firstgraph> “I think those areas prescription drug reform, securing the border, infrastructure bill, transportation those are the types of things we should be working on and we haven’t been working on much because the Democrats have spent a lot of time and energy on the impeachment,” Hagedorn said. “That was more than just holding some hearings. It took most of the energy of the Congress and then it set it up so it’s very divisive. I do think the speaker, Nancy Pelosi, she is one third of the government, the Senate and the president when you look at the law making part of our government. She needs to negotiate and compromise with Mitch McConnell and the president to get things done and we’ll see if that happens. There’s some consideration that she doesn’t want the president having victories going into the election and I hope that’s not the case but we will have to see what they can do. Those are all bills Republicans would support and she controls the floor and she controls the bills, she controls everything, so hopefully we can start working together.”

Q:<&firstgraph> What are your overall thoughts on the Waseca area?

Hagedorn answer:<&firstgraph> “Obviously it’s a farming community and as farming and agribusinesses go so goes things,” Hagedorn said. “A little uptick in prices and a good growing season would go a long ways and the people here are wonderful. I talked about law enforcement and of course the Officer Matson and Deputy Langer and the two law enforcement officers suffering pretty horrific injuries, in a short period of time in a small community. The other parts; New Richland, Waldorf, I enjoy Janesville a lot. There’s the ethanol plant in Janesville, all good, all rural and it’s kind of the epitome of what’s going on in this district. It’s very rural so that’s why we have to try to sustain our farmers and agribusinesses and anything we can do to help our rural communities.”

Hagedorn was elected in 2018 to represent Minnesota’s First District in the U.S. House of Representatives.

He grew up on his family’s grain and livestock farm near Truman. Hagedorn’s father, former U.S. Congressman Tom Hagedorn (MN-02), grandfather, and great-grandfather were all southern Minnesota farmers.

He currently resides in the rural farming community of Blue Earth. Recently he announced that he is being treated for stage four kidney cancer that was diagnosed on February 15, 2019. He has received care and immunotherapy at Rochester’s Mayo Clinic this past year.

Hagedorn brings policy experience to Capitol Hill from time spent as a congressional aide to former U.S. Congressman Arlan Stangeland (MN-07) and a congressional relations officer for two non-partisan U.S. Department of the Treasury agencies. Hagedorn serves on the House Committees on Agriculture and Small Business to promote farming, Main Street enterprises and southern Minnesota’s way of life according to a press release.