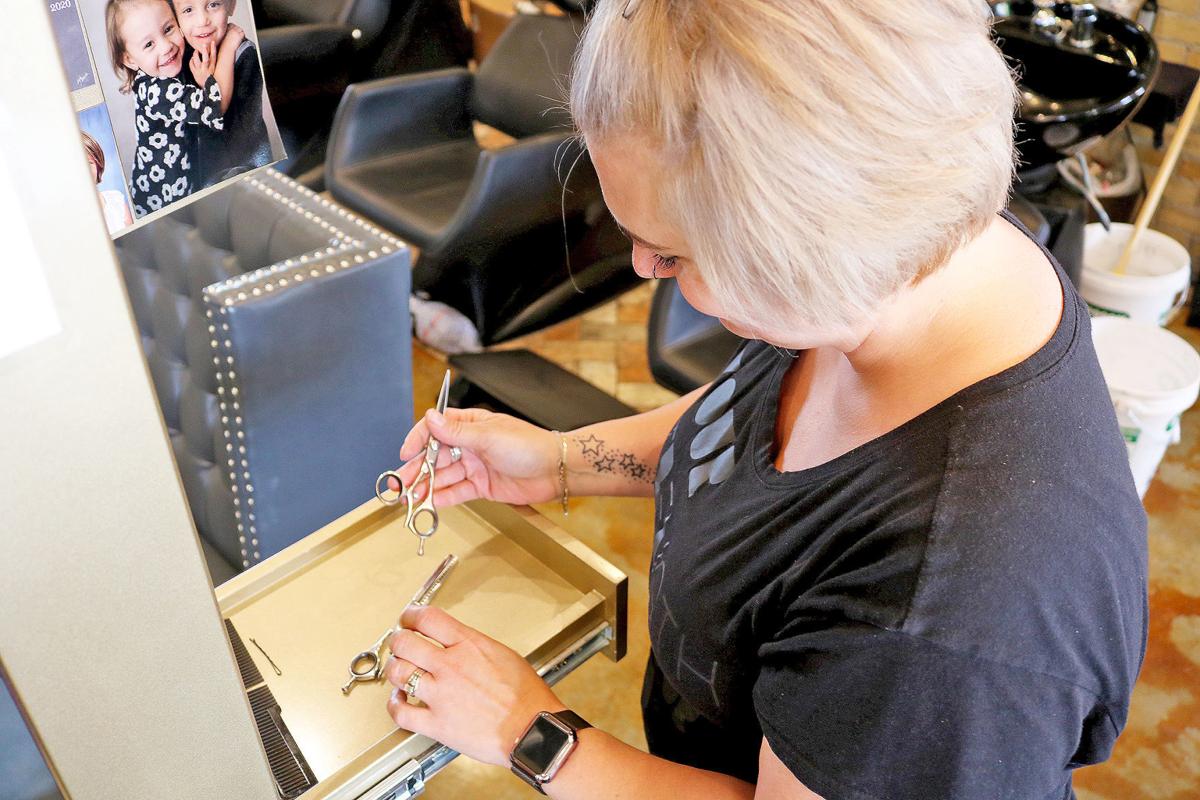 Cassie Meister puts some finishing touches to organizing her station as the remodeling of her beauty salon, Cassie’s Classic Cuts in Waseca, wraps up in time for reopening on Monday. It has been more than two months since hair salons and barbershops have had to shut down due to the COVID-19 pandemic. (Annie Granlund/People’s Press) 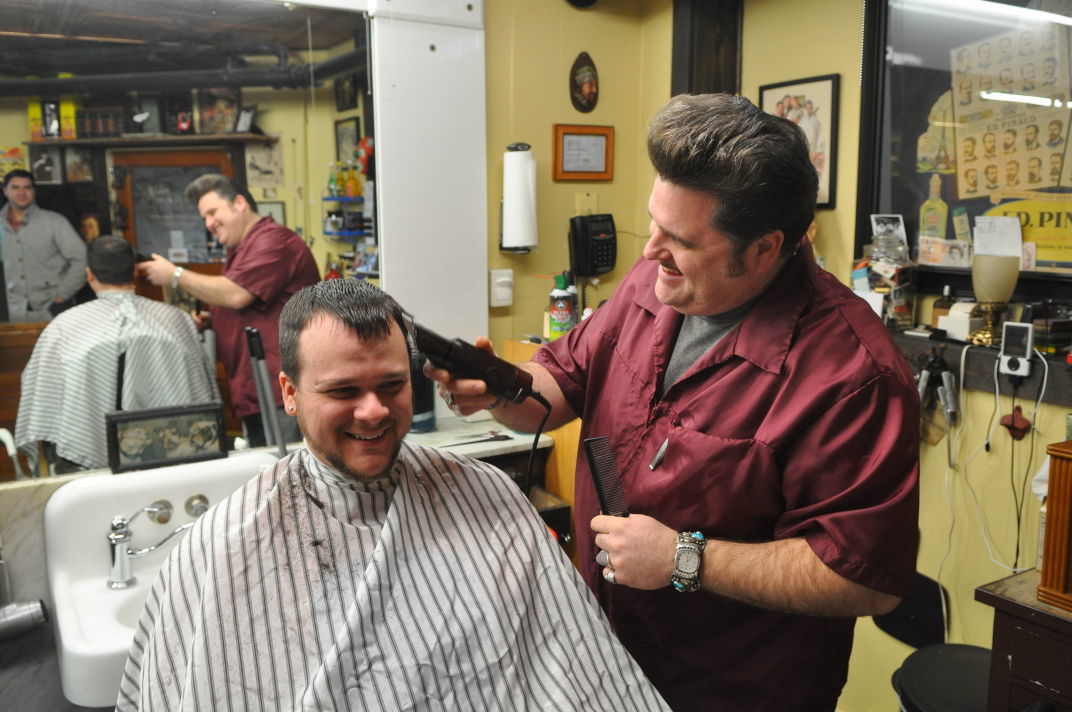 Nate Paschke of Nate’s Barber Shop in St. Peter touches up a customer’s haircut in this 2015 file photo. While haircuts may never look the same again due to COVID-19, Paschke promises that his shop will always be a place where people can laugh and “let their hair down.” (File photo) 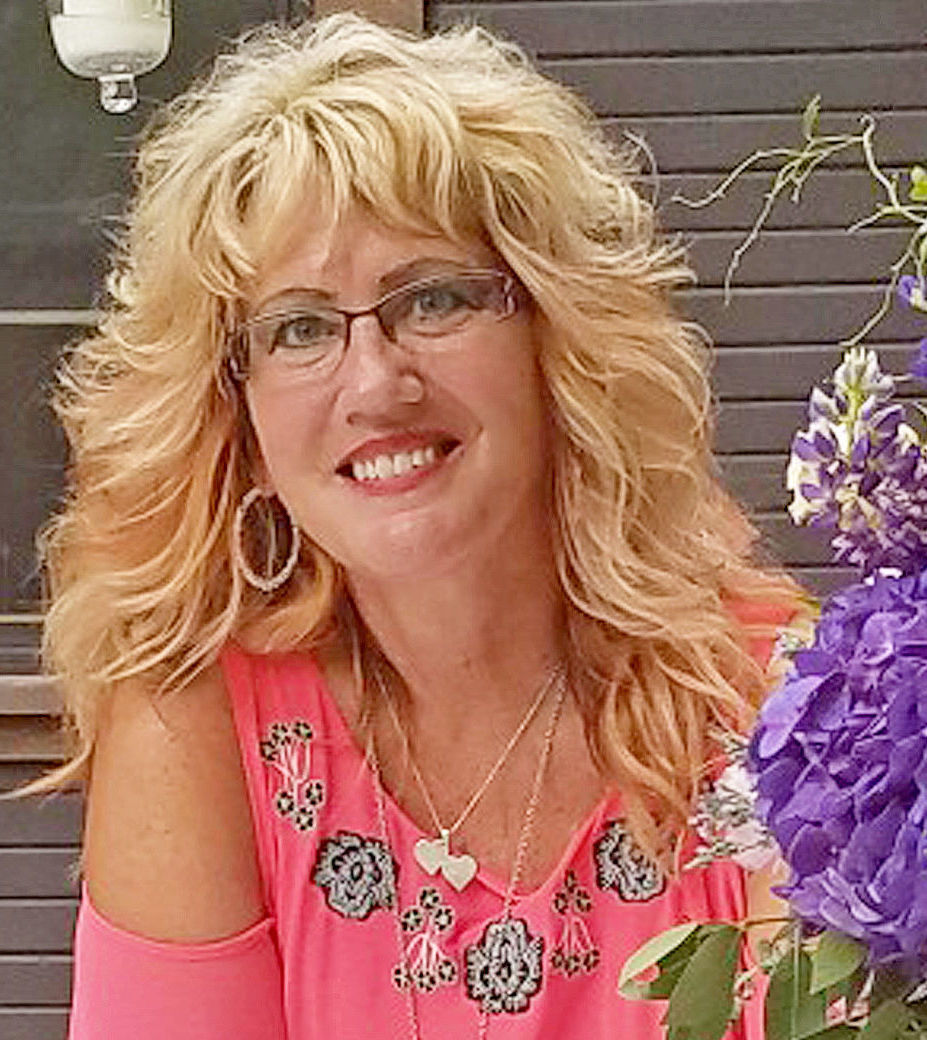 Cassie Meister puts some finishing touches to organizing her station as the remodeling of her beauty salon, Cassie’s Classic Cuts in Waseca, wraps up in time for reopening on Monday. It has been more than two months since hair salons and barbershops have had to shut down due to the COVID-19 pandemic. (Annie Granlund/People’s Press)

Nate Paschke of Nate’s Barber Shop in St. Peter touches up a customer’s haircut in this 2015 file photo. While haircuts may never look the same again due to COVID-19, Paschke promises that his shop will always be a place where people can laugh and “let their hair down.” (File photo)

When the scissors stopped snipping and the barber pole was switched off, no one knew how long it would be until professional haircuts would once again become available — but the time has finally come.

It has been more than two months since beauty salons and barbershops were forced to close by the state of Minnesota during the COVID-19 pandemic, but come Monday stylists will be able to return to the profession they love.

“I was in a bad place for probably a good month,” said Cassie Meister, owner of Cassie’s Classic Cuts in Waseca. “I didn’t think this would go on as long as it has and it was just pretty depressing in the beginning, but I eventually realized that I need to make the best of it.”

While Meister was able to distract herself with new hobbies and additional time with her family, she admits that she was itching to get customers back into her chair. In order to assure that she would be able to open her salon as soon as the state allowed, Meister began ordering personal protective equipment, creating new signs that list the new rules, and doing a remodel to her shop.

“Honestly I feel like we already had a lot of things in place that we needed — all the sanitizing steps have been implemented forever,” Meister said about feeling confident that the beauty industry will be able to smoothly transition into its new normal. “We’re just doing a little bit more, like making sure that we sanitize the desk each time when we check out our clients. I’m not that worried.”

Out near Ellendale, Rhonda Hareid feels equally confident in welcoming customers back into her at-home salon, Looks Unlimted. After she shook off the initial disbelief of being shut down, Hareid refocused and immediately went into preparation mode.

“I just wanted to be ready on the other side of this and know that I would be ready if they were going to let us open,” Hareid said about her months of cleaning, organizing and ordering additional materials for her salon. “I’ll be wearing a mask and a cover up, gloves that I change after each client, new capes — everything. I’ve already had to reschedule four times and I made sure to clarify each time with my customers the plan so we all know what’s going on when the time comes.”

For Hareid, she will have her customers wait in their own vehicles until she lets them know that it is time for their appointment and that the can come inside. She said this will allow her to do a proper and thorough sanitizing of the entire area between each customer. As outlined in the state’s guidelines, both Hareid and Meister will require customers to wear masks at all times during their visits.

“I don’t want to wear a mask, I’m kind of scared out of my mind for that, but the people who aren’t following those rules I think are just very disrespectful to our industry,” Meister said, noting that she has had frustrations with hairdressers who have been providing haircuts during the stay-at-home and stay-safe orders. “I’ve heard about the complications that can come from wearing a mask all day, though, and so I’m not looking forward to that probably more than anything.”

Masks also pose an interesting obstacle for those in the hair business, as explained by Nate Paschke, owner of Nate’s Barber Shop in St. Peter. While the issue of shaves or work on beards and mustaches are a moot point at this time, being that those services are not currently allowed, Paschke said that even haircuts could prove difficult with a mask on.

“We’re all required to wear masks the entire time we’re here, so the question I get asked often is how do we do that?” Paschke said, noting that when they’re doing close cuts for men a mask can most certainly get in the way. “We are recommending people wear the masks that go around the ears, and if we’re still having trouble with that they should be able to hold the mask up with their hand. We think we can do that fairly intelligently.”

Though Paschke won’t open his shop up until June 8 — largely due to the fact that he is still waiting for a new air purification system to come in the mail — he has put plenty of elbow grease into preparing his 134-year-old barbershop for the “new normal” that is being thrust upon him. While some of it is interior changes, such as hanging up clear shower curtains between each chair, other changes more directly impact his shop’s culture and atmosphere.

“It’s really going to be interest for a while because we’ll be doing half as much business as we switch from a walk-in form to appointments only,” Paschke said. “Each haircut takes a different amount of time, but for now we’re just blocking off an hour for each appoint to allow for the sanitization process.”

Paschke, who openly admits to be a go-with-the-flow type of guy, said that schedules and making appointments have never come naturally. Years ago he said Mondays were dedicated to appointments only, but it just worked better for him to stick with walk-ins. Even though the elimination of walk-in appointments will be a change, though, Paschke asserts that the climate will remain the same.

“We’re still going to have that joking around and being a big open area together,” Paschke said. “I’m hoping to cheer everyone up when they’re in here because this is really a place where people can let their hair down a little bit.”

Both Hareid and Meister have said that the changing to schedules will be a learning curve. Meister expressed frustration that she will only be able to work on one customer at a time, while limiting the conversation being one of the biggest obstacles Hareid believes she will have.

“There’s not going to be able to be as much jibber-jabber like it used to be, I will have to focus more on getting you done and out,” Hareid said, adding that the moment she falls behind on one appointment that her whole day’s schedule will be thrown off. “But that isn’t going to be easy, because your clients become a part of your life, a part of your family. You develop these wonderful friendships that evolve into life-lasting.”

Meister echoed Hareid sentiments, saying that the relationships she has developed through her work are near and dear to her heart.

“My clients are my friends and my coworkers are like my sisters,” Meister said. “I haven’t really talked to many people during this and I haven’t hung out with anyone, so it will be nice to be back and have adult interaction again.”

Regardless of the learning curve, the professionals are simply ready to get back to work in make their clients look and feel good once again.

“Nothing is better than sending you out the door with a big smile on your face,” Hareid said. “That makes my day every time.”