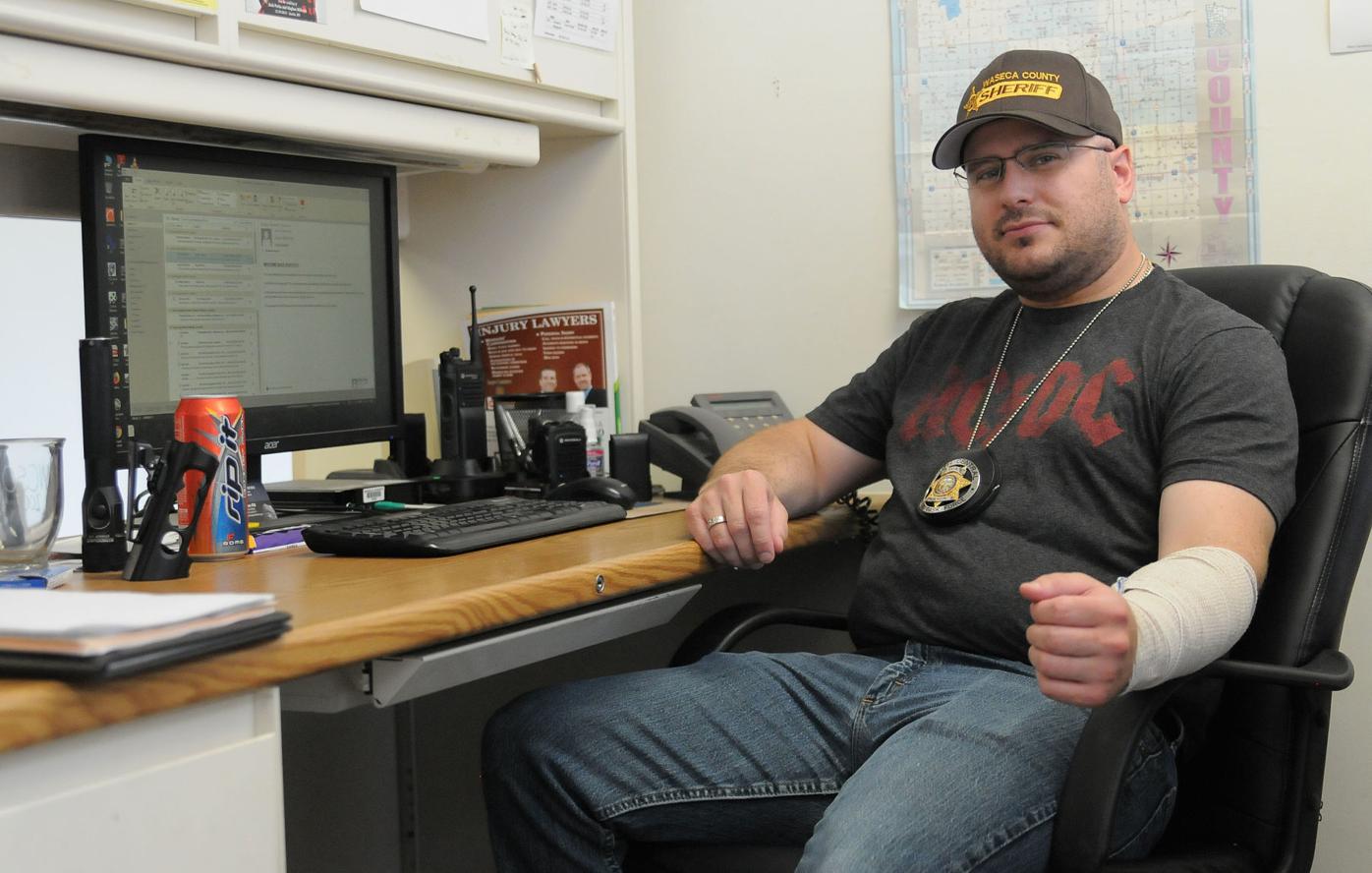 Waseca Sheriff’s Deputy Josh Langr sits at his desk, eight months after he got electrocuted while responding to a fatal car crash. Langr still has a bandage on his arm where doctors removed parts of it to use to replace a hole in his head. (Nick Gerhardt/Waseca County News) 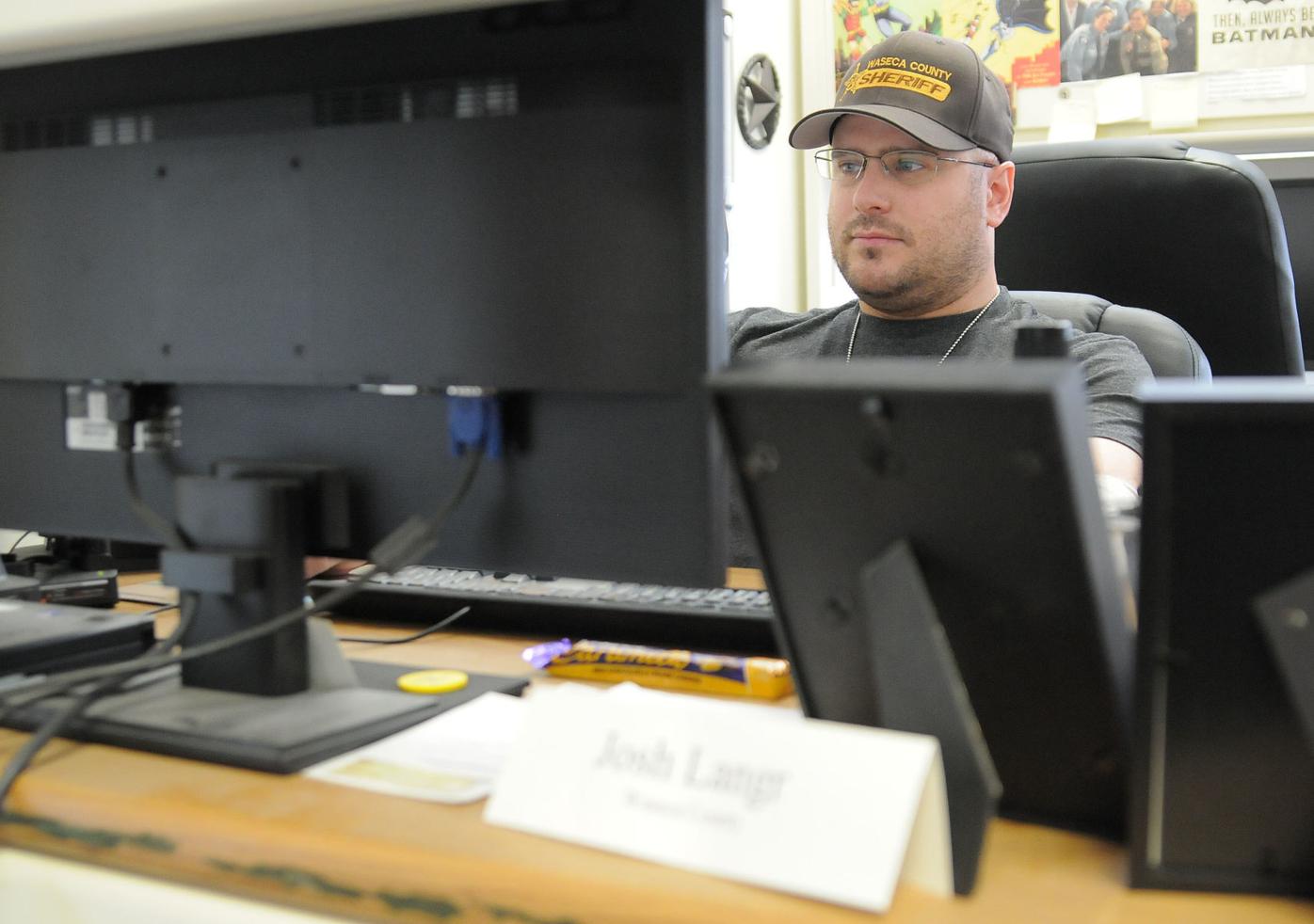 Waseca Sheriff’s Deputy Josh Langr works at his desk after returning to work July 7 following an injury during a fatal car crash. Langr spent eight months away as he recovered from being electrocuted. (Nick Gerhardt/Waseca County News)

Waseca Sheriff’s Deputy Josh Langr sits at his desk, eight months after he got electrocuted while responding to a fatal car crash. Langr still has a bandage on his arm where doctors removed parts of it to use to replace a hole in his head. (Nick Gerhardt/Waseca County News)

Waseca Sheriff’s Deputy Josh Langr works at his desk after returning to work July 7 following an injury during a fatal car crash. Langr spent eight months away as he recovered from being electrocuted. (Nick Gerhardt/Waseca County News)

After more than eight months away, Waseca County Sheriff’s deputy Josh Langr is back at work. In many ways, he’s lucky to be alive.

While responding to a fatal car crash Oct. 23 on County Road 4 Langr was electrocuted by a downed power line. For nearly the next three weeks he stayed at Hennepin County Medical Center as doctors treated his burns and a baseball-sized hole in his head from where the power line struck him. The dangling power line sent 14,000 volts through his body, burning the back of his calf and his feet.

A green Ford Ranger pickup truck had hit a power pole around 9:30 p.m. Oct. 23, ejecting and killing 15-year-old Alexus Tiegs. A 16-year-old male driver was transported to a Mankato hospital with non-life threatening injuries. Langr, who suffered third-degree burns, was airlifted to HCMC to treat his injuries.

Waseca Sheriff’s Deputy Ryan Rands arrived first on the scene, followed by Langr shortly after. Rands helped treat Tiegs at the scene and first heard about Langr’s injury when he heard, “Officer down,” on the radio. At first Rands thought a car had tried to drive through the crash scene and struck Langr.

“He’s very fortunate,” Rands said. “It was very likely and possible we could have had a double fatal at that accident.”

The truck struck the power pole and the pole slanted. Those on the scene knew the wire was down, hanging over the shoulder, but seeing it amid the flashing lights wasn’t easy.

“There were a lot of emergency vehicles,” Rands said. “There were people all over the place. It was a pretty chaotic scene to start with.”

Langr, a Waseca native, has returned to light duty work with the Sheriff’s Department, meaning he remains at his desk, catching up on training and other work after eight months away. It’s been a long journey and Langr has the scars to show.

Following the initial hospitalization, Langr returned home with an open wound on his head. Doctors sent him home with a wound vacuum that he wore until June when he returned to the hospital to seal the wound. The wound vacuum is a negative pressure system that helps a wound heal faster.

“It was very much a ball and chain,” Langr said of the wound vacuum. “When people want to unload a dishwasher or something, they put their purse down. I have to pick mine up to go unload the dishwasher. I have to pick my purse up to get off the couch. I had to put my purse on to go mow the lawn. It was a pain in the butt.”

If it got bumped it could be extremely painful.

Langr has two boys, Everett, 4, and Elliott, 2, with his wife Kelly. One day while doing laundry in the basement, Elliott came down to see what Langr was doing. Elliott tripped, bumped into the door, which slammed into Langr’s head.

“I definitely saw stars after that,” he said.

Langr had a doctor’s visit scheduled for March 24 to prepare for surgery but then the COVID-19 pandemic hit and his procedure was deemed non-essential, which pushed the surgery back to June 1. When he did finally get into surgery, it lasted for seven hours as two doctors worked two procedures to take part of his arm that has veins and arteries and attach that to his head. A second procedure took a skin graft from one of his quadriceps to cover the hole in his arm.

He remained in the hospital until June 5 and will likely have another procedure in the future to help contour his head.

The community rallied behind Langr following his injury and helped raise more than $10,000 through a gofundme page. Kelly had to take time away from work to care for the boys and Langr.

The support made Langr want to get back to the job even more. He received so many get wells card that he ran out of room on his hospital windowsill during his first stint in the hospital.

Langr, who originally attended Minnesota State University, Mankato to study electrical engineering, has worked with the Sheriff’s Department since 2002 when he began in corrections. He continued to attend MSU while working in corrections and decided he didn’t like Calculus II and felt pulled toward law enforcement. He became a deputy in 2012 after working with the Janesville Police Department part-time. His presence in the office is a welcome sight for co-workers.

“He’s in good spirits,” Rands said. “He’s happy to be back working. We are super happy that he’s able to come back.”

“His personality and sense of humor kept things pretty light from the get-go,” Rands said. “He was able to make the best of it. He’s Josh.”