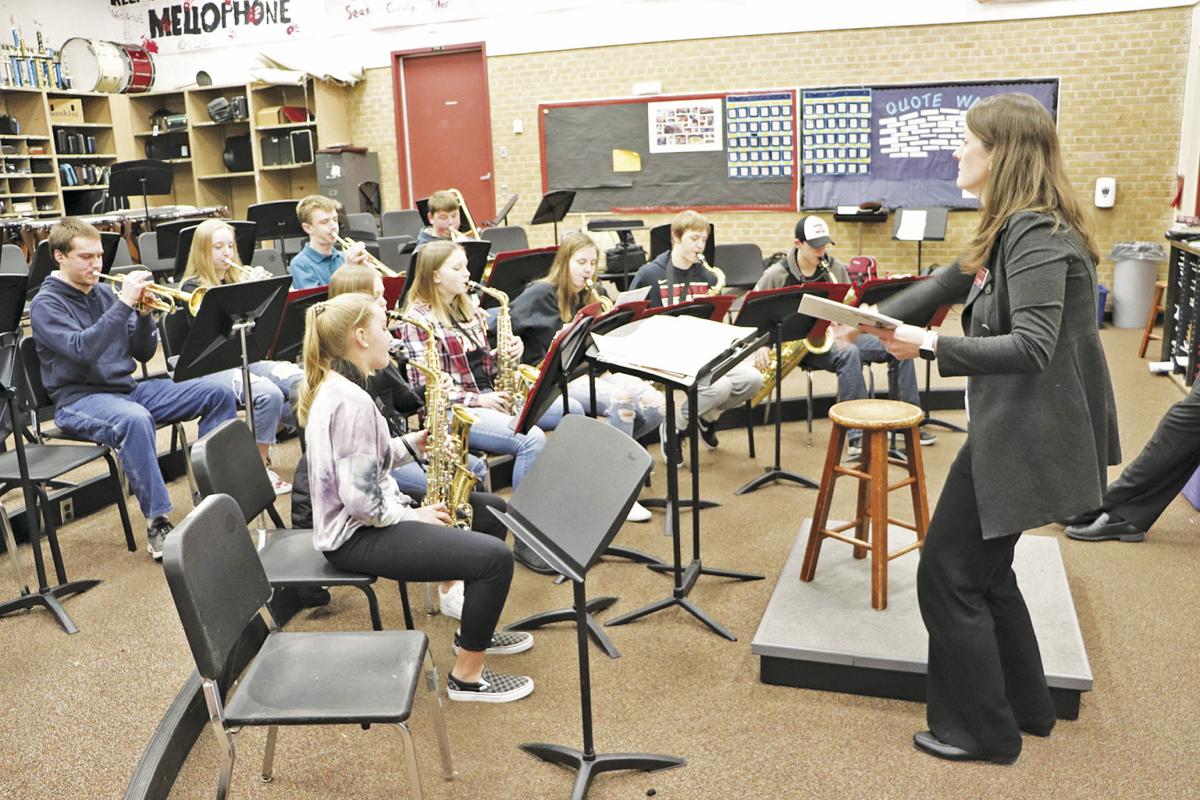 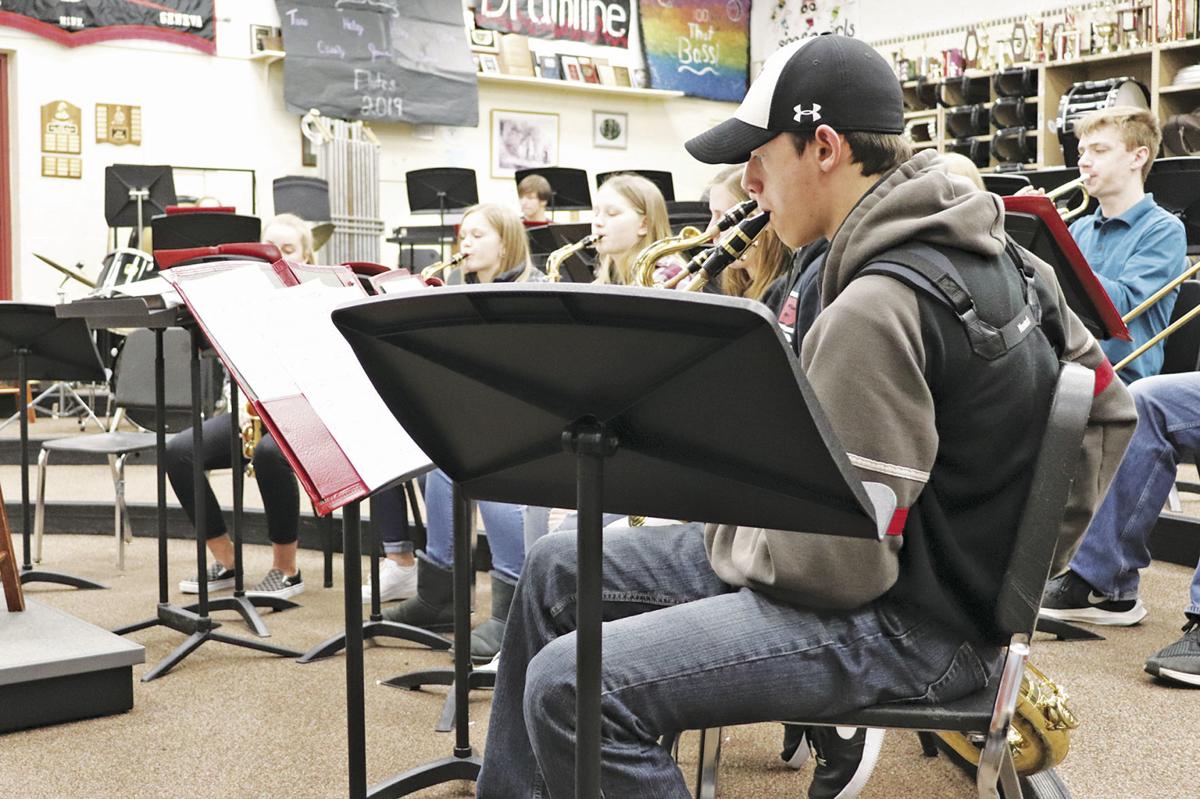 According to students in the NRHEG jazz band, visiting faculty from Concordia College worked with them most closely on listening and synchronizing everyone’s rhythm and volume. Saxophone players also learned a new embouchure that allowed them to toggle back and forth between being in- and out-of-tune. (Bridget Kranz/People’s Press)

According to students in the NRHEG jazz band, visiting faculty from Concordia College worked with them most closely on listening and synchronizing everyone’s rhythm and volume. Saxophone players also learned a new embouchure that allowed them to toggle back and forth between being in- and out-of-tune. (Bridget Kranz/People’s Press)

NEW RICHLAND — In the area for a show, students and staff from the Concordia College music department made time to visit local schools and workshop with their bands before doing a joint performance with Owatonna High School musicians Tuesday night.

On local tours where less driving is involved, Concordia Band Director Peter Haberman said it’s common to spend the entire day in one place, coupling an educational component with an evening performance. “Instead of driving all the way to Florida over nine days and back, we’d prefer to drive less and spend days sitting side-by-side with students and helping teachers drive their students forward.”

To that end, Haberman and student musicians sat in with the Huskies’ ensembles, while music education coordinator Shauna Pickens ventured out to New Richland to meet with the NRHEG Secondary School groups.

“I graduated from Concordia and I was in the band for four years, so when I saw they were on tour in Owatonna, I knew they would have faculty that would go out to other schools,” explained NRHEG Band Director Miles Otstot. “I emailed Haberman and said, ‘Is it OK if we have somebody?’”

Pickens agreed to go out, and in the jazz band Tuesday morning, helped students rehearse pieces for their spring show and workshop areas where they were getting stuck.

“Unless it’s something someone wants me to conduct the moment I walk in, I usually listen to them play and then offer feedback as they go through their normal routine,” explained Pickens, who also worked as a middle school band director for eight years.

“We were really trying to make everyone sound the same, matching everyone,” explained senior Jayna Domeier. She added that the group worked on synchronizing the length of notes and volume as tightly as possible.

“This was the first time I’d done it,” she explained. “You change your embouchure to make the note go out of tune, and then you go back up to where you’re in tune.”

Coming into the classroom, Pickens noted that the group was confident and playing at a high enough level that they could spend the hour working on small adjustments and new techniques. Sometimes, she added, she’d likely be reinforcing things the students had already learned.

“It’s maybe even the same perspective, but from a different voice — which makes a big difference,” she noted. “When I was teaching, the same thing would happen. Someone would come in and say exactly the same thing, but it would fix it.”

While Otstot laughed and said this could be frustrating, he also agreed.

“I’ve had directors who are friends of mine who’ve had them come before and they say the progress students make in that one day is like a couple weeks’ worth of work,” he said. “They just gain so much so quickly when they have it from somebody different.”

Otstot added that the visit was a unique, and free, way to expose his students to something new. Looking back, he explained that he hasn’t had many teens who kept playing in college, but that meeting with someone from a university music department may help change that.

As with Otstot’s connection, Concordia’s initial decision to stop in Owatonna was also made thanks to a preexisting relationship — Haberman and Huskies Band Director Peter Guenther are longtime friends, and have been trying to coordinate a show for a while. When it seemed like schedules would line up for this winter, they got the date on the calendar nearly a year back.

“I’ve also heard the music program there and I know the quality it has,” added Haberman. “We have students from the Owatonna program that have been in the Concordia program in the past.”

Like Otstot, Guenther also said he hoped the visit would help expose teens to how music can fit into their post-graduation plans. Students were able to meet not only with Haberman but also with the college musicians through performing a joint piece at the two ensembles’ Tuesday night show at St. John Lutheran Church.

In addition, a few of the Concordia performers also visited the high school earlier that afternoon.

“A quarter or an eighth of the band goes to each one,” explained senior Jordan Yatckoske, of classroom visits on tour. “Usually, one or two people from the Concordia Band section go with the corresponding school section.”

For fellow Concordia senior Ashley Olson, these clinics offer a chance for her to prepare for a career in music education.

“This is my dream,” she laughed. “It’s been nice to experience other programs and see how they do warm-ups or how they set up their band and different logistical things I have to start thinking about as I hope to get my own ensemble and program one day.”

Haberman added that, as with high school students who may be inspired to continue playing in college, community interactions can also be a way for his students to see how they might continue with their craft after graduating from Concordia.

“It really empowers them to share their music with other communities when they leave,” he explained. “The things they already know and do, they shouldn’t take for granted. They are a special musician and they can share that with others.”