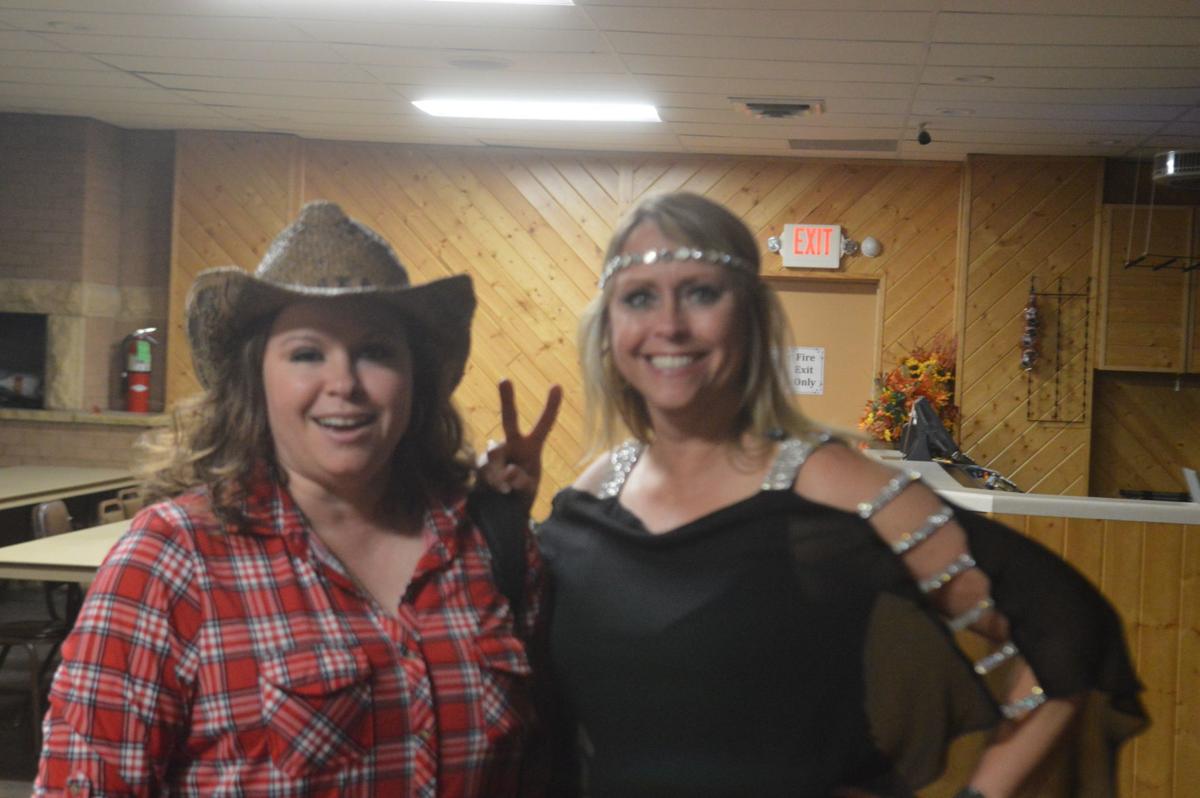 Ghost Hunters and sisters Lynda Kiesler and Brenda Kopischke were dressed up for the Le Center Legion Halloween Steak Fry. Not only did they sing with the band, they also investigated the Legion for ghosts. (Carson Hughes/Le Sueur County News) 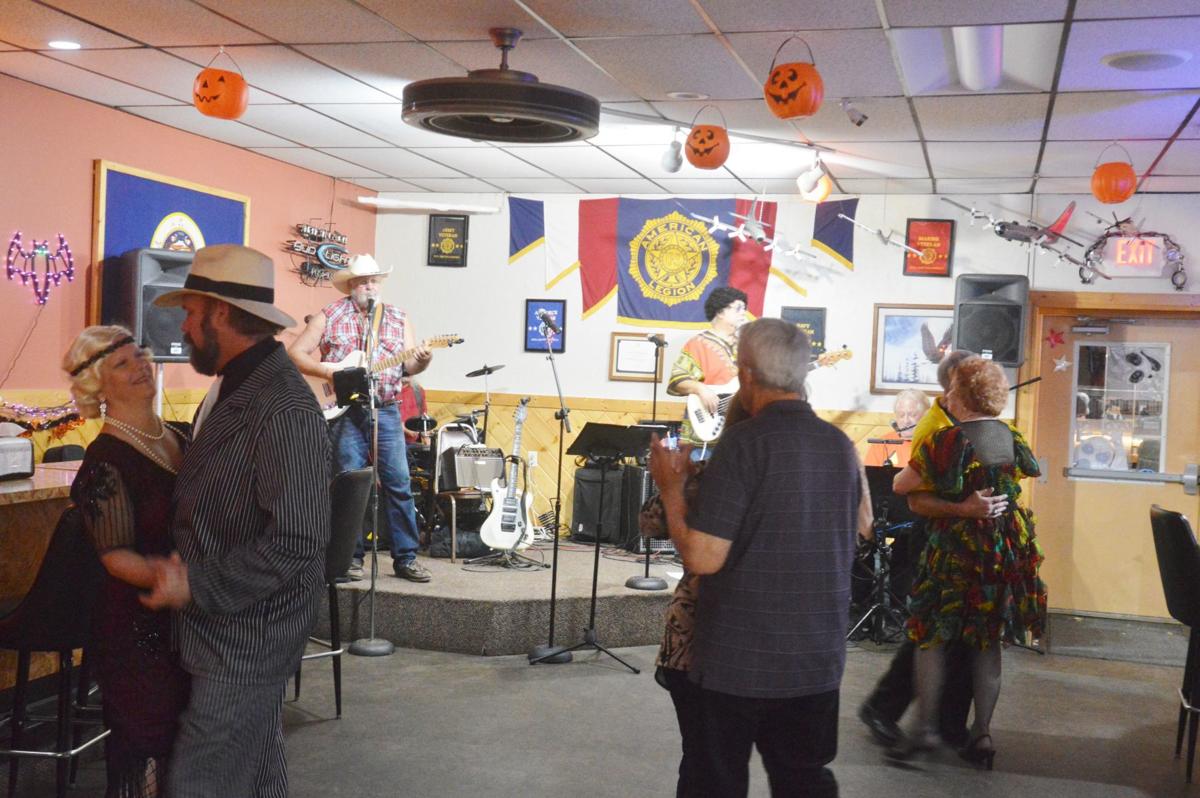 Though the halls of the Le Center Legion may be haunted by the dead, the room was alive Saturday night for the Halloween Steak fry. (Carson Hughes/Le Sueur County News) 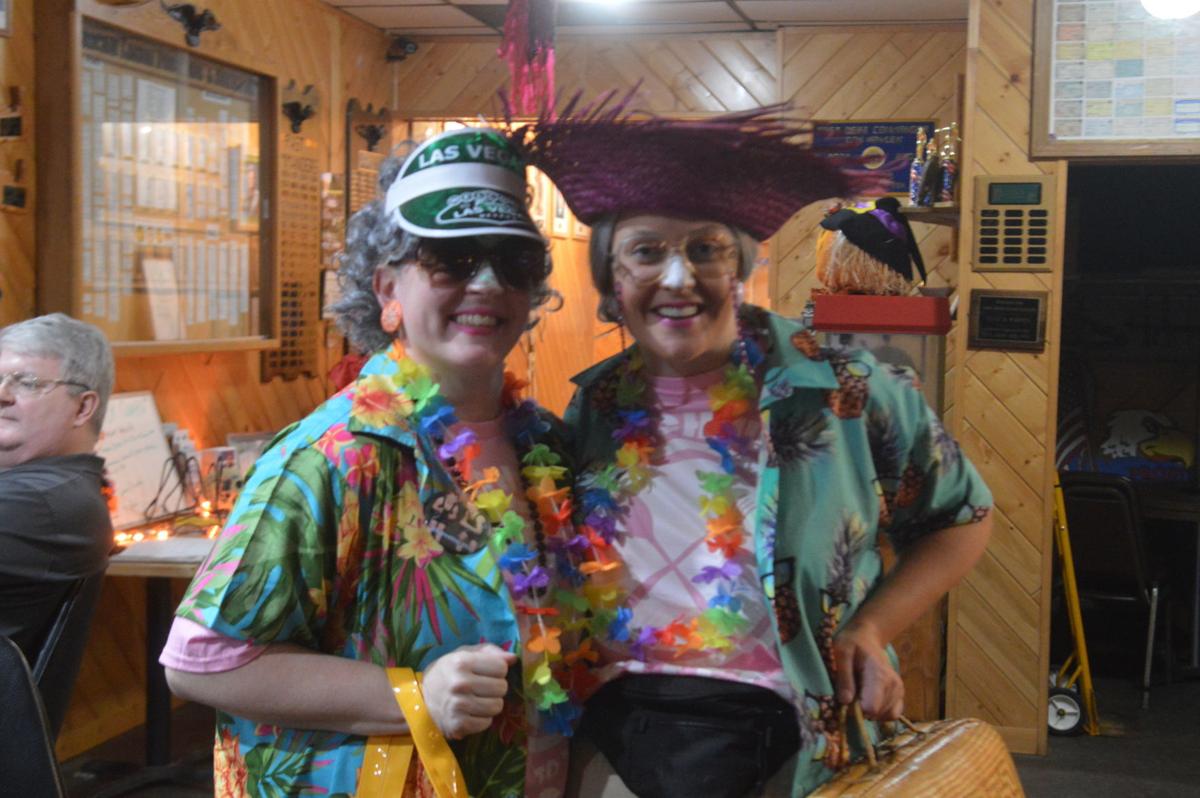 Ghost Hunters and sisters Lynda Kiesler and Brenda Kopischke were dressed up for the Le Center Legion Halloween Steak Fry. Not only did they sing with the band, they also investigated the Legion for ghosts. (Carson Hughes/Le Sueur County News)

Though the halls of the Le Center Legion may be haunted by the dead, the room was alive Saturday night for the Halloween Steak fry. (Carson Hughes/Le Sueur County News)

The Le Center Legion got in the Halloween spirit with more than just a party. Following its Halloween steak fry on Saturday, Oct. 26, Waseca ghost hunters and sisters Lynda Kiesler and Brenda Kopischke were invited to investigate the building for paranormal activity.

The people at the Legion are convinced paranormal forces are at work.

“The Legion is haunted,” said Legion Club Manager Sharon Brunette. “We have at least one entity, maybe two. We had one gentleman who actually passed away at the bar and we had a long time ago we had a lady who passed away in the kitchen. And I have had many experiences as have my bartenders. We’ll see shadows. There’ll be a door slamming when there’s nobody in here with us. I’ve seen at least one person who shouldn’t have been in here and when I chased them out, they were gone. I’ve heard things clanging in the kitchen when I’m the only person in here. I have heard people whisper at me. There’s one bartender here that this entity really likes, and he’ll say ‘Where is she? Why is she not here?’ that kind of stuff. And it happens a lot. Not every day but … I’ll have something happen at least three times a week.”

She continued, “It’s not scary. Sometimes it’s a little scary. When you’re here at night by yourself, it’s a little freaky, but during the daytime, it’s not so scary, because its daytime. It’s funny how darkness makes something scarier … I think he’s playful. There’ve been times where I’ve been in the bathroom doing my ladies’ business and he’ll flick the lights. So I think he’s a little playful and just doesn’t want to leave. He was having a good time here when he was alive. So he was just enjoying it now as a deceased person.”

The frequent hauntings of the Legion piqued the interest of Kiesler and Kopischke, who sang onstage for past Legion events.

“When I was having a party here one time, they were the band, and I actually had an experience that night,” said Brunette. “So I was telling my bartender about it, and they overheard me, and they’re like ‘So this place is haunted?’ And we started talking, and of course I hired them for this, and we’re going to do a little session later on and see if anything happened.”

For years, sisters Brenda Kopischke and Lynda Kiesler have been fascinated with the paranormal. The family had run into several spiritual experiences. Kopischke recalled how when their grandfather died, her mother and aunt reported seeing an apparition in the form of an angel. The sisters heard more stories as they grew up, like the out of body experience reported by their school librarian after a car crash.

These tales combined with ghost hunting shows, like “Ghost Adventures,” inspired a passion for poltergeists. For the past several years, the sisters, along with their cousin Miranda Cole, have toured haunted places across the country, including the Palmer House in Sauk Centre, the Calumet Inn in Pipestone, the Villisca Axe Murder House of Villisca, Iowa and the Mizpah Hotel in Tonopah, Nevada.

“How it started out, we had all shared our stories — Lynda, Miranda and I,” said Kopischke. “When Lynda was turning 40, Miranda and I came up with this idea. Let’s take Lynda on a day trip, a paranormal birthday trip, on which she doesn’t know she’s going … A couple years later was Miranda’s 40th birthday, so [Lynda] and I planned Miranda’s surprise paranormal trip, which was to Villisca, Iowa. And because I’m older … They said ‘Brenda, you get to be 40 again.’ So last year, they surprised me and we went to Nevada.”

Hunting for ghosts has since become a family activity. While searching for spirits, the sisters use a variety of equipment to detect ghosts, including electromagnetic field (EMF) meters, K2 meters, audio recorders, dowsing rods and cameras.

“You can see them in cameras because they exist in different spectrums that most people’s eyes can’t see,” said Kiesler. “So while I’m looking through a video screen, I can actually witness, like at the Palmer House, a ball of light come out of a chair toward me.”

Touring these haunted areas has given Kiesler and Kopischke a chance to see historical buildings in a new light.

“These old hotels, they just hold so much history,” said Kopischke. “And when you walk in, first of all, you’re just struck by its beauty and just how they kept them the way they were back in time, so it’s pretty easy to get hooked on that. And then you take it to the next level when you’re there to get that acknowledgment, that evidence.”

“We’re just starting to get good evidence like you see on TV, like what they call the class A EVPs (electronic voice phenomenon),” added Kiesler. “We achieved that at the Calumet this time. We heard male voices and old woman voices in the room answering our questions.”

“As we’re bantering away, not paying any attention,” Kopischke added. “It’s not until the next day when we listened to the recorder, and by golly, it was right there. And then we share our experience. Usually, the hotel owners are very interested.”

“We have a lot of fun. We just like to learn history and everything,” said Kiesler.

“And we feel with each visit we do, we get a little bit better,” Kopischke added.

Brunette hopes that the paranormal investigators’ inspection of the Legion basement will provide further proof of the reported hauntings.

“I’m hoping they’ll get something to make us all feel better that we’re not crazy,” said Brunette. “I mean it would be cool if they got some readings on their EVP or an image on one of their cameras or something. It’s just validation.”

The results of the sisters’ ghoul gathering research will be revealed in the future.