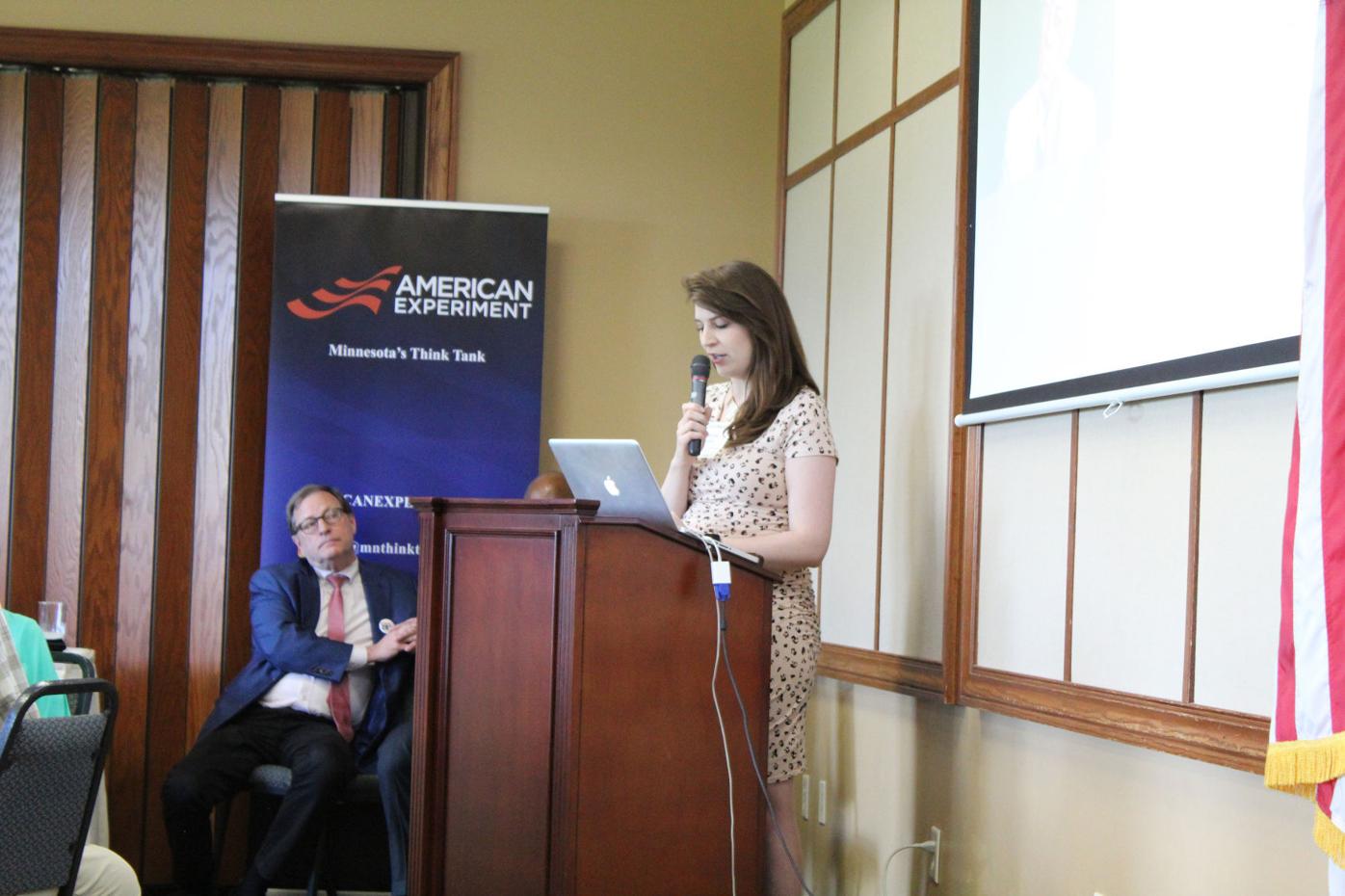 The Center for the American Experiment’s Catrin Wigfall shared her opposition to Critical Race Theory and the state’s first draft of the social studies standards revision. (Ashley Rezachek/southernminn.com) 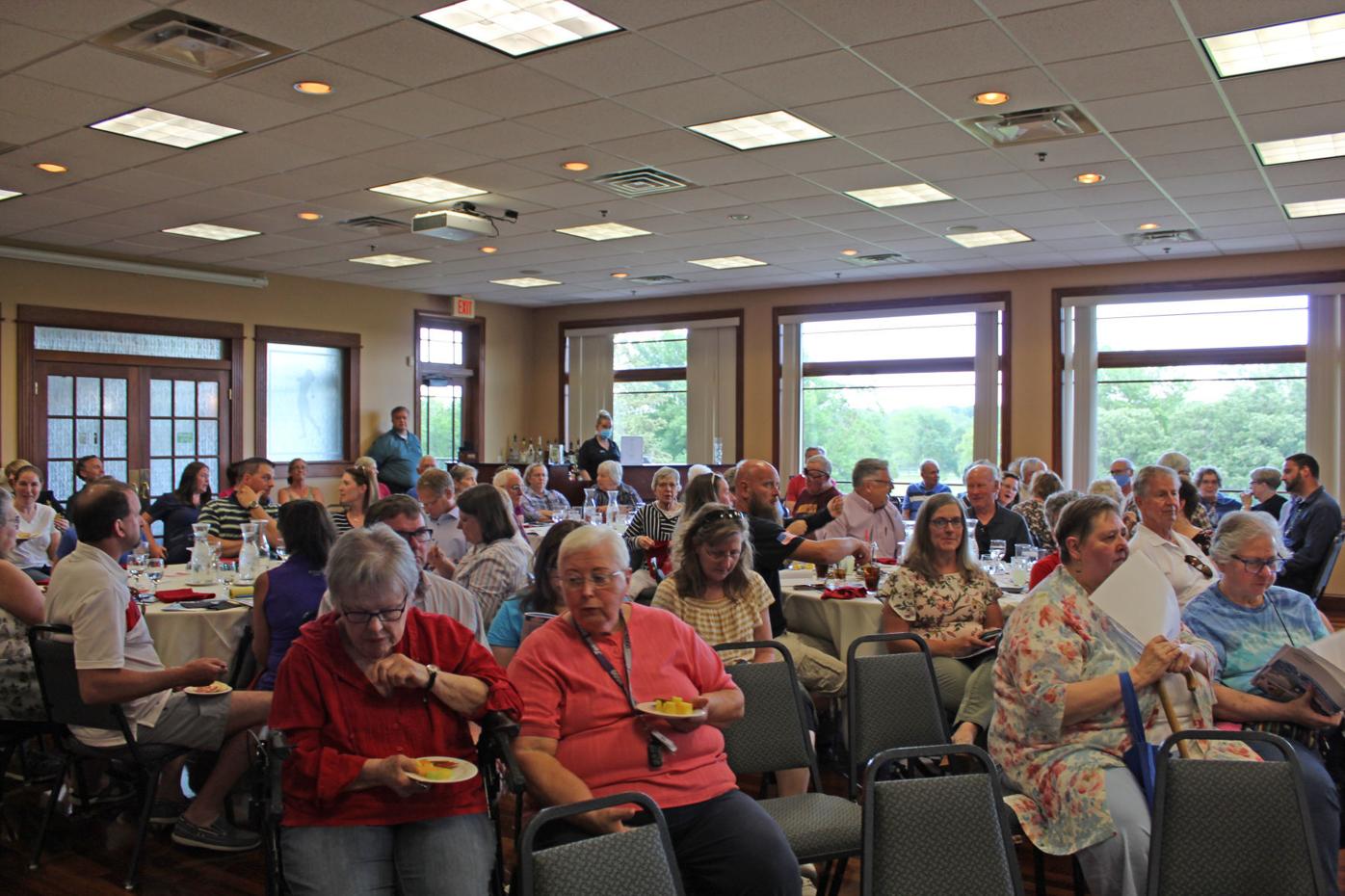 A large crowd gathered at the Owatonna Country Club for the Center of American Experiment’s Raise Our Standards tour on June 8, 2021. (Ashley Rezachek/southernminn.com)

The Center for the American Experiment’s Catrin Wigfall shared her opposition to Critical Race Theory and the state’s first draft of the social studies standards revision. (Ashley Rezachek/southernminn.com)

A large crowd gathered at the Owatonna Country Club for the Center of American Experiment’s Raise Our Standards tour on June 8, 2021. (Ashley Rezachek/southernminn.com)

Area residents concerned about the future of education and what they say is a “woke” political movement infiltrating Minnesota’s public schools packed into the Owatonna Country Club Tuesday.

Catrin Wigfall, an education policy fellow with the Minnesota-based conservative think tank Center of the American Experiment, spoke against the state’s draft revision of social studies curriculum and Critical Race Theory (CRT), arguing that it’s invading public schools, as part of the Center’s Raise Our Standards tour around the state.

“We see through Critical Race Theory. This is truly becoming America’s new institutional orthodoxy, and we need to understand that education requires the free exchange of ideas, and we are seeing that replaced with indoctrination, which in contrast, uses the manipulative tactics, of coercive thought reform to reshape teachers’ and students’ beliefs and attitudes to support a particular agenda, and we’re seeing that particularly in education,” Wigfall said.

Wigfall also argued that the state is rewriting the social studies standards to prioritize political correctness at the expense of historical events and ideas that impacted the state and the nation’s history.

Minnesota is currently in the process of updating its social studies academic standards, which state law requires to occur every 10 years. A committee of 38 members from across the state released the early first draft of Minnesota K-12 Academic Standards for Social Studies on Dec. 1. The committee is comprised of parents, teachers, school administrators, school board members and postsecondary faculty and business community members, according to the Minnesota Department of Education (MDE).

The draft includes the overall standard revisions, but the specific benchmark knowledge and skill sets students should master in each grade haven’t been drafted. However, some Minnesotans are taking issue with the example benchmarks posted on the MDE website.

On Tuesday, Wigfall challenged the revisions, saying they weren’t measurable, and are narrow, limiting and divisive.

She claims that there are efforts to change the narrative and rewrite history at the state level, pointing to the revisions. Adding that “it’s the latest vehicle from Gov. Tim Walz and the Minnesota Department of Education to replace key concepts and ideas with politically correct attitudes and commitments.”

Comments on the draft received by the state during a public comment period that closed in January will be used to create a second draft. MDE has extended its revision process to accommodate for the volume of comments and a second draft of the standards is expected to be announced this summer. More information on the process can be found at education.mn.gov/MDE/dse/stds/soc.

Critical Race Theory in the classroom

Wigfall said CRT is turning the classroom into an “ideological battleground,” threatening the quality of student’s education. She argues that CRT emphasizes simplistic racial groupings instead of “shared humanity” adding that it pits people against each other.

“Well this diverts energy away from the primary function of our schools, which should be to help students further develop into responsible, civic minded, enlightened and informed members of society and adults,” Wigfall said.

According to EducationWeek, critical race theory developed in the late 1970s and early 1980s as part of a framework for legal analysis. Critical race theory’s central idea “is that racism is a social construct, and that it is not merely the product of individual bias or prejudice, but also something embedded in legal systems and policies.” CRT looks at how patterns of discrimination live on today, but in less obvious/blatant ways. The redlining of areas deemed impoverished in the 1930s, which resulted in banks refusing to offer mortgages to the Black residents in those areas, is a frequently used example.

Opponents of CRT argue that it defines a person’s most important characteristic as their skin color, it emphasizes differences rather than similarities, and that it teaches kids what to think rather than how to think. However, supporters of CRT say these are just myths and misunderstandings. Proponents of CRT say that as a result of race being a social construct, laws and other social norms are what perpetuates racial inequalities.

Owatonna High School offers an elective course titled Critical Race Theory, although it is only loosely based on CRT with more emphasis on another program called Courageous Conversations. The class is a discussion-based course co-facilitated by an Owatonna High School teacher and Natalie Rasmussen, a professor at Minnesota State University, Mankato’s College of Education whose research focuses on racial equity.

Students in the Owatonna class examine and analyze ways in which society continues to perpetuate these conditions.

Students of all races in the class discuss racial equity, their lived experiences and historical practices among other things, according to Martina Wagner, the education equity coordinator at the Owatonna school district. The purpose of the class is to facilitate conversations on racism, racial equity and social justice. The course creates a space for students to share their stories and includes large and small group discussions on relevant articles and current events. Students earn both high school and college credit for the course.

Owatonna’s CRT course is not about blame, shame or guilt, Wagner said. She noted that the newest generation of students are eager to have these conversations and are willing to explore other perspectives and ways of thinking. The district is aware there is pushback to CRT and Wagner says the district wants to partner with families and have an open dialogue and understanding.

Owatonna School Board member Deborah Bandel made waves at the event when she alleged that she was told to go along with other board members even if she disagreed with them, a remark that was disputed at the event by Board Chair Mark Sebring, who was then yelled at by audience members.

The exchange occurred during the event’s question-and-answer period, when an audience member asked about the governing structure of the school board. After Wigfall gave a brief description, Bandel stood up and identified herself as a School Board member.

“One of the things I was told, right off the bat, is if we do not agree in the vote, I am supposed to just nod and say, ‘This is the way the board has decided to go at this time,’” Bandel said, prompting a response of dissatisfaction from the crowd.

She went on to say that she’s asked a lot of tough questions and at times the Board tries to change the subject. Sometimes the Board bundles action items into one vote, “and I’m going to be pushing back on that,” she said.

After a few more questions, Sebring stood up and introduced himself as the School Board chair.

“I am not the least bit pleased to hear that our newest member of the school board is leading you to believe that she is being told how to vote and she is being asked to keep quiet, because she doesn’t agree,” Sebring said.

“There has never been anything in our school district at the board level that would lead a person to believe that at all,” he said.

Sebring said that Owatonna residents have a “good school district,” “outstanding leadership” and “a school district every one of you can be very proud of.”

“It saddens me to think that someone would come in, and lead you to believe that they are being subverted with their work participation,” he said before several people in the crowd cut him off, demanding that he answer where he stands on CRT. He said he doesn’t know if he knows enough about CRT before he was drowned out by several audience members.

Audience members flocked to Bandel following the event to further discuss her comments.

When asked to clarify her comments about School Board votes, Bandel said Wednesday that she read in a booklet or handout given to her by school district administration that she was supposed to nod if she didn’t agree with the School Board.

“And it was just, if the press were to ask me for a comment that I say something so it looks like we are all on the same page and then refer them to the superintendent,” she said.

Bandel said on Wednesday that she is not being forced to vote a certain way, but can see how her statement’s during Tuesday’s event can be “confusing.”

When asked if she was referring to a consent agenda when she mentioned that the board bundles action items into one vote, she responded, “That could possibly be what I was referring to.”

She said she is aware that items can be removed from the consent agenda and discussed further at her or any other board member’s request.

Bandel said she attended Tuesday’s event to learn more about CRT as well as to get a feel for how the community feels about it. Bandel said on Wednesday that her own personal opinion is that CRT “seems to target a group of people and kind of give them special treatment.”

She said that she doesn’t find CRT to be something that is going to heal the country, given what has gone on in the last year.

When asked about the exchange on Wednesday, Sebring said it is more appropriate for him to work directly with the school board member than comment on it. Sebring denied that any school board member or administrator has forced a member to agree to vote a certain way.

Sebring said he attended the meeting to hear more about CRT and had been asked to attend.

“It’s a relatively newer issue that we’re beginning to hear about,” Sebring said.

It’s to the benefit of himself and to everyone in the community that he learns as much as he can on all sides of an issue, he said. He also clarified that he is still learning about the topic and was there to hear out the different voices.

“At the board level we don’t microscopic manage what course is introduced when and what the curriculum topic by topic looks like,” Sebring said.

Sebring once again restated that CRT is a topic that needs greater understanding on all sides and that he is early on in the process of coming to understand it.