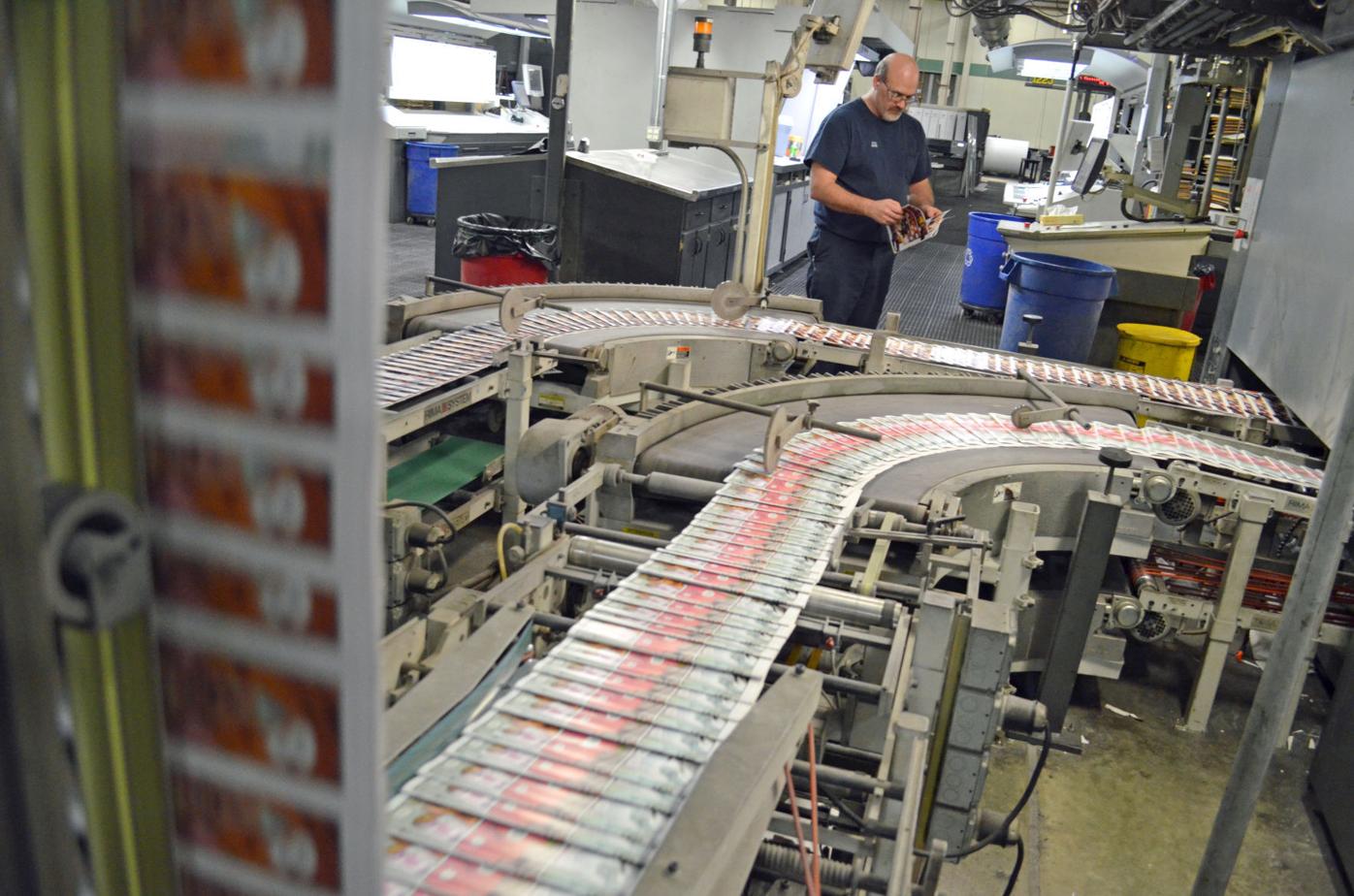 Second Pressman Chad Boone inspects printed material coming off a press at the Quad/Graphics Waseca plant which announced in February it would focus on short-run publications as part of a company restructuring plan. Tuesday, management announced the plant’s closure. (County News file photo) 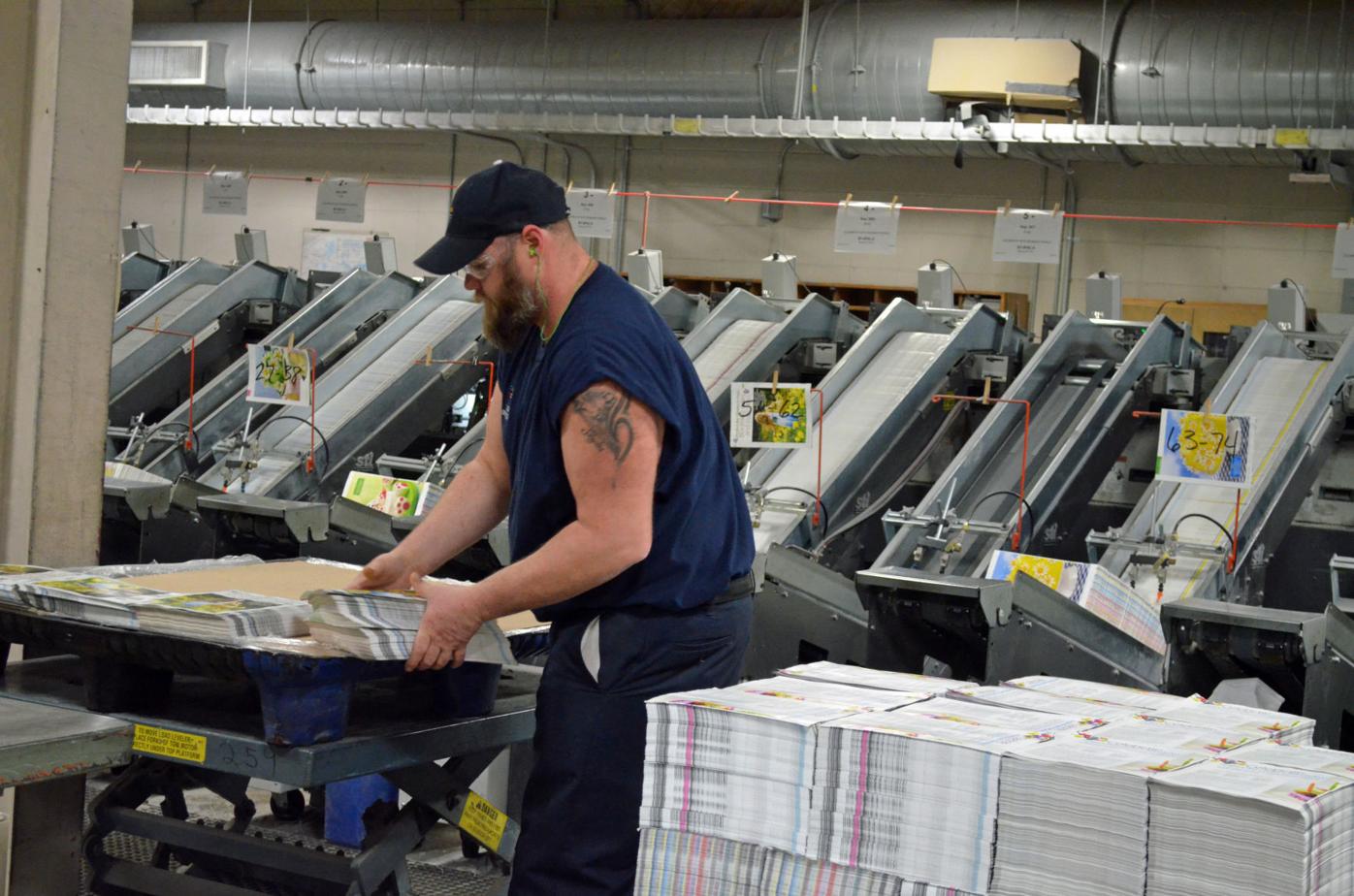 Jesse Unverzagt, an operator at Quad/Graphics in Waseca, takes printed pages fresh from the press and loads them onto machines the will collate and bind finished magazines. (Suzanne Rook/Waseca County News)

Second Pressman Chad Boone inspects printed material coming off a press at the Quad/Graphics Waseca plant which announced in February it would focus on short-run publications as part of a company restructuring plan. Tuesday, management announced the plant’s closure. (County News file photo)

Jesse Unverzagt, an operator at Quad/Graphics in Waseca, takes printed pages fresh from the press and loads them onto machines the will collate and bind finished magazines. (Suzanne Rook/Waseca County News)

Waseca’s biggest employer, Quad/Graphics, announced this week it’s eliminating 50 positions as part of a restructuring plan designed to better position the plant for the future.

Affected workers will be offered other opportunities within the company, said Claire Ho, director of corporate communications. More experienced employees, mostly press and finishing operators, will be eligible for a $10,000 relocation payment and a $10,000 commitment bonus provided they remain with the company for another two years. Others could qualify for the relocation payment only.

The company now employs 488, though it had about 750 workers when Quad/Graphics bought Brown Printing in April 2014. The position cuts and reduced hours of operation are a response to lower readership for print products which has challenged the industry.

The changes announced this week will allow the plant to focus on special interest publications, called SIP in the trade, said Ho. Those are shorter-run publications with quantities between 5,000 to 150,000, and typically highlight hobbies, science, technology and medicine. Currently, the Waseca Quad/Graphics plant prints a variety of publications, both shorter runs and longer ones of up to 3 million like Vogue, Woman’s Day and Food Network Magazine.

The issue, Plant Director Randy Gordon said, is scheduling. Longer runs take significant press time, making it difficult to fit in the shorter ones. What often happens, he said, is longer-run jobs are done in segments. That requires significant time to breakdown and set up presses for the shorter runs and again to complete the longer-run jobs.

The continual rework and associated costs are what Quad/Graphics is looking to cut, necessitating the shift at the Waseca location.

“It will give them the ability to focus on where they really perform well,” Ho said of the Waseca plant.

Gordon said the plant is unique in that its presses can do a number of operations — specialized folds and perforations — that make it ideal for printing special interest publications.

The plant’s also moving to three shifts a day, Monday to Friday. Currently, it operates 24/7 with employees working 12-hour shifts with three days on, then four off. After another four at work, they take another three off.

Though Waseca City Manager Danny Lenz hadn’t been apprised of the particulars, he reinforced the idea that a healthy Quad/Graphics is important for Waseca and the region.

“Any time you have a large employer in town, keeping that business strong is critical,” he said, noting the trickle down effect it has on other, smaller businesses. It’s also key, he said, for a region to ensure diversity in local businesses. Doing so makes it less vulnerable economically if there’s a downturn in a particular industry.

And while the news from Quad/Graphics isn’t what the city, which is working to expand its industrial base, wants to hear, Lenz is heartened by a recent study from the city and data from Region 9 Development Commission that shows a large number of workers come from outside Waseca County.

The changes are part of Quad/Graphics’ Lean Manufacturing and Continuous Improvement Initiatives. The firm’s third quarter 2016 filing with the Securities and Exchange Commission described the initiatives as “on the production floor and with administrative support, in order to achieve improved efficiencies, reduce waste, lower overall operating costs, enhance quality and timeliness and create a safer work environment for the company’s employees.”

In January 2016, Quad/Graphics announced it achieved “sustainable cost reductions of $100 million” earlier than projected. Those reductions cut costs in response to decreasing demand for print. Plant closings, including two announced in early 2016, were a part of those reductions, according to company filings.

Ho, in a Monday interview, said changes in consumer habits beginning in 2006 have changed the way print media is consumed. In turn, those have impacted printing firms, including Quad/Graphics. Demand for catalogs decreased sharply as online shopping became more popular. Magazine subscriptions and advertising both fell during the Great Recession as readers consumed content in other ways, including the internet and via mobile apps.

According to a July 2013 report from the Pew Research Center, “from 2008 through 2012, ad pages were down an average of 32 percent in the magazine industry overall and 27 percent among the news magazines, not including Newsweek.” Newsweek ceased its print publication at the end of 2012.

That reduction in advertising translated to fewer pages rolling off the presses.

The company’s solution, Ho said, was to consolidate and “purchase really good companies with great talent.” In 2015, the company completed the acquisition of three firms: Marin’s International, Specialty Finishing and Copac Global Packaging.

The goal now, Ho said, is to capitalize on its strengths and provide quality products and services for its customers, which now includes digital services.

The changes, Ho said, may begin as early as March and will be phased in, but should be finalized sometime in the second quarter.

One-on-one conversations with impacted employees began Tuesday and were expected to be complete by week’s end.

Those who opt not to relocate will be assisted by the company’s Human Resources staff and a firm specializing in helping workers with job search skills, resume writing, training and financial planning, said Jane Downs, Quad/Graphics executive director of Human Resources. A job fair is planned to highlight opportunities in other Quad/Graphics locations.

Gordon, the plant director, understands the uneasiness among some workers at the plant, built in the late 1950s for the then-expanding Brown Printing. In January 2010, he was a World Color Press employee being offered an opportunity by the company’s new owner, Quad/Graphics, to relocate to Waseca.

The layoffs and accompanying changes are in no way a reflection on Waseca employees, he said.

“This is not a performance-based thing. This plant has performed well, people have stepped up to the plate and gotten things done when we needed them done.”

But given the pressures and constant fluctuations in print media and the printing industry, there’s no choice, he said.

“There’s no intent to close this plant,” said Gordon. “This is about securing this plant for the future.”

This story has been modified to correct which employees will be offered a two-year commitment bonus, and that a job fair for affected Quad/Graphics employees will highlight job opportunities at the company's other locations.

'This plant has performed well, people have stepped up to the plate and gotten things done when we needed them done.'