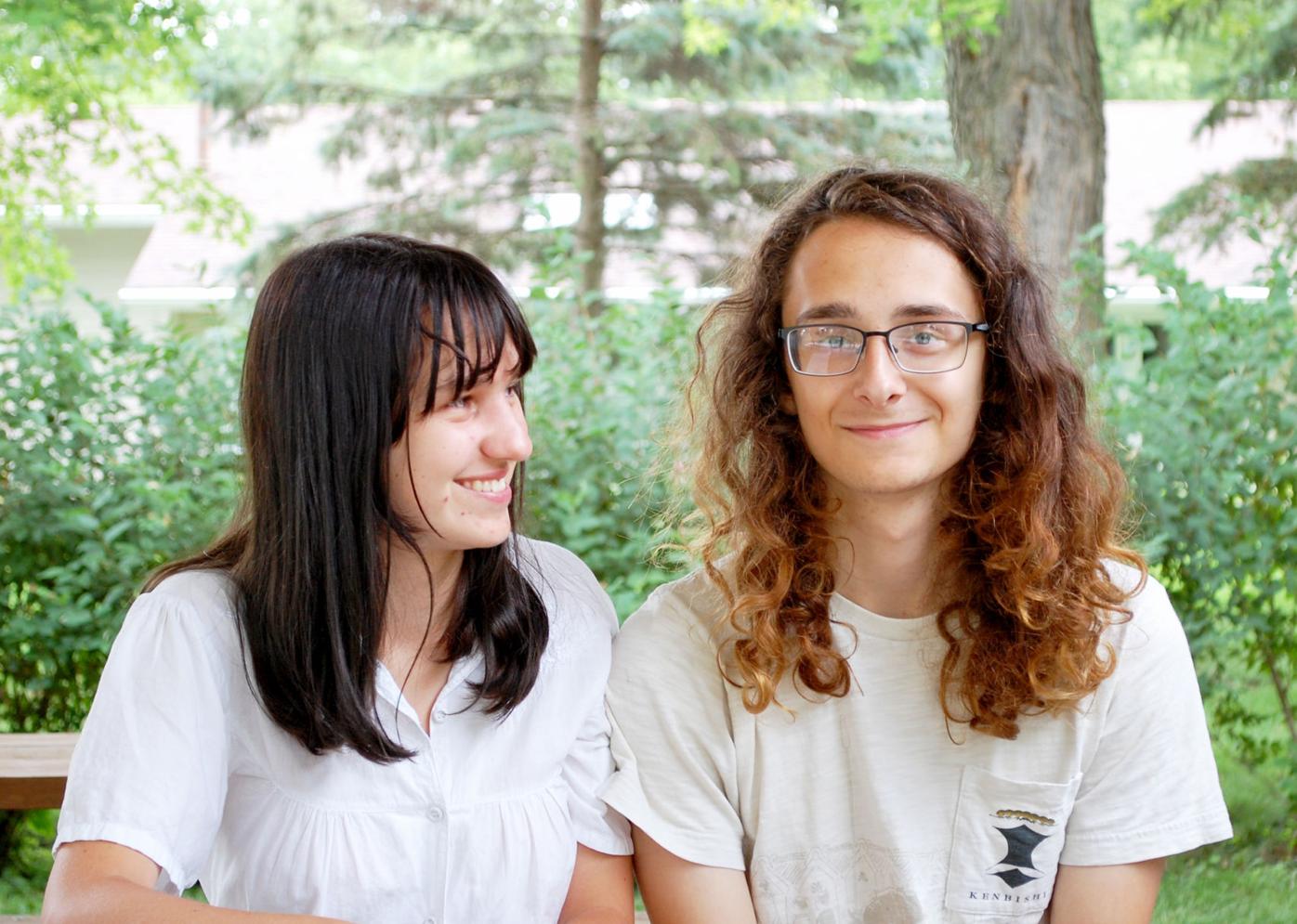 Rose Pommerenke, 17, and Jesses Thill, 18, of Waseca, are enrolled in the University of Tsukuba in Ibaraki Prefecture, Japan. They plan to move there to start school in September. (Julian Hast/southernminn.com) 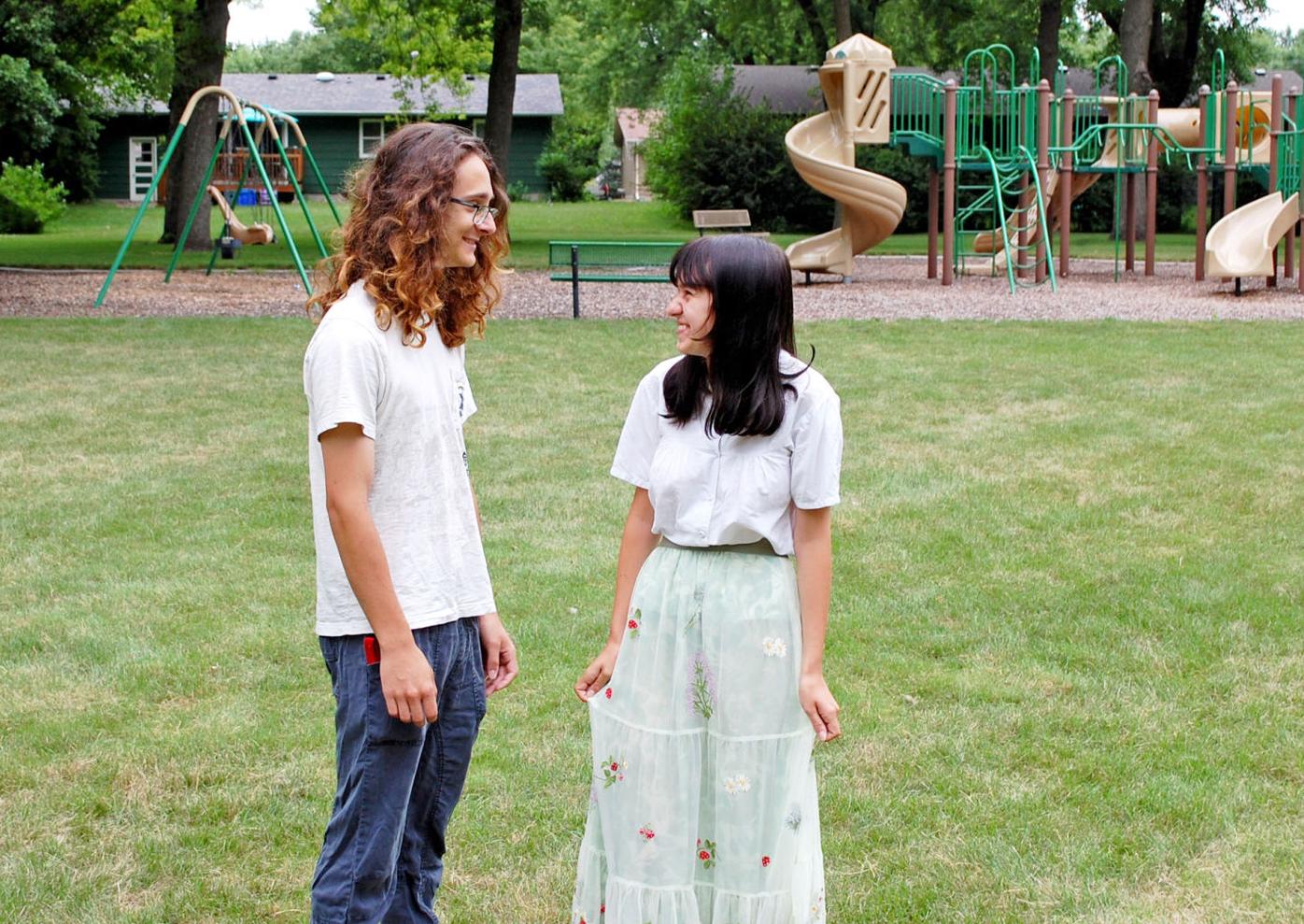 Jesses and Rose in Waseca’s Southview Park, which is Rose’s favorite “because it’s kind of like a hidden park,” Rose said. (Julian Hast/southernminn.com)

Rose Pommerenke, 17, and Jesses Thill, 18, of Waseca, are enrolled in the University of Tsukuba in Ibaraki Prefecture, Japan. They plan to move there to start school in September. (Julian Hast/southernminn.com)

Jesses and Rose in Waseca’s Southview Park, which is Rose’s favorite “because it’s kind of like a hidden park,” Rose said. (Julian Hast/southernminn.com)

Jesses Thill insists that the story of how he and Rose Pommerenke met and started dating is a “boring story.”

“We had a locker next to each other, we talked and we’ve been together since,” Jesses said.

At the time, they were middle schoolers — Jesses in eighth grade, Rose in seventh — at Waseca Junior/Senior High School. Today, they are recent high school graduates enrolled in the University of Tsukuba in Ibaraki Prefecture, Japan. Assuming Japan opens the border to international students from the United States by the fall, they will fly out in September.

Jesses, who is 18, says neither of these facts — that he and Rose, who is 17, have been in a relationship for longer than anyone their age who they know, and that they are leaving their rural Minnesotan hometown as teenagers for an East Asian city — were planned.

“I kind of just applied to this program (in Japan) that nobody gets into, but I didn’t really want to go to college in the U.S. I didn’t know what I was doing,” Jesses said.

Jesses was accepted into Tsukuba’s interdisciplinary engineering program with a full scholarship from the Japanese government. Rose was accepted as well, into their biology program, and will pay a tuition of about $5,000 a year.

Financial concerns aside, though, Rose and Jesses have been fascinated by Japan for some time. It all started when Rose went to Thailand in fourth grade. On the flight from the United States to Thailand was a layover in a Japanese airport. There, Rose discovered Japanese candies and a toilet with a heated seat. Three years later, she started studying Japanese with a private tutor and enrolled in a Japanese camp.

“And I wasn’t about to spend another month of not talking to her, so I got in on that,” Jesses said.

They ended up going to the camp together. This was how Jesses also became intrigued by Japanese culture. Later on, he would visit St. Paul, where he would eat at a Japanese restaurant for the first time.

“Then I wanted everything to do with Japan,” Jesses said.

Food is perhaps where Rose and Jesses’s passion for all things Japan becomes most intense. Talking about it, both of them say that Japanese food is far better than American food.

Explaining how they avoid eating the cuisine of the country they live in, Jesses said they just stick to the produce section and then make their own food.

“The Asian section has pretty much all the fundamentals of Japanese cooking,” Rose explained. “Soy sauce, mirin, miso, dashi…”

When it came time to start thinking about college, Rose and Jesses expressed misgivings about American college culture, and how they would do long distance. Both strongly disliked high school and figured college might just be more of the same. The reason Rose graduated so early, she said — skipping eighth grade and 12th — is that she disliked high school and its cliques as well.

“I was just really weird,” Rose said. “I didn’t have a lot in common with people.”

Regarding the duration of their relationship — all of high school, and going into college — Rose and Jesses say they don’t feel like they’re missing out on anything by not being single. This was the case even when their relationship was long-distance for their last two years of high school, when Rose moved to Maryland so that she could take more accelerated and AP classes, and graduate earlier.

“We thought we were never gonna get through that,” Rose said.

Thinking they would probably break up once she left Waseca, they were surprised to find themselves talking on the phone every night. And still together.

Regarding their upcoming move to Tsukuba, Rose and Jesses say they’re not nervous. That wasn’t always the case, though.

“When we were in the college application process, there was a lot of worry, a lot of tension,” Rose recalled. “Will we not get in, will one of us get in and not the other, will we only get into colleges in the U.S. and really far apart from each other….”

In terms of relocating to a foreign city halfway around the world, though, they are only excited. Even after college, they insisted, they will “definitely” not live in the U.S.

Thinking about their plans, Jesses expressed pride in the increasing their connectivity of the world.

“There’s always been a way to leave your area, but it’s been harder in the past,” Jesses said.

Rose agreed, reflecting on the opportunities afforded young people like them in the modern world.

“You can be in Waseca and still have the chance to go anywhere in the world and do anything you want,” she said. “You don’t need to live in New York City to have opportunities.”