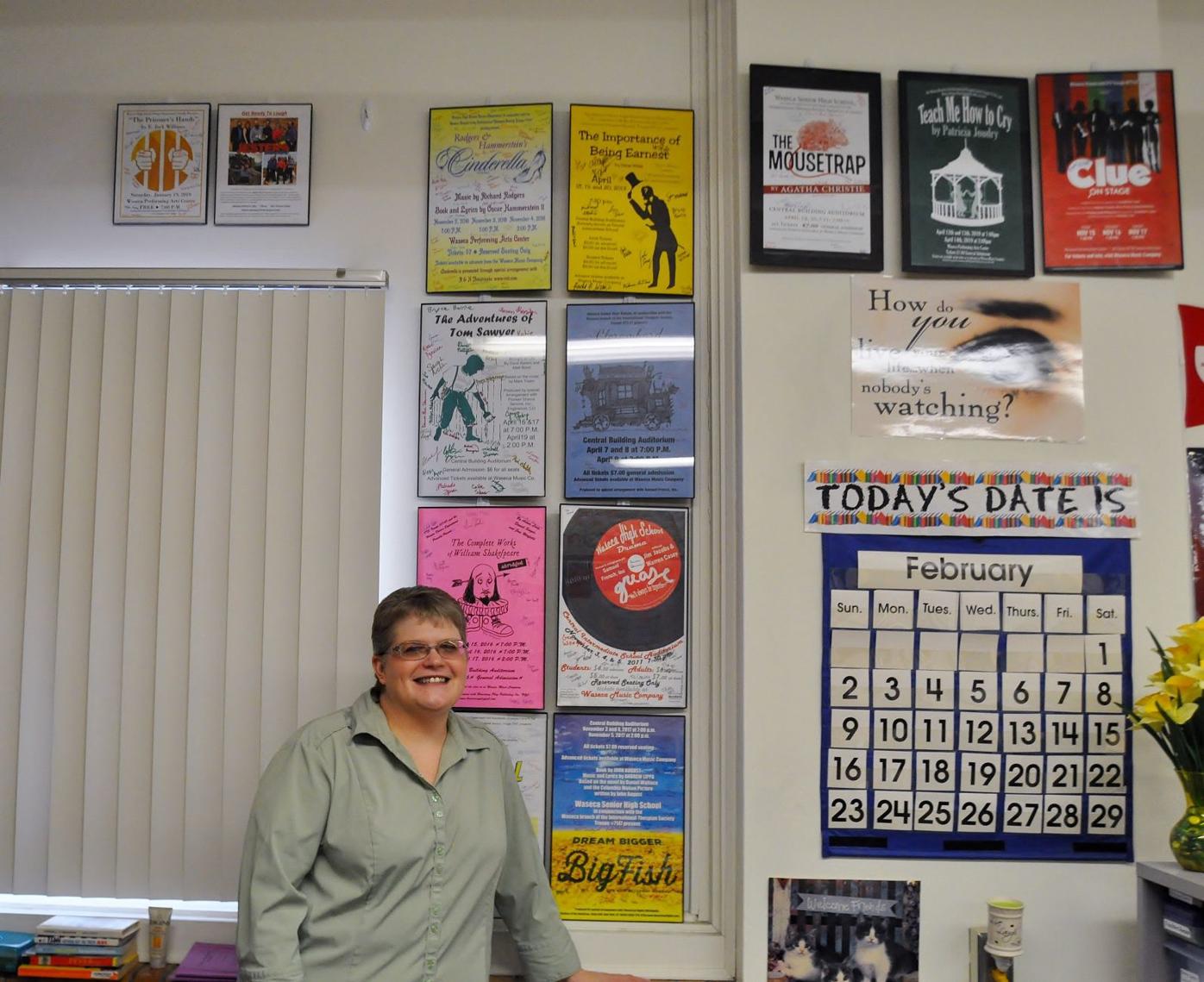 Dawn Skinner has been teaching and directing plays in the Waseca school district for the past 18 years. (Bailey Grubish/Waseca County News) 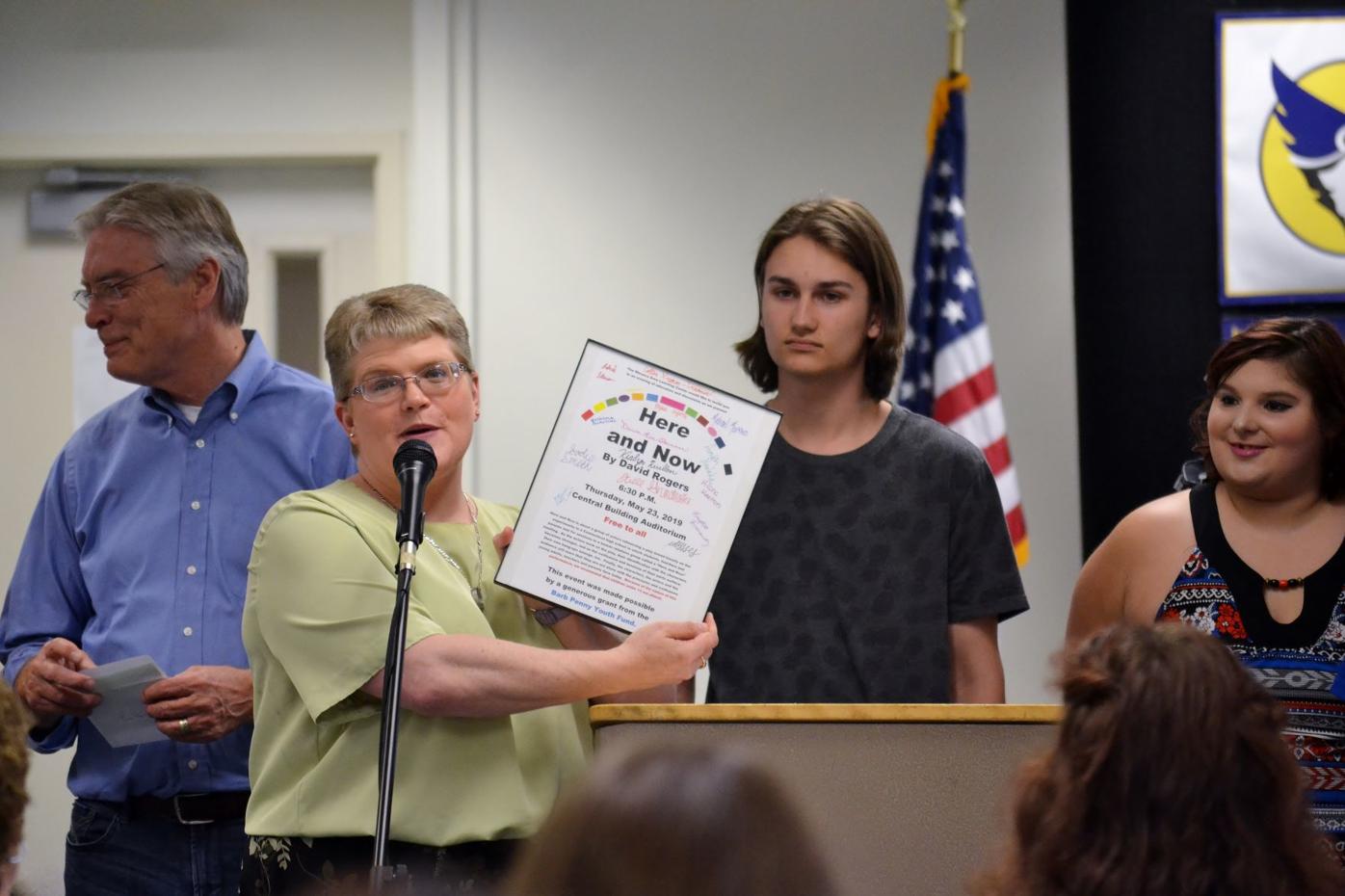 Dawn Skinner is a language arts and art teacher at the Waseca ALC and with her theater degree and drama club involvement she implements theater classes for her students. Last spring Skinner received grant money from the Waseca Area Foundation from the Barb Penny Youth Foundation for a student play performance of "Here and Now". (Bailey Grubish/Waseca County News)

Dawn Skinner has been teaching and directing plays in the Waseca school district for the past 18 years. (Bailey Grubish/Waseca County News)

Dawn Skinner is a language arts and art teacher at the Waseca ALC and with her theater degree and drama club involvement she implements theater classes for her students. Last spring Skinner received grant money from the Waseca Area Foundation from the Barb Penny Youth Foundation for a student play performance of "Here and Now". (Bailey Grubish/Waseca County News)

Going above and beyond is natural to Dawn Skinner.

She is the Waseca Area Learning Center language arts/art teacher and a director for the high school drama club.

Skinner gives her time to the kids of Waseca County.

“Dawn is truly the heart of the drama department,” Waseca high school language arts teacher Karen Pfarr-Anderson said. “The most amazing thing Dawn does is she can create a show entirely top to bottom independently. Most directors have help. They have someone who takes care of the set or the costumes or something. She does it all from sets to props to blocking to costumes. It’s really remarkable and hugely time consuming for her. She does it because she loves our kids and she loves theater.

“She also runs the International Thespian Society chapter for Waseca high school and does so for zero pay. Again, this is a ton of time and work that she does because of her dedication to the drama department and our kids. She is always seeking new opportunities for our kids to learn about theater and what it has to offer. She is an outstanding colleague who has helped me numerous times, always voluntarily, to get a show to completion. Without Dawn, our drama department would not be nearly as successful as it is.”

Skinner has been directing plays for the Waseca High School Thespian Society, drama club, for 18 years. She does at least one play a year and up to three plays a year. This school year she directed the two main stage plays at the high school. In the fall of 2019 she directed “Clue.”

Skinner's theater involvement doesn’t stop with directing plays. She also wrote the theater classes that are offered through Waseca County Community Education. The drama students are trained by Skinner to teach the classes to others in the community as a way to give back.

Her position on the board is volunteer coordinator. She makes sure all of the people who attend the festival are taken care of and everything is organized for competitions.

Each year the organization hosts a conference and this year it was in January. Skinner was able to take students to this conference competition to compete for national awards. Some of the categories students competed in were stage management and monologue. This is an opportunity for the students to meet other teachers from around the state and other students working on the same competition and to learn from them.

In the future she is hoping to take on the role of the southern Minnesota liaison position for the board to get more schools outside of the Twin Cities involved. Waseca joined about eight years ago and the organization continues to grow.

“The goal is to be accessible to more people and make sure more people hear our message and join our efforts to make theater an important matter,” Skinner said. “Arts have always been the way people connect with the world so that's important for me.”

Theater is a large part and a passion for Skinner so she teaches theater classes four times a year to her ALC students.

There is a production class where the students build the set for the high school play that she directs.The other class is an acting class. Through this class the students pick a theme they want to talk about and then perform a play based on it.

The most recent theme was bullying.

“We have chosen (bullying), because we are ALC and we want to talk about themes that are underrepresented in society,” Skinner said. “So last year we did a play called “Here and Now” which was about the problems nobody wants to talk about and this year we chose bullying.”

She went on to say the students pick the specific play that they rehearse, light and build sets for. Once everything is done they perform for the public free of charge as a kind of public service.

For the play this year there were 16 students on stage to perform on bullying.

“Every single one of the kids who took the class performed, which is a huge success,” Dawn said. “These kids are afraid to be in front of anybody. They have been minimized, they have been ostracized and so for them to stand in front of a group of community members and to perform these things is a huge deal for them.

“I think that if I can help a kid get over anything that's stopping them whether it’s I don’t know how to read or I’m not good at reading or I’m slow at reading ... We've got a lot of options where you don't always have that in a class of 35. So one of the nice things being in the ALC is being able to find the ways around the problems that have been causing them to not succeed and that's what I like about my job.”

Skinner is not the standard language arts teacher that students have interacted with before. She brings theater to them but she also takes the time to help students with their individual needs as well as baking every morning for them so they have a breakfast option.

She spoke on teaching the students real world skills they are going to need in the future along with academic work.

Since there are smaller classroom sizes Dawn has found she is able to challenge her students more with college level texts because she can take them through it as opposed to a larger class size.

She spoke of the image that people think of ALC students and how it is a negative image. The students and staff work on community involvement to change this image to a more positive one. The ALC students have done maybaskets and donated tie blankets to the senior center to give back to the community.

“We’re getting a lot of kids coming here for non-traditional reasons,” Skinner said. “The most common reason we have students come over here now is social anxiety. We have several students who are working on their social anxiety in a small setting but still with people.”

The ALC has math, English, history and science teachers on staff along with various support staff.

“It’s a pretty awesome staff and we talk a lot,” Skinner said. “Not just about what our kids are doing educationally, but how can we help with their life skills.”

Skinner is a licensed theater teacher with her degree from College of St. Benedicts. Though through the ALC she teaches all forms of art using online tools and resources to best teach the students.

She started her teaching career in Mississippi before moving back to Minnesota and finding a job in Waterville. After teaching in Waterville her position was moved to part-time so she started looking for another job and found an opening at the Waseca High school. She taught at the high school for three years before moving into her role at the ALC.

“Waseca is an incredible place to do art,” Skinner said. “The community supports its arts incredibly well. It's the best support I've ever had any place I've worked. I think the fact that Waseca values it’s arts so much is probably the biggest reason it's not only where I wanted to teach but where I wanted my kids to go to school and where I want to build my life.”

Waseca City Council: What are the candidates' vision for Waseca?

This story has been updated to include Ward 2 candidate John Mansfield's responses. Read more

Waseca School Board: What do the candidates see for Waseca schools