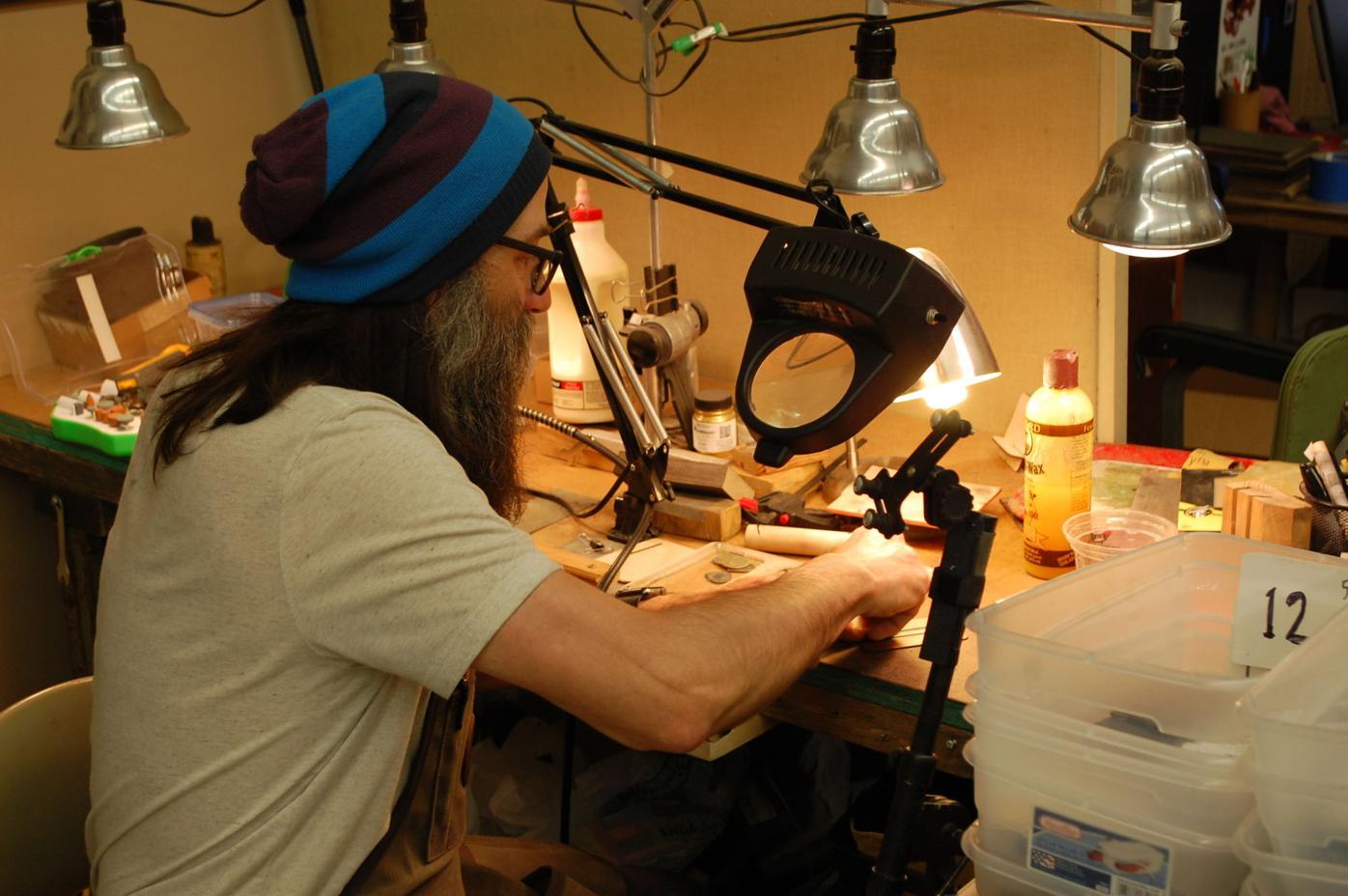 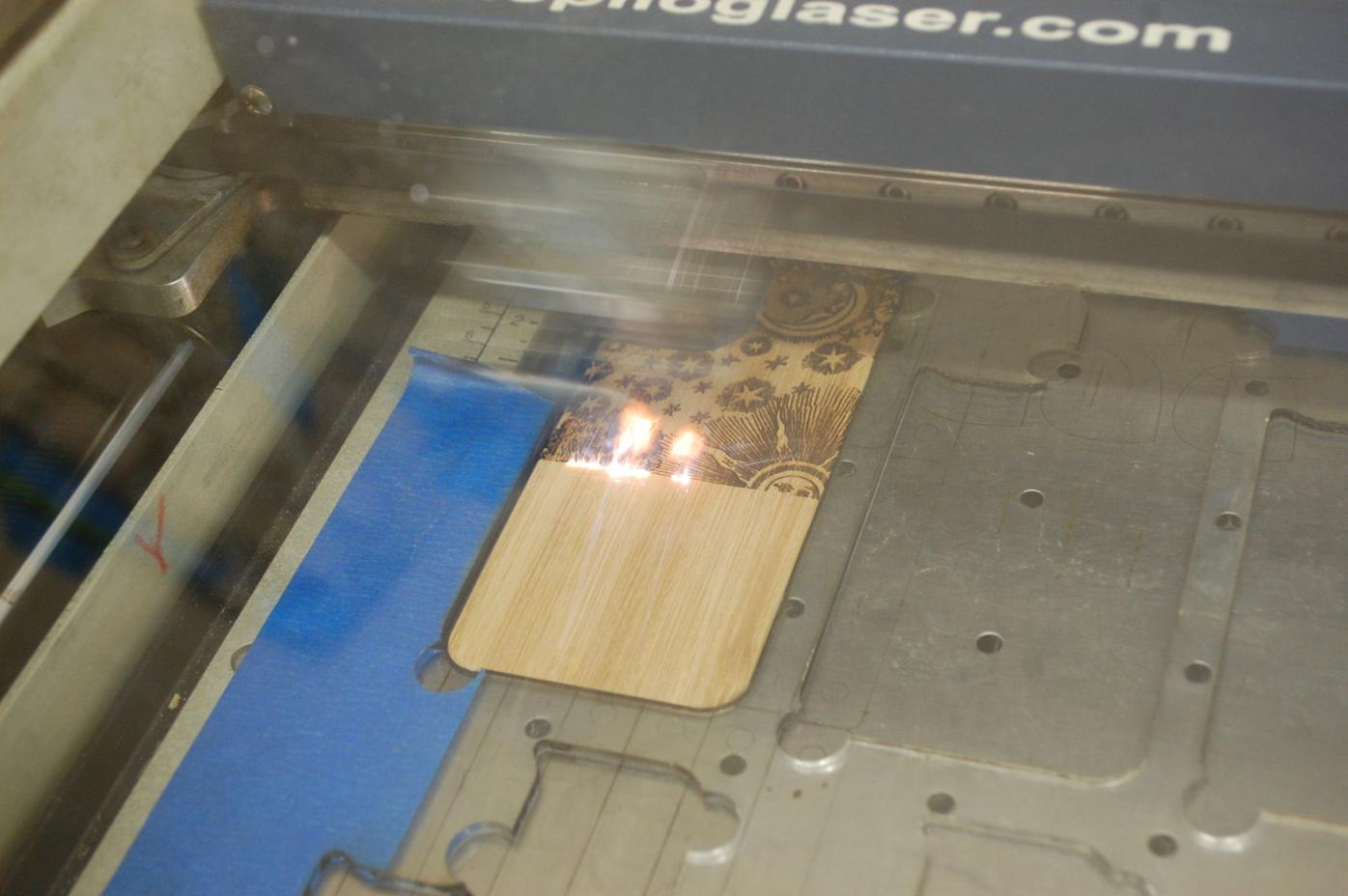 A laser printer engraves an illustration through the bamboo surface of a Richlite phone case. (Julian Hast/southernminn.com)

A laser printer engraves an illustration through the bamboo surface of a Richlite phone case. (Julian Hast/southernminn.com)

Jon Lucca’s childhood friend John Woodland had to repeatedly buy cases made out of wood for his new iPhone 4. Some cases would last weeks, some only days before they would break. The year was 2011.

The solution to the breaking phone cases has become the Waseca-based Twig Case Company that sells unique iPhone cases all over the world.

Woodland, who owns a guitar parts manufacturing company in the Twin Cities, was designing a guitar using a material called Richlite for the bridge and fingerboard. The material traditionally used for this purpose was ebony wood, but because ebony is endangered, guitar designers were looking for alternative materials. It occurred to Woodland that the material would make an excellent phone case. He called up Lucca to tell him his idea.

“Richlite themselves were like, ‘You’re never gonna be able to do that,’” Lucca recalled. “And then we did it, and they were like, ‘Oh, wow, that’s really neat.’ Nobody really messed with Richlite at super-small scale.”

Invented in the 1940s and produced in the Richlite factory in Tacoma, Washington, Richlite is a material made from thin slices of recycled paper that is saturated in phenolic resin, baked at extreme heat, and crushed.

It has been used to make the nose cones of Boeing’s aircrafts because it’s strong and doesn’t swell or shrink when exposed to humidity or inclement weather. Though it feels like wood, its strength means that it can form a phone case that stays tight on the phone, rather than expanding and falling off.

“They also thought that it couldn’t be protective that thin,” Lucca said.

Lucca would throw his phone across the room with his Richlite phone case on in response to that particular concern from Richlite staff. He also put the case in boiling water, among other “torture tests,” to test its durability.

But the thing that makes Lucca’s phone cases truly unique is the detail in their design. Engraved through a laser printer on bamboo that’s fused onto the Richlite, using designs from illustrators in neighboring cities and the Twin Cities, the artwork on the phone cases is incredibly intricate, a quality not possible on a wood phone case.

Lucca and Woodland formed the Twig Case Company in October 2011 and then worked hard until July 4, when their website went live and they officially opened for business. Woodland has since left the company to focus on other work.

Pretty soon, Lucca and Woodland’s phone cases were in Apple publications, being picked up by distributors in Russia and Japan, and also by Woodland’s contacts in the music industry, among them Norah Jones, Sonic Youth, and Wilco.

Despite the usefulness of that good publicity, though, Lucca contends that no advertising campaign can match the power of a good product.

“Advertising is just expensive, and more and more ineffective,” he explained, “so it’s more about making something consistent and good and cool. I never wanted to be like those entrepreneur YouTubers.”

That said, he acknowledges the necessity of reaching out to potential customers through social media.

In addition to phone cases, Twig Case Company also produces guitar picks — called “Leaf Picks” — and minimal wallets. But the iPhone cases are the bestsellers by far. And given the consistent and somewhat longstanding appetite for iPhone cases, Lucca doesn’t see Twig Case changing an enormous amount over the next few years.

“Our caboose is hitched to Apple. We only make cases for iPhones. I don’t really see that changing, unless someone else was coming out with a phone that didn’t come out with a new model every few months,” he said, referring to Android’s frequent phone model updates, a tick that makes building custom phones nearly impossible for a small business like Lucca’s.

Reflecting on his life in Waseca, where he moved in 2000 after meeting his wife in the Twin Cities, Lucca said it would have been harder to open his business had he not moved. His work space is spacious, allowing in plenty of natural light. Rent in the Twin Cities would have made the business financially prohibitive.

“I’m literally a block from the post office, two blocks from the hardware store, and I live down the street,” he said.