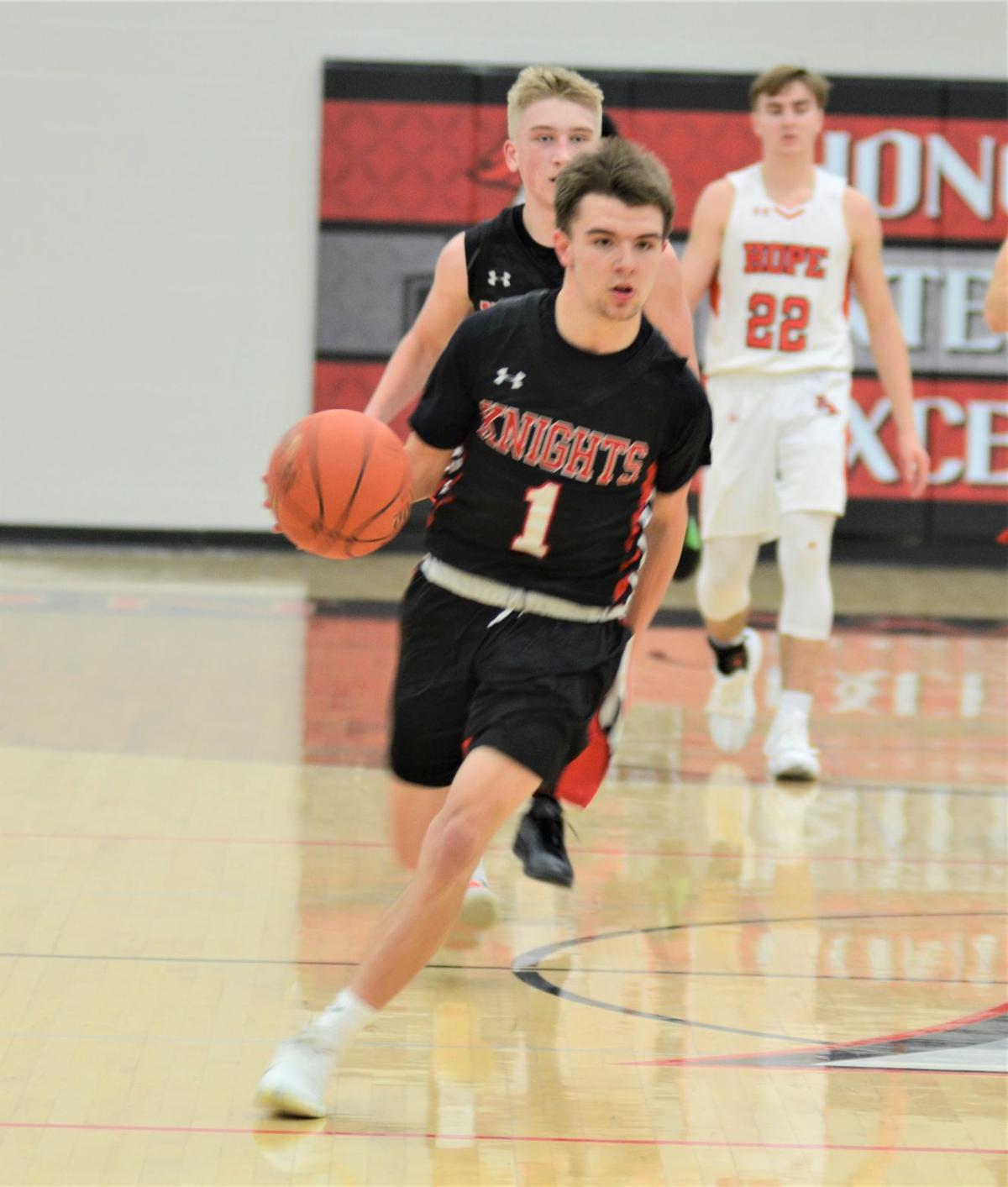 K-W senior Tate Erlandson gets out ahead of the Hope Academy defense for an easy layup in Friday’s non-conference game. Erlandson finished with 20 points, and the Knights rolled to a 94-71 victory. (Photos by Jason Hommes/Faribault Daily News) 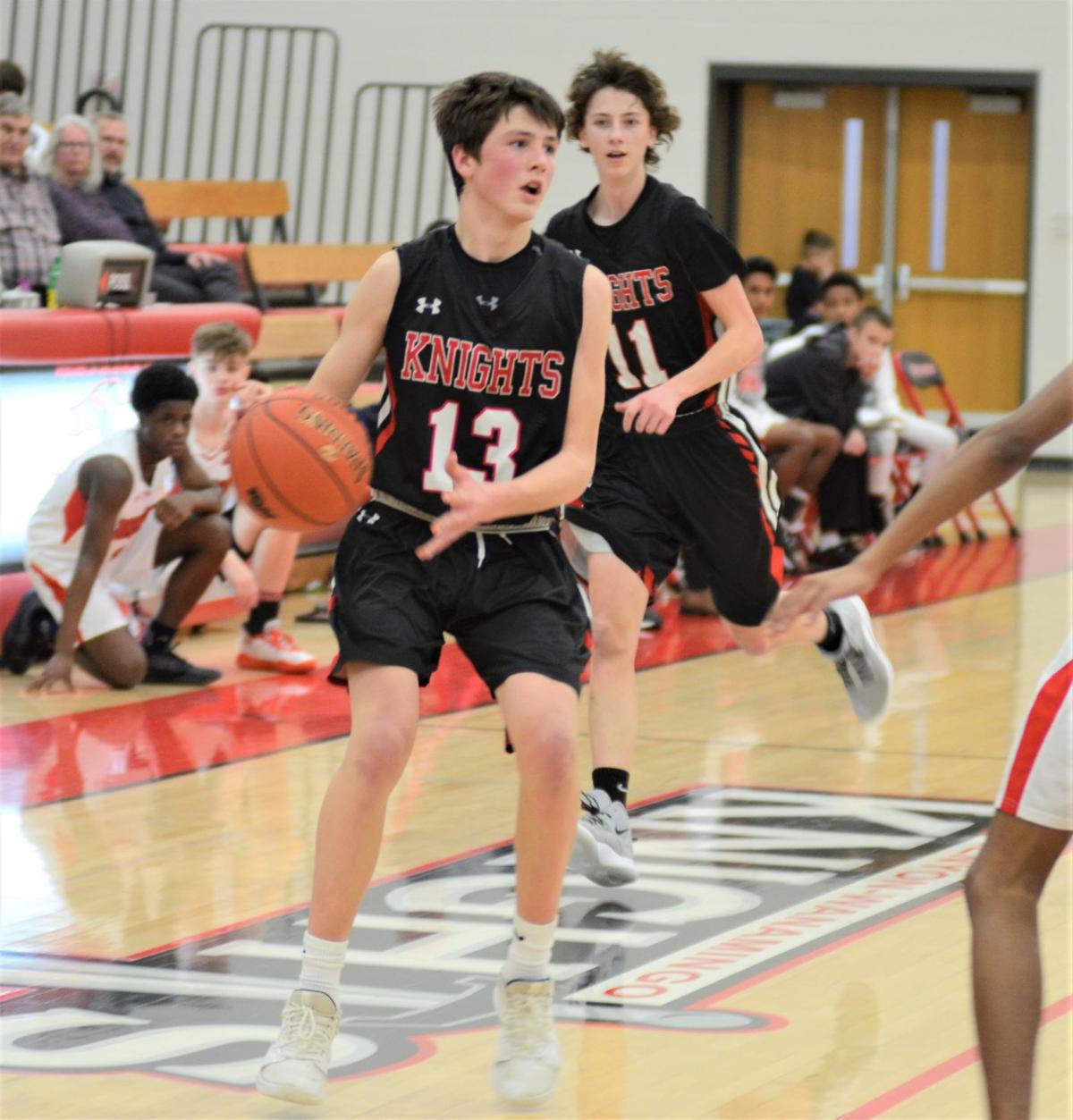 K-W sophomore breakout Laden Nerison looks for a way to move through the Hope Academy defense. Nerison led the Knights with 24 points, and K-W won 94-71.

K-W senior Tate Erlandson gets out ahead of the Hope Academy defense for an easy layup in Friday’s non-conference game. Erlandson finished with 20 points, and the Knights rolled to a 94-71 victory. (Photos by Jason Hommes/Faribault Daily News)

K-W sophomore breakout Laden Nerison looks for a way to move through the Hope Academy defense. Nerison led the Knights with 24 points, and K-W won 94-71.

The Kenyon-Wanamingo boys basketball team put on an offensive showcase Friday evening against Hope Academy. The Knights scored 47 points in each half and ended up blasting Hope Academy by a score of 94-71.

For the Knights, the game was their third win in a row, and they’re now 5-5 on the season. They were able to return to the .500 mark thanks to a balanced effort throughout the entire game against Hope.

“It was definitely our best offensive output of the season,” K-W coach Brent Lurken said. “We had four guys in double figures, and I thought the guys did a great job of moving the ball and attacking the basket. They played very unselfishly and really did a nice job of getting out in transition.”

Sophomore Laden Nerison continued to impress for the Knights by leading the team with 24 points in his highest-scoring game of the season. Senior Tate Erlandson also had a strong game with 20 points, while sophomore Trevor Steberg scored 19 and senior Corey Knott chipped in 11.

On defense, the Knights’ main objective was to contain Caleb Hoilien, whom they viewed as Hope Academy’s best player, and while Hoilien managed 21 points in the game along with 10 rebounds and 10 assists, Lurken was pretty pleased with his team’s efforts against him.

“Defensively we gave up more layups than we’d like to,” Lurken said, “but we were able to contain No. 1 (Caleb Hoilien) and I thought Laden Nerison and Riley Horn — we had a few different guys we threw at him — and I thought whoever we put on him did a nice job of defending and making him work for his points.”

Kaleb Dube had a strong game for Hope Academy with 23 points, but he and Hoilien were the only ones to reach double digits in points.

One of the biggest differences in the game came at the 3-point line; K-W hit 13 3-pointers, while Hope Academy sunk just six.

“We shot the three very well, with 13 threes in 27 attempts,” added Lurken. “Overall it was just a great shooting night for the Knights.”

The win didn’t improve K-W’s record in the Hiawatha Valley conference (K-W is 0-2 in the Blue Division), but the Knights’ offensive surge and their three-game winning streak should be seen as good omens ahead of K-W’s Tuesday clash against the Triton Cobras (2-6 overall, 0-1 Hiawatha Valley Blue).

The Knights and Cobras are each searching for their first conference win of the season, but K-W has looked stronger lately, whereas Triton has dropped three straight games. The Cobras’ last win was an 88-63 victory over Bethlehem Academy on Dec. 12, and they also defeated Chatfield 77-57 back on Dec. 3.

Lurken expects his team to be ready to go against the Cobras and said he’s been pleased with what he’s seen from the Knights in practice lately.

“The guys are already picking up some new stuff we’re working on in practice, which is good to see,” Lurken said. “As far as we’re concerned, it’s great to get a few wins, but really we just need to stay focused and keep getting better in practice every day.”