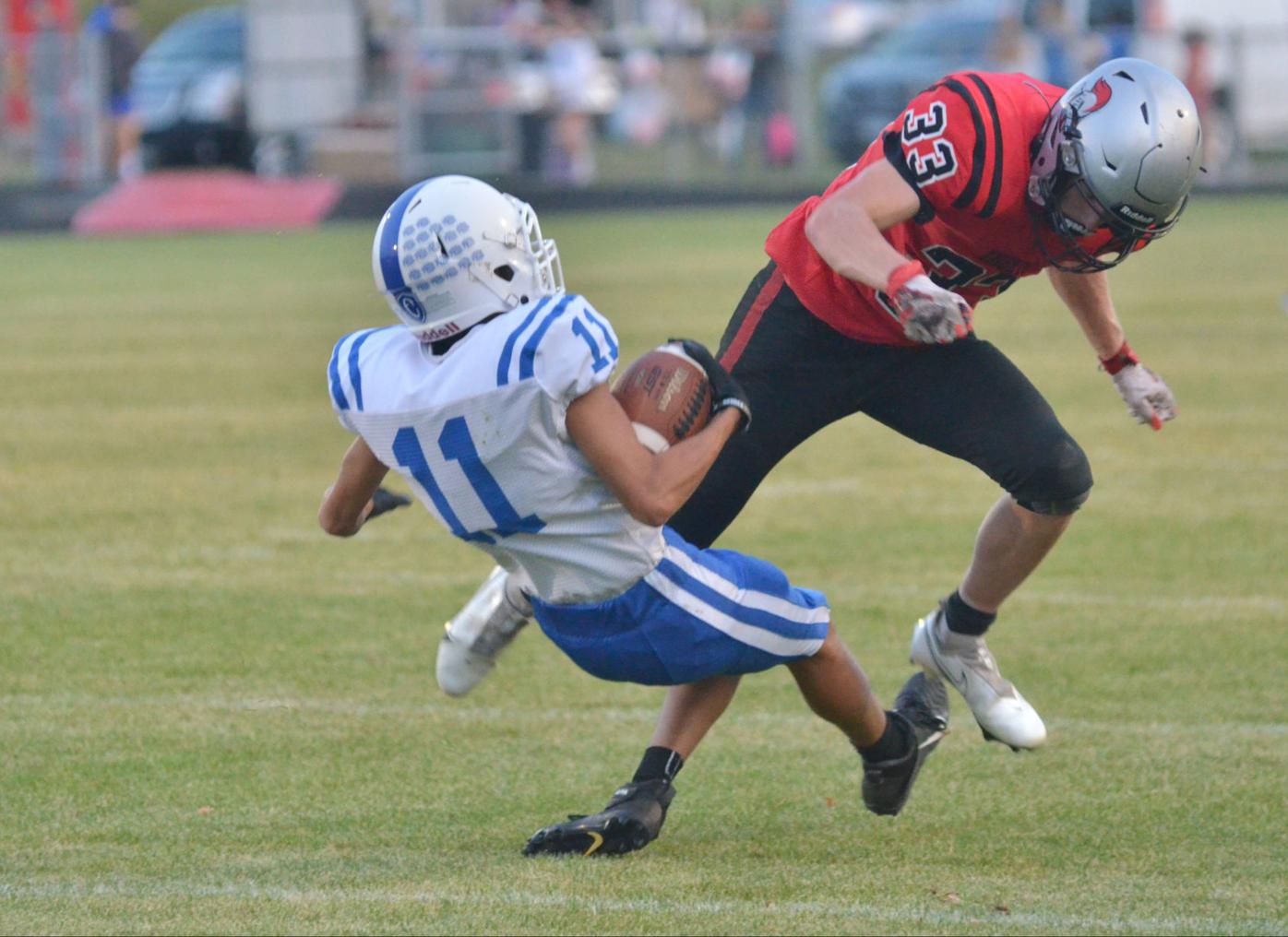 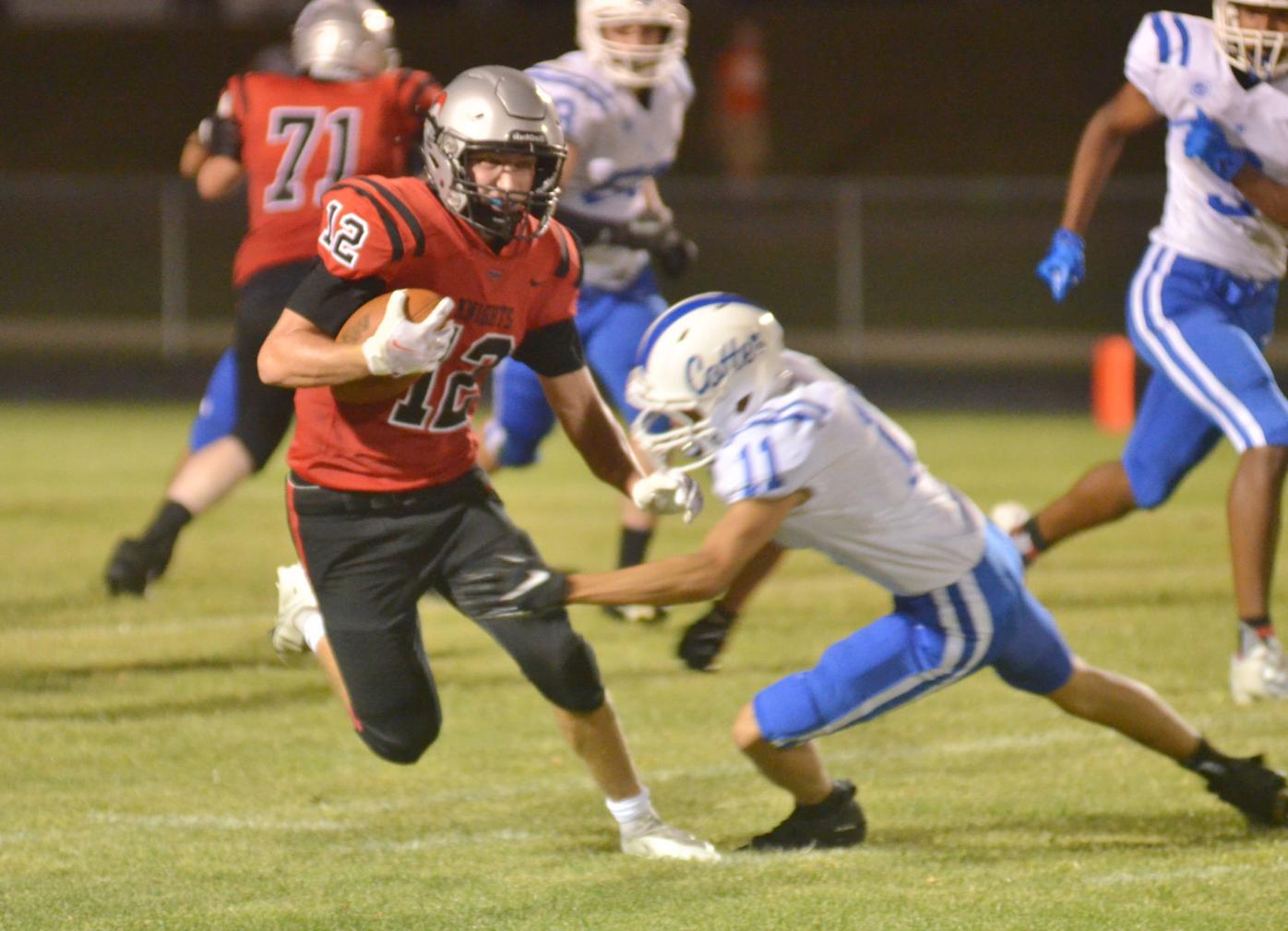 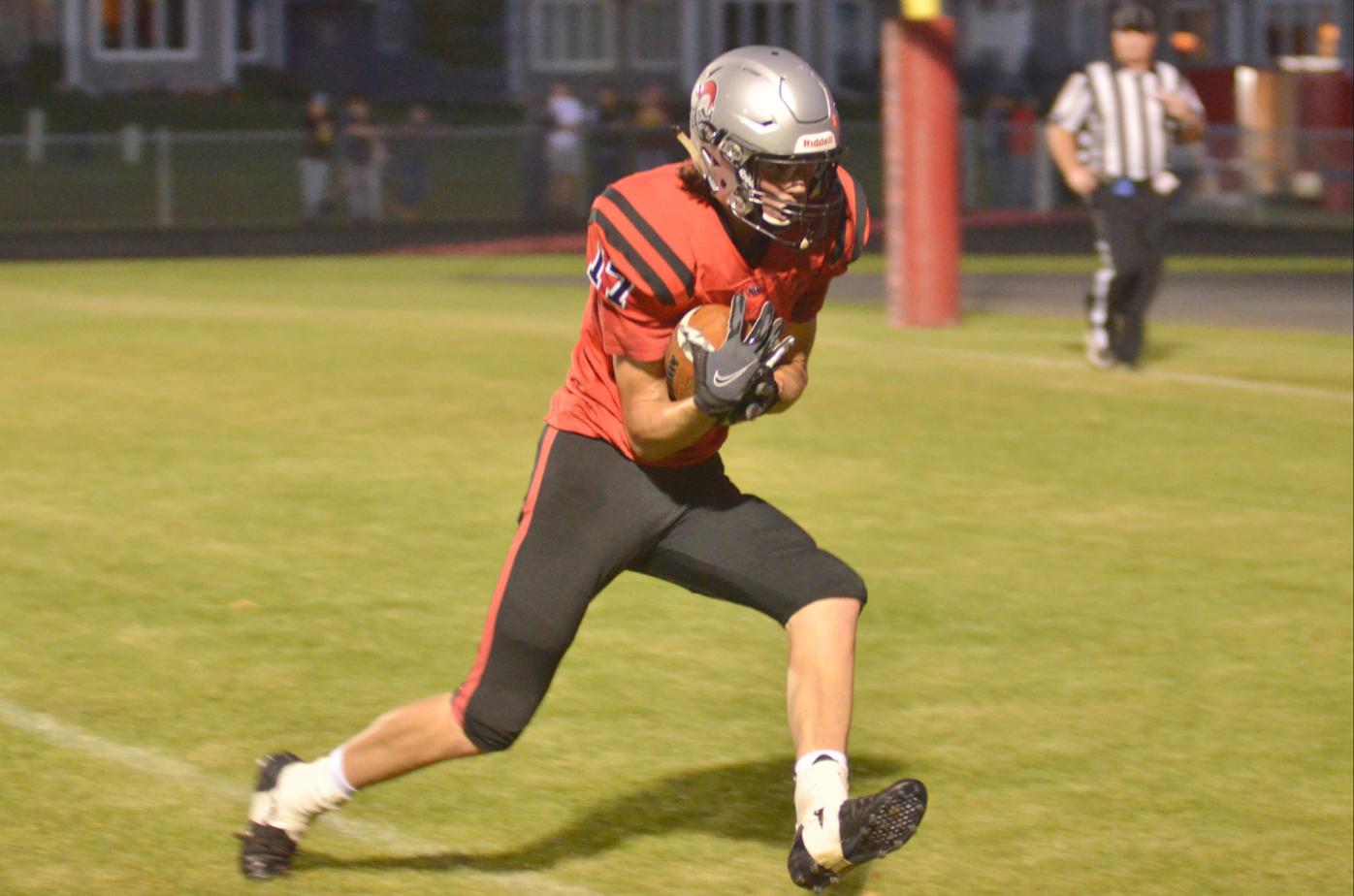 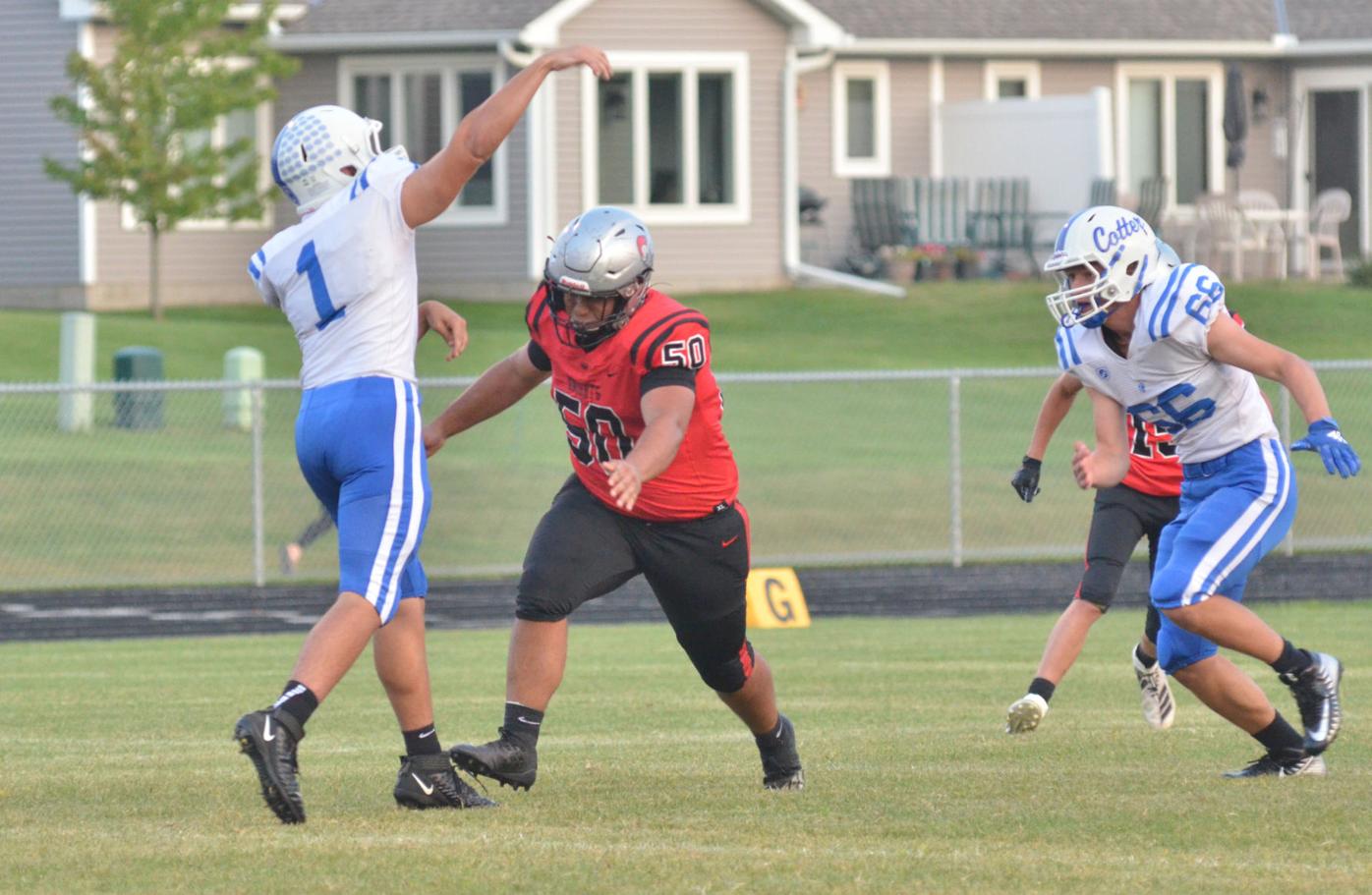 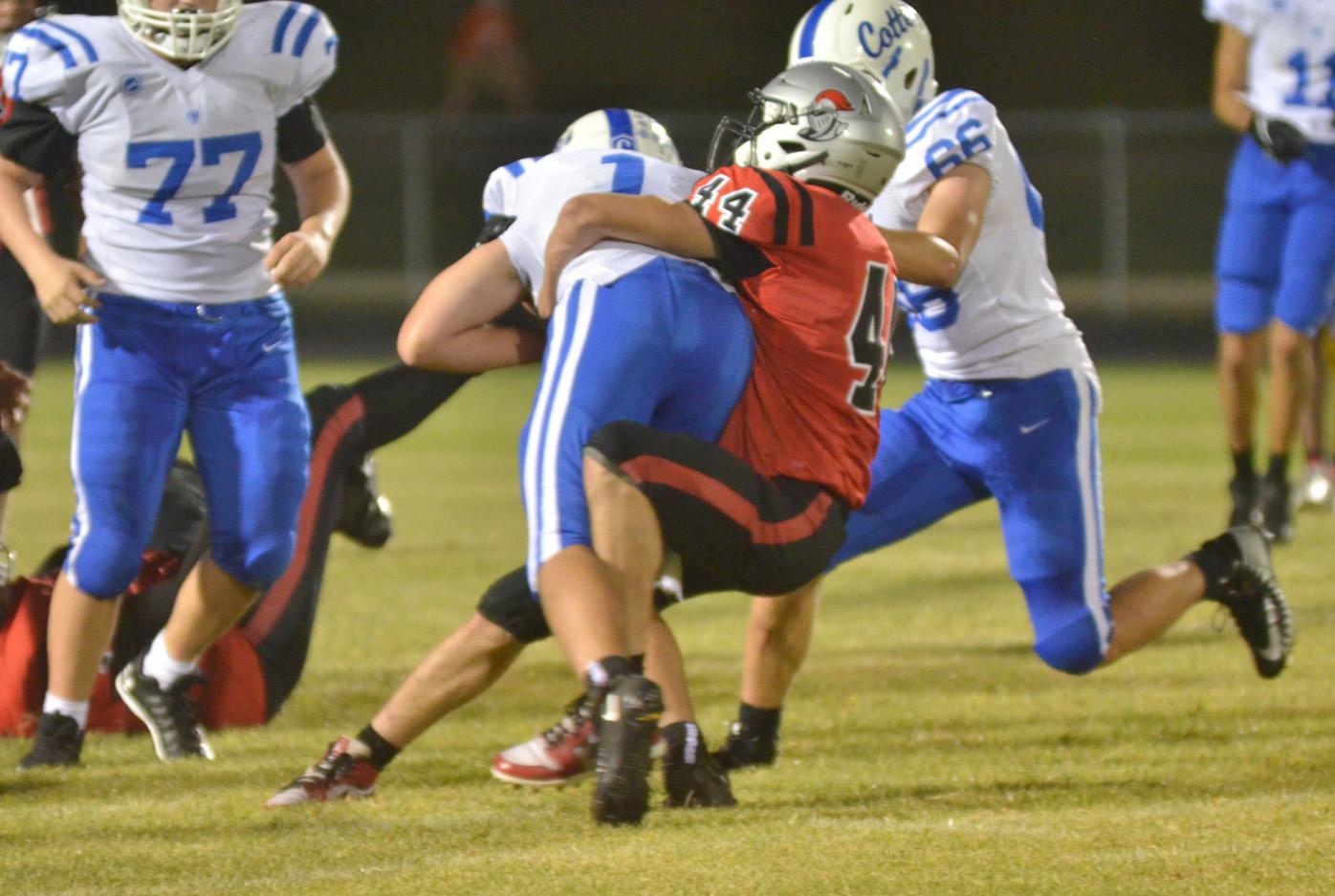 What better way to wash out a Week 1 defeat than with a 63-yard touchdown pass?

That’s how the Kenyon-Wanamingo football team started Friday night’s 24-14 victory against Winona Cotter in Kenyon. After forcing a turnover on downs from the Ramblers, the Knights picked up a first down with an 11-yard rush from senior running back Josh Schmidt.

Then, sophomore quarterback Will Van Epps dropped back and bombed a deep pass down the sideline to senior Trevor Steberg, who outran the defense on his way to the end zone.

That kicked off a night that showcased how much a team can improve in seven days.

“It felt great getting that win after a big loss like that,” Schmidt said. “We knew we could have won that first game, too. It was just bad plays after bad plays.”

K-W coach Jake Wieme added: “We talk about Week 1 to Week 2 and learning about ourselves. I think last week we learned we could run the ball, and we were still able to run the ball today, which made passing it a good option as well. Defensively and offensively I think our guys really stepped up.”

The Knights still rushed the ball 29 times for 233 yards, highlighted by Schmidt’s 20 carries for 110 yards and a touchdown. Evan Brossard also ran the ball six times for 32 yards, while it was Steberg’s 68-yard dash up the middle to put Kenyon-Wanamingo up 24-6 with 2 minutes, 19 seconds remaining that effectively put the game out of reach.

Senior Laden Nerison also caught two passes for 23 yards and a touchdown, in addition to a key 9-yard run on a fake punt to extend a drive that eventually resulted in a touchdown to push the Knights ahead 18-6 with 18 seconds remaining in the half.

“We threw the ball quite well today, too, knowing we have those guys on the outside,” Wieme said. It’s tough to find athletes like that and match up, especially when you have two of them on the same side.

“With the way Evan and Schmitty ran the ball today, too, it’s a nice combination of guys doing things. That’s what makes a good team, is multiple players.”

The defensive performance helped as well. Against a dangerous Winona Cotter running game, Kenyon-Wanamingo shifted to a 3-5 formation for Friday with only three down lineman and five linebackers.

“Coach (Randy Hockinson) made a good gameplan at the beginning of the week with that 3-5 defense and it worked out really well,” senior Kevin Vazquez said.

“It has Evan Brossard contain the running back, and that’s his main focus. That’s what the point of the 3-5 defense was.”

Because of that, Winona Cotter shifted heavily toward the air. While Tate Gilbertson completed 30 of 51 passes for 285 yards and both touchdowns, all that passing still produced only two scores. Six times, the Knights turned the Ramblers over on downs.

Moving forward, Wieme said he hopes his team can take another step forward this week with a tough game Friday night at Rushford-Peterson, which is 2-0 after last week’s 26-15 victory against Fillmore Central.

“It’ll be a pretty good game,” Vazquez said. “They’ll be difficult to beat, but we can get the job done.”