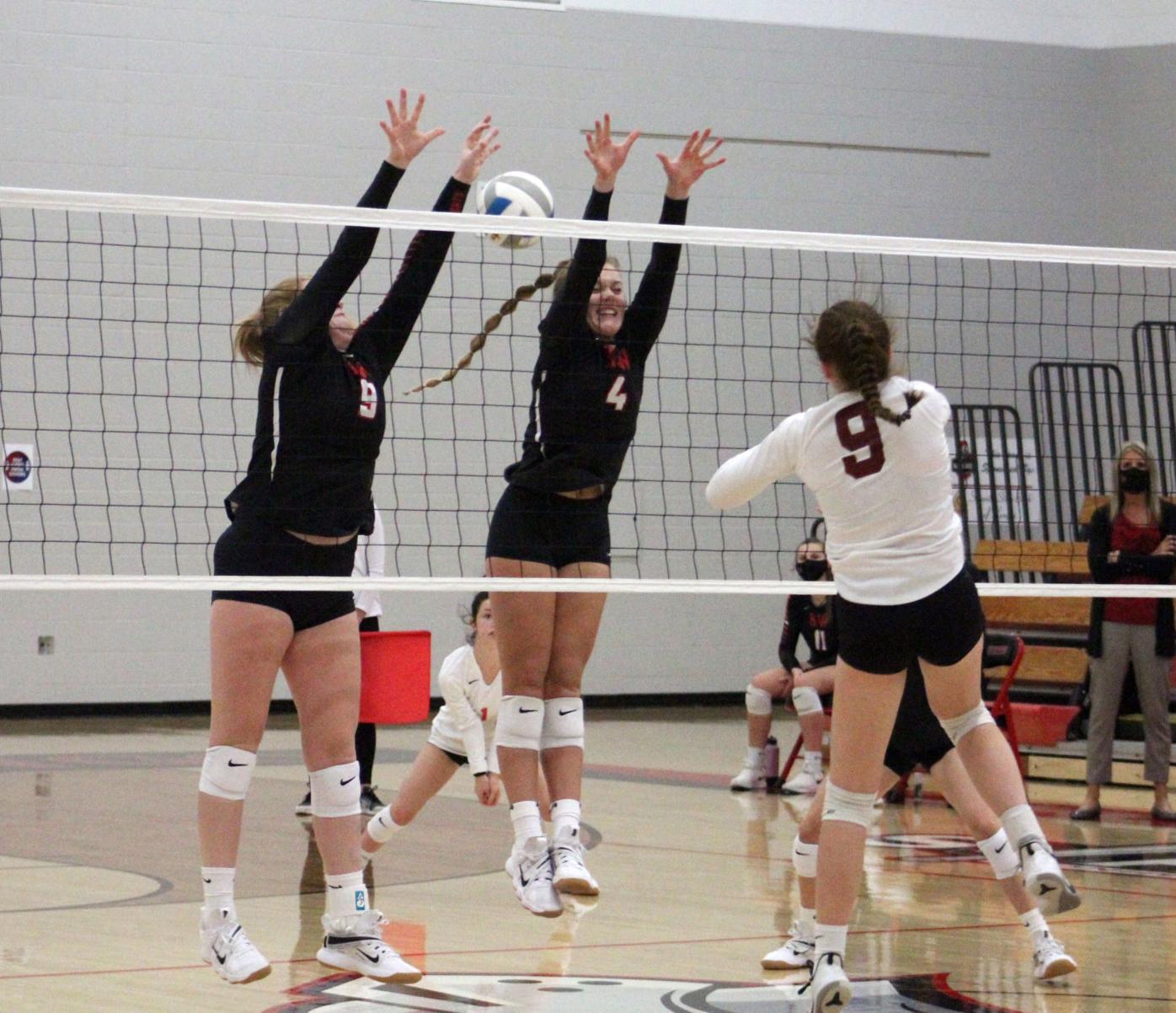 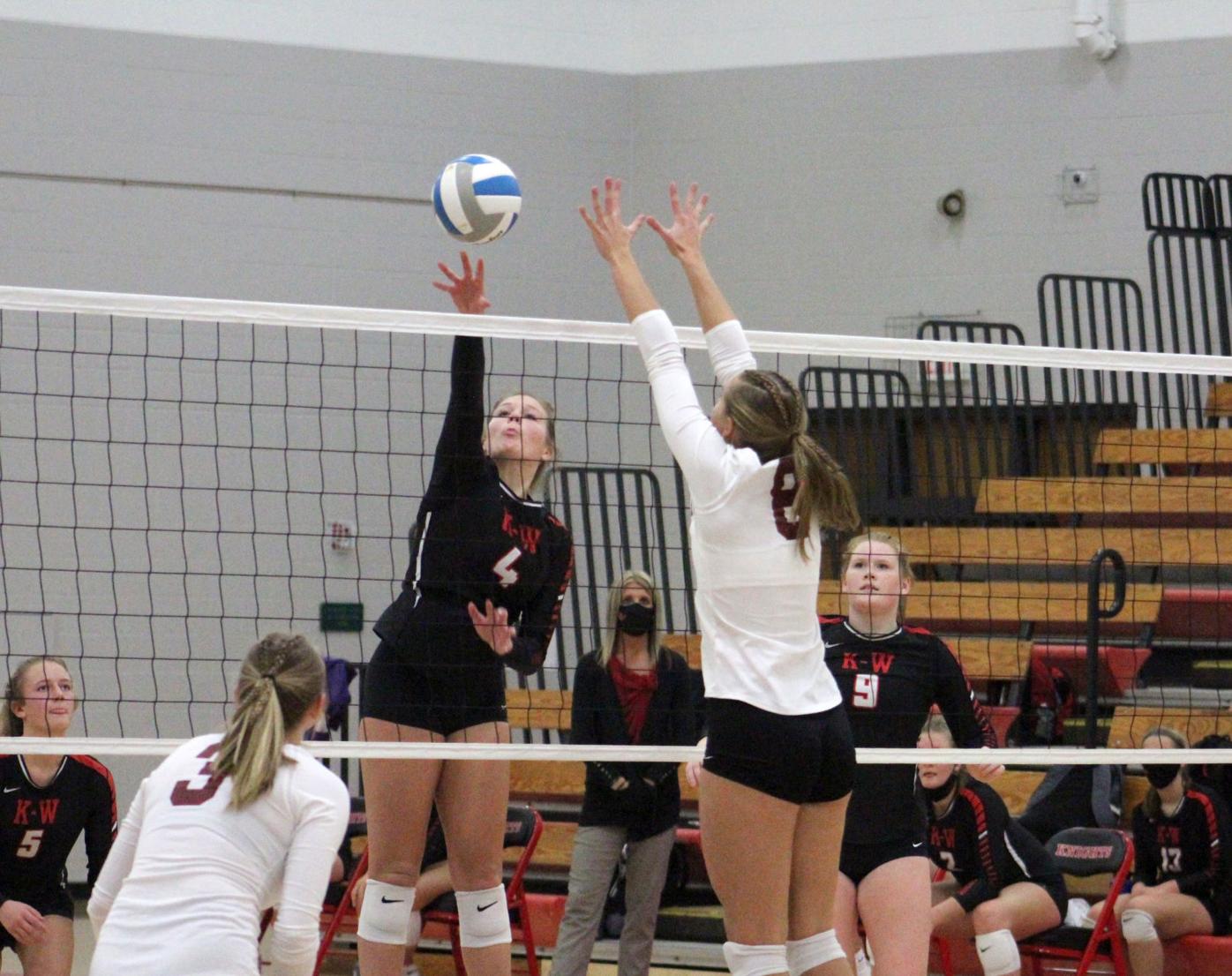 When it has the lead, the Kenyon-Wanamingo volleyball team can be a frustrating bunch to play against.

Facing Triton on Thursday night in Kenyon, the youthful Knights showed what they are capable of and then some. For the first two sets, the Knights capitalized on Cobra missed hits, but also rarely let up any easy shots. The combination of blocking and taking advantage of miscues resulted in a 25-10, 25-13, 25-16 sweep for the Knights.

In past years, that style of play was led by the aggressive attack and sound defense of Ally Peterson, Megan Mattson, Madi Luebke and Julianna Boyum. They have all graduated, leaving the Knights with just one senior: Hailey Lerfald, who was playing in only her third match of the season Thursday after missing the start of the year with an injury.

Four of the starting seven Thursday night were underclassmen, which doesn't seem to bother the somewhat rebuilding Knights (2-6) though. At least it didn’t show in the win over the Cobras (2-2).

“We're getting much better at being spot hitters,” said first-year Knights head coach Tracy Erlandson. “They do a nice job of finding the openings. As we get more confidence, I think our hitting will improve. Or maybe I want the team to be like this, where we frustrate other teams.”

The Knights also play in a tough conference. Powerhouse programs Stewartville and Kasson-Mantorville are both in the top five of Class AA. Goodhue, Lake City and Cannon Falls are bunched near the top of the Hiawatha Valley League standings as well.

Erlandson said confidence is the biggest key to her team's success. Although it may be hard to see progress on the wins column, from her perspective K-W is starting to tap into its potential.

As the regular season nears an end, the Knights continue to hone their skills on the court. Even in losses, the team has shown improvement, and despite those losses, Erlandson said the this season's gains will only benefit the team in the long run.

“I'm bringing a whole team back for a year. Then I have three or four sophomores on the court (at a time),” Erlandson said. “I'm very excited. We have our frustrating (moments), but tonight really showed what they can do.”

The Knights treated their parents to the best match of the season with the team's first sweep and second win.

It’s possible the Cobras, who last played on Oct. 19, were out of sync because of the time off and an overall inconsistent schedule. The way K-W played, however, it seemed as if there was nothing Triton could do. Even the smallest deficit — down 5-2 in the second set — didn’t affect the Knights; something Erlandson said the team has struggled with all year.

“When you're young and you get down, they don't really know how to get themselves back up,” she said. “That's what we've been working on and building confidence.”

After trailing 5-2 in the second set, the Knights took a timeout and regained their composure, before eventually exploding on a 9-2 to extend what was 9-7 lead to an 18-9 advantage. Perfectly summarizing the game was a sequence in which the Knights dug out a ball that then traveled over the net in a great position for a Cobra middle hitter to spike it back. That attempt was blocked, as were many others throughout the match.

“We work on getting our shoulders and bodies around in proper position,” Erlandson said. “I feel like we dominated that matchup tonight. Even if we blocked it and it tipped off fingertips, we were able to get something set up for us.”

The Knights had just three serving errors. Tessa Erlandson and Rachel Ryan each picked up two aces. Erlandson led the team with 14 kills. Stella Rechtzigel slammed seven kills and was a part of the block, leading the Knights with five blocks. Lerfald added six kills and three blocks, while Julia Dahl notched a team-high 13 digs and three blocks. Josi Quam guided the offense with 26 assists.

Kenyon-Wanamingo faces Lourdes in Rochester on Monday, Oct. 9, and is then back at home against Goodhue on Friday, Oct. 13.