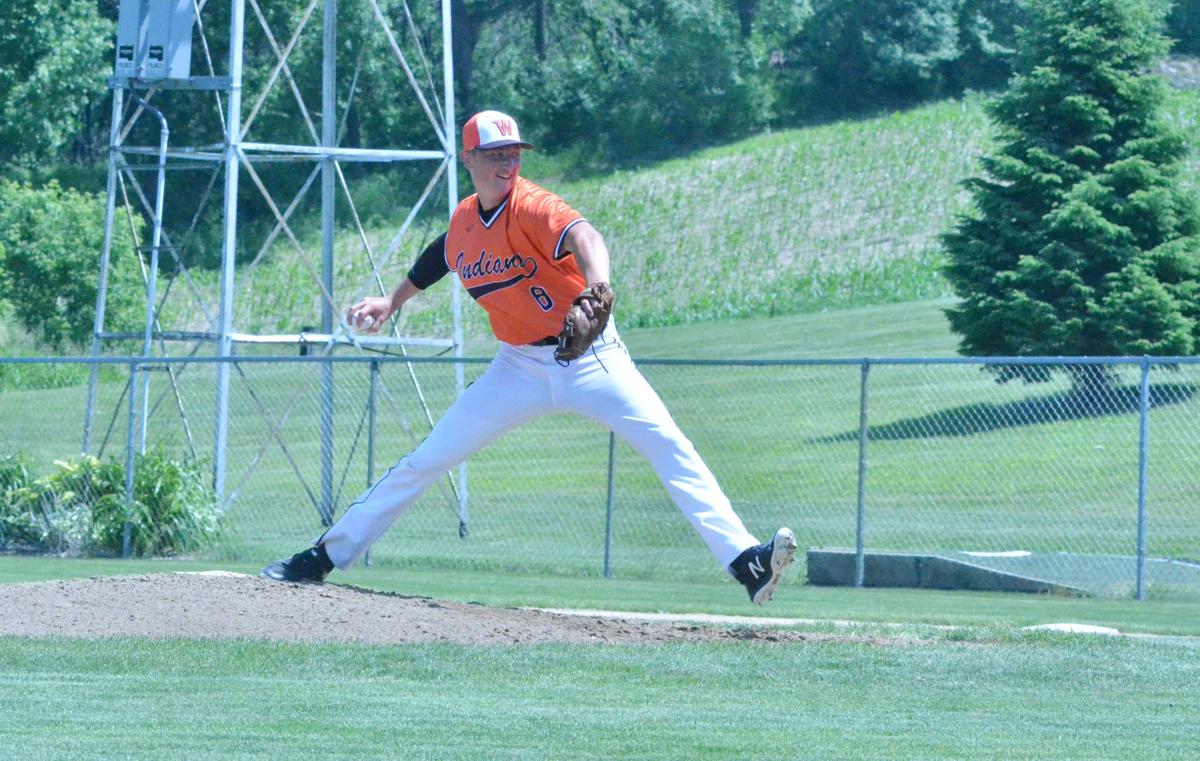 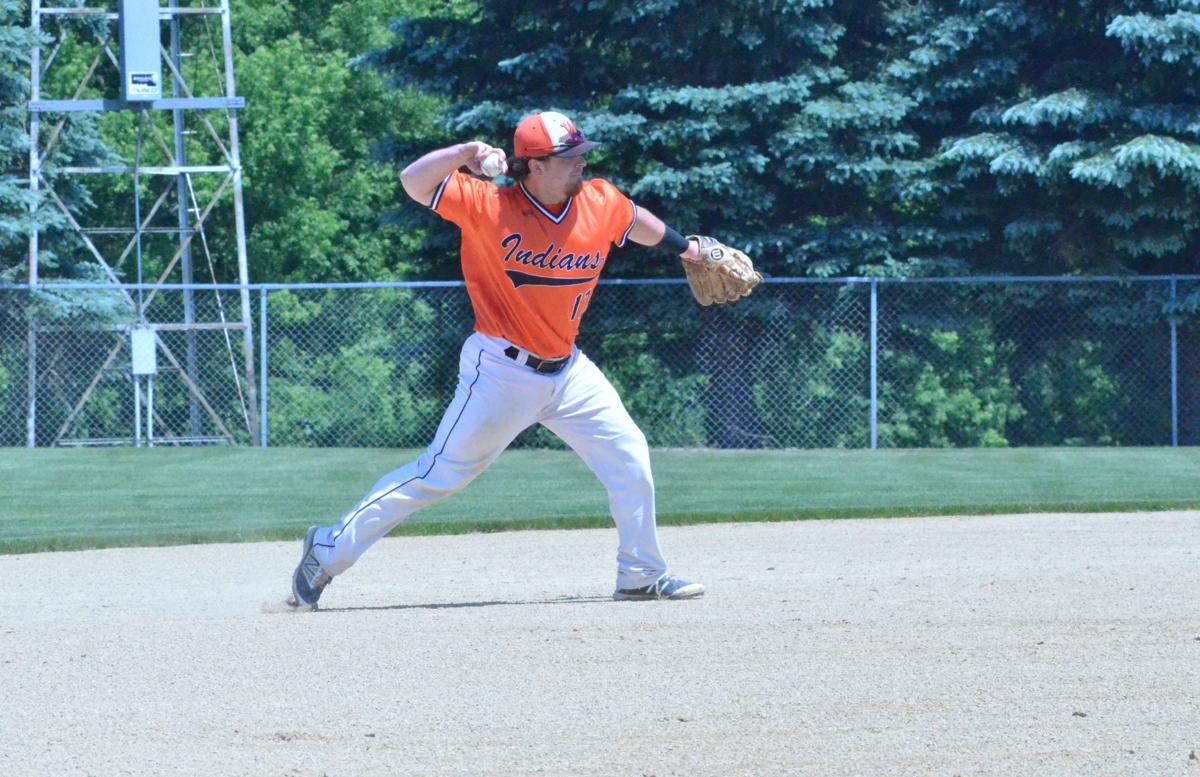 Waterville shortstop Ben Boran fires a throw over to first base. Boran doubled twice, drove in a pair of runs and scored once. 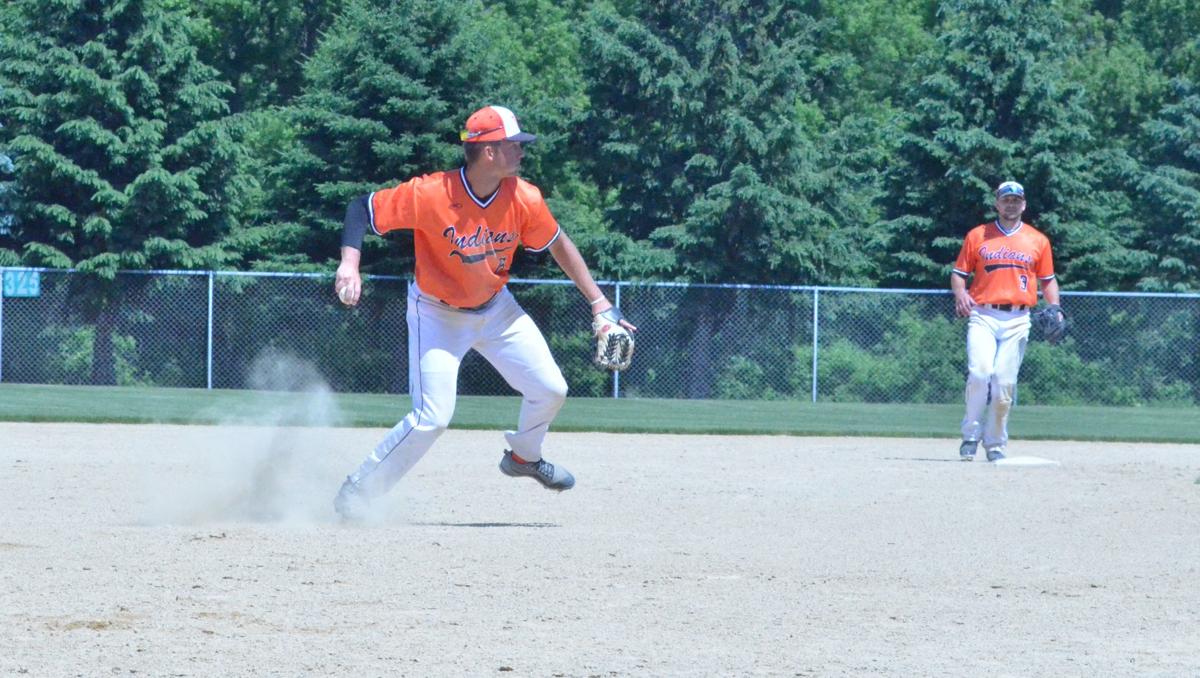 Waterville third baseman Dallas McBroom prepares to throw to first base after fielding a groundball during Sunday’s 7-4 exhibition win against the Wells Wildcats at William J. Grose Field in Waterville. 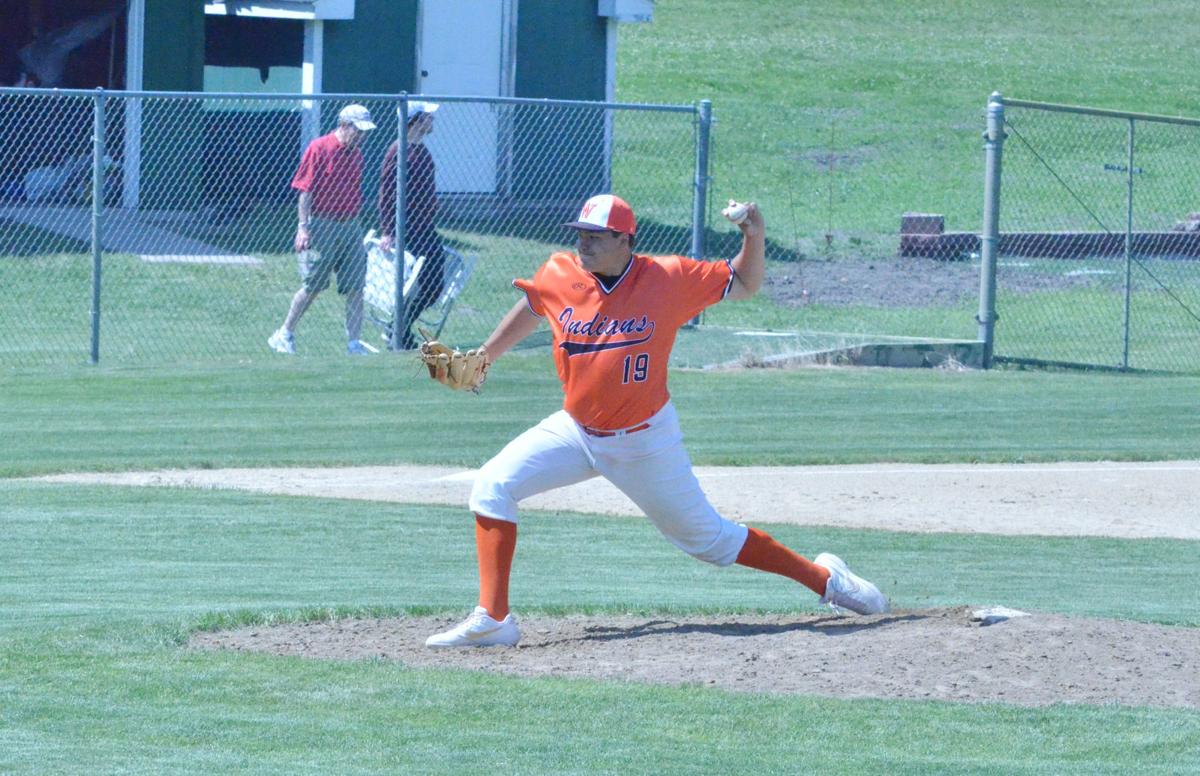 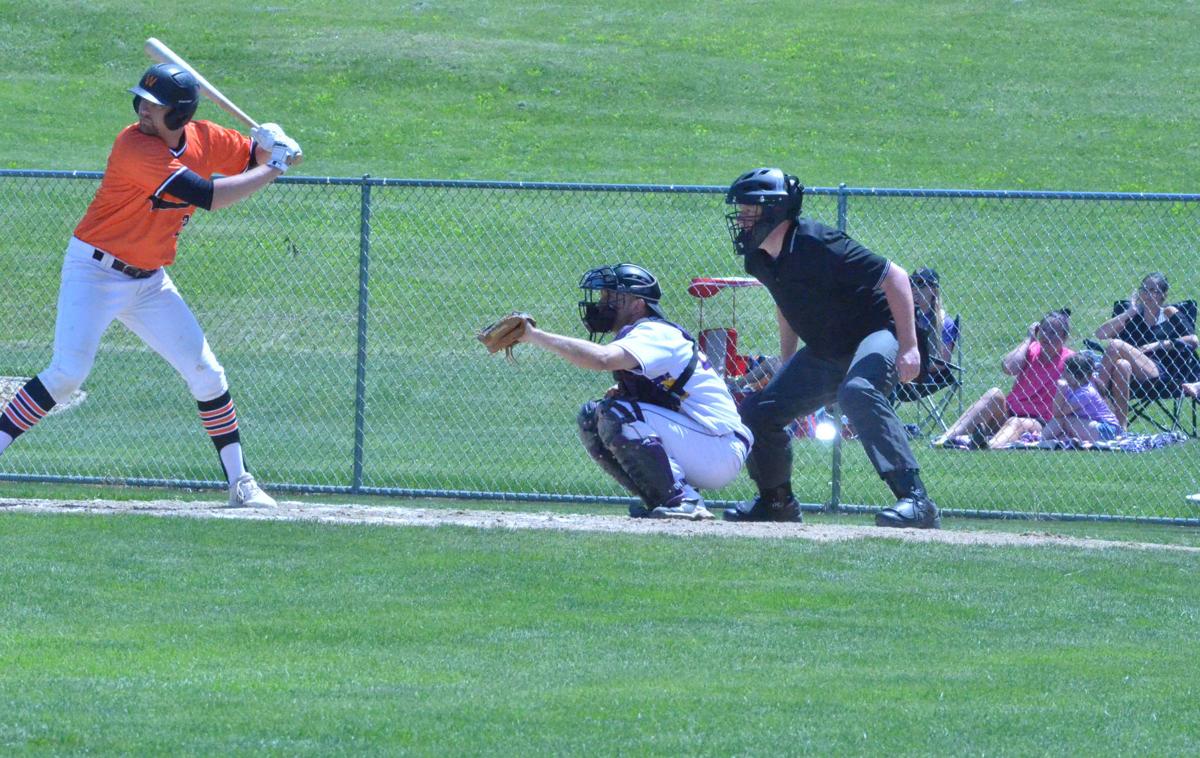 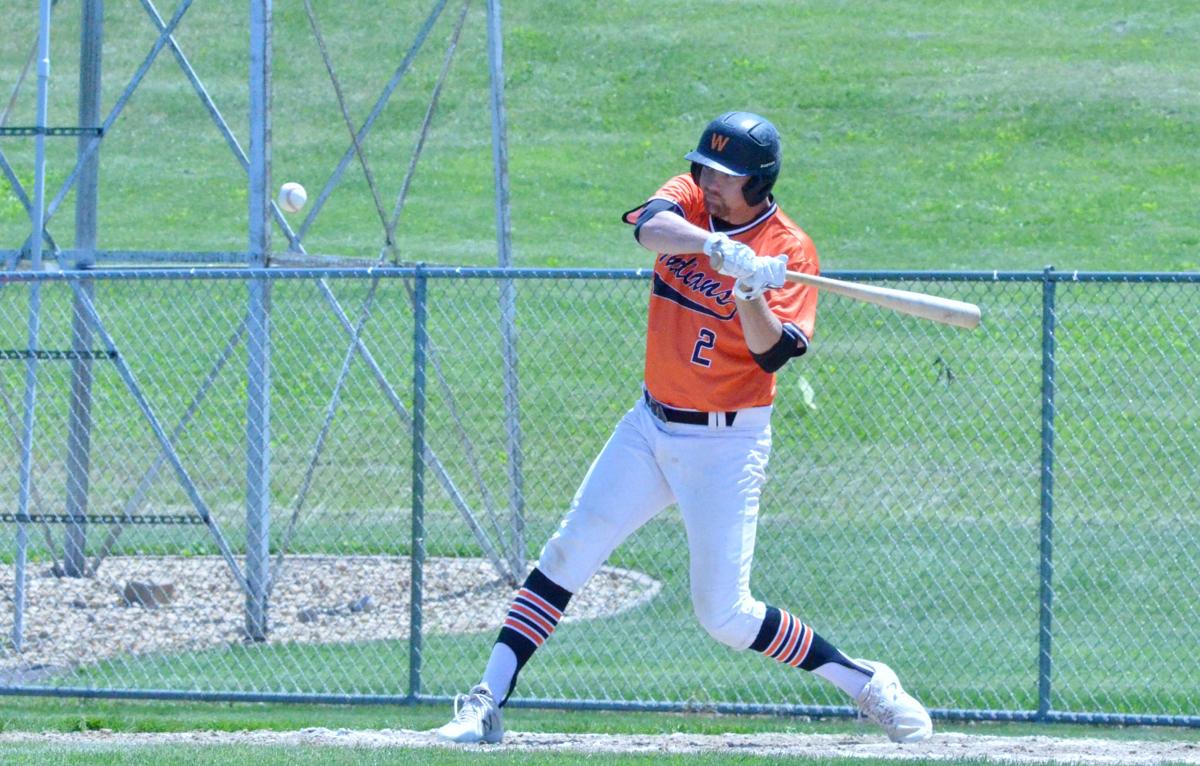 Waterville’s Nolan Grose swings at a pitch during Sunday’s 7-4 exhibition win against the Wells Wildcats at William J. Grose Field in Waterville. 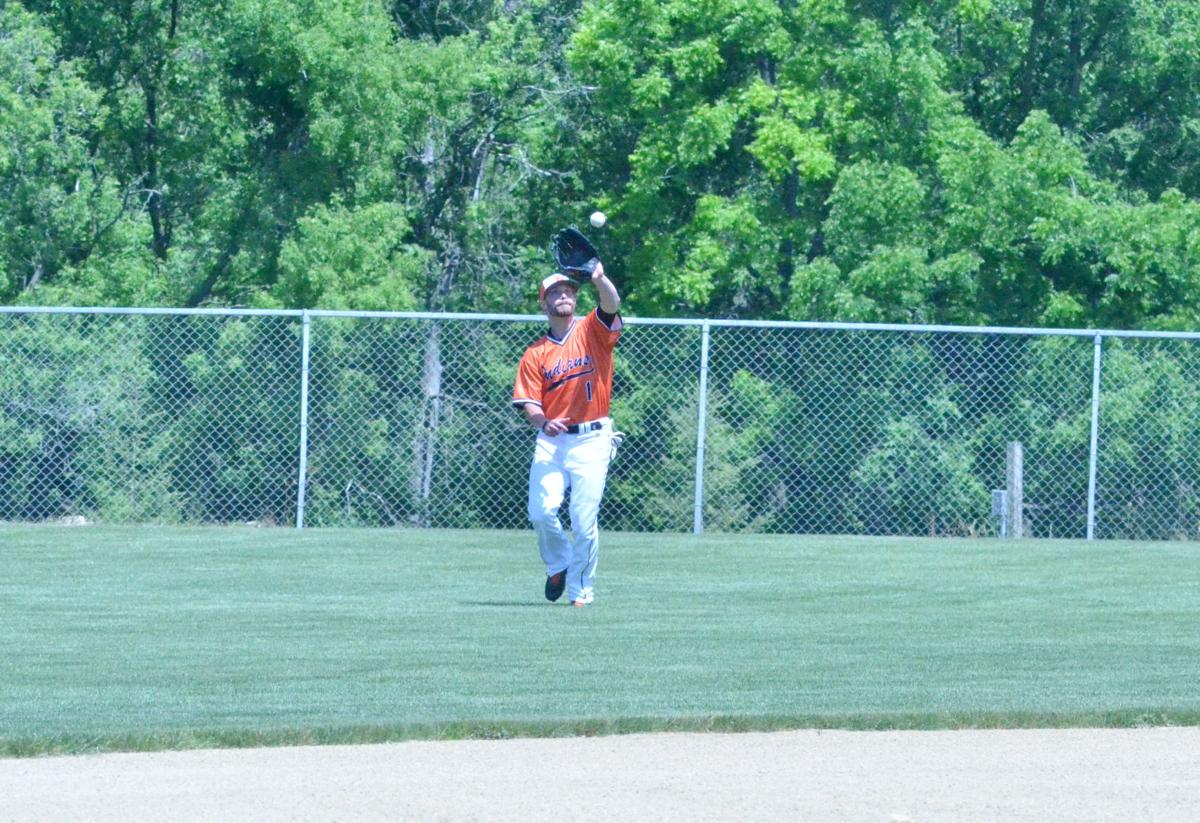 <&firstgraph>After back-to-back strikeouts to end the top of the third Sunday, Waterville Indians catcher Shane Sellner suggested that his younger brother, Luke, might be done pitching for the day.

<&firstgraph>As Luke was jogging back toward the dugout, he barked back he wasn’t ready to cede the pitcher’s mound. After Luke ended the top of the fourth with another strikeout, the same scene played out.

<&firstgraph>Finally, after dispatching the Wells Wildcats in order in the top of the fifth, Luke Sellner swapped positions with first baseman Dalton Grose, who along with Sam Stier handled the final four innings of a 7-4 Waterville win in an exhibition against Wells.

<&firstgraph>It was the first game of the season, even if it was unofficial, after the Minnesota Baseball Association elected to allow its member teams to start playing exhibitions as long as there is legal access to a field. Waterville owns and operates William J. Grose Field, so the Indians quickly set up a game with the Wildcats in the one of the state’s first baseball games this summer.

<&firstgraph>“In the last month or two, we started meeting down here with just a few guys at a time,” Luke Sellner said. “I was just throwing a couple side bullpens, but nothing more than 35 or 40 pitches, so today was a pretty big test for me. I didn’t expect to go that long, but we just played it out and my arm was feeling fine so we just kept going.”

<&firstgraph>After a shaky first inning, in which Wells loaded the bases but did not score against Luke Sellner, the right-hander settled in to allow only three baserunners in his final four innings. He retired the final eight batters he faced, and finished his five shutout innings with seven strikeouts against two singles and four walks.

<&firstgraph>Through the last month, Sellner said he and a few teammates have gathered at William J. Grose Field for loosely-structured practices and for him to throw bullpen sessions that didn’t exceed 40 or so pitches. Sunday, he fired an estimated 86 pitches.

<&firstgraph>“Today was a pretty big test for me,” Sellner said. “I didn’t expect to go that long, but we just played it out and my arm was feeling fine so we just kept going.”

<&firstgraph>Sellner also launched a two-run homer in the bottom of the third into the trees beyond the left-field fence.

<&firstgraph>“That felt good,” Sellner said. “I was just hoping to get my first hit today, and I ended up hitting that one pretty well. I got it up in this wind a little bit, I figured that’s all I needed to do and it just kept carrying.”

<&firstgraph>Waterville snagged a 1-0 lead in the bottom of the second when centerfielder Ty Kaus slapped an RBI single into center to score Dalton Grose. After Sellner’s two-run homer stretched the lead to 3-0, Waterville tacked on four additional runs in the bottom of the fifth with two-out RBI doubles from Kaus, Stier and shortstop Ben Boran.

<&firstgraph>As Waterville’s exhibition schedule stretches on for an undetermined amount of time, the Indians will mix and match a desire to win with allowing as many of their players to partake in the festivities.

<&firstgraph>“We’re trying to get everyone involved in the games,” Sellner said. “We’re still playing league opponents, but they’re not technically going against our league record or anything. This first one was fun just to get our feet wet. As we go, we’ll probably get more guys involved.”

<&firstgraph>While Waterville’s next game might not officially count for anything, it certainly means something. The Jordan Brewers, last year’s Class C state champions and this year’s top-ranked team in the preseason poll, is scheduled to visit William J. Grose Field on Friday night.

<&firstgraph>“Next Friday’s a big one, put this in there,” Sellner said while pointing at the reporter’s voice recorder. “Jordan, they won state last year and I think we’re preseason ranked fifth in the state and they’re one, so it should be a good one.”

The Jacks have also not announced they will be traveling to play at other fields that have been approved to host games.

Regionally, the Faribault Lakers will travel Thursday night to play at the Lonsdale Aces, while the Waterville Indians will host the Jordan Brewers on Friday night. The Morristown Morries have been approved to host games by the MBA, but have not announced any upcoming contests as of publication.