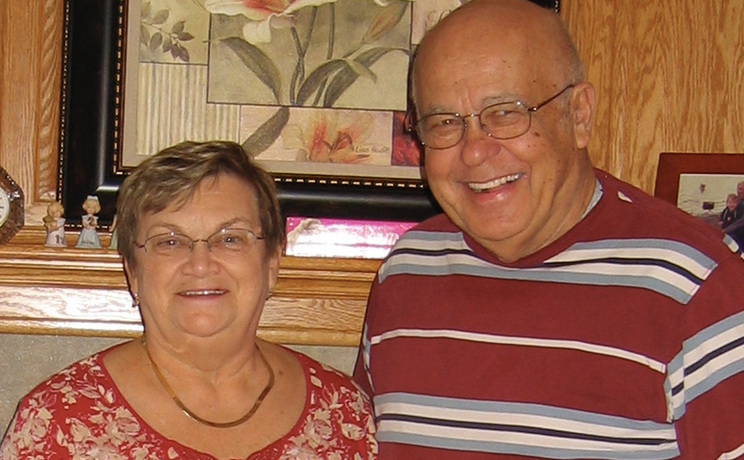 Leonard and Madelon Payne Lakeville—Leonard and Madelon (nee Grothe) Payne's Memorial Service will be July 10th, 2020 at Peterson Chapel at 11:00am. Leonard's body was bequeathed to Mayo Foundation after he passed peacefully on September 22nd, 2016 at the age of 77. Madelon passed February 1st, 2020 at the age of 79 peacefully. Both passed after visits from adult children (including spouses), grandkids (including spouses), and great grandkids. Leonard and Madelon were married May 11, 1963 at Dale Church, Kenyon, MN. They lived in an apartment shortly before moving to Beatrice Street in Saint Paul for about 5 years. They later moved to St. Peter, MN for about 5 years and then took off to Essex Junction, Vermont for less than a year. They moved back Minnesota and stayed in Le Center for a couple years, finally ending up in Chaska, MN in 1976! Leonard was born April 28th, 1939 to Leonard and Thelma (nee Utz) Stapf and later adopted with all siblings by Donald and Gladys (nee Hacker) in 1947 at the age of 8. Leonard, along with his siblings, grew up working on the family farm until he graduated high school in Buffalo, MN. After high school, Leonard served in the Marine reserves. Then, Leonard started his career in the sporting goods industry as a Sales/Customer Service Representative for Larson Industries (hockey sticks, pool tables, etc.). He later worked for Northland Hockey Stick Company before joining Jerry Webb at Midwest Sports Marketing where he would make many longtime personal connections. Leonard's career moved the family every few years, and in 1976 they finally settled in Chaska on Lake Bavaria. After retiring from Midwest Sports, Leonard continued sales working at Sears in Eden Prairie, MN for a few years and as a school bus driver before fully retiring. Madelon was born Jun 1st, 1940 to Obert and Gena (nee Olson) Grothe in Wanamingo, MN. Madelon grew up with 3 siblings on the family farm in Wanamingo and took on many chores after her mother passed at a young age. Madelon spent her free time at the neighboring farm owned by her uncle Ray and Bernice (Bunny), spending a lot of time with her cousin Marilyn. Madelon attended and completed High School in Wanamingo, then worked as an office administrator at ADM for a few years before getting married to Leonard in 1963, kicking off her career as a housewife. Madelon had the tough task of keeping the house in order and raising their three kids (Todd, Lisa, and Steve), each born one year apart, and eventually Linda, born 6 years after Steve, who kept Madelon company after the older kids left home. Madelon started working outside the home in 1986 at Westin manufacturing making water ski binding for several years, later joining her eldest son Todd working at Cooper's Foods in Chaska until she retired. Leonard and Madelon committed every available moment of their spare time to raising kids and helping with the grand kids, always encouraging them to be involved in sports and community activities while attending as many as possible. Leonard and Madelon took great pride in all their grandkids and step-grandkids, always ready to watch the grandkids at the drop of hat. Leonard and Madelon always had room for relatives visiting from out of town. Leonard and Madelon took pride in organizing and holding family events in Chaska at their Lake Bavaria home, having the boat and fishing poles ready with no shortage of food! Leonard and Madelon is preceded in death by their parents. Left to cherish their memory, are their loving family: sons and daughters-in-law: Todd and Robin Payne of Chaska, MN; Steve Payne and MaryAnn Lavery of Plainfield, IL; daughters and son-in-law's: Lisa and John Robinson of Winter Garden, FL; Linda and Bob McCune of Lakeville, MN; Grandchildren: Lindsey Cardwell and husband Alan; Jerad Payne and wife Jenny; Andy Kurvers and wife Mollie; Amanda Kalkes; Emily Payne; Alexis Robinson; Brenden Payne; Ryan Payne; Michael McCune; Kayla McCune and great grandchildren: Jacob, Hannah, James, Elias, Kathryn, Mila, Barrett. Brothers, Brother In Laws, Sisters, Sisters in Laws: Sandra Grothe; Karen and Larry Freihiet, Jerry and Judy Grothe, Roger and Heidi Payne, Ed and Sharon Payne, and Shirley and Larry Kreyling; nieces, nephews and other relatives and many friends. Memorial may be made to Alzheimer's foundation! Serving the family is The Peterson Chapel in Buffalo. 763-682-1363. www.thepetersonchapel.com