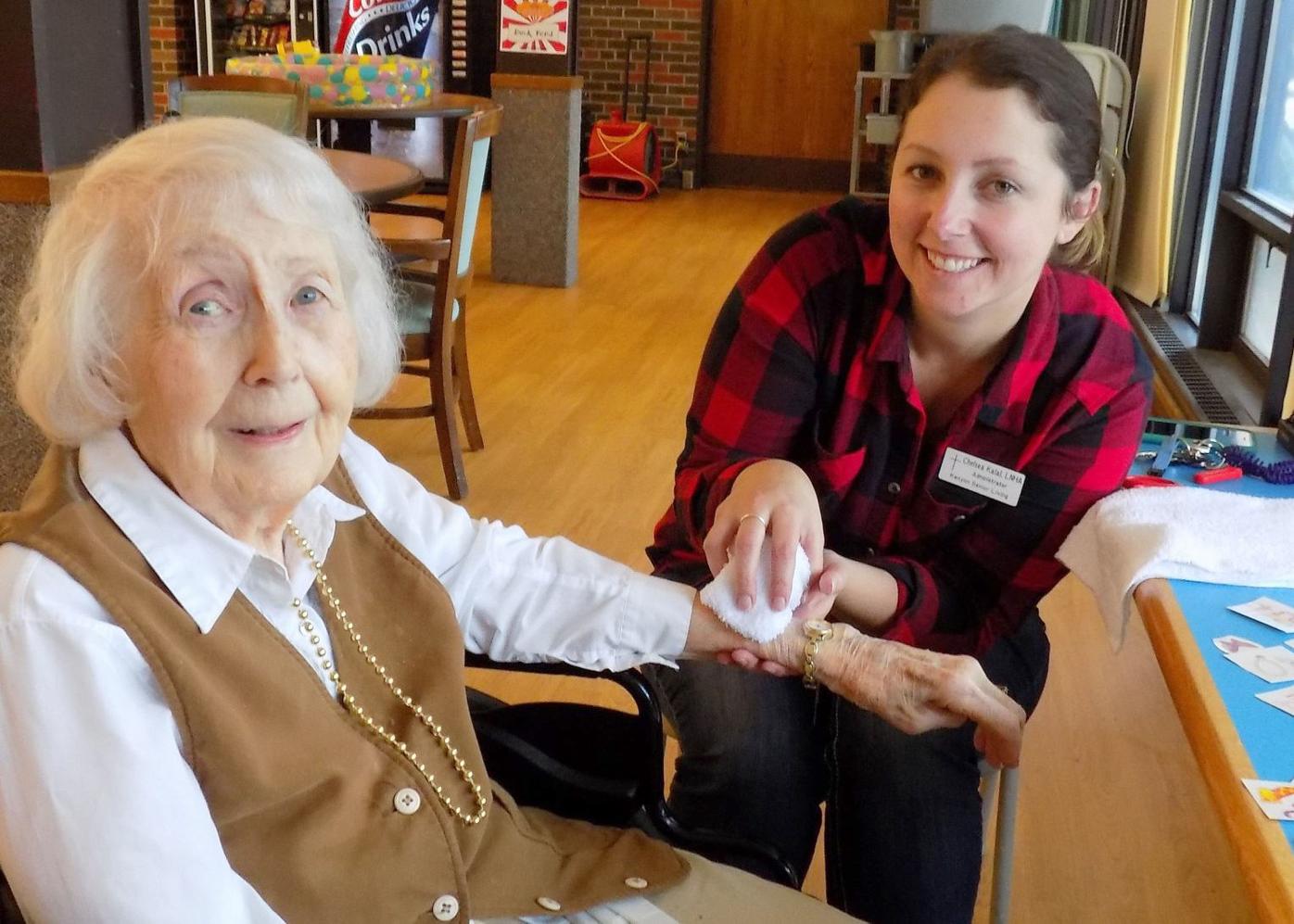 Chelsea Kalal has been employed at Kenyon Senior Living for nearly 10 years. Throughout those years, she’s not only developed deep relationships with coworkers, she’s also created friendships with residents. (Photo courtesy of Chelsea Kalal) 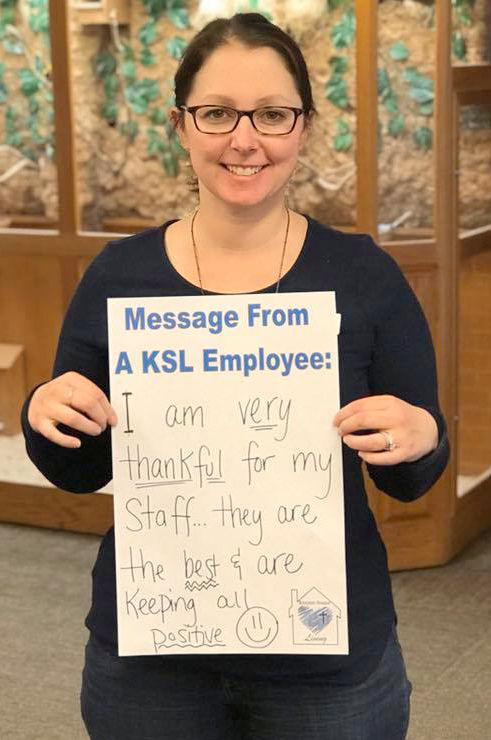 The pandemic has created some challenges for everyone in some way, shape or form. In the healthcare industry, there have been even more hoops for employees to jump through. At Kenyon Senior Living, staff posted photos of staff and residents with an answer to a question on KSL’s Facebook page to stay connected with others. Pictured is Chelsea Kalal and her message about KSL staff. (Photo courtesy of Chelsea Kalal) 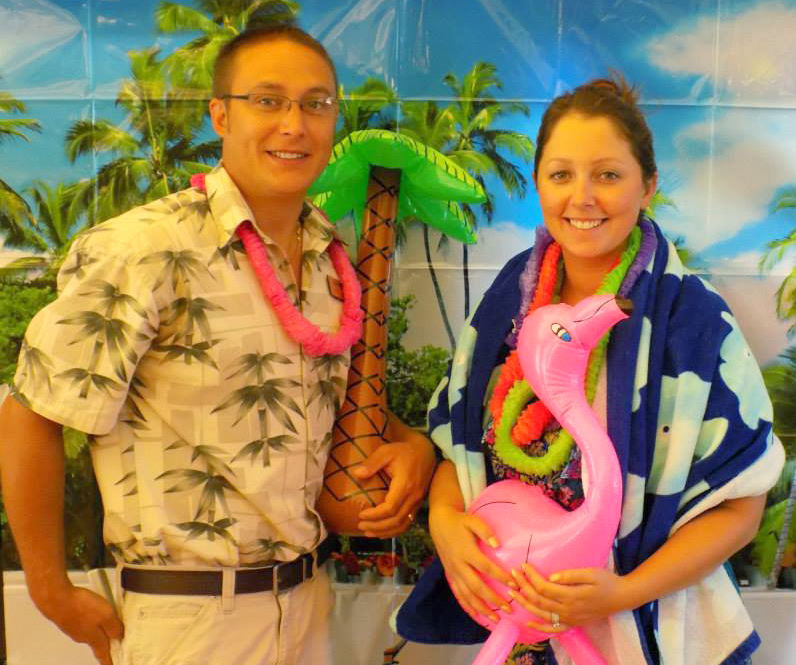 Chelsea Kalal has been employed at Kenyon Senior Living for nearly 10 years. Throughout those years, she’s not only developed deep relationships with coworkers, she’s also created friendships with residents. (Photo courtesy of Chelsea Kalal)

The pandemic has created some challenges for everyone in some way, shape or form. In the healthcare industry, there have been even more hoops for employees to jump through. At Kenyon Senior Living, staff posted photos of staff and residents with an answer to a question on KSL’s Facebook page to stay connected with others. Pictured is Chelsea Kalal and her message about KSL staff. (Photo courtesy of Chelsea Kalal)

Whether you’ve “never not known” Chelsea Kalal, or gotten to know her over a span of 10 years, her caring, compassionate personality is just one of the many qualities that stand out to those who have become acquainted with the Kenyon native.

After nearly 10 years working at Kenyon Senior Living, Kalal, who filled the roles as campus administrator and director of development, will officially end her tenure at KSL on Sept. 23. She will move onto a position that will not only bring her closer to her home and family, but also will allow her to continue to grow in her long-term care career.

Emily Quam, KSL’s Campus Admissions Director, Licensed Social Worker, will be the interim “designated person in charge” following Kalal’s exit. The Kenyon Senior Living Board of Directors has contracted with Tom Nielsen, a Licensed Nursing Home Administrator from Northfield Retirement Community. Kalal said Nielsen has worked with the facility in the past, most recently covering her maternity leave in 2018-19.

Although Quam, one of Kalal’s coworkers, is saddened by the news of Kalal’s departure, she is excited for her and the next steps in her career.

“I am very honored to have worked with Chelsea for nearly 10 years,” said Quam. “The compassion and care that she brings is beyond compare.”

Quam says Kalal has always been there for not only her, but also other staff, when they have an issue, even if it isn’t work-related. In her opinion, Kalal has never treated KSL as simply a job, it has been part of her home and her family. Even on her wedding day, Quam says she was busy checking her work emails and checking on the residents.

“She doesn’t like being called a boss, but I have always told her that the title fits her as it stands for Best Office Support System,” added Quam.

Kalal’s extensive knowledge about senior living health care is also something Quam noted, especially how she has always kept up-to-date on the continuous changes in the regulations, which she says is an entire job in itself.

The last six months, Kalal admits have been super challenging, especially in an industry that’s always changing. One thing she’s learned throughout the process is to be patient, and take it day after day, because there’s no definite answer on what’s coming the next day.

“The biggest thing is, I’m obviously going to miss my coworkers, as I’ve been with most of them my entire career there,” said Kalal. “I’ll also miss the residents, not only their stories, but also their input on life. Since I’ve been there, I’ve moved, I got engaged, was married and had two kids. I’ve had a lot of major experiences with them there. It will be weird not seeing them on a day-today basis and not having those experiences.”

Developing a passion for healthcare

Since she began her career at KSL in October 2010, Kalal says she has truly enjoyed and appreciated her time working in her hometown and caring for the area’s seniors. Although healthcare wasn’t something she had envisioned for herself, it is something she now has a passion for.

“I have been honored to care for my residents, some I have even known my entire life,” said Kalal in an email to members of the Kenyon Area Business Association. “These people will forever hold a special place in my heart — truly. This position has allowed me to grow and learn more than I thought imaginable. I have developed and acquired great skills which will be invaluable in my future.”

After KSL’s campus administrator stepped down, the KSL Board began searching for new admin and Judy Pavek, KSL Board of Directors Secretary suggested board members talk to Kalal, who was the director of development at the time.

“I have never not known her,” said Pavek of her relationship with Kalal. “She’s a very compassionate, caring person and she’s very organized.”

Kalal, who is best friends with Pavek’s granddaughter, was always the organizer of the events in her friend group. Pavek says she noted her strength with organization back then, years before she was employed at KSL. Kalal also played a big role in creating fundraising opportunities with the KSL Gala and the Golf Tournament to acquire needed funds for remodels and additions of the facility.

“It was a win-win-win situation for all, it really was. It’s been a really good experience,” added Pavek.

Kalal stepped into the acting role as campus admin in October 2013 and took the necessary classes to become a licensed administrator in March 2014.

The campus admin position involves handling the overall day-day-day operations, making sure management staff is doing what they need to do and managing their staff so everybody is doing the job the best they can with an overall goal to provide quality care.

Through her time in the admin role and director of development at KSL, Pavek said she believes that the people are very appreciative Kalal interacts with the residents.

“They all know who she is, instead of staying in her office, something that was important,” said Pavek. “She wears many hats in a small facility.”

Connecting with the community

Throughout the community, Kalal has also made various connections through serving as a member of KABA, where she acted as secretary and most recently as vice president.

Peggy Ryland, owner of Write-On with Don Ryland, and member of KABA, said when they relocated their business to Kenyon about 10 years ago, they did not know much about the community. As customers would come in, Ryland says they would try to get to know them a little bit and one of those customers was Kalal.

“She was so welcoming, very personable and the fact she knew the community so well made a huge difference,” said Ryland of getting to know Kalal through planning the KSL Gala and in KABA.

When KABA first started, Ryland said they were approached and asked if they’d be interested in being involved in the business organization. As KABA sponsors many events in the area, Ryland says Kalal has taken on chairman of the committee for the Easter Egg Hunt each year, despite how busy she already was.

“That’s just another thing she has committed to,” said Ryland of her time planning the hunt. “Even after she got married and had kids, she still found time. A person that steps up and commits and says yes, she just always had a connection to the community.”

That connection to the community is something Ryland found vital, as it made planning events easier. Given how much she helped, not only at her job, but also with the community for KABA, Ryland says she will be dearly missed.

“It’s going to leave a void, she’s been an important part in a lot of places in the community,” said Ryland. “She’s going to be missed and I wish her all the best. I’ve really enjoyed getting to know her.”