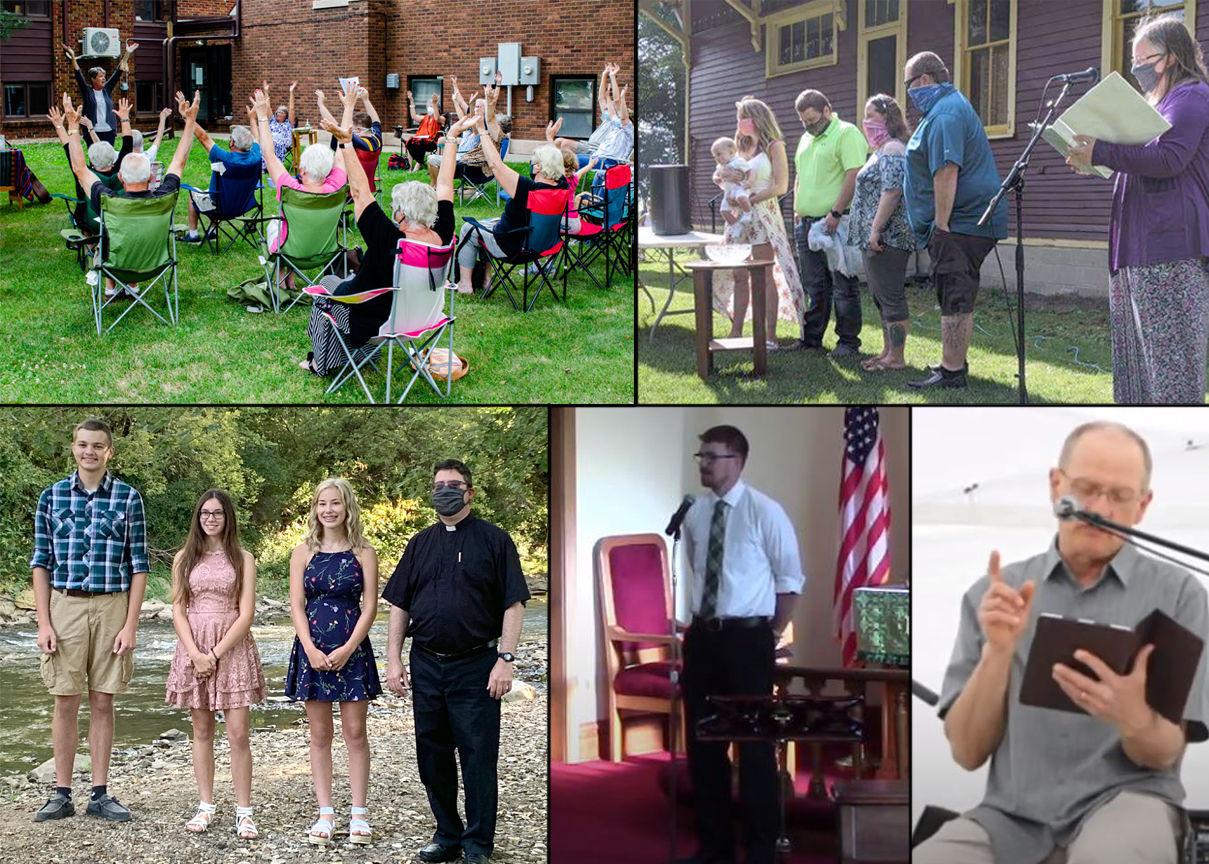 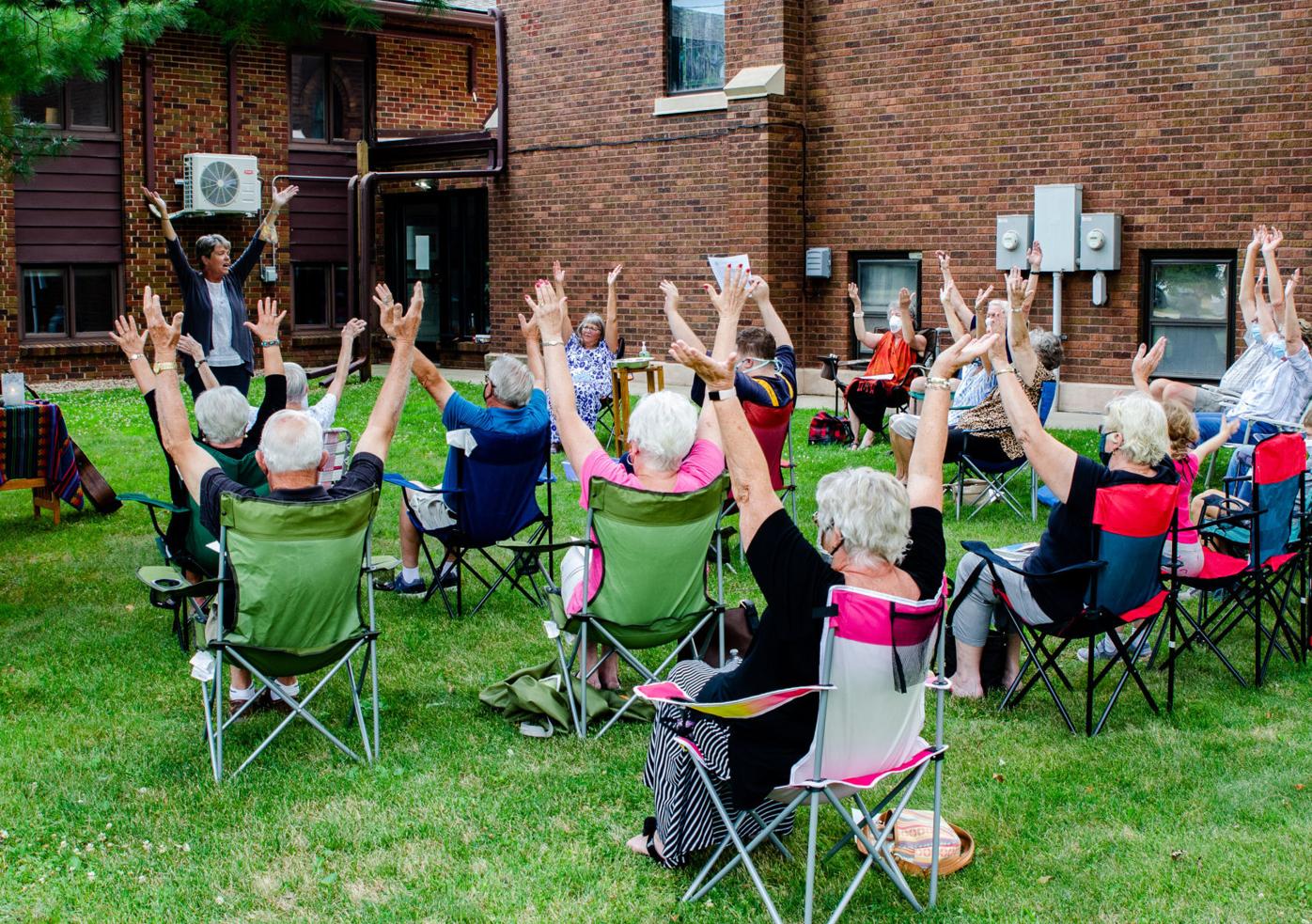 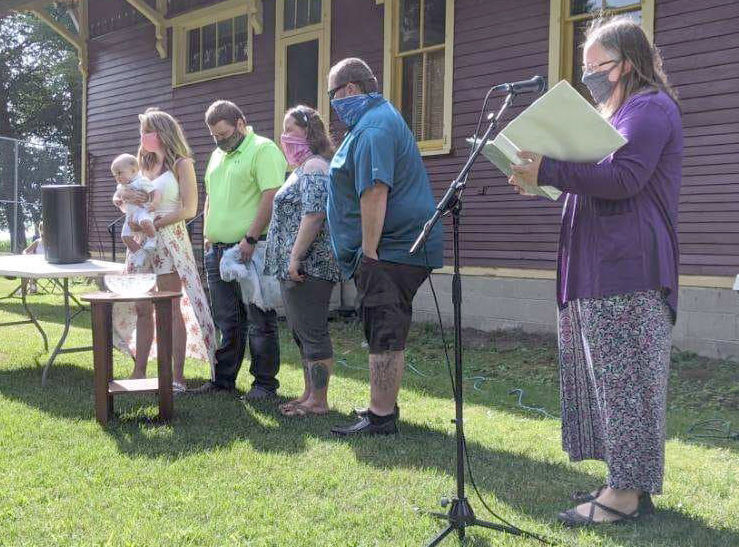 Holden and Dale Lutheran Church adapt to the guidelines by holding a baptism outdoors for one family and their child. (Photo courtesy of Heather Culuris)

Holden and Dale Lutheran Church adapt to the guidelines by holding a baptism outdoors for one family and their child. (Photo courtesy of Heather Culuris)

Following the Stay-At-Home orders put info effect March 27, many businesses/service providers, including places of worship, were left scrambling to figure out how to provide services amid the restrictions.

Locally, places of worship have adapted to the ever-changing times, in hopes to stay connected with their congregations through hosting outdoor services, recording sermons and abbreviated services, using social media as a creative tool and posting services online via YouTube.

Heather Culuris, pastor of both Holden Lutheran and Dale Lutheran churches in Kenyon, is grateful for the help of many people, from council leaders in planning and writing safety plans, to musicians who share their talents and also to those who set up the sound systems.

“We are trying to be creative and faithful, and safe all together,” he said.

From March to June, Culuris says the church’s services were recorded online and posted on YouTube. While they found that some folks don’t have easy access to online worship, they were also surprised to find those tuning in included local nursing homes, a few elderly members who haven’t been able to come to worship for years, and those in the community who work on and cannot always attend in-person.

In June, Culuris says the churches made the move to in-person worship at Holden Park, enjoying both the windy and the “beautiful” days. The outdoor services have included been four different baptisms, where all were required to wear a mask and parents poured the water. Music has been provided by a soloist, including some college students who were home for the summer, which Culuris said has been a highlight of the service.

In August, Holden and Dale began in-person worship inside both churches, and have been rotating between Holden and Dale each week, while following safety plans including wearing masks and making plans for air and traffic flow. In September, the parishes will be back to having services at each church like they do every fall.

Something to be thankful for

Pastor Gideon Johnson, of Hauge Lutheran Church in Kenyon and Emmanuel Lutheran Church in Aspelund, agrees that a lot of new things have had to be learned over the last several months, with social media a big part of the puzzle, as they are providing in-person services, as well as posting the recordings of one service online for anyone to view.

“The main things we’ve been learning are trying to connect with people in a not-normal-way, and putting content online and doing it well, part of the challenges and benefits of learning new ways of ministry in this time.”

Julie Rogness of First Evangelical Lutheran Church says they have been “really lucky” to have one member of the church, Jim, who generously and willingly gave his time to record services once a week to post online. That led to others getting involved through sharing gifts of music or serving as assisting ministers during the recordings and helping with the presentation of liturgy and lesson reading. Rogness says she has learned several things, such as keeping the service short, instead of one hour long as in the past.

Like Culuris, Rogness, too, has noticed a bigger audience tuning in online than the church would’ve had all summer long if the building was open, helping the church decide to continue posting services on both the church’s website and Facebook page, even when the church is open for in-person services since there’s a wide variety of reasons some may not be comfortable coming inside the building, like claustrophobia or anxiety.

Rogness has also realized that it made a difference to take the time to thank the congregation for their generosity not only toward Kenyon, but also on the state, nation and global levels, during the traditional offertory. Rogness says that is something everyone should always be thankful for.

Each Wednesday evening, Rogness says First Lutheran offers an outdoor service for those interested in gathering for worship.

“I can just see in their demeanor, it’s so good to be together, despite masks and the social distance. It’s good for our souls,” said Rogness of the outdoor services.

At Trinity Lutheran in Wanamingo and Wanamingo Lutheran Church, Pastor Chris Culuris says services have been at River Park every other week since June. Members of the congregation can sit outside or in their vehicle with the service broadcast live on the radio. Before being allowed to resume in-person services at 25% capacity, he says the services were strictly posted on a newly created YouTube channel.

During the Stay-At-Home orders from mid-March to the end of May, he was able to get some local musicians to record sound files to include in the services, and he and his wife, Heather, came up with some “famous” Lutheran trivia, along with Bible trivia for viewers to challenge themselves with. Since the services posted online didn’t have any music due to restrictions with singing, once able to resume in-person services in the city park, Chris Culuris said it was a “blessing” to have music back with a soloist singing on behalf of the congregation.

“Being able to hear music again is a real blessing,” he said. “During the shutdown, one musician recorded several pieces and we would upload them from time to time, so people could hear their favorite hymns. I think most people prefer in-person services, but people appreciated the recordings when that was the only option.”

Both Trinity Lutheran and Wanamingo Lutheran’s re-entry teams are working on their preparedness plans to be able to return back indoors in October. After in-person services resume, Chris Culuris says services will still be recorded online, keeping those who are older and/or with underlying health concerns with mind.

Through posting services online, he said it’s been “fun” watching where viewers are tuning in from, including area nursing homes and even some across the country. Although helpful to use as a tool to reach out to the congregation, technology created some challenges and also helped staff learn a thing or two.

The process included getting a streaming device to record the services with, recording the sermon, putting the audio online, recording music, obtaining a copyright license and streaming license, and showing that recording online. Chris Culuris says the churches already have the basic copyright license covering content in the bulletins or on screens during services, but getting those services online created another set of hurdles to jump through.

“It was another lesson learned,” he said, “but I was happy to do it because it was the right thing to do. There’s been lots of changes, lots of learning on the fly and needing to be flexible.”

Pastor Pat McBride, of New Life Church of Wanamingo said at the beginning of the shutdown, they really had to scramble for alternatives, especially since the church hasn’t ever posted anything on YouTube before. With the help of one member of the church, worship services were put up online with just some minor glitches. After accomplishing the first challenge, McBride says the second challenge is helping those who feel unsettled with some of the situations, like those who find it uncomfortable to wear a mask.

Overall, McBride says they are doing OK with all the changes, from hosting parking lot services for several weeks in early June, to removing half of the seating inside to keep with the recommendations and mandates. McBride says he continues to livestream the services online and even uses a small, AM transmitter to transfer the service to those in the parking lot.

“I know leadership really appreciates our people’s flexibility and hanging in there together,” said McBride. “One thing that has been encouraging is the level of giving … even when we weren’t meeting.”

Moving ahead to fall, McBride says the church is making plans for children’s programming and Sunday school, some things that were put on hold as soon as the Stay-At-Home order was put in place. He also finds the array of viewers interesting, ranging from some that have been a part of the church and several who haven’t.Reach reporter Michelle Vlasak at 507-333-3128 or follow her on Twitter @apgmichelle. ©Copyright 2020 APG Media of Southern Minnesota. All rights reserved.

Reach reporter Michelle Vlasak at 507-333-3128 or follow her on Twitter @apgmichelle. ©Copyright 2020 APG Media of Southern Minnesota.  All rights reserved.