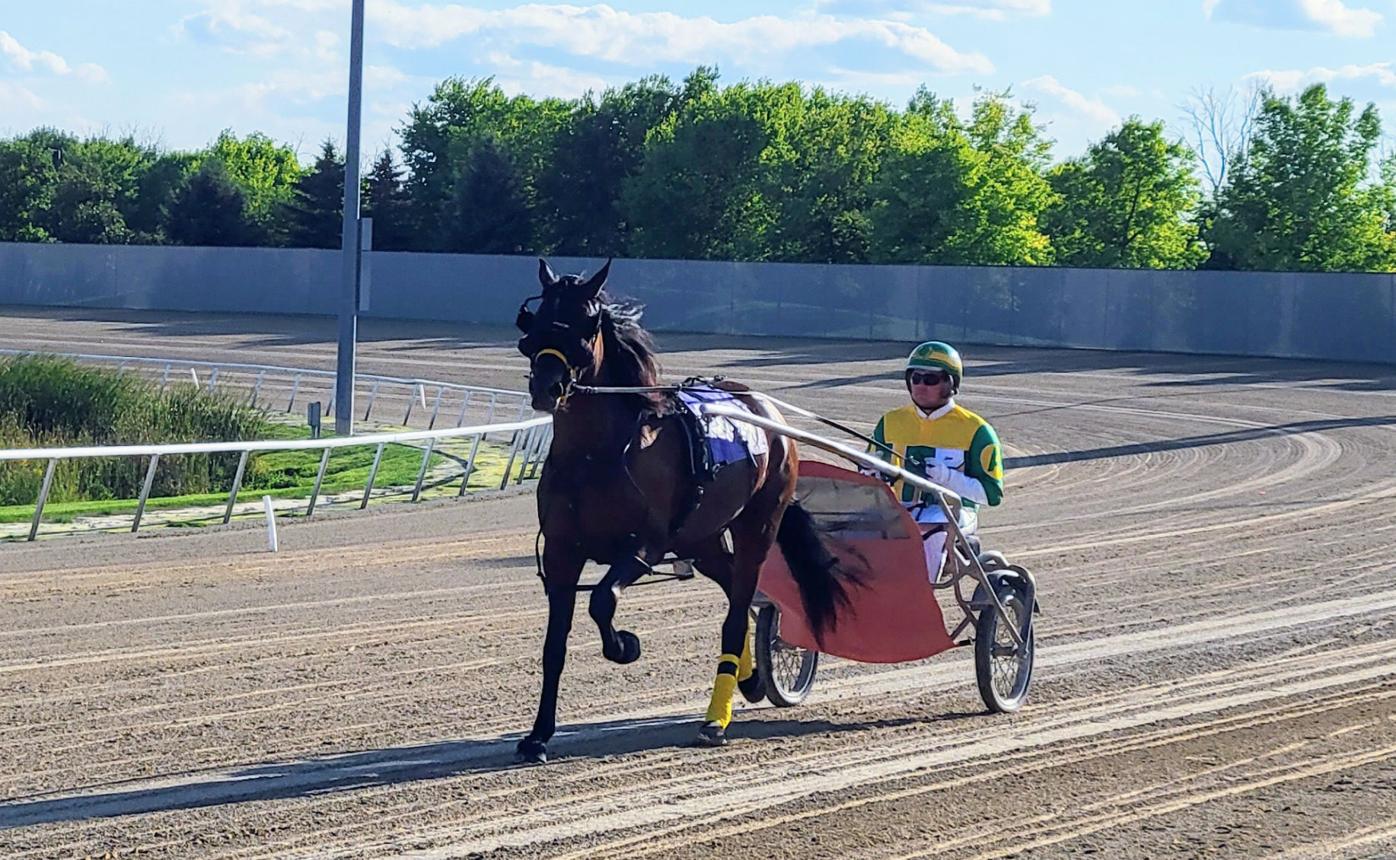 Justin Anfinson, of Kenyon, races down a dirt track during a previous harness race. Though he doesn’t drive in races anymore, Anfinson instead invests his time in training and preparing horses for races. (Photo courtesy of Justin Anfinson) 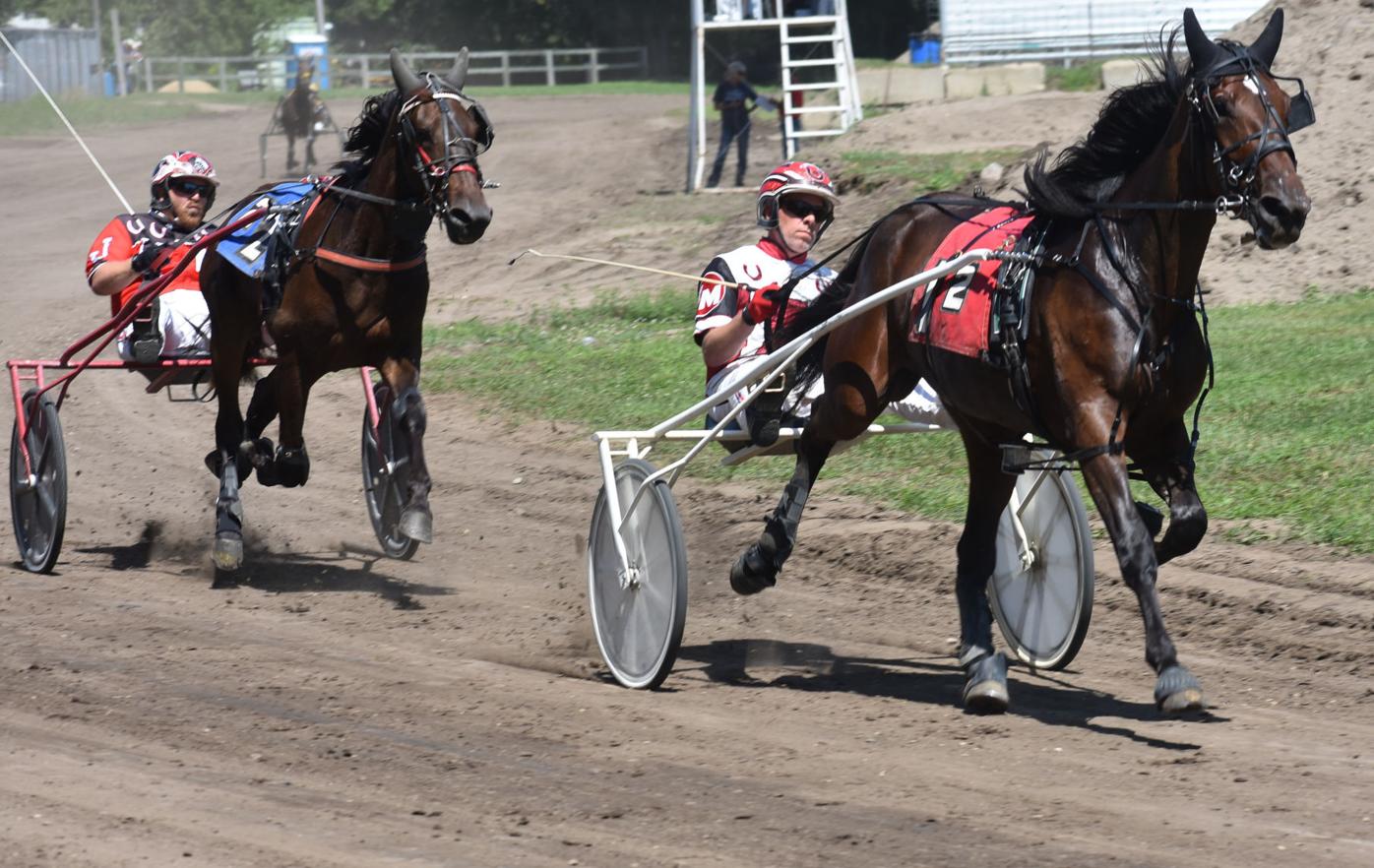 From the trainers, owners, breeders and grooms, it’s all hands on deck to get a horse ready to compete in a harness race.

Though the race itself consists of a mile run — about a 2-minute journey down the track — horses require months upon months of preparation and training beforehand. For Justin Anfinson, that means working seven days a week and hoping all of his hard work pays off at the race track.

Horses start training at a young age, he says it takes a lot of practice and preparation to get the horses to do the correct things and going the right way.

A Kenyon native, Anfinson is an owner, trainer and breeder of harness horses. He was elected president of the Minnesota Harness Racing Association in 2019, after about eight years of serving on the organization’s board of directors.

The MHRA represents all of the drivers, trainers, owners and grooms who work in the Minnesota Standard bred industry. Organized in 1951, the association continues to “promote and protect the welfare of the horses they race and those involved working with these extraordinary animals.”

Harness racing has become a passion of Anfinson for many years. He followed in the footsteps of extended family and is continuing the family tradition with immediate family members.

Growing up watching his grandfathers, uncles and cousins train horses for harness racing in Cannon Falls, Anfinson decided he, too, wanted to try it out for himself while in high school. He would attend county fair after county fair watching his family, and took occasional trips to the track at Canterbury Park in Shakopee. Now, Anfinson travels to various fairs in Minnesota and Iowa, and races his horses at Running Aces in Forest Lake.

Anfinson’s family has been in the business since the 1970s, and he started training about 17 years ago while attending Kenyon-Wanamingo High School.

He now lives in Kenyon with his own family, and trains on his family’s Kenyon farm. Outside of training runs on the farm’s dirt track, Anfinson doesn’t drive horses himself, but rather focuses on training the Standardbred horses, both his own and others’.

While the race itself is an adrenaline rush, Anfinson personally enjoys the challenges that come with training.

“I like working with young horses and the challenges they give you, fixing them and figuring it out and hopefully winning,” said Anfinson.

He says his family also enjoys attending races, and most family members own at least a few horses.

Brian Anfinson, Justin’s father, too, enjoys the challenge of racing. He also helps train the horses for races, and races in Iowa on the weekends.

“I like seeing the young horses each year and how they are going to do,” said Brian. “I also like to win, that’s all part of it.”

Brian says that his entire immediate family is involved in harness racing to some degree.

From May through September in Minnesota, Justin can likely be found on the road or at a fair/race. This fall, Justin will leave for Kentucky until the first of the year for more racing action. The rest of the year, he works on getting the horses getting ready to race.

With harness racing a growing sport in Minnesota, Anfinson says it’s growing. The money, he said, is an added bonus and brings in more racers. When the money gets better, the number of horses racing increases.

Along with races at Running Aces track in Forest Lake, races take place locally in areas like St. Peter, Cannon Falls and Wheaton.

1. Harness racing in North America is Standardbreds only. The Standardbred name origin comes from the ability of the horse to pace or trot a mile under a "Standard" amount of time in order to be registered in the official breed registry. While also bred for speed, Standardbreds tend to be more densely built than their Thoroughbred cousins.

2. Standardbreds race in one of two gaits. Either pacing or trotting. Typically, Standardbreds are bred to be either pacers or trotters, but there are some who can race in both gaits. The ability to pace is genetic and controlled by the "gait keeper" gene.

3. Harness races start at speed behind a mobile starting gate. The horses line up being the gate attached to a starting gate vehicle, and when they reach the starting pole the vehicle pulls away, the arms of the gate fold in, and the race begins.

4. The average speed during a race ranges from 25-30 mph depending on the level of horses competing. However, at the start of the race, and coming down the home stretch these speeds can spike to over 35 mph

5. The horses race pulling a sulky (more commonly known as a race bike), which is a two wheel chart pulled by the horse during a race. It’s very lightweight and seats the driver very closely behind the horse. It is designed specifically for racing and built to create the least amount of drag possible.

6. Horses can race from ages 2–15 years old. Horses starting prepping for the race world being handled by people at an early age. Stake races start for horses during their 2 year old year, and horses are allowed to race until they are 15 years old before they are required to retire.

7. The drivers wear their own color and design specific outfits. In horse racing the person directing the horse wears "silks" or "colors" that makes them easily identifiable. Their outfits are often colorful, and are registered in a national database so no two outfits are the same.