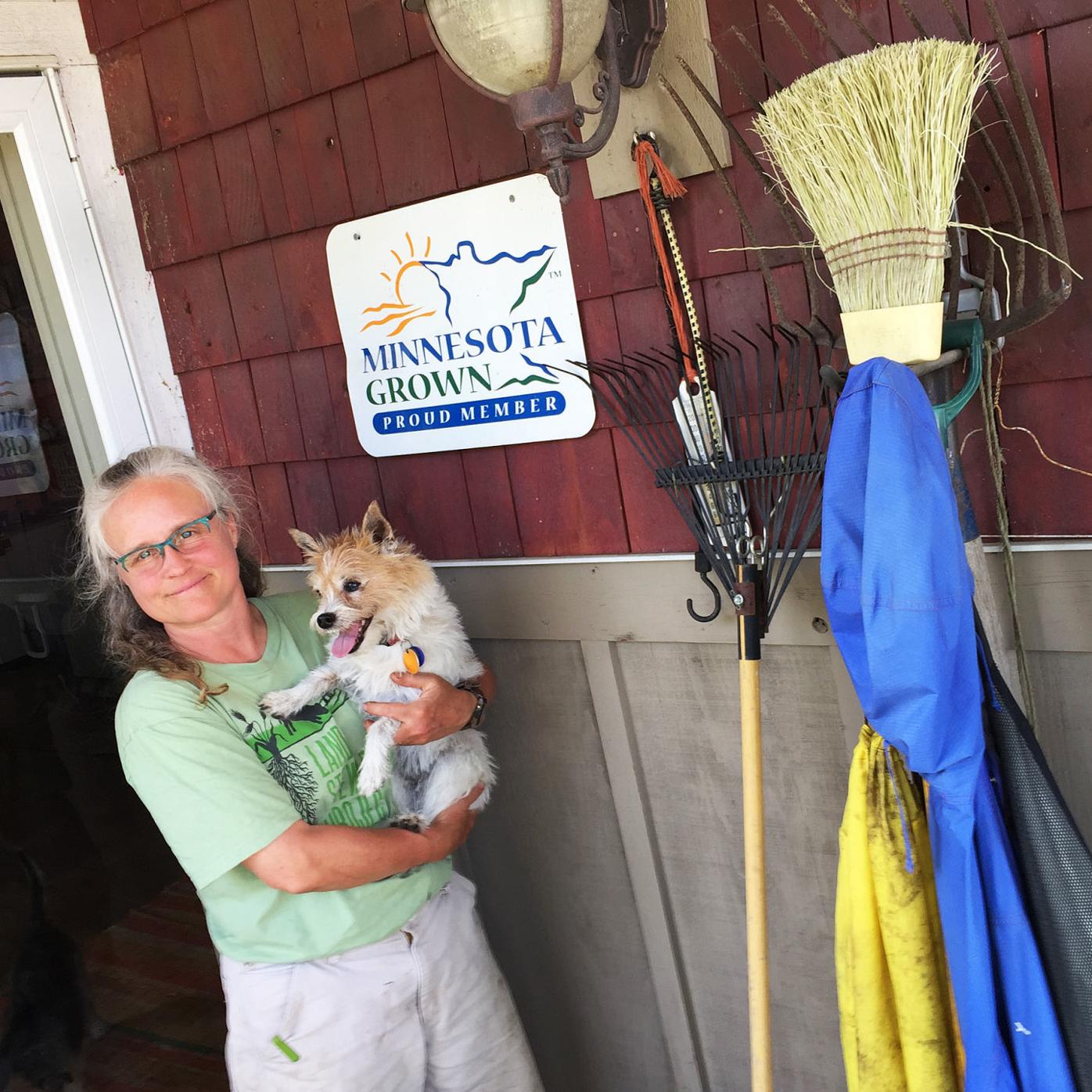 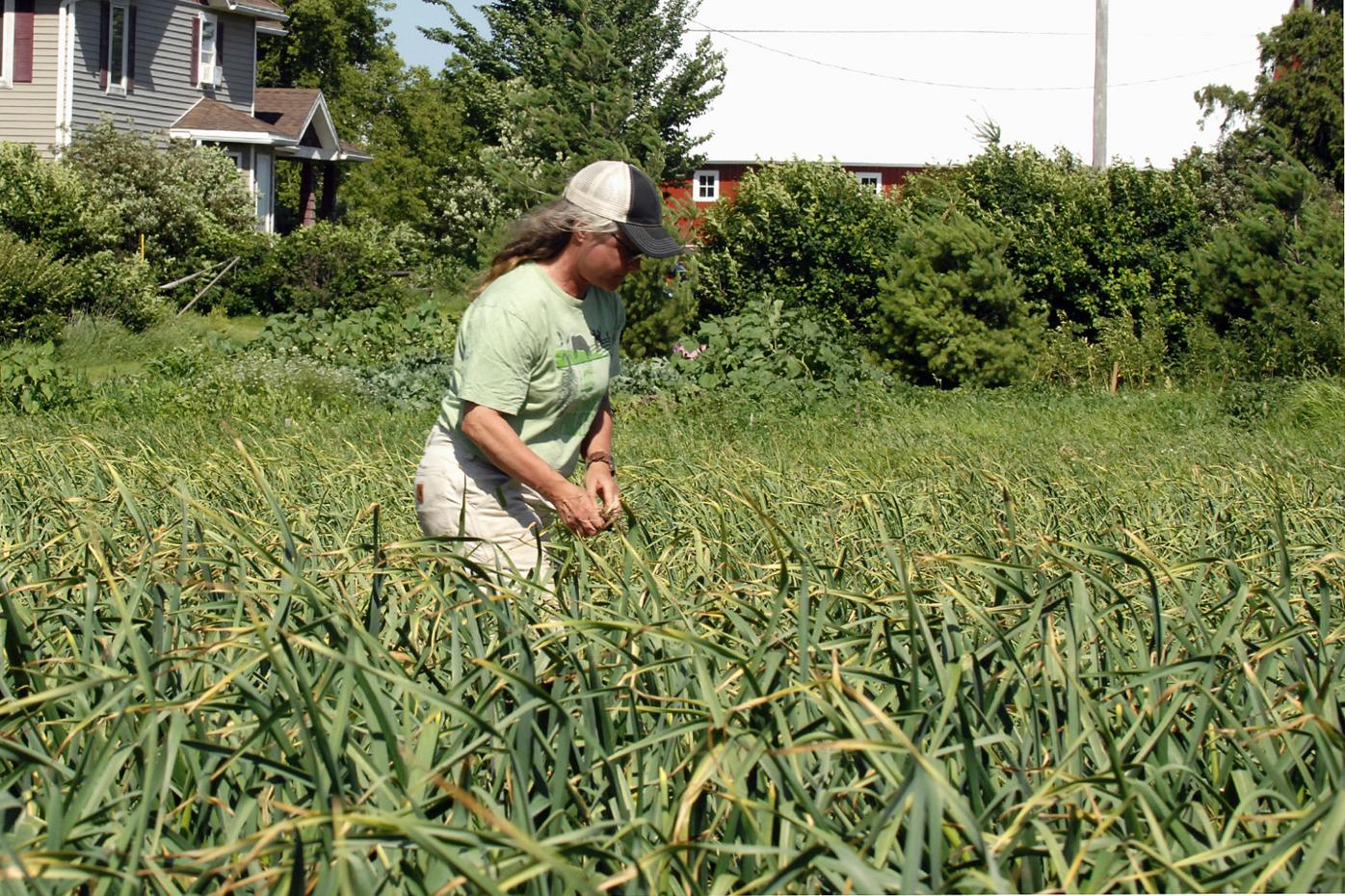 Tall garlic plants make up one of the four organic food plots at Seven Songs Organic Farm near Kenyon. Melissa Driscoll walks through the field to remove any weeds by hand. (Terri Washburn/Kenyon Leader) 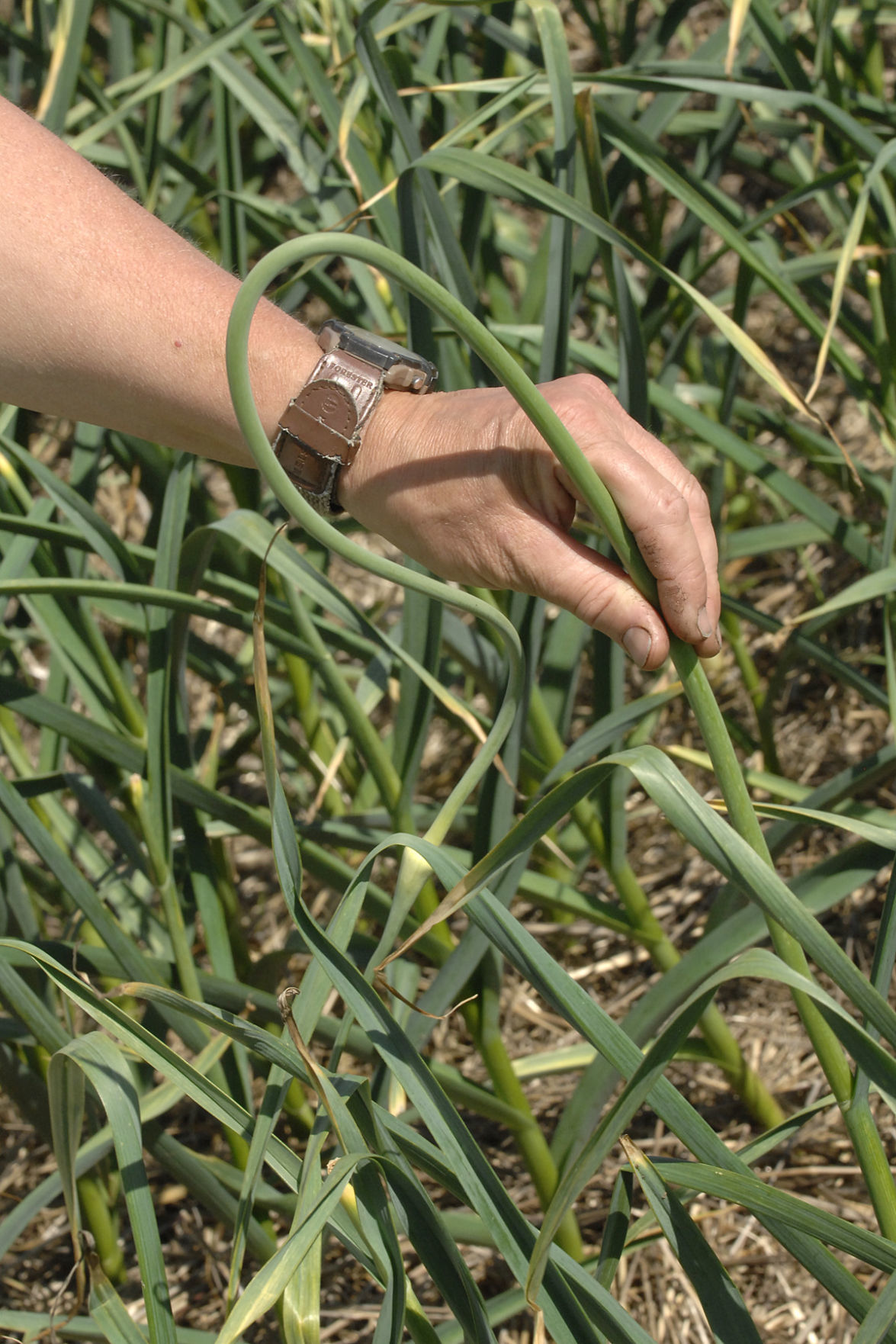 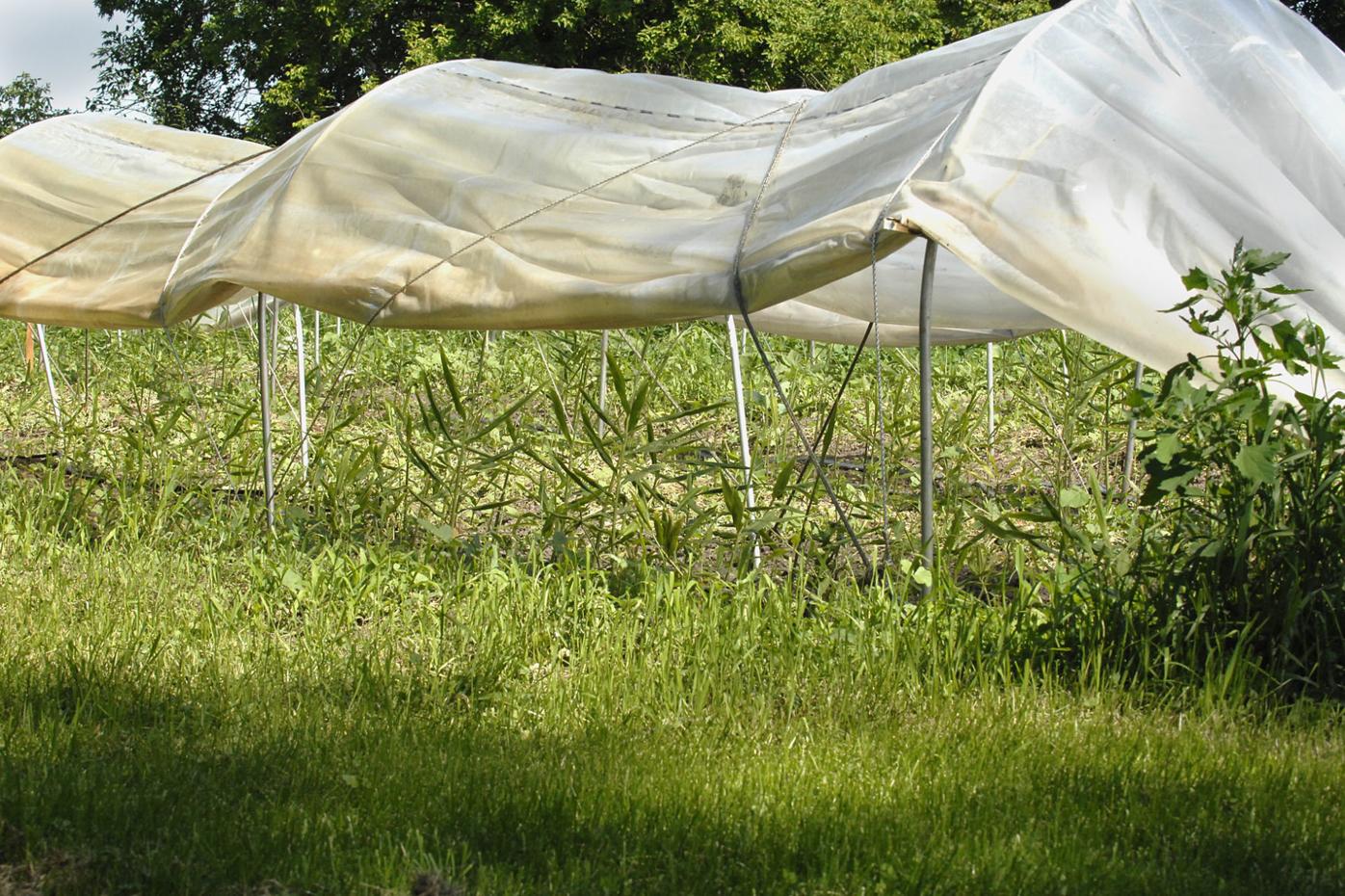 Tall garlic plants make up one of the four organic food plots at Seven Songs Organic Farm near Kenyon. Melissa Driscoll walks through the field to remove any weeds by hand. (Terri Washburn/Kenyon Leader)

From Minneapolis to Kenyon

Melissa Driscoll went from being very active in several Minneapolis community gardens to developing a small organic farm in rural Kenyon after moving here in 2010 with husband Jay Hambidge.

While it has been a learning process, Driscoll says her first interest continues to be protecting the land and being a good steward of the earth. With an undergraduate degree in anthropology and a master’s in conservation biology from the University of Minnesota, her day job is as a conservation biologist for the Minnesota Department of Natural Resources.

Eating and raising organic food is a lifestyle choice that makes good sense to Driscoll, from both health and conservation standpoints. Their Seven Songs Organic Farm sits on seven acres of land just south of Bombay.

Driscoll explained that she loves music as well, so the name Seven Songs seemed to fit well. Besides correlating to their acreage, the number seven is also representative of seven base components of farming; the four directions plus sky, earth and the farmer’s labor.

Her farm has a 30-foot buffer strip of native prairie plantings abutting the farmland of neighbors Jeff and Karen Davidson. Planting the buffer was expensive, she said, but it is home to many birds and insects and attracts pollinators.

Seven Songs utilizes four rotational field areas plus a hoop house. Standing in the fields along their driveway, Driscoll pointed to indicate a plot with rows of heavily mulched garlic. A member of the Upper Midwest Garlic Growers, she raises nine different garlics, both hardneck and softneck varieties with names like German extra hardy, Romanian red, purple glazer and music.

Last Saturday, Driscoll hosted a farm day for growers involved in The Garlic Project, a program of the Sustainable Farming Association that is funded by a Specialty Crops Block Grant through the Minnesota Department of Agriculture. She presented her research on storage of different types of garlic, information that is useful for producers and chefs alike.

Of the 930 garlic plants set by hand at Seven Songs last October — garlic is planted in the fall and winters over to grow the next season — most of it will go to a chef-owned restaurant in the Twin Cities. Driscoll also sells about 100 pounds of garlic plus the ginger she grows to a kimchi maker.

She said it takes time to develop solid relationships with her clients, and working with a chef who owns their own restaurant provides a measure of stability.

In the spring, she harvests the scapes, or green tops of the garlic, and uses them to produce a value-added product that she branded Escape Pesto. Made with scapes, basil, organic cheeses, olive oil and pumpkin seeds, she freezes the jars of pesto and sells most of them through retailers such as Valley Natural Foods in Burnsville, Seasoned Specialty Store in St. Paul and Ruf Acres in Faribault. Driscoll has been making and marketing Escape Pesto professionally since 2013.

The second rotation plot is in a cover crop this summer, keeping out weeds and building up soil nutrients. Oats and peas work well in the cool season, she said, and buckwheat is used in the warm season.

In the third plot, Driscoll planted a variety of vegetable crops and herbs. Cilantro, peppers, kalettes, Swiss chard, beets, squash and more are used for their own consumption and also sold commercially. Most of her produce is contracted to restaurants, but she also does a booth at the Mill City Farmers Market several times in the fall.

Farther in by the storage and pack shed barn, the tall hoop house is growing mostly berries and tomatoes this year. In the fourth food plot, rows of short hoops cover slim young ginger and turmeric plants.

Driscoll used grant funding to do research on growing ginger and turmeric in Minnesota under the small hoops and found that soil temperature more so than air temperature was an important factor. She plucked a leaf from a ginger plant and the crisp clean fragrance of ginger was strong.

Near the low hoops, several small brood house pens keep hens with small chicks separate. The big mobile pen with laying hens is surrounded by an electric netting fence. The eggs are certified Animal Welfare Approved, and the chicken flock has ample room to move about and forage in the grass.

In 2010 Driscoll and Hambidge invested in a new roof and siding for the old dairy barn on the property. After several years of renting packing space elsewhere, they did a major barn renovation in 2016-2017. With advice from Farm Business Management teacher Jennifer Smith of Riverland Community College, they set out to remodel the barn into a usable pack shed and storage area for equipment.

Driscoll utilized a MDA grant to cover a quarter of the cost to create the packing shed, garlic drying area and loading dock. A value added loan from SFA and their own capital outlay financed the remainder of the project.

The result is a modern work space that stays cool in summer and above freezing in winter. A walk-in cooler stores scapes and other products, and the work area has plenty of space for packing and another freezer for the pesto.

A wide staircase leads up into the loft where the wooden beams of the structure arch overhead in provincial beauty. Driscoll said she has ideas for someday holding events in one side of loft. On the other side, garlic is measured and then bundled in groups of 10 and then hung to dry on long wooden racks.

Organic farming requires its share of sweat equity, but Driscoll says she wouldn’t do it any other way. With help from friends during the more labor-intensive times, they are able to preserve a way of agriculture that has significant value.