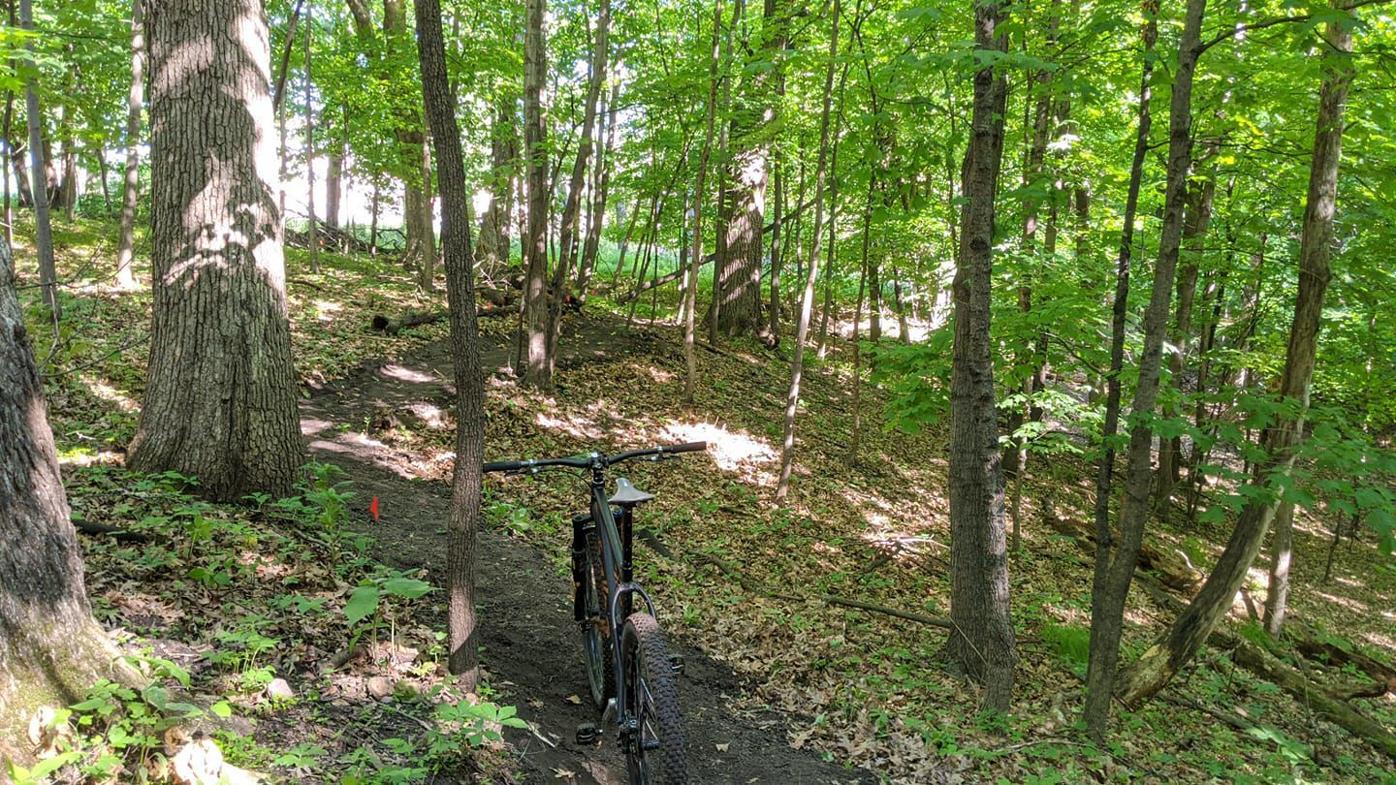 In the late spring/summer months, bikers have the opportunity to travel through a canopy of green, with light rays shining through the leaves. (Photo courtesy of Cannon River Offroad Cycling and Trails) 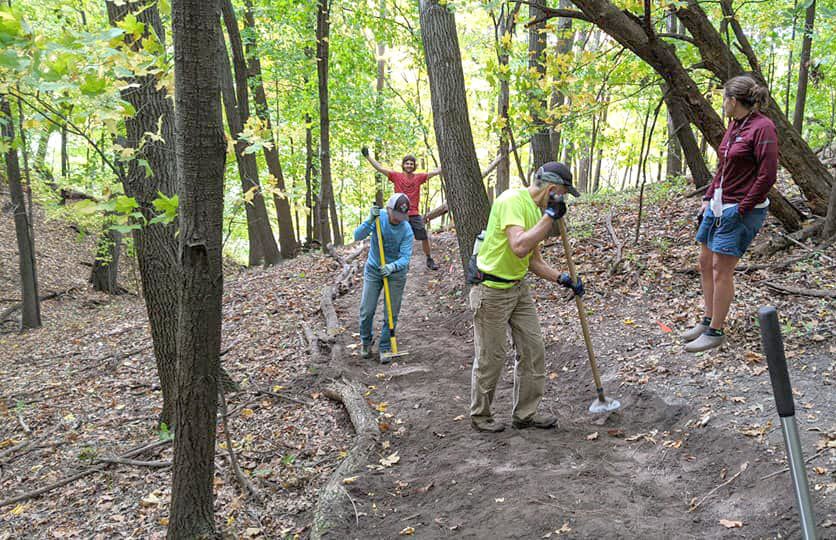 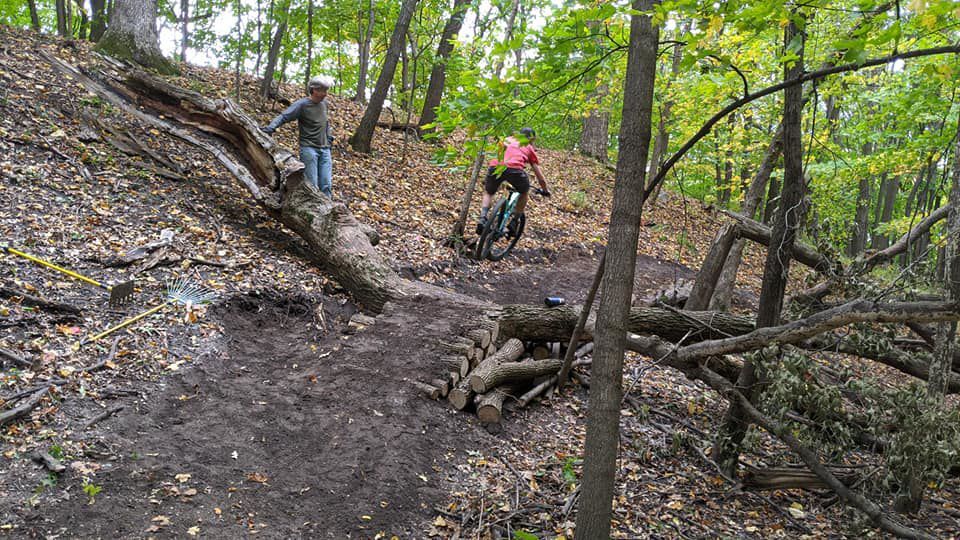 Oftentimes obstacles found when building trails are used to create features like a bike jump/ramp, as pictured. (Photo courtesy of Cannon River Offroad Cycling and Trails) 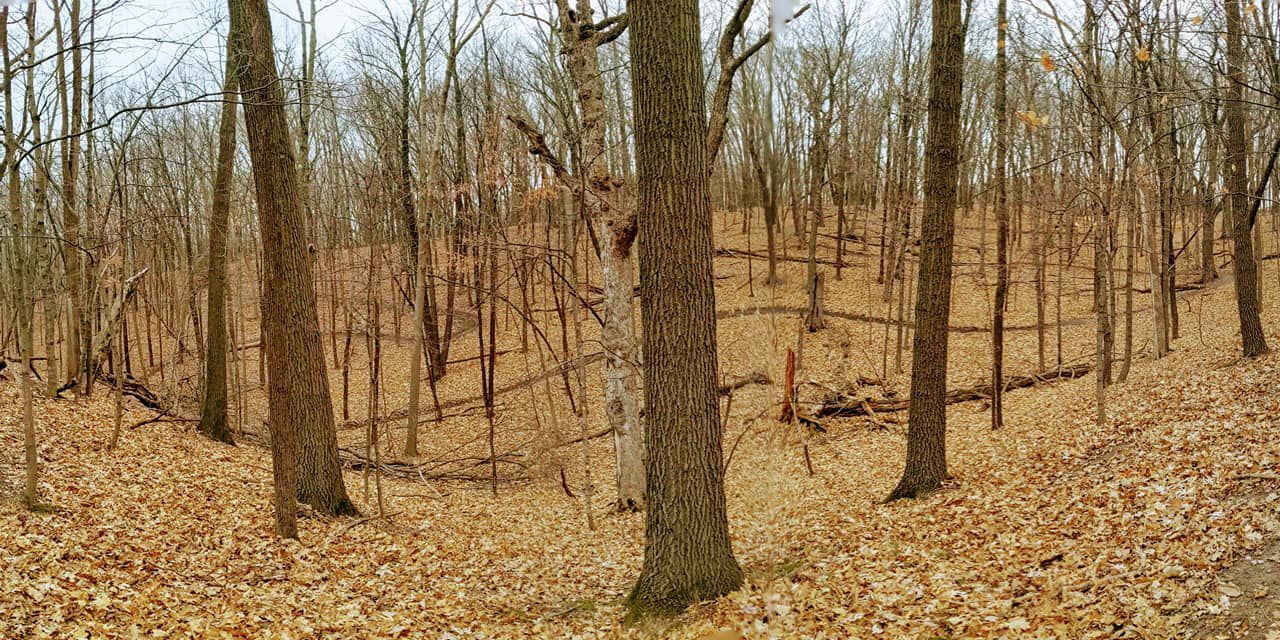 The Shattuck-St.Mary’s Mountain Biking Trail has one final section that needs to be built for to be considered Shattuck a completed system. CROCT members believe the trail shows the potential of the terrain in the area and what can be done for natural surface trail development. (Photo courtesy of Cannon River Offroad Cycling and Trails) 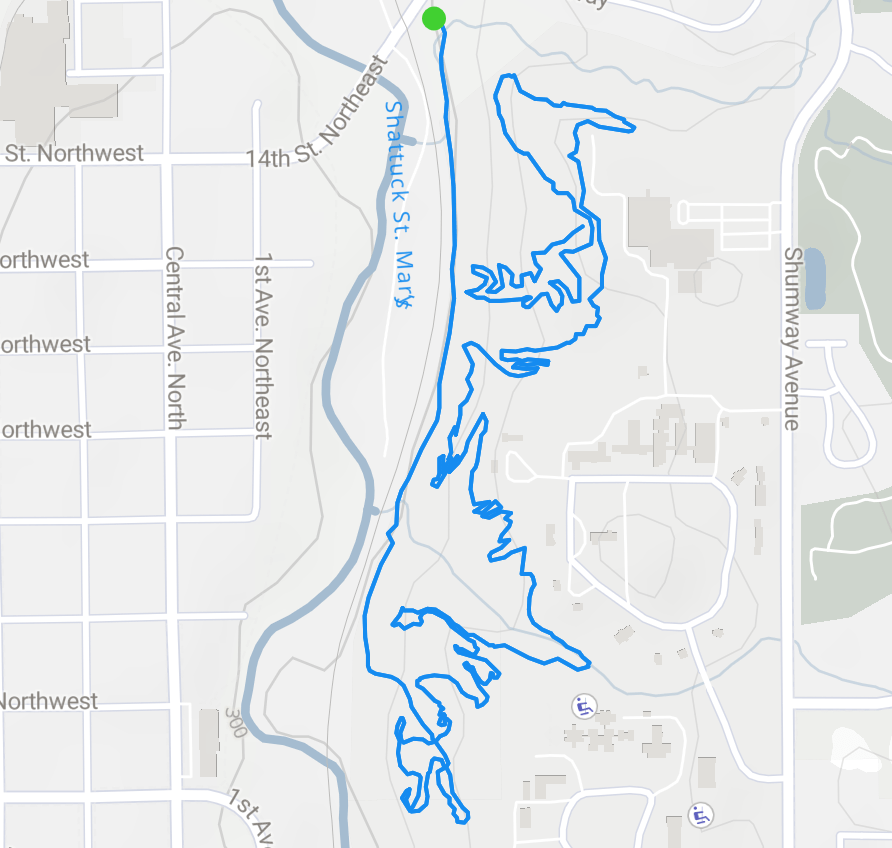 CROCT members encourage bikers to access the trail via 14th Street, by the green dot in the map. A blue gate is located across a gravel access road just to the north of the railroad tracks. Members urge bikers not to park in front of the gate, but to the side or on 14th Street. The trail head access is a short distance past the gate on the left hand side. (Map courtesy of Cannon River Offroad Cycling and Trails)

With closures and stay-at-home orders put in effect due to COVID-19, there’s been a noticeable uptick in residents enjoying the outdoors, whether it be exploring new parks or taking up new hobbies like gardening or biking.

Shattuck-’s Athletic Director Michele Cornish said there was a gap between the initial construction of the trail and the near completion of it, as initial work was finished in 2016-18. Weather played a large role in the delay of the completion to build, as scheduled build days were canceled due to rain, snow and even a tornado.

Once Cornish became the athletic director at Shattuck, she asked the new Head of Schools Matt Cavellier if they could begin building the trail again. With his blessing, and they started the build during COVID where they could be outside and socially distanced, and still be able to build/clear the trails. Though thoughts of building the trail was prevalent for several years, the recent push came when COVID-19 left some CROCT members with some extra time on their hands.

Cornish, who enjoys mountain biking and is a CROCT member, said a number volunteers from local schools and the CROCT club came out to help build trails. Bikers began utilizing the trails last May.

“We had a really committed group of adults who want to get people on bikes,” added Cornish.

According to its website, CROCT works to advocate for, build, maintain and enjoy sustainable trails for offroad cycling and other recreational use in the Cannon River region. The club first started getting together in February 2014 and with the permission of the city of Northfield and its Park and Recreation Advisory Board, opened their first trail in that city’s Sechler Park in November 2014.

The Shattuck-St. Mary’s Mountain Biking Trail is a total of about 5 miles and is described as an intermediate trail. This trail, Todd Trembley of Milltown Cycles in Faribault says, is the club’s biggest trail system and is challenging both physically and technically.

Mountain bikes are built for traveling over rough, challenging terrain, though, Cornish said, there is one section behind the Minnesota State Academy for the Deaf ideal for those new to biking. Cornish said the trail in general is a nice place for all people to ride over a little different type of terrain than what’s available at River Bend Nature Center.

“It’s really fostered some sincere interest in the community in mountain biking, with people who might not have known about it seeing it as an area to come and bike,” said Cornish.

Though the trail is rideable now, it will be a little more accessible once the final stages of construction are complete. Cornish hopes they will be complete the final touches by late spring/early summer. A few changes and additions, and additional miles are expected to be added in the near future.

Though the trail is on Shattuck’s property, Cornish says all are welcome to use it and urges all those who do use it to be respectful and pick up after themselves. She considers Shattuck staff and students to be very lucky that the trail is right in their backyard, so students are able to walk out of class and ride the trails if they want. Cornish also hopes it will bring other members of the community to the campus and see what is going on.

“It’s just wonderful, it can be as challenging or as easy as you want it to be,” said Cornish.

Cornish hopes they will be able to hold some sort of grand opening once if is safe to gather together again. Utilizing CROCTC members’ knowledge to build the trails, both Shattuck staff and students, and CROCT help maintain the trails, picking up fallen branches, leaves and fixing the trails as needed.

“Biking is a pretty big community and everybody recognizes in order to have trails you have to put in the work, the elbow grease,” said Cornish.

To stay up to date on the latest conditions or upcoming build days for the Shattuck-St. Mary's trail, see facebook.com/Cannonriveroffroadcyclingtrails or roct.org.

Those interested in making a donation to CROCT, a 501c3 tax-exempt non-profit are encouraged to write a check and send it to:

All donations are tax-deductible.

Shattuck-St. Mary's Mountain Biking Trail runs through what used to be the the Fleckenstein's property.

The Fleckenstein family, which had been in the brewery business in Bavaria since 1577, came to America in 1850. Upon arrival in Minnesota, they began to build the family business in Faribault. This was an ideal location because of its artesian water, ample grains and the Straight River Bluffs, which offered a good location to make cool lagering rooms for the beer. The Fleckenstein Brewery began operation in Faribault in 1856 and would produce assorted beverages for the next 108 years. An exhibit that features a wide range of photos and objects from the Upper and Lower Breweries is available at the Rice County Historical Society Museum for viewing.

Some remnants of the brewery remain in the area like a cement stand that the original beer bottle stood on for many years. Local historian Brian Schmidt indicates every time a label was changed, the cement bottle was changed with it. The beer bottle was also a staple for customers to take a photo next to as they picked up their beer or pop. For bike riding enthusiasts to be able to capture a piece of history, Schmidt sees the idea as a great way to draw people to town and take a ride through history.