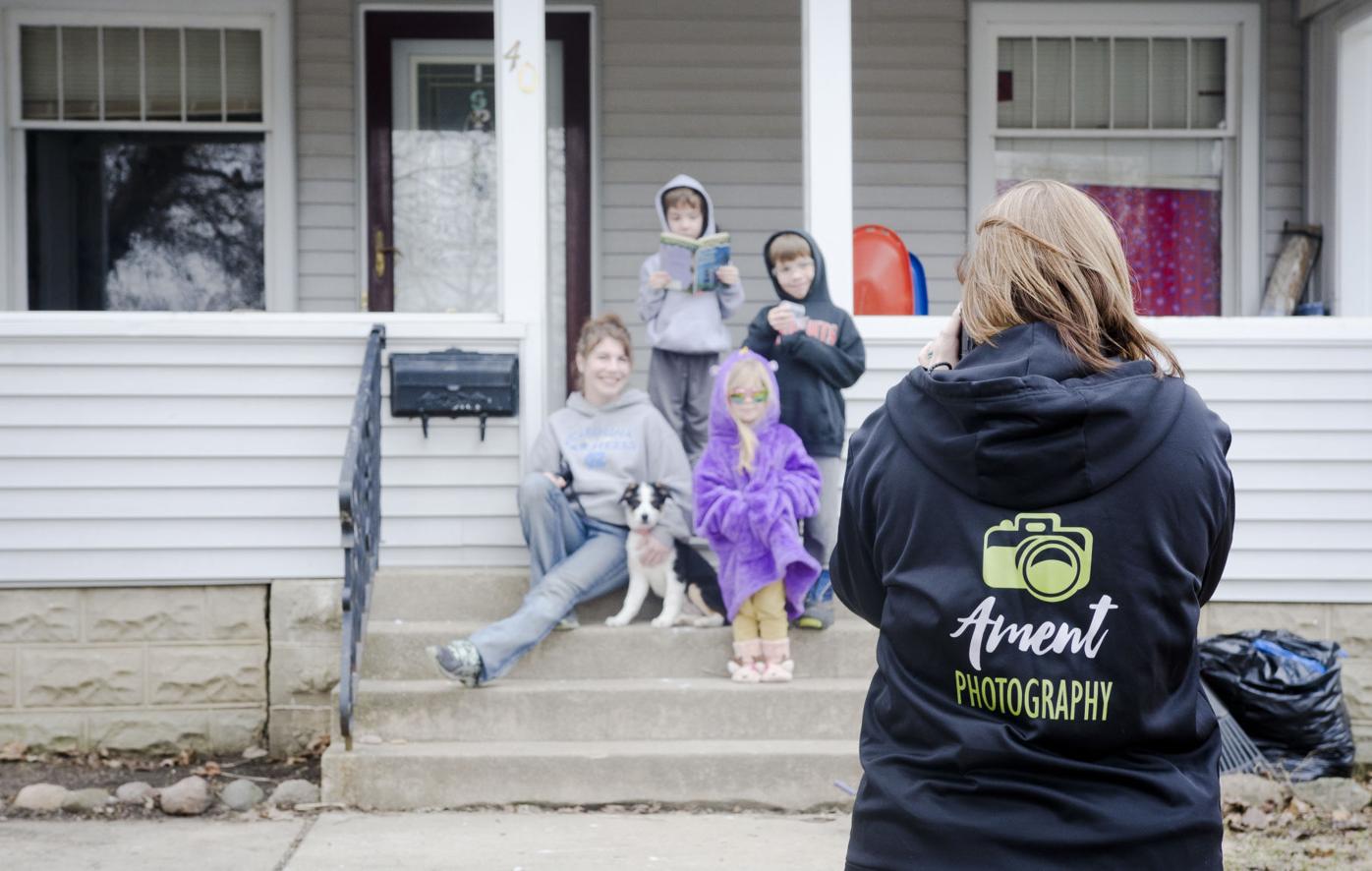 Bailey Ament takes a photo of a Kenyon family in March, who are displaying different activities they have taken part in, like reading books, doing science experiments, taking their puppy Sophie for a walk and choosing their own outfits since being asked to distance themselves socially. (Michelle Vlasak/southerminn.com) 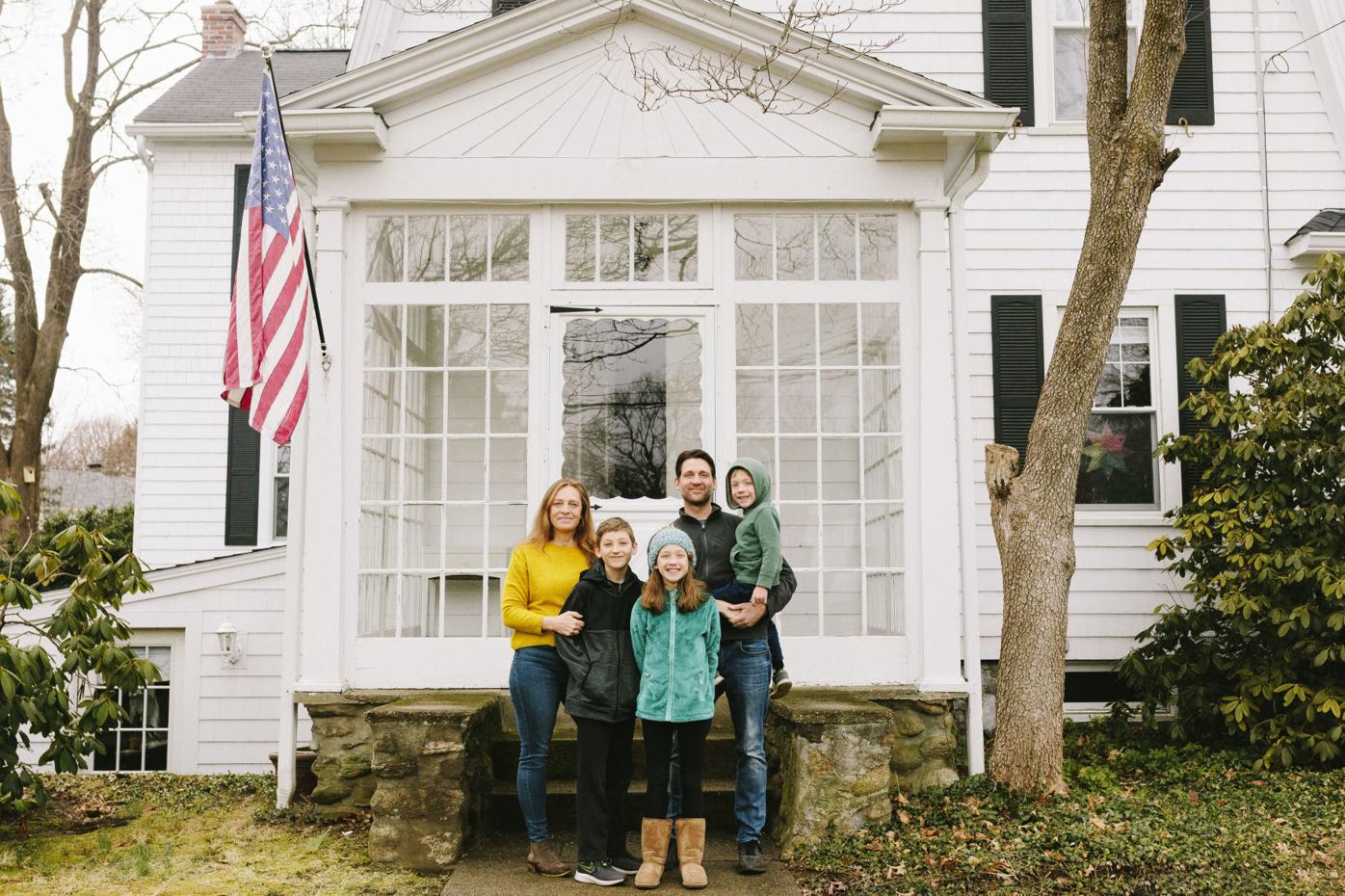 A project many photographers are taking part in across the globe, #thefrontstepsproject, was created by Boston photographer Cara Soulia and marketing consultant Kristen Collins. Pictured is Cara with her family, in the first photo taken in the project. (Photo courtesy of Cara Soulia Photography)

Bailey Ament takes a photo of a Kenyon family in March, who are displaying different activities they have taken part in, like reading books, doing science experiments, taking their puppy Sophie for a walk and choosing their own outfits since being asked to distance themselves socially. (Michelle Vlasak/southerminn.com)

A project many photographers are taking part in across the globe, #thefrontstepsproject, was created by Boston photographer Cara Soulia and marketing consultant Kristen Collins. Pictured is Cara with her family, in the first photo taken in the project. (Photo courtesy of Cara Soulia Photography)

In a time where their photo sessions and scheduled events are on hold, photographers across the world are taking part in a project widely known as “The Front Steps Project” as a way to bring local communities together during this historic, unprecedented time of isolation and fear.

The project began in Needham, Massachusetts, soon after the 40,000 population town learned of its first confirmed case of COVID-19, which sent the community inside their homes. Marketing consultant Kristen Collins, thought of the idea while thinking of her friend and colleague, Boston photographer Cara Soulia, and how the social distancing was impacting her business. They work on the project together, with Collins running the operation — collecting addresses, making maps and keeping tabs on the social media — while successful, newborn and family photographer Soulia photographs the families on their front steps, using equipment that enables her to keep a safe distance of 10 feet or more away from the families.

Together, Collins and Soulia have helped get this project off the ground as a way to connect with the community.

Collins says the project’s mission is to “highlight the faces of [their] community during a time when [they] might not see them in passing at the grocery store, coffee shop, on the train or at the gym and [they] may be temporarily separated, but [they] are always united.”

In return for taking a photo of families, they ask for a $50 donation to be donated to the Needham Community Council, which Collins says is the centerpiece of the town. Throughout the last five days, Collins says they have had 500 inquiries, and luckily had two other area photographers reach out to help out. Their project has gone viral to areas all over the United States and in countries such as Canada and Mexico. The outpouring of success has led Collins and Soulia to create a website to merge all of their content into, with the hopes to include other photographers results as well, as their project keeps on growing. Collins says Soulia also put a guide together to help other photographers get started on the project.

“My assumption is every resident of the project … is so excited and thrilled, it’s almost like [we are] the ice cream man,” said Collins in her recollection of the project. “Families have been cooped up, schedules are gone … we are documenting Needham at an unprecedented time … and we get to show families joy, we are together.”

Kenyon photographer, Bailey Ament of Ament Photography is taking part in the project. Specific to the Kenyon region, Ament asks clients to donate funds to be put to area businesses like The Kenyon Bar and Grill and Che Che’s Lunchera which have been providing free lunches for school-aged children throughout the last week.

“[Donations are being directed to those two businesses] to help conquer some of the costs,” Ament said. “If we can do this, and it offsets some of the cost for them that’s fantastic.”

After Ament noticed “The Front Steps Project” on a friend’s photography page, she began thinking of ways to incorporate that idea into her community and to branch out into documenting the whole town of Kenyon and what everyone is going through. Ament reached out to City Hall if it would be interested in receiving copies of photos as a documentation, upon the approval from participating residents.

“Everyone’s been really great,” said Ament of the feedback from the project. “It’s a huge thing for me [as a photographer] to make people feel good about themselves and give them a reason to smile.”

Since people have been cooped up inside of their homes, Ament makes sure residents know that it’s not a “typical get dressed up and pose for the photographer session.” She encourages residents to stand outside in their pajamas and slippers if that’s what they want to do and to let children pick out their own outfits, whatever each person decides to do is OK with her as long as they are just being themselves.

“I am letting people think outside of the box,” said Ament.

Ament hopes that other photographers in neighboring cities also take part in the project.

“It can change someone’s month, by giving them something to look forward to,” Ament said. “I’ve contacted a few of my photographer friends about it, but hopefully someone will catch onto it and run with it.”

Susanna Mariette, of Suzie-Q Photography based in Faribault, has opted to offer residents of Faribault, Kenyon, Owatonna, Northfield and Prescott, River Falls and Hudson in Wisconsin (where she’s originally from) the opportunity to take part in The Front Steps Project. Mariette also saw the idea on a photographer friend’s page and thought it was a “great” idea that would let her continue her photography while giving back to others.

Similar to Ament’s approach, Mariette encouraged participants to come out in their “normal clothes,” which is also what her friend did for her sessions. Mariette also told them to bring props of what they have been doing, as a way to document the whole experience.

“I’m excited to see what people bring,” said Mariette who plans on photographing families over the weekend. “I think my friend had someone come out in robes, so I’m looking forward to seeing what people come out with.”

Mariette hasn’t yet committed to what nonprofit she will donate funds to, but she is leaning toward Second Harvest Heartland, which provides access to food surplus and grocery donations.

Debbie Vosejpka of Cherished Moments Photography, based in Lonsdale, is focusing on her hometown before venturing out into the offered areas of Montgomery, New Prague, Northfield, Faribault and Dundas. She plans to ask participants to donate to a local nonprofit organization, in return for her services.

“My idea around offering something like this, is that it’s our way of giving back and putting some smiles on families faces after being cooped up for days on end,” said Vosejpka. “While remaining at least 10 feet away, to stay in line with social distancing.”

Vosejpka has keyed in on the excitement of participants. She says everyone who has contacted her is “super excited,” and notes that the children are going crazy in over the opportunity. Similar to other photographers’ approaches, Vosejpka encourages participants to “do whatever they want,” whether it be a funny portrait to display what they are going through at this point in life, or taking the opportunity to receive a nice family photo.

For Vosejpka, she sees “The Front Steps Project” as way to give photographers something do (that they already enjoy), while simultaneously giving participants something to do with their time as well.

“I’m excited to be able to put smiles on people’s faces,” said Vosejpka. “We’ve all been isolated for so long, it gives somebody something to look forward to.”

Search the hashtag #thefrontstepsproject to see results across the whole world