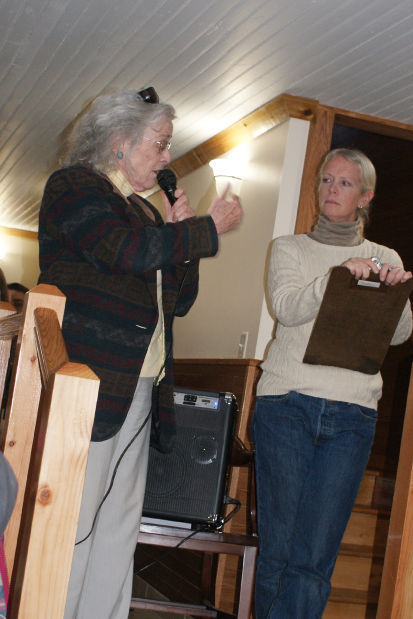 The Citizens Concerned About Rail Line meeting on March 5 in Kenyon drew around 80 attendees. Pictured are Kathy King from Olmsted County and Heather Arndt of Hader. (Terri Lenz/The Kenyon Leader) 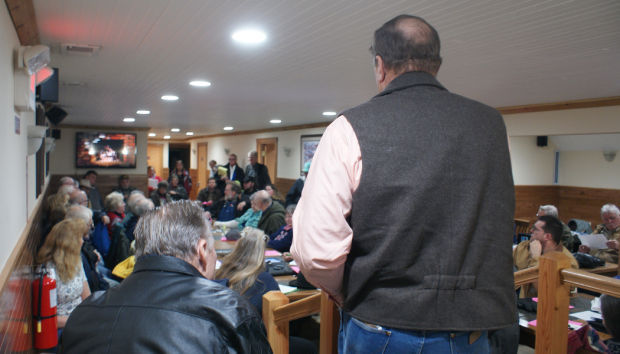 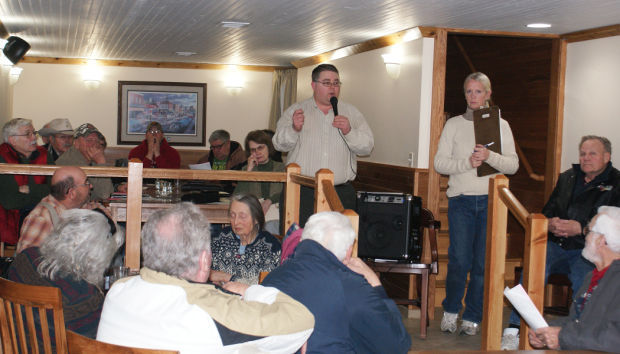 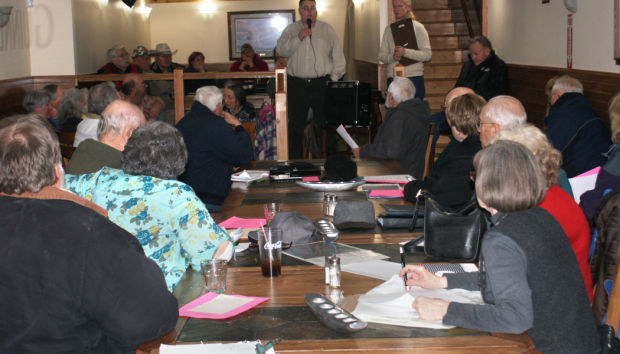 The Citizens Concerned About Rail Line meeting on March 5 in Kenyon drew around 80 attendees. Pictured are Kathy King from Olmsted County and Heather Arndt of Hader. (Terri Lenz/The Kenyon Leader)

By five minutes after 5 p.m., there was barely a spare seat for late arrivals at the Citizens Concerned About Rail Line meeting in Kenyon last Thursday. By 5:30 p.m., latecomers were filling the back hallway.

Elbow to elbow in the lower level at Schweich’s Hotel, approximately 80 people from Kenyon and surrounding communities came to learn more about the proposed Zip Rail passenger line between the Twin Cities and Rochester. One possible route follows Hwy. 52, while the other branches down west of Hwy. 56.

Concerned about their property, emergency services accessibility, route and road crossings, they got a lesson in grassroots organization 101.

Spokesperson Heather Arndt of Hader led the discussion and told about Rep. Steve Drazkowski’s HF920 bill that would prohibit Rochester, Olmsted County and the state from spending any money on the proposed Zip Rail project in exchange for more flexibility on funding administrative costs related to Destination Medical Center.

The deadline is past for applications to the Community Advisory Committee, but there is still opportunity to have more representation on the Technical Advisory Committee by township and city governments. Arndt said it is important for the committees to hear sound input from rural communities that would be affected along the Zip Rail route.

Arndt urged people to comment now through March 10 on the MnDOT Statewide Rail Plan. This plan is updated every five years, she said, so timing is important. She also advised people to keep a copy of their comments, in case they aren’t recorded correctly.

Goodhue County Commissioner Dan Rechtzigel addressed the group and said the board has commented on the state plan, making clear their unanimous opposition to Zip Rail, and continued support of freight rail.

But more action is needed, according to organizer Nora Felton of Cannon Falls. She and Arndt offered to work with township leaders to go over the issues and clarify points to aid in drafting a statement. Felton handed out copies of sample resolutions that people could take to local government officials. She also passed around petitions that people could take with them.

With township annual meetings coming up soon, the timing is ripe to take action now, they urged.

The question was posed whether the Hwy. 52 and Hwy. 56 routes were pitted against each other, and Arndt said that was most definitely not the case.

Speaking as a member of Citizens Against Rochester’s Bypass, Kathy King took the floor. She spoke about the freight rail bypass that people in Olmsted and Dodge Counties have been opposing for the past 15 years. King advised that pursued routes can and do change.

“Don’t let this divide you. That’s what happened in Olmsted County; it happened over and over again,” King said. “I will tell you, routes change. Right now you’re hearing it’s 52, it could change tomorrow and it would be 56. Don’t let 52 become the focus of opposition and forget about your 56 partners, because they are critical to the stopping of the Zip Rail. Stay together on it. It’s no build, no Zip Rail.”

Felton told the group that people along the river route are afraid that if the Zip Rail goes through to Rochester, it will go through Winona and on to Chicago, bypassing their cities. It was the original route first intended for Zip Rail, and CCARL needs to reach out to them, she said.

If that were to happen, Goodhue County would take an economic double whammy from traffic bypassing the river route cities, plus the Zip Rail being build through the greenfield property of residents.

Arndt said it is important to understand proper rail terminology. The Zip Rail would be a passenger train because it would move people between two cities. Light Rail lines would be an example of a transit train.

The terms come into play when looking at transportation legislation and funding, to know what is being included in packages and what would be funded by the proposed gas tax increase.

Mark Manning, a farmer from the Dodge Center/Hayfield had been at the state capital that day with Duane Alberts from Pine Island. They were drumming up support for the HF920 bill. He told the group that the main thrust of the legislature right now is more money for roads and bridges. But Manning also said he heard there is a largely private firm willing to fund the Zip Rail construction.

Doug Henke, a Kenyon City Council member, said people should look closely at private funding, as he has seen toll roads in other states that are owned by foreign investors, with citizens paying forevermore to drive on the roads.

Harold Radke of Pine Island gave the example of private funding used to build solar power, but investors were reimbursed for their outlay. We don’t want private funding that isn’t really private, he said.

A lady from Rochester (who asked not to be identified by name) spoke up, telling the group that there are a lot of people there who are very concerned about the Zip Rail. This is not just a rural problem, she said. I’m not interested in paying double for downtown parking, expansion and more. It will be disrupting for a lot of people and we’re not all for it.

Arndt brought the conversation back around to the planning and placement of the Zip Rail line. She said the train would operate at slower speeds in urban areas, allowing for at-grade crossings in the Twin Cities and Rochester only.

In Goodhue County, she said, there would be no at-grade crossings. All of it would be over or under the rail line, with sealed and fenced off corridors.

King spoke again, bringing up a new point. It may be more than one rail line. They map a primary route to Rochester, but there will likely be a secondary route as well in the plans to increase efficiency and prevent trains from meeting.

Arndt referenced technical memo #10, carried forward from former plans, which shows they will need two rail lines, not just one. If there is a 200 foot right-of-way for one line, what will be needed for two lines?

Stopping the Zip Rail and getting the no-build option will not be easy.

“It will take the hands, voices and minds of many people,” said Arndt.

She advised people to make theire comments specific and measurable. How much income do you lose each year if they take your farm? Do the math; numbers count in this game, she said.

The end message was mobilization and action. For the people at the meeting, who represented more than 10 cities in the area, the work fact checking and petition circulation lies ahead.

Reach Publisher and Editor Terri Lenz at 333-3148, or follow her on Twitter.com @KenyonLeader.