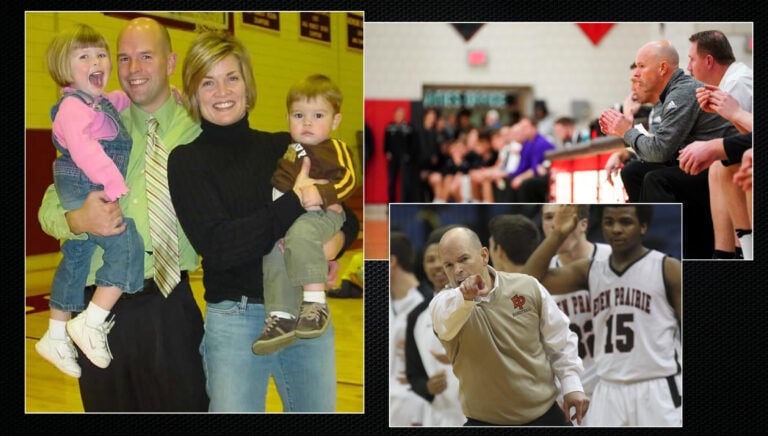 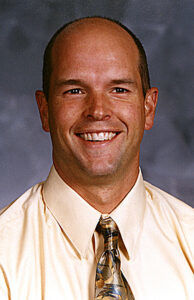 Dave Flom served as the Gustavus assistant from 2003-06.

Sometimes a reality check can be a turning point on the path to professional success.

That reality check for Dave Flom, class of ‘95, was brought to light his junior year at Gustavus Adolphus College when men’s basketball head coach Mark Hanson gave the disappointing news that Flom would no longer be on the varsity roster. Instead, Hanson offered a different path — a job as a student assistant coach.

“That allowed me to coach the JV my senior year and was my first official start in coaching,” Flom said.

The transition from a college player who, in Flom’s words, “sat at the very, very end of the bench,” to a student assistant coach proved to be his turning point to a future full of professional success. Fast forward 27 years and last week Flom was named the National High School Coaches Association’s Coach of the Year.

Flom, who coached at Chaska and Watertown-Mayer high schools after graduating from college, returned to Gustavus as an assistant coach from 2003-06.

He’s been the head boys’ coach at Eden Prairie High School for the past 14 years and this past season was the best one yet. Flom directed the Eagles to a 28-0 record, the No. 1 ranking in Minnesota Class 4A, and ESPN’s No. 10 national ranking, but the team did not get the opportunity to play in the state tournament due to the pandemic.

Despite the disappointing end to the season, his players, along with other fans and friends, surprised Flom with a parade Monday night, May 18. Four of Flom’s former players from his years coaching at Gustavus also took part in the parade — John Wippler, Adam TeBrake, Chris TeBrake and Doug Espenson.

During his years as Hanson’s assistant, Flom was a part of back-to-back MIAC regular season and playoff championships.

“He is a loyal Gustie, hard worker, enthusiastic, and he clearly, even at that time, understood the game,” Hanson said. “He is very much a teacher first. I think there are people that go into education so that they can coach, and I think he went into education to be a teacher and wanted to coach. That’s a significant distinction.

“In the time he was here, he was very good at teaching, and I think he enjoyed it. He had a really good grip that he was going to be a better coach if he taught well.”

The three seasons spent at Gustavus propelled Flom to the head boys’ job at Eden Prairie where he’s also served as a fifth-grade teacher since 2006.

“Without any question, my experience that I had at Gustavus with Hans [Mark Hanson] during that time was unbelievably valuable,” Flom said.

Today, the former college student-athlete who saw his playing days come to a close at the end of the Gustie bench now leads from the other end of the bench — as the nation’s best high school coach.