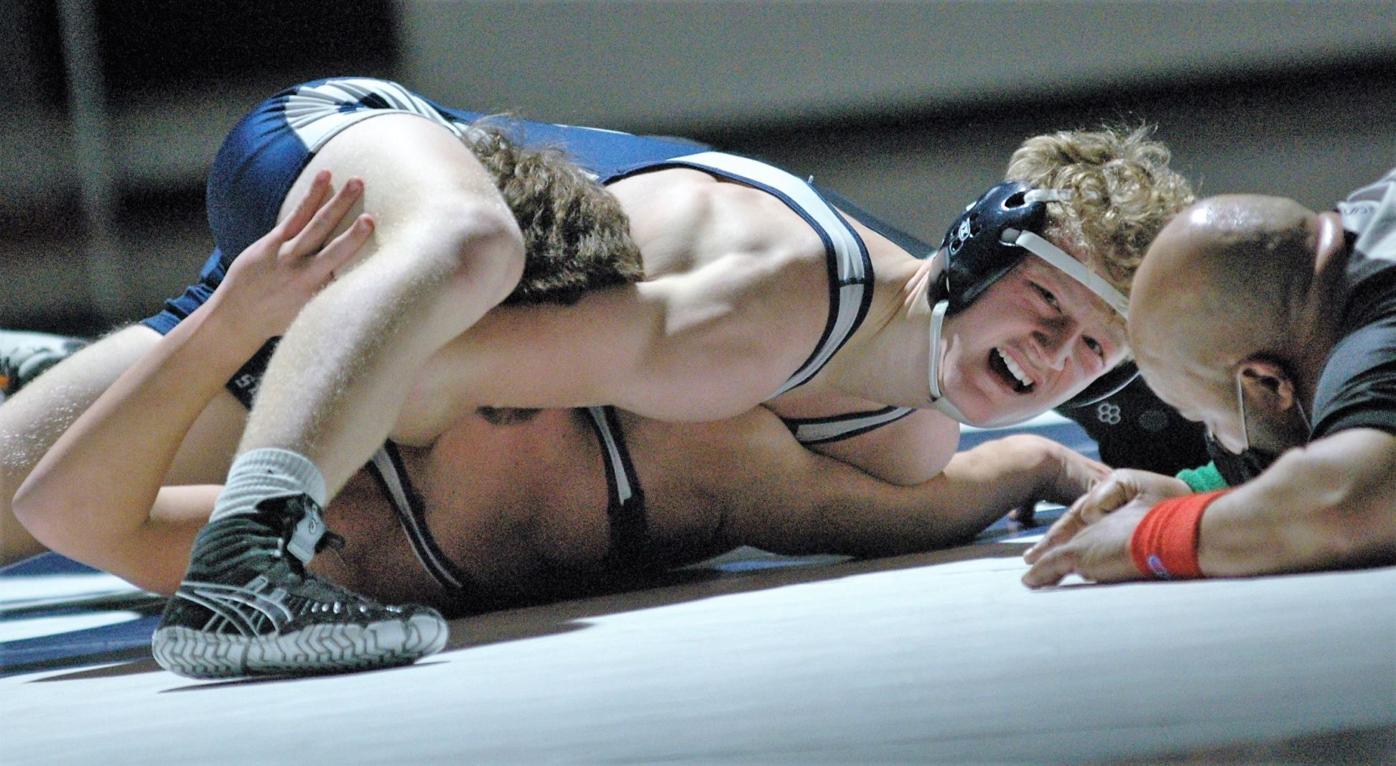 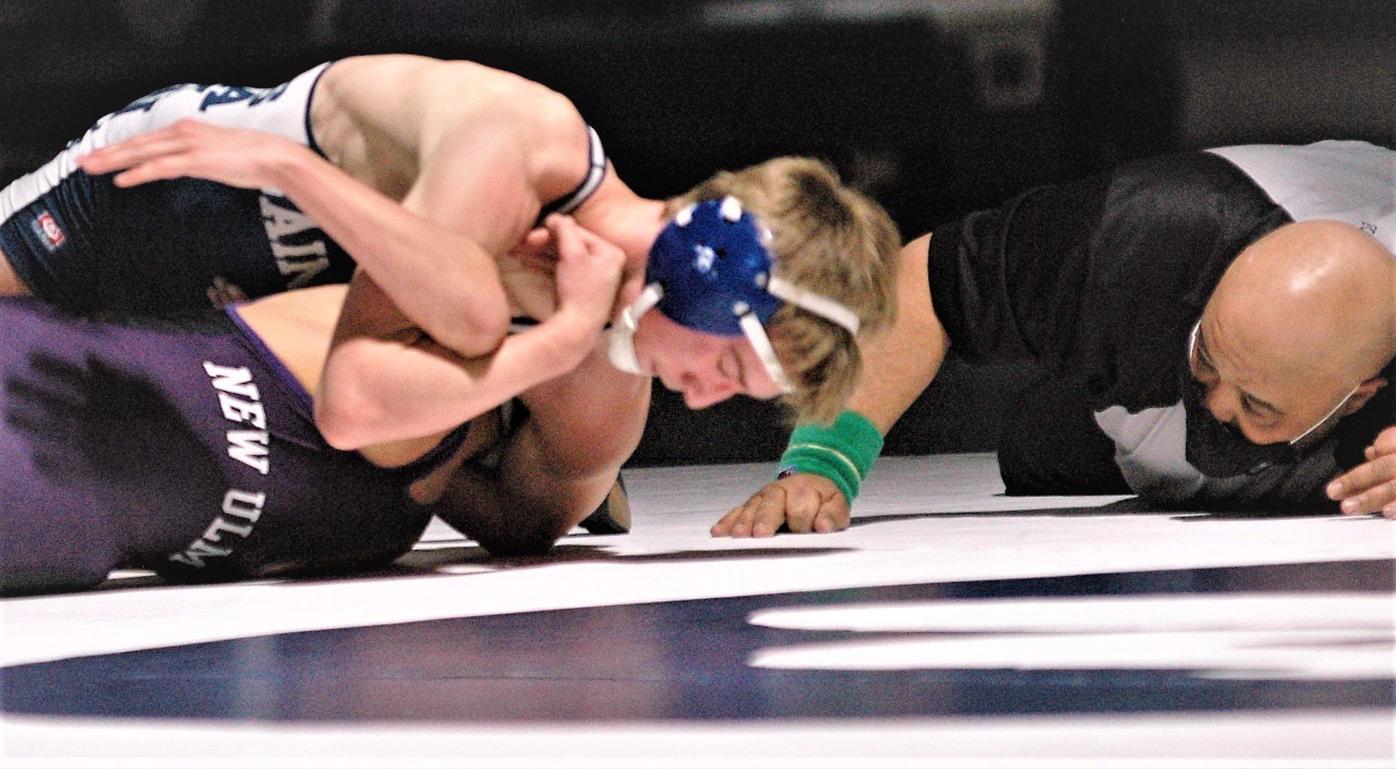 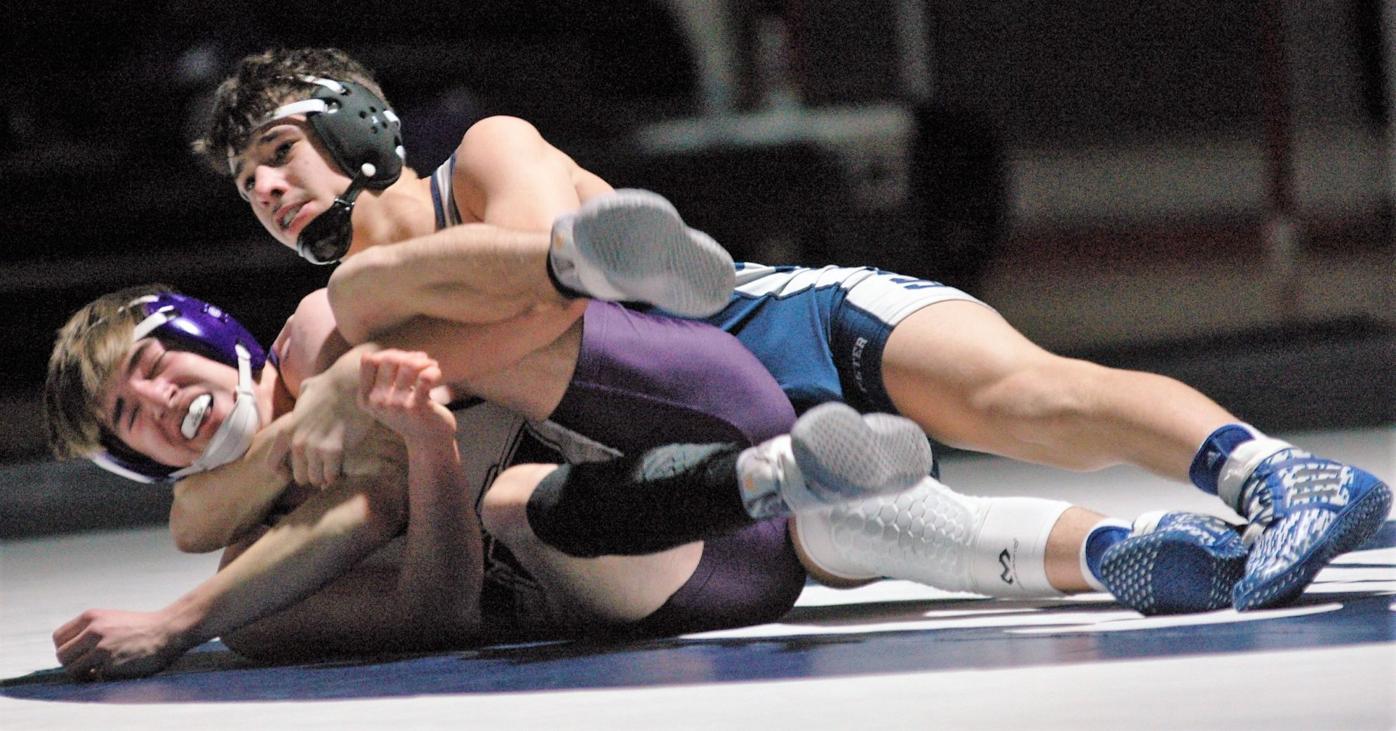 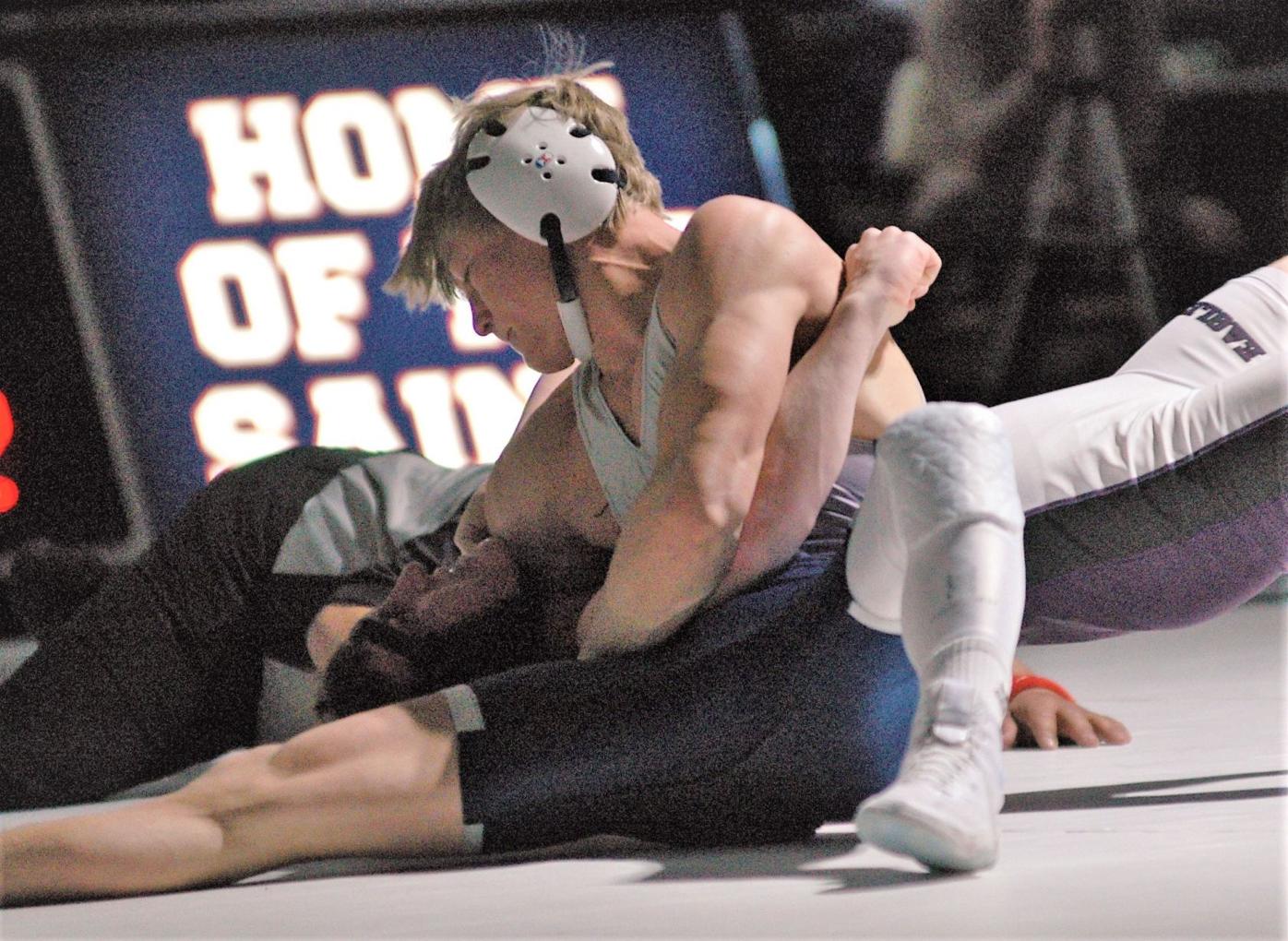 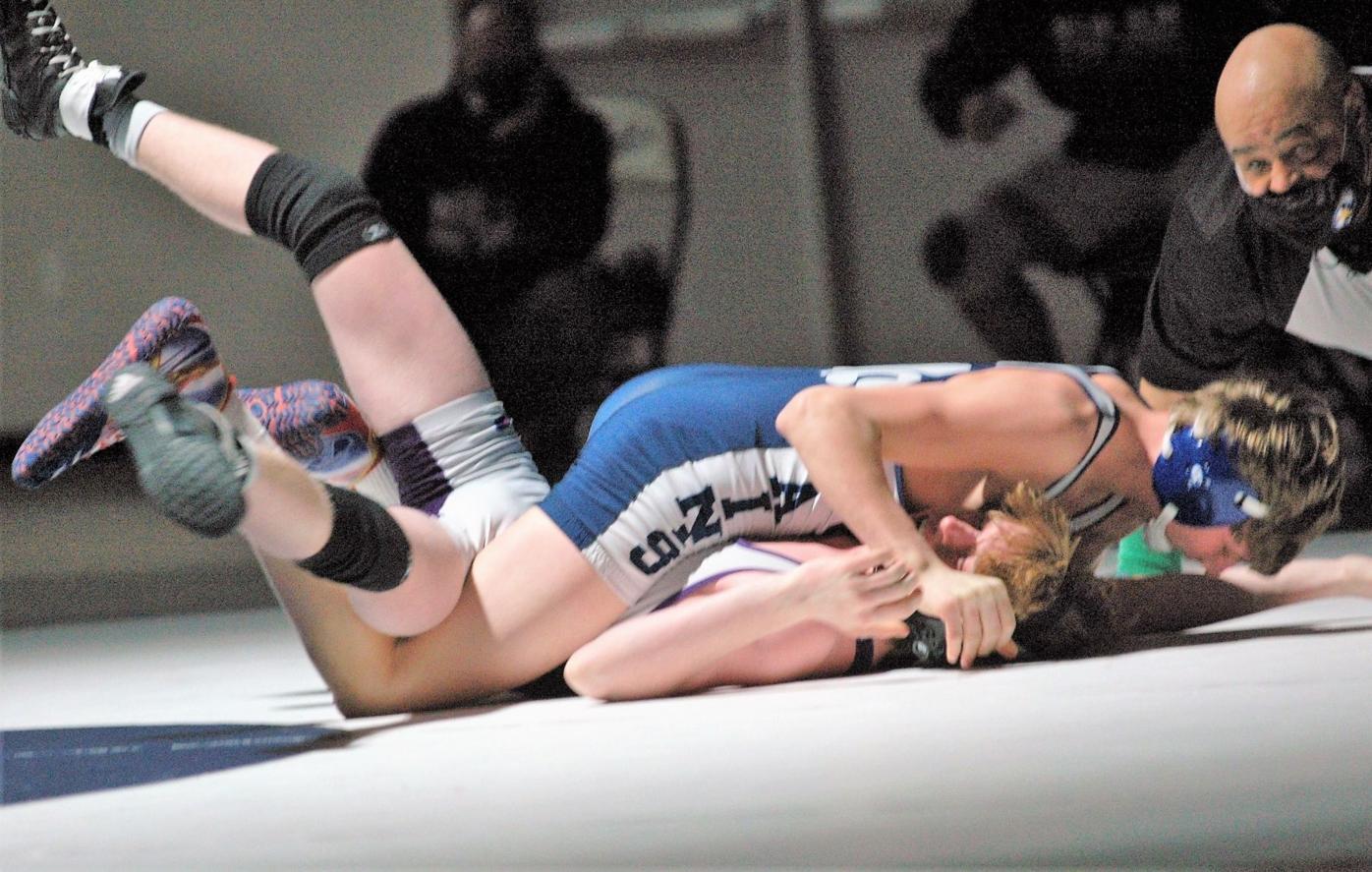 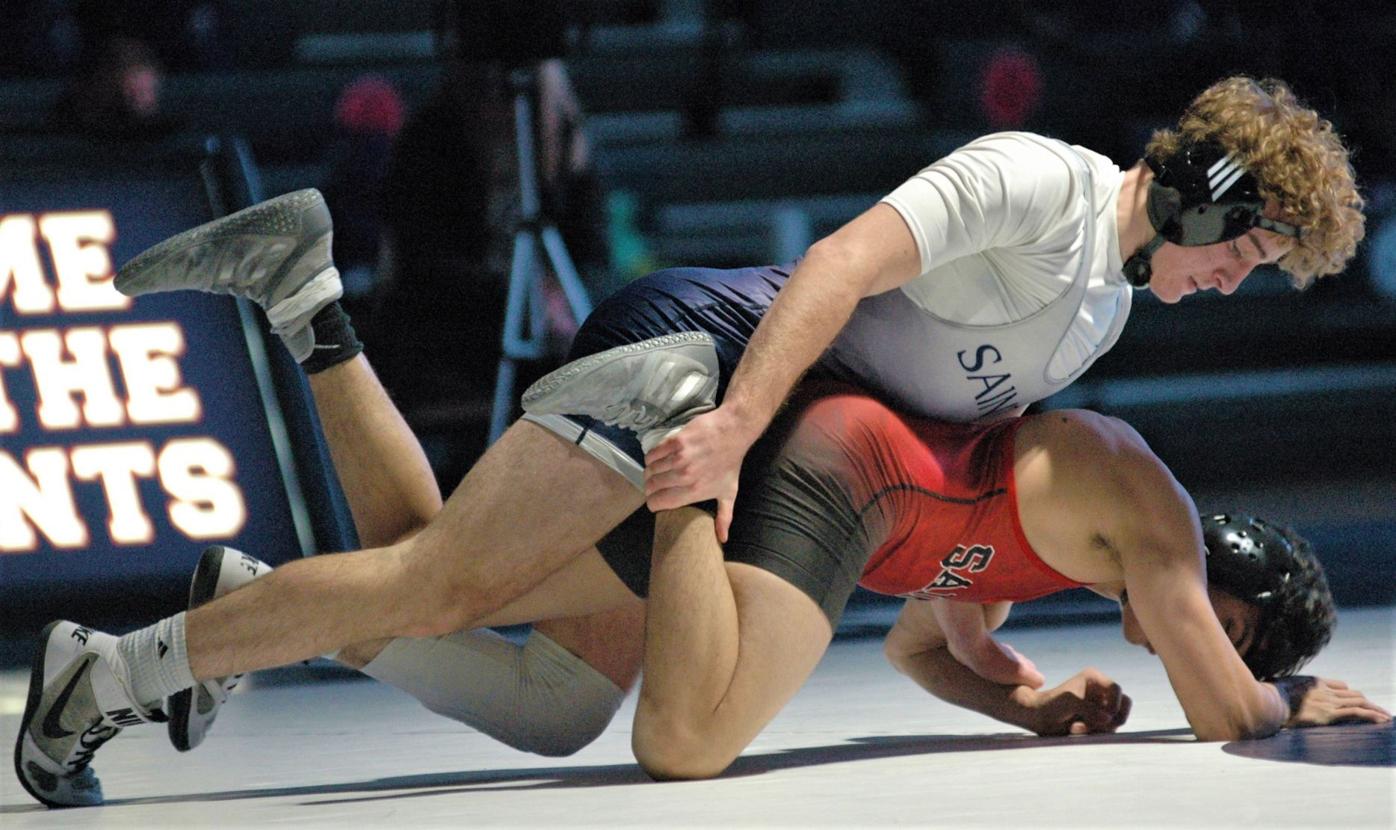 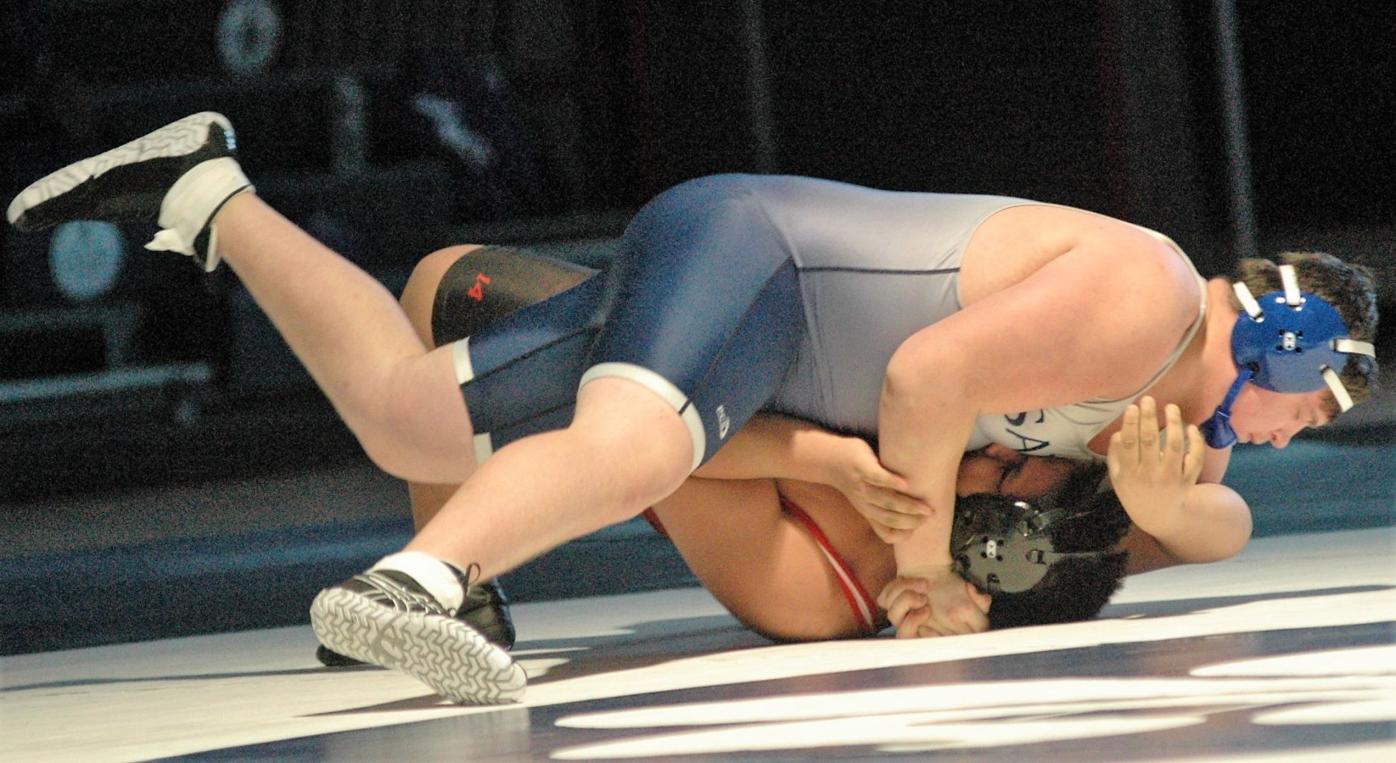 St. Peter senior Nathan Pettis at 285 pounds gets on top of St. James freshman Julio Esqueda in pinning him in 33 seconds. (Pat Beck/southernminn.com)

St. Peter wrestling team earned a reversal against New Ulm on Thursday by avenging a 36-31 loss to the Eagles with a 54-24 home victory.

“We looked good in both matches,” St. Peter co-head coach Keith Hanson said. “St. James is putting a young, inexperienced team on the mat, but their kids keep working hard.

“We got some revenge against New Ulm after they beat us 36-31 in Pipestone a couple of weeks ago. We came out with a little fire in our bellies and turned the tables and a few matches.”

The Eagles actually jumped to a 12-0 lead with two pins over St. Peter after two matches.

But St. Peter eighth-grader Evan Walter at 120 pounds pulled off a third-period pin after trailing 4-3 to cut the Eagles’ lead to 12-6. That started a string of eight straight wins for St. Peter.

“Evan Walter getting a pin at 120 was just the start of good things for us,” Hanson said. “We rolled a bunch of wins in a row and with a forfeit mixed in there we didn’t lose until heavyweight, and that kid is 18-1 now.”

St. Peter senior Noah Hunt won a 13-0 technical fall at 132 to give the Saints a 15-12 lead that they would never relinquish the rest of the way.

“The two freshmen, Cole Filand and Leighton Robb, bumped up weight classes and got two big pins for us,” Hanson said. “Leighton was pinned by the New Ulm guy last time.”

The Saints were scheduled to host a nonconference triangular with the Waterville-Elysian-Morristown/Janesville Waldorf Pemberton Grizzlies (2-7) and the Zumbrota Mazeppa Cougars (8-3) at 10 a.m. Saturday, Feb. 20. However, WEM/JWP backed out. More St. Peter spectators will be allowed than normal for parents’ day. Instead of two fans per St. Peter wrestler, four per wrestler will be allowed.