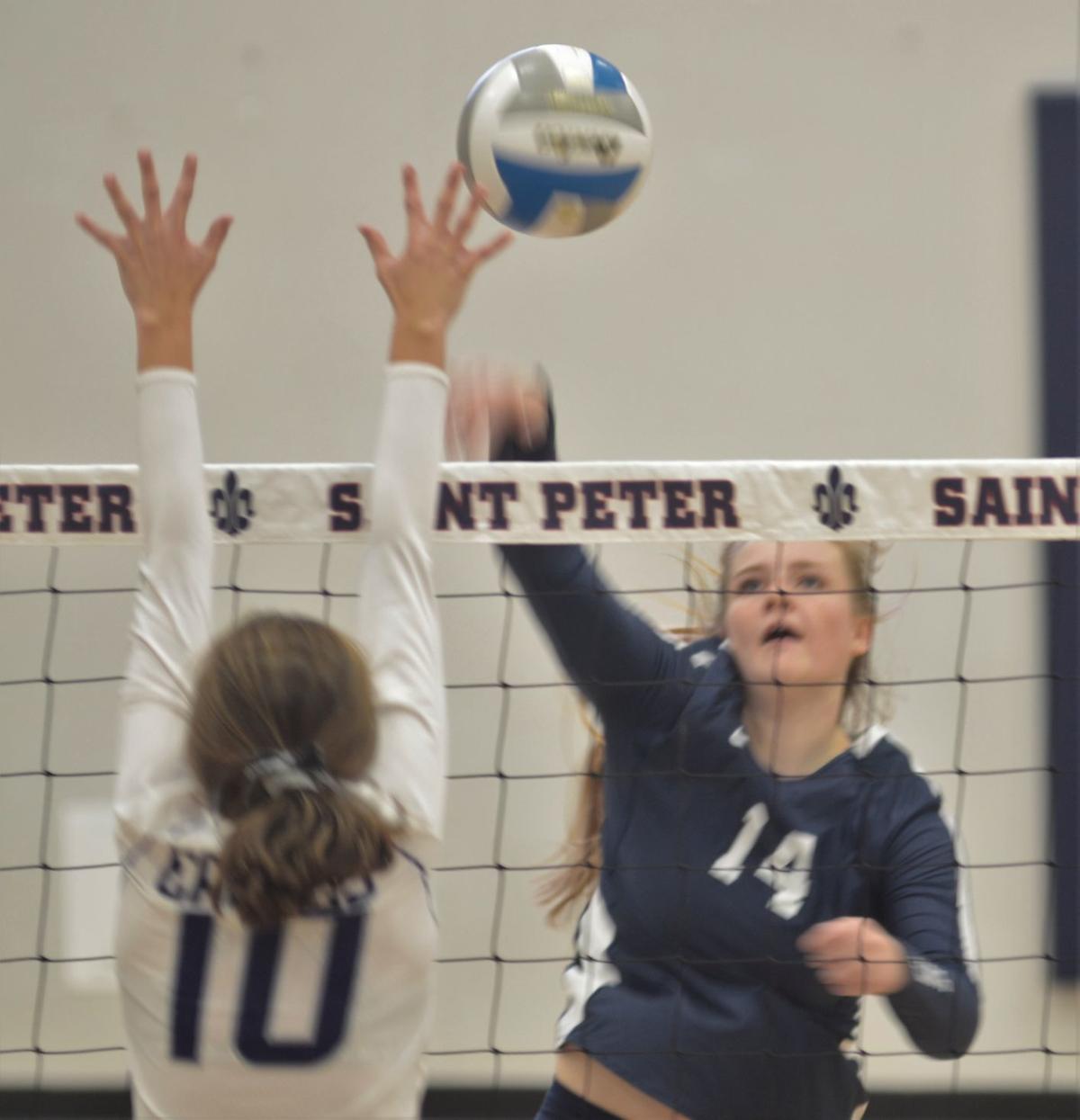 Sarah Conlon hits one of her team-high 20 kills in a tough 3-2 loss to New Ulm on Tuesday. (Dana Melius/St. Peter Herald) 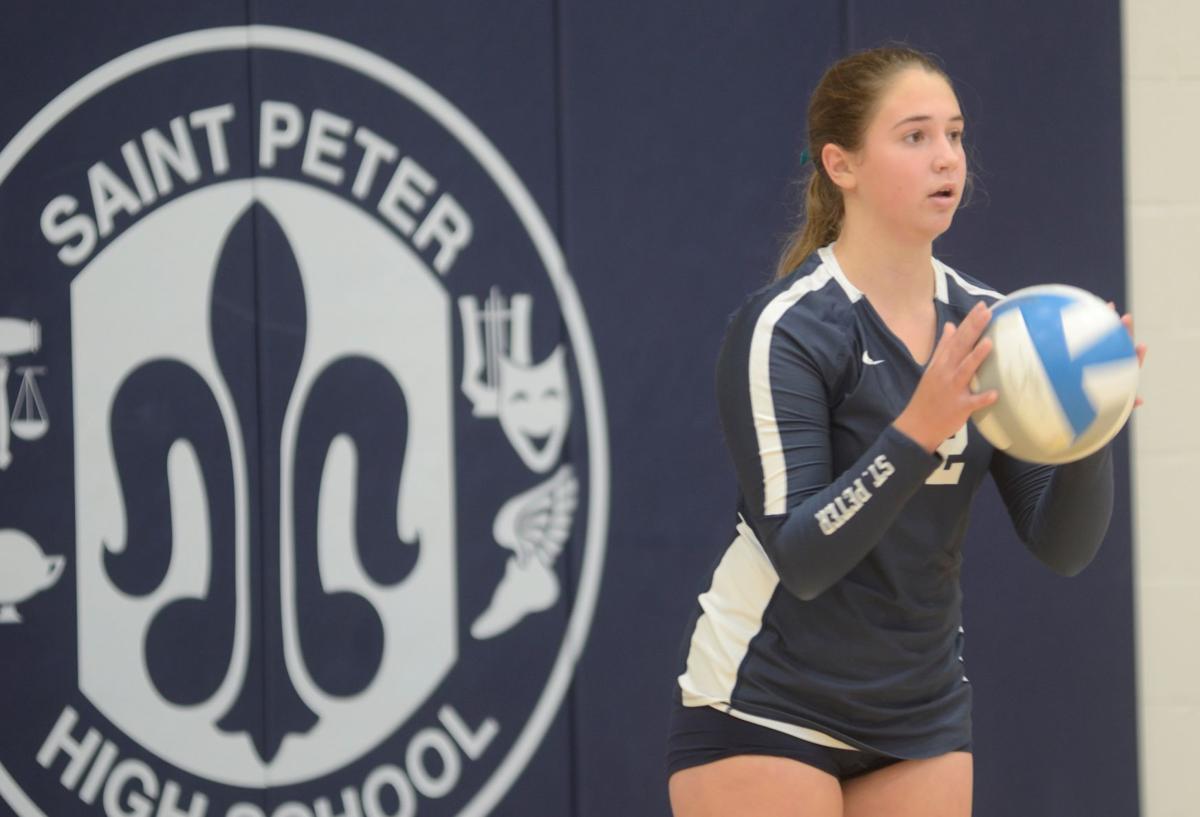 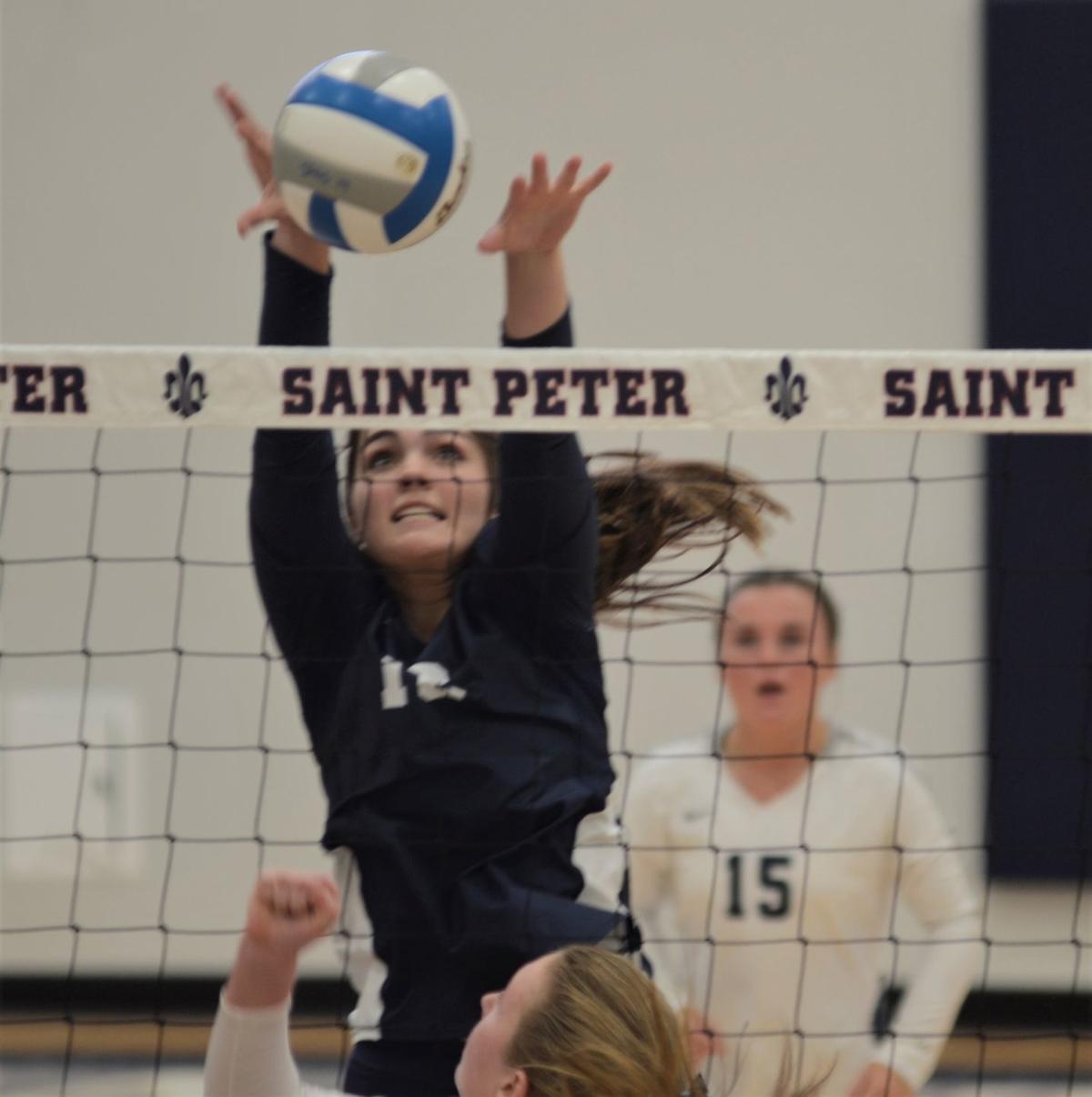 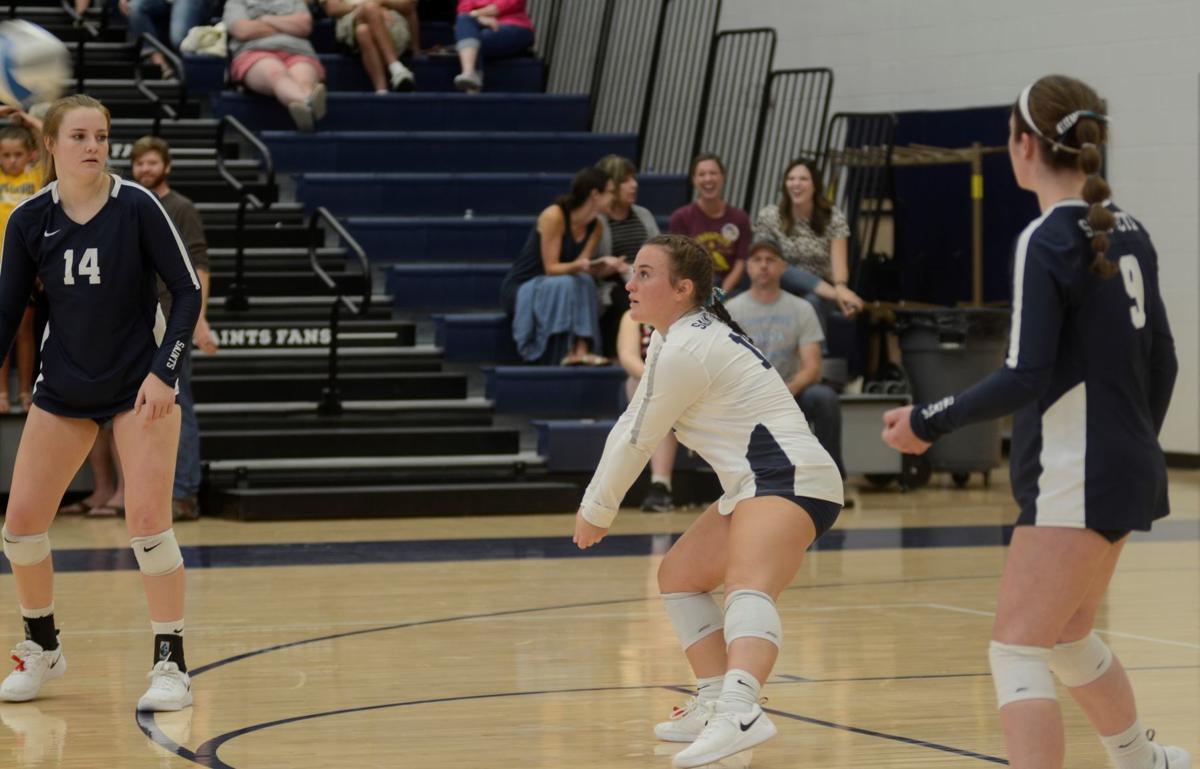 Sarah Conlon hits one of her team-high 20 kills in a tough 3-2 loss to New Ulm on Tuesday. (Dana Melius/St. Peter Herald)

It was also a big conference loss, as both teams came into the match unbeaten in Big South Conference competition. The loss dropped St. Peter’s conference mark to 3-1, 3-4 overall. New Ulm improved to 3-0 in league play, 3-2 overall.

The Saints cruised through set one 25-9, thanks in large part to 13 consecutive service points by sophomore Grace Remmert to close it out. Remmert finished with 25 service points in the five-game match.

It was a closer set two, but the Saints methodically moved out to leads of 7-2 and on to a 15-8 edge before an Eagles timeout. New Ulm closed that gap to within two at 16-14. But from there, Saints senior Sarah Conlon took over with her front-line teammates. Conlon’s sixth kill of the early evening was followed by winners from Maggi Pierret, Lizzy Quist and Brielle Bushaw and forced another New Ulm timeout at 20-15.

The Eagles kept the gap at 5 up to 22-17, but eventually a Remmert service point, a Bushaw block, and a New Ulm defensive error gave set two to the Saints at 25-18.

Momentum seemed to shift New Ulm’s way after a Cancer Night fundraiser delayed action between sets two and three. Service woes by the Saints kept St. Peter from going on any large rallies in set three. Down 15-10, a St. Peter timeout seemed to ignite the Saints. After a Quist kill and two Remmert service points, the Saints tied it up at 16-16.

But the Saints would never lead. New Ulm, leading by two at 20-18, closed out set three with five straight points to force a fourth.

It was much of the same throughout set four between the Saints and the Eagles. St. Peter held early leads of 5-3 and 8-6, but service miscues kept the Saints from any extended rallies. And after a Conlon block closed the New Ulm lead to 11-10, the Eagles never looked back en route to a 25-22 set four win.

In the set five decider to 15, it was back and forth much of the way. New Ulm took an early 3-1 lead, the biggest of the finale. But St. Peter eventually moved into the lead at 9-8 and the Saints held their largest lead at 12-10. When the Eagles tied things up two points later, a St. Peter timeout followed. And after another Bushaw kill, it would be the Saints last lead. New Ulm closed it on a kill, a 15-13 set five win, and match victory.