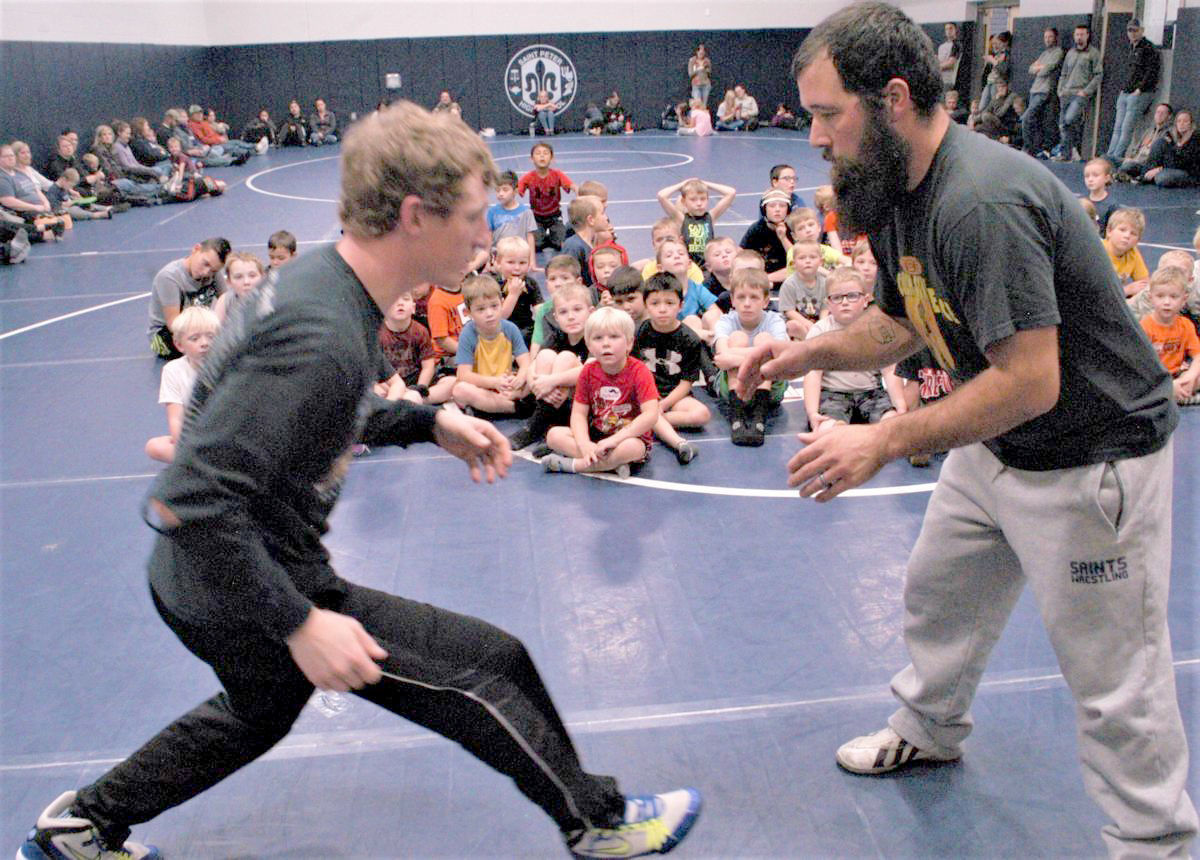 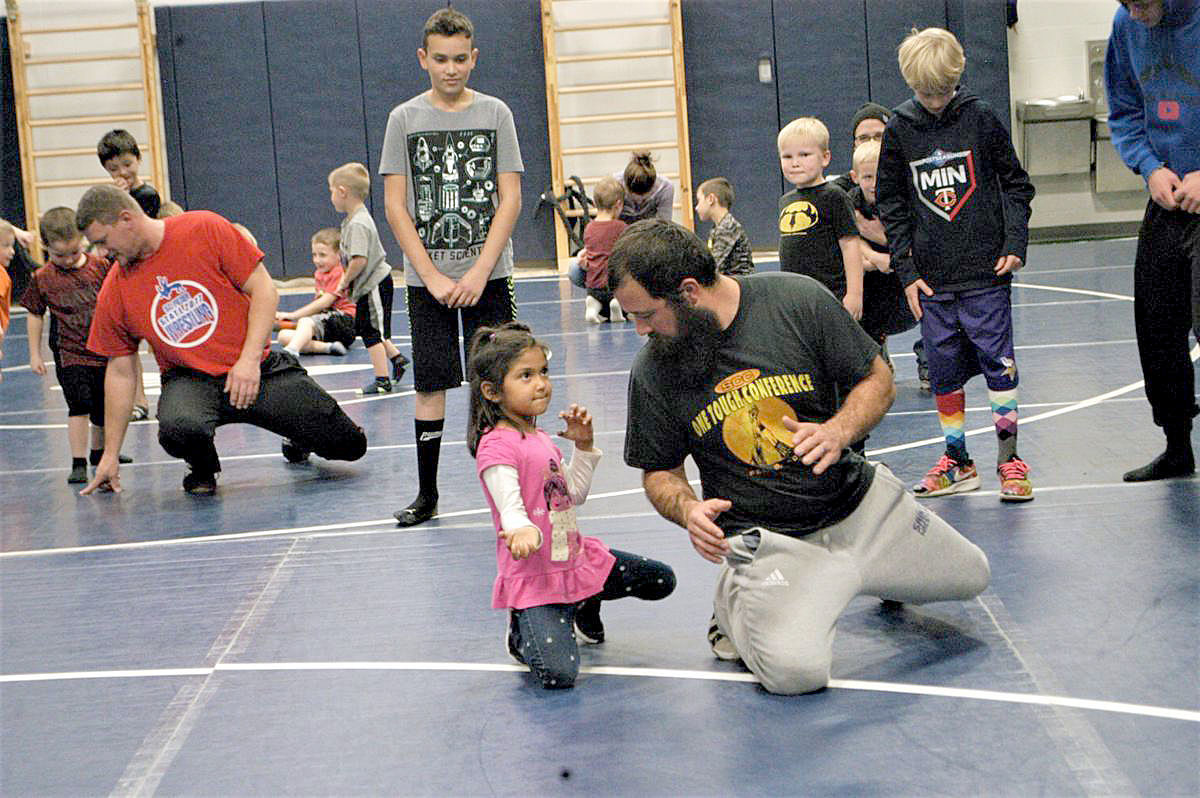 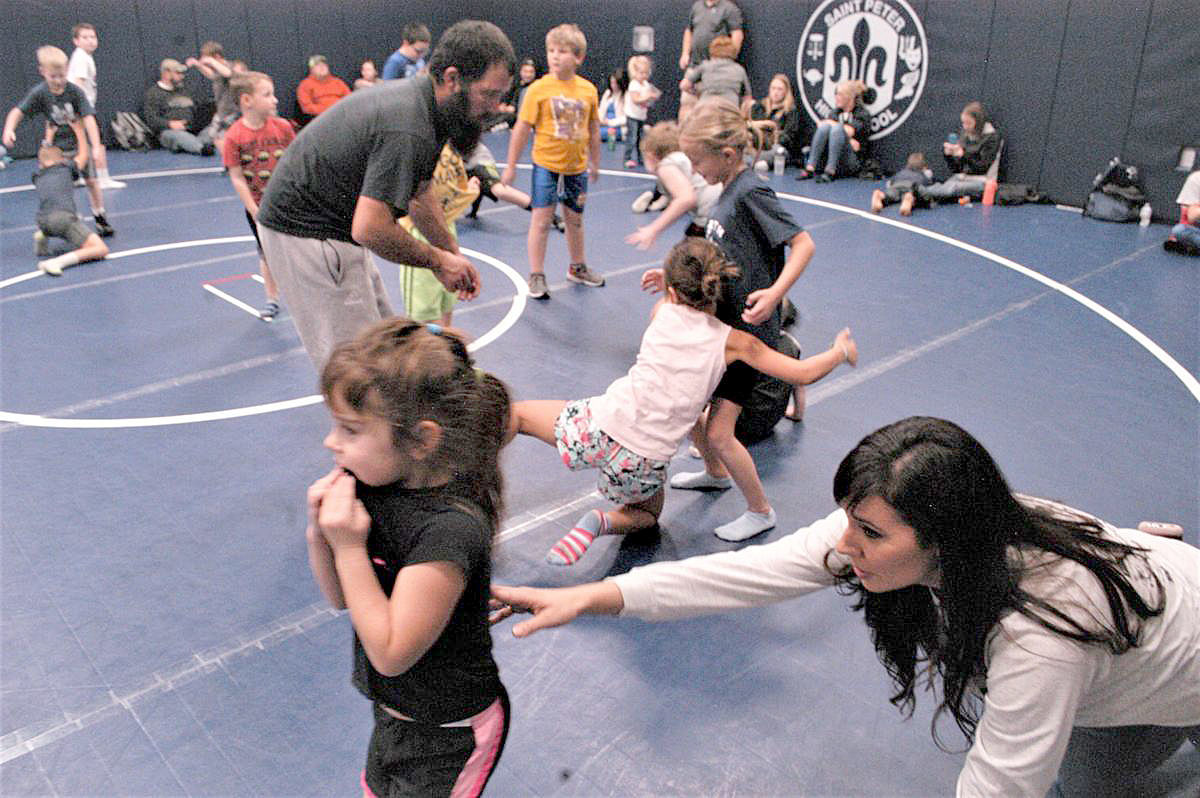 Whitney Buzick urges her reluctant daughter to get in on the action in her first time wrestling Monday. (Pat Beck/St. Peter Herald) 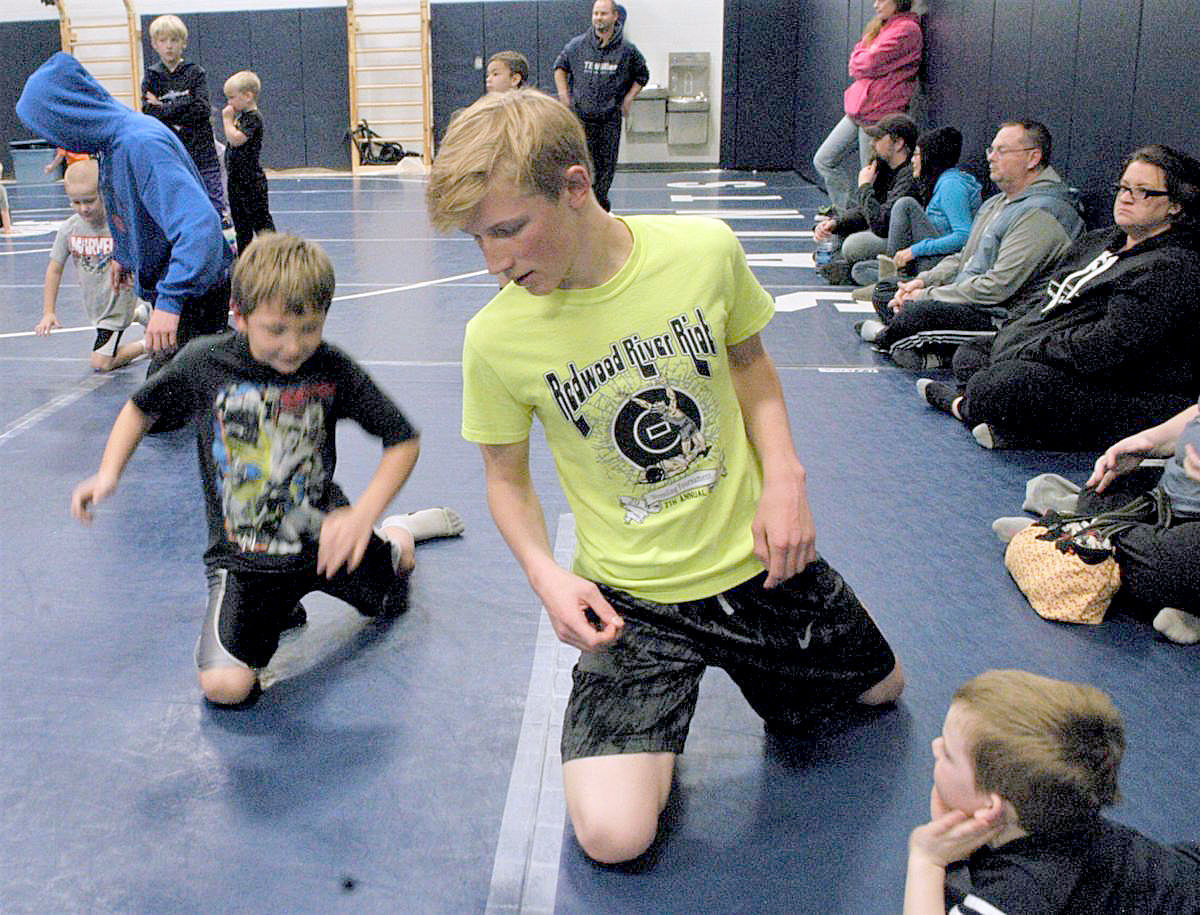 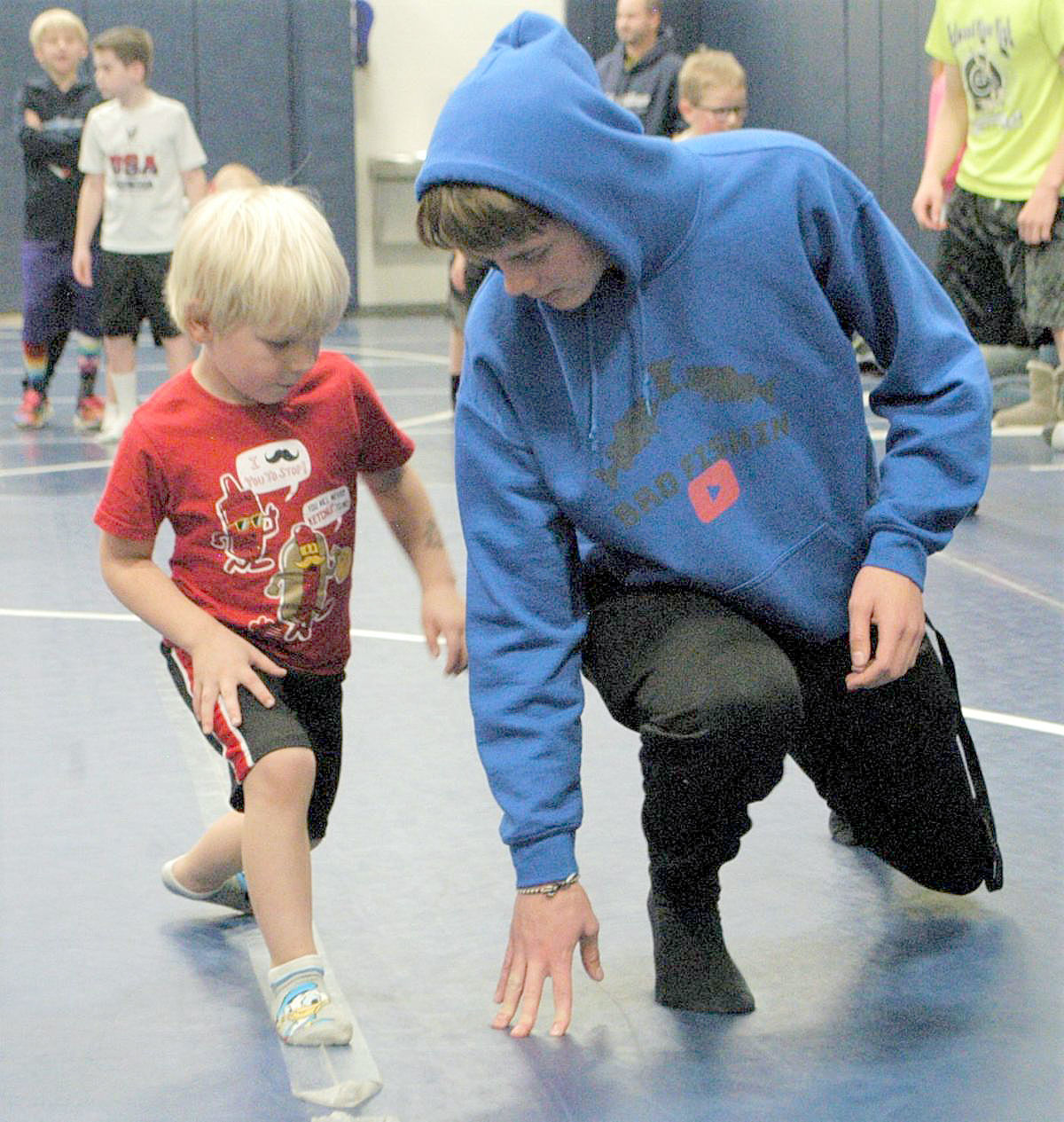 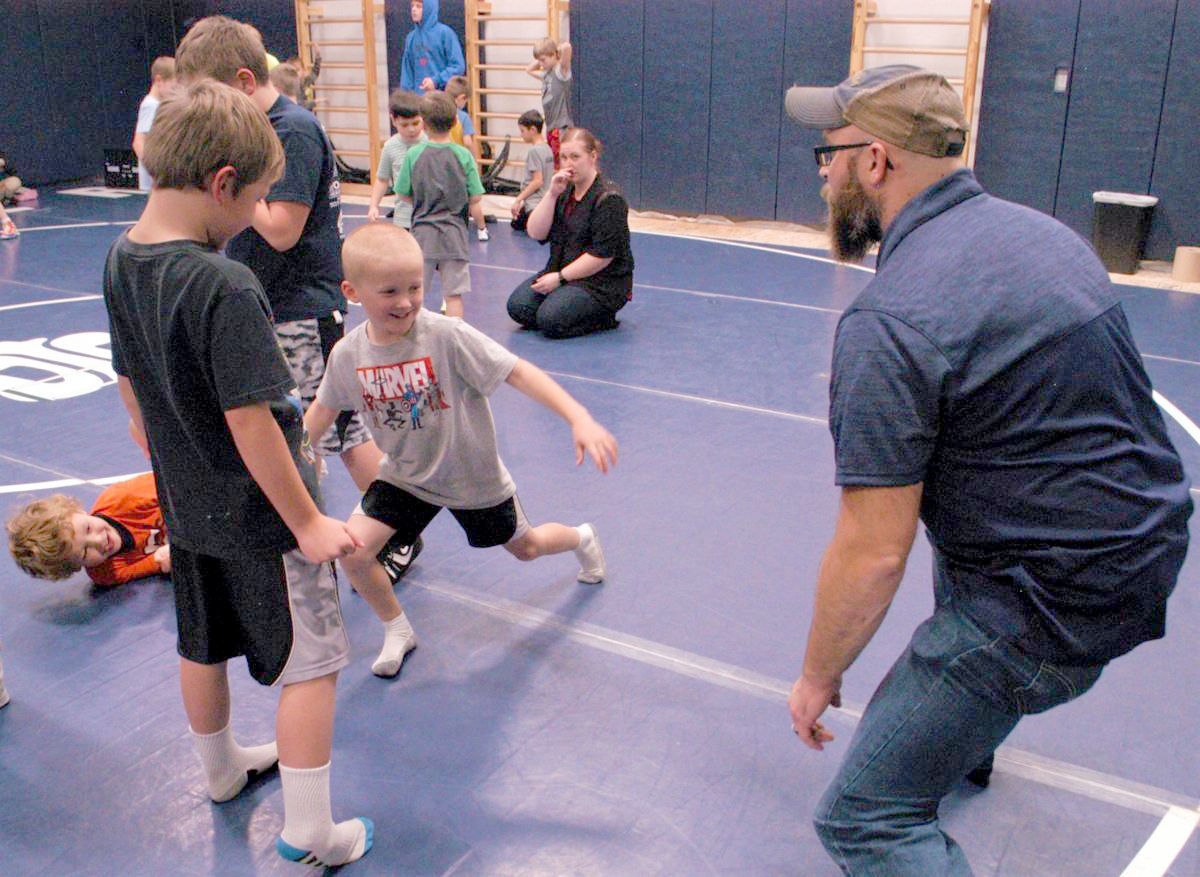 Whitney Buzick urges her reluctant daughter to get in on the action in her first time wrestling Monday. (Pat Beck/St. Peter Herald)

They don’t know if they will continue on in the sport, but preschoolers through sixth-graders got a chance to try wrestling for free.

This year, 22 newcomers joined the club, bringing the membership to 56.

The week not only offered first-time wrestlers a chance to try the sport, it also allowed returning wrestlers an opportunity to sharpen up their basic skills.

Sixty-seven kids, with their parents watching their children’s reactions, squeezed into the St. Peter Wrestling Room in the first night on Monday.

“It’s a lot of kids in one room,” Sinclair said, watching the 67 kids on Monday. “But I think it’s a good thing that the coaches put on to get people interested and excited in it.

“It’s his first attempt at a sport. He wanted to try it. He heard about it from other kids and a flyer at school.”

Sinclair, who also played soccer in high school, said he likes the individuality of wrestling.

Sinclair also has a 4-year-old girl and a 1-year-old boy. “She likes to wrestle, but she also likes dance,” he said of his daughter.

“We’re trying to put him in all the sports to try to see what he’s most interested in,” she said. “He loves baseball and soccer.”

Erickson also has 10- and 12-year-olds who are not in wrestling.

“Both tried it when they were younger, but they didn’t care for it,” Erickson said. “I like that it’s free, so you’re not paying money in case he doesn’t end up liking it. It’s more geared toward younger kids that are new to the sport. More kids his size to team up with.”

Scott Rohlfing of Norseland brought his son Jack, 6, of South Elementary to try his first sport.

“He’s interested in it,” Rohlfing said. “I wrestled when I was a kid. It’s fun. It grows their personality and teaches them to be calm, think before they act and keep their head. There’s a lot of kids. I’m surprised at the turnout.”

An average of 55 kids from age 3 and up showed up each night during week.

Whitney Buzick of Mankato brought her two daughters, 4-year-old twins Hayden and Chaitin, and son, Colton, 5, to try wrestling for the first time.

“They’re really into wrestling because dad wrestles,” Buszick said. “They wrestle every night. The girls are really excited about it.”

Her husband, Tim Buzick of Mankato, said, “It’s awesome that they put it on for free, and that’s it’s open to area communities. It’s cool that St. Peter’s putting it on for kids to try it to see if they even are interested. And it’s good to get more kids involved. It’s a good introduction to get them used to the sport.

“Wrestling teaches self discipline. You’re the only one out there, so you’re responsible for everything that happens. I loved it as a kid, so my kids like it, too. It’s a lot of hard work, but it’s worth it.”

Practice starts with a warm-up run in a circle around the mat. Then they learn the stance or starting position, followed by the penetration step and the take down preparation. At the end, they play a game called sharks versus minnows.

Not only boys participated. A few girls showed up.

“Girls interest is growing,” Anderberg said. “A high school team in Oklahoma has an all-girls program. It’s definitely growing for girls. Girls do well younger. But when boys gain upper body strength, they can dominate girls.

“Wrestling teaches hard work and discipline. You’re out there on the mat by yourself. You have to watch your weight. You learn a lot about yourself. It’s something that can help you in life.

He asked the kids: “Who wants to be better at football? Stay out for wrestling. It will 100 percent improve your football game. In my sixth-grade team, my best tacklers were all football players, and they were the three smallest kids on the team.”

For more information, contact Guth at 507-351-5630 or email him at brad.guth@saintpeteryouthwrestling.com