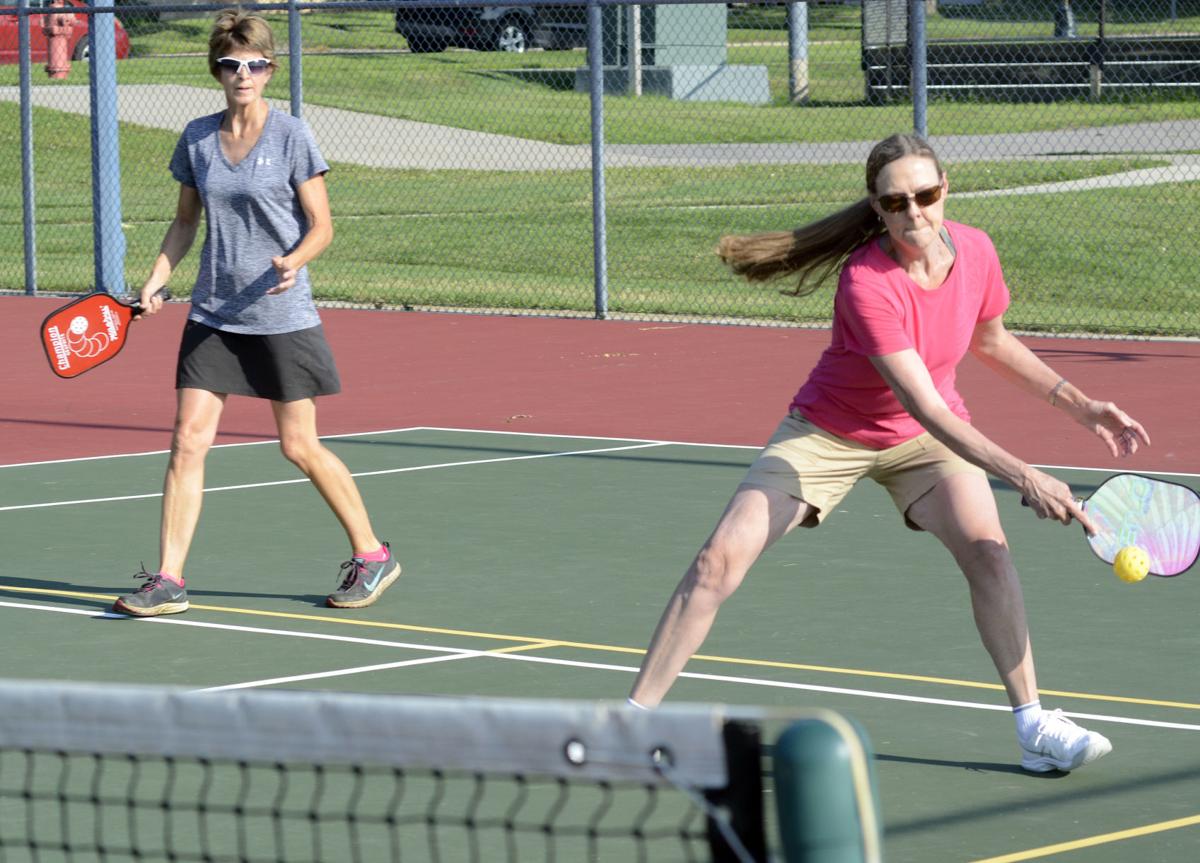 Marilyn Frederick (right) and Mary Natwick team up in doubles on the pickleball/tennis courts last year at Veterans Park in St. Peter. The yellow lines are for pickleball and the white lines are for tennis. (Pat Beck/St. Peter Herald) 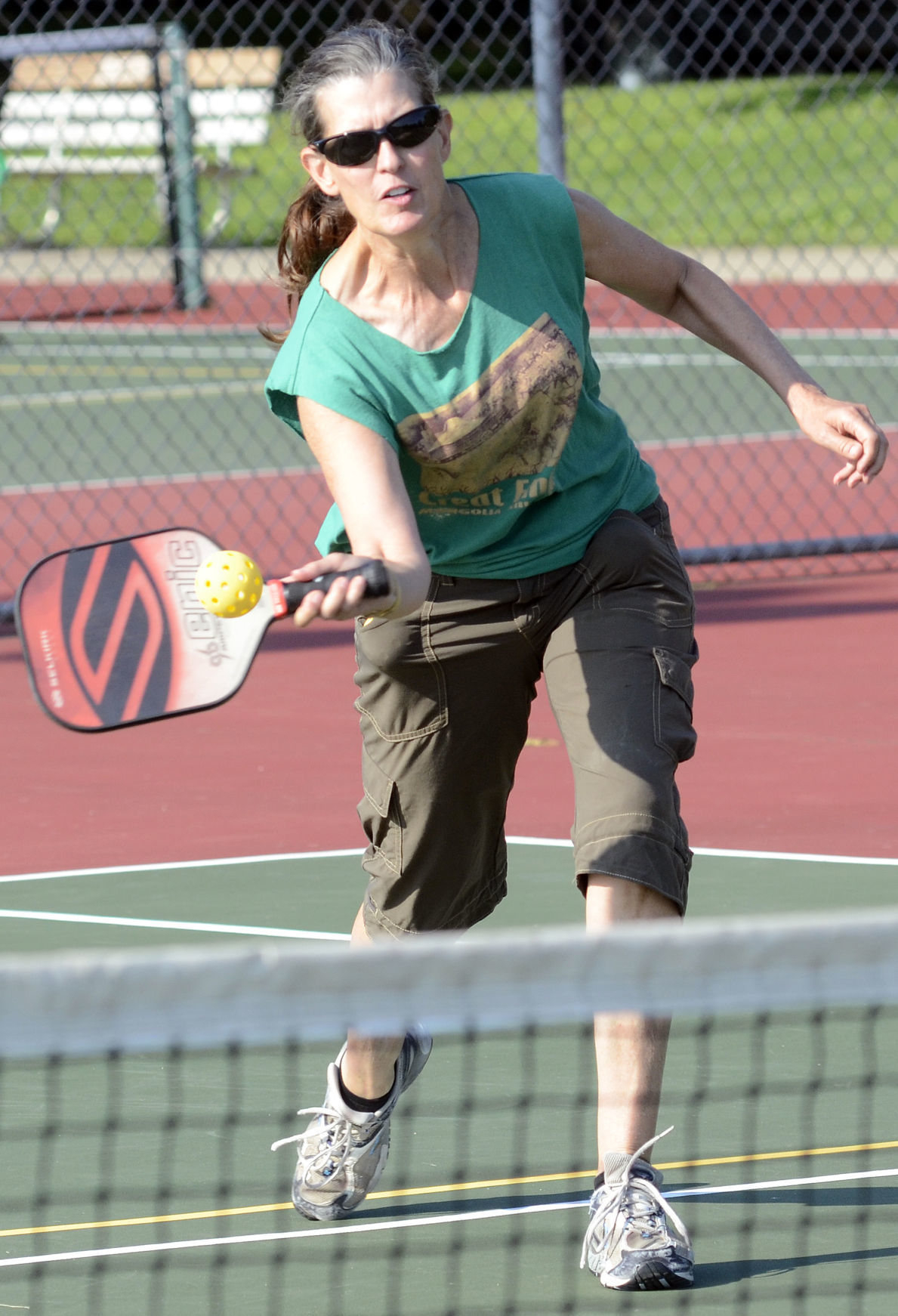 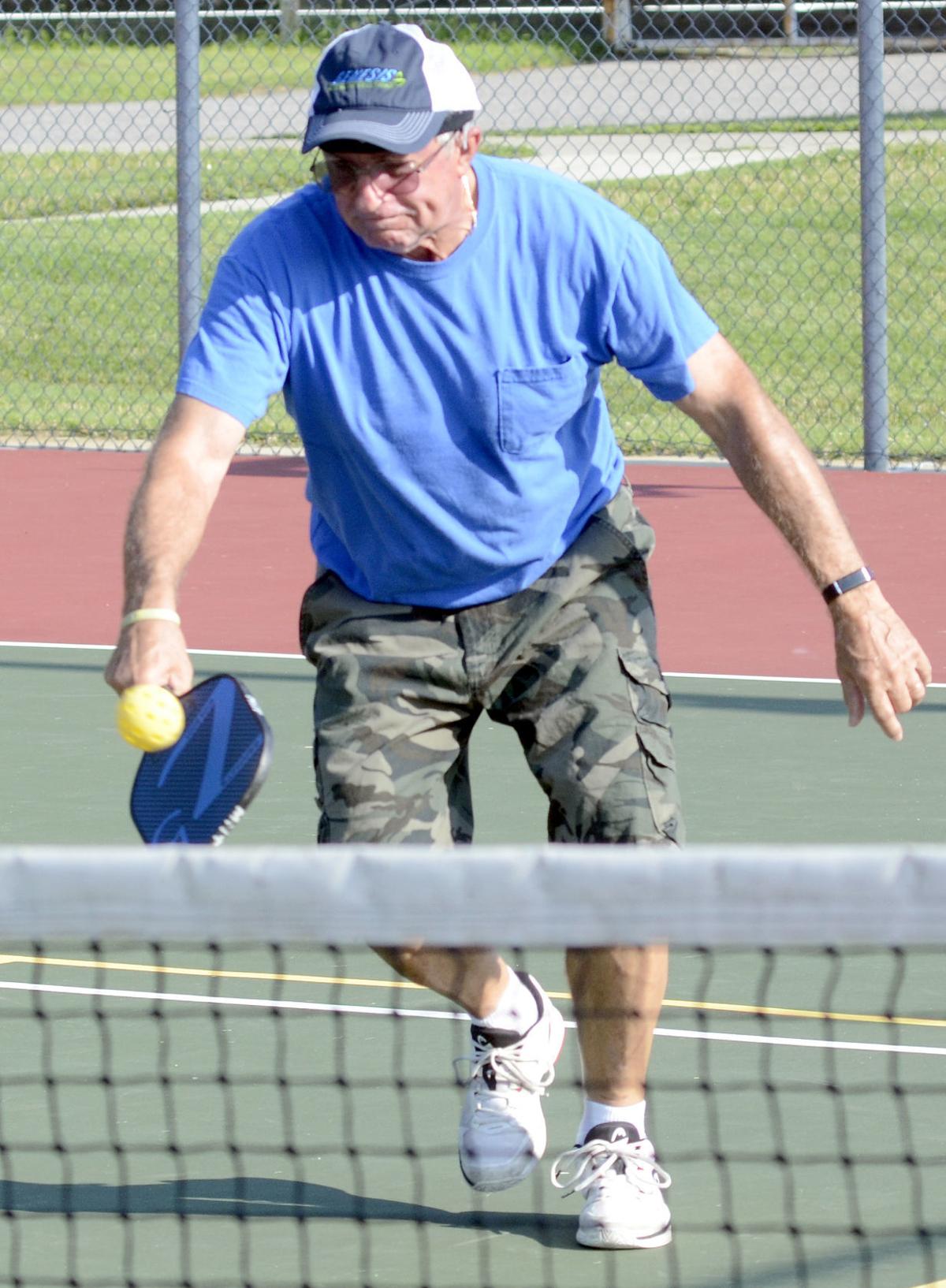 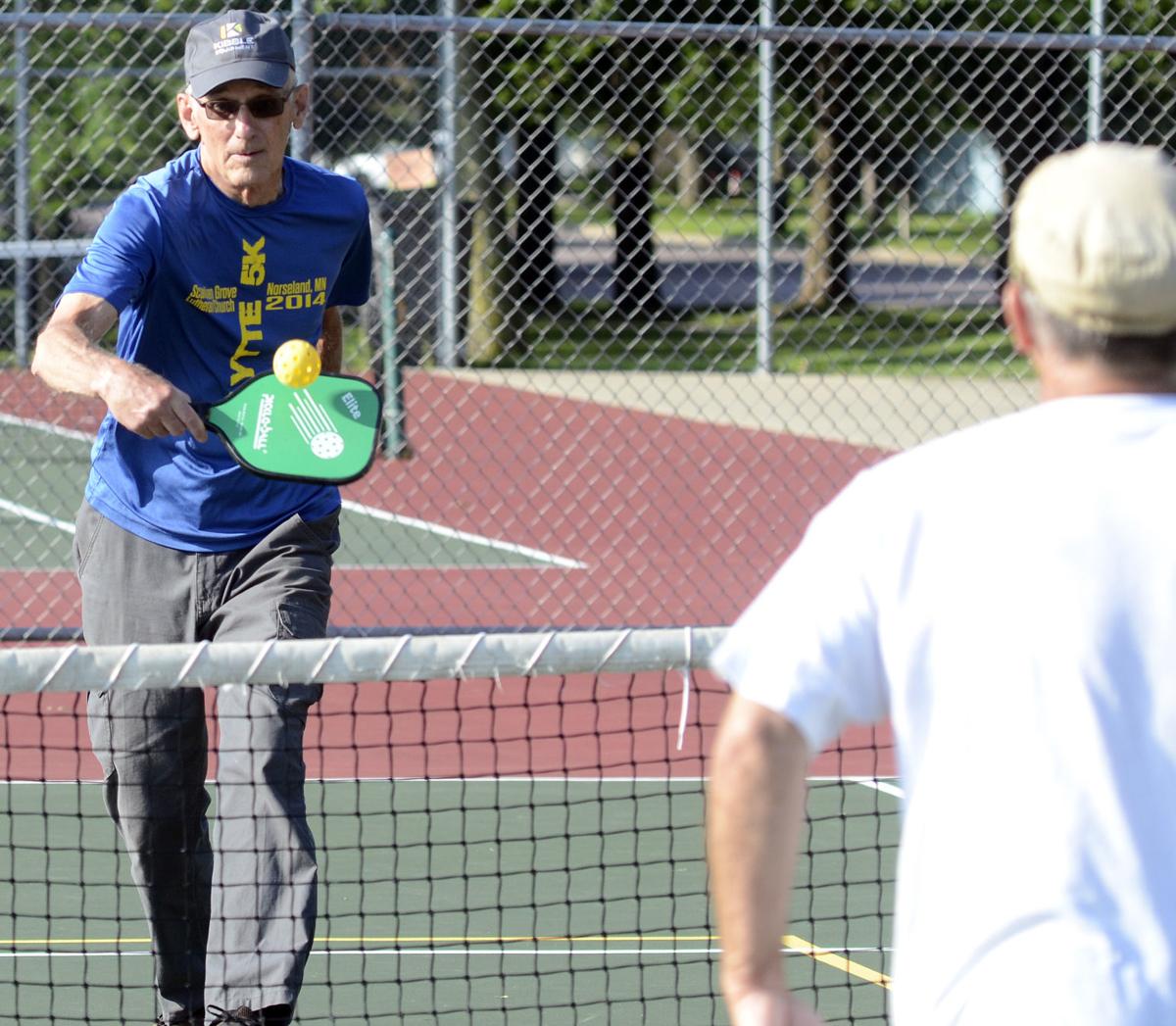 Charles Johnson, 74, of Norseland moves in for a backhand in the St. Peter pickleball league Tuesdays and Thursdays at Veterans Park. 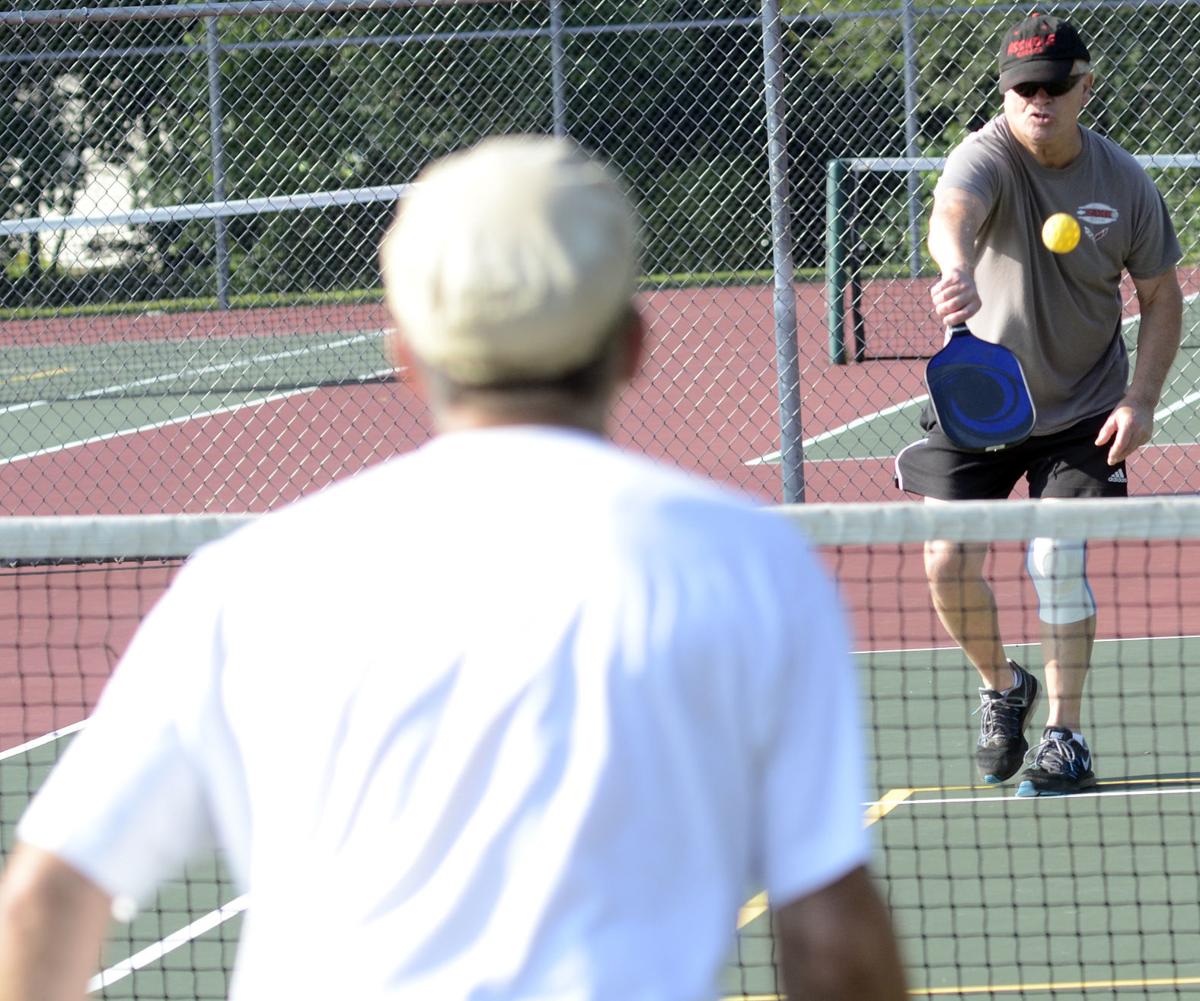 Marilyn Frederick (right) and Mary Natwick team up in doubles on the pickleball/tennis courts last year at Veterans Park in St. Peter. The yellow lines are for pickleball and the white lines are for tennis. (Pat Beck/St. Peter Herald)

Charles Johnson, 74, of Norseland moves in for a backhand in the St. Peter pickleball league Tuesdays and Thursdays at Veterans Park.

There are all sorts of reasons for playing pickleball, and it’s one of the fastest growing sports.

It’s a good exercise for anyone, but it’s especially nice for seniors who might be slowing down and have a hard time getting around a tennis court.

The pickleball court is about half the size of a tennis court, which means less ground to cover. And most of the time doubles is preferred in pickleball which reduces the amount of court to cover.

The pickle ball, which is a wiffle ball, can’t be hit as hard as a tennis ball. The paddle is smaller than a tennis racket and bigger than a ping pong racket.

It’s like one big party with players joking around with each other after nearly every point.

Patricia Koch, 55, of St. Peter, started playing inside last year and plays outside this summer.

“I love this pickleball group in St. Peter because it’s great exercise and everybody has the attitude that we’re going to have fun,” Koch said. “You will hear so much laughter. We laugh at ourselves and at each other all the time. So it’s very social. Sometimes we have some youngsters come in their 20s. Then we have the grandkids that play sometimes.”

Playing doubles, they switch partners and opponents every game to get to know each other.

“It doesn’t matter your level,” Koch said. “We’re all very accommodating whether you’re a beginner or advanced. But we’ve got some real good players. We welcome beginners. I would love to see where they have their own court. Most of us started a year and half to two years ago.”

Dave Skramstad, 68, St. Peter, expanded his number of friends by playing pickleball since last May.

“I only knew two or three of these people when I started, and now I know them all,” he said. “The exercise and the camaraderie are the two biggest things and the sport itself. I never used to play tennis, but I played ping pong. It’s a lot like ping pong. It’s like playing ping pong on a tennis court. It’s a lot of fun.”

Pickleball players love the sport so much they go through pain to play.

The oldest St. Peter pickleball player, Ron Doty, 76, of Lake Washington in Kasota Township, had double knee replacement, and she’s so addicted to pickleball that he got back playing seven weeks later.

Skramstad just got a knee brace to keep playing pickleball, and it’s relieved his pain. “I couldn’t walk for a day and half.”

Milt Deutsch, 73, of Le Center, started playing pickleball six years ago in Arizona in the winter. He is in his first year playing in St. Peter.

“It’s an active sport that if you can walk, you can play,” Milt said. “That’s better than sitting in front of the TV. They’re all friendly and call you by name. It doesn’t make any difference if you win or lose.

Pickleball players are classified by their ability from 1.5 to 5.0. Milt is a 2.5, an intermediate player.

Charles Johnson, 74, of Norseland, in his third year playing, also thinks its a fun way to exercise. He is a semiretired farmer.

“It gets you out and moving,” Johnson said. “It’s really great, a fun bunch. Most of us have played together for the last couple of years. I’m in pretty good shape, not too many aches and pains.

“Retirement is OK, but that gets old, too, when you’re not doing anything. But that’s why I play pickleball. It gives you something to do.

“It’s a smaller court than tennis, so you don’t have to run as much. You can make it pretty hard work if you play hard enough. Sometimes you get a really long rally. It’s a long game out in the sun.”

The morning outdoor league started out three years ago with a half dozen people. Now it’s grown to 28, with more welcome to expand the number of days people can play.

Has two outdoor courts at the hockey rink