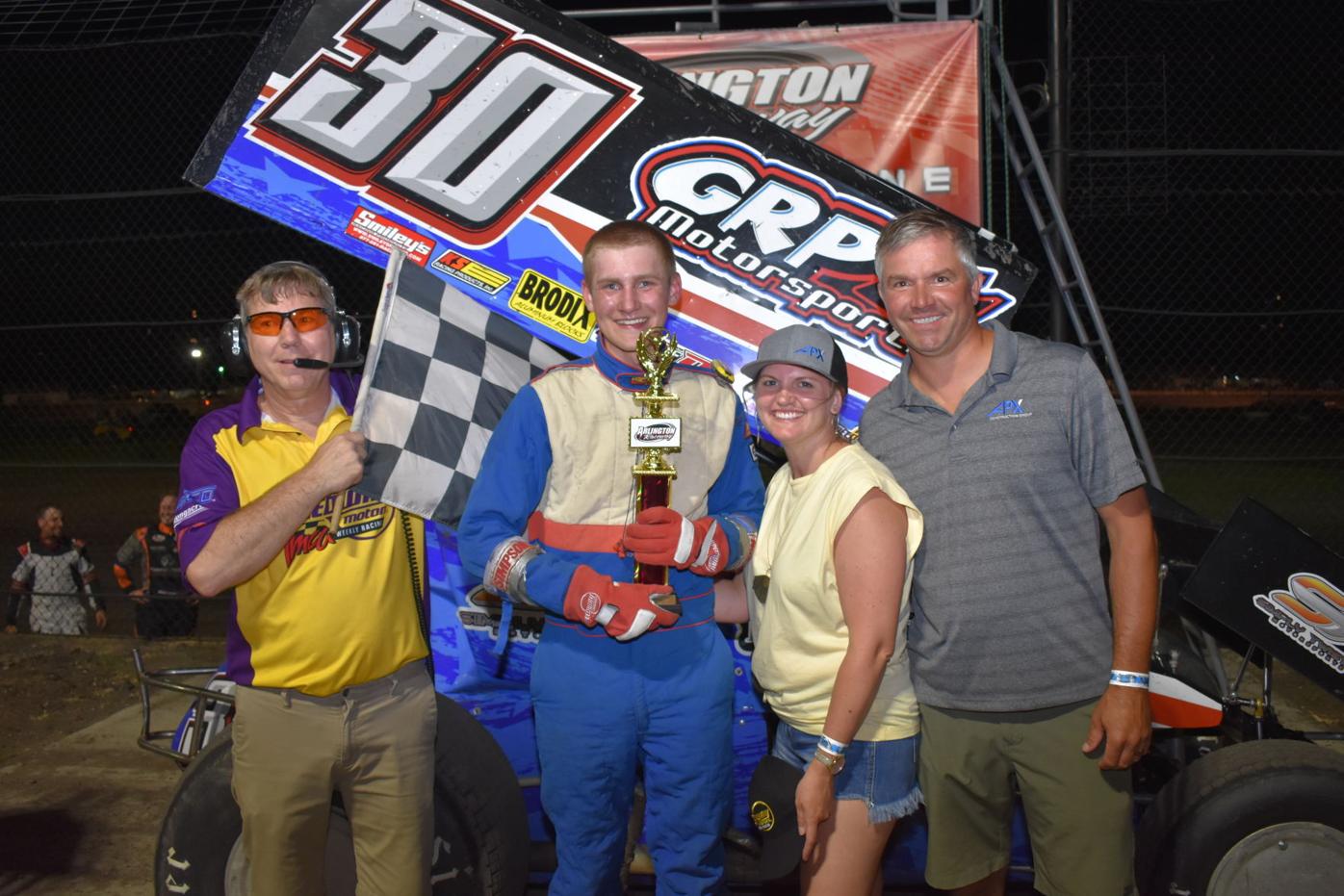 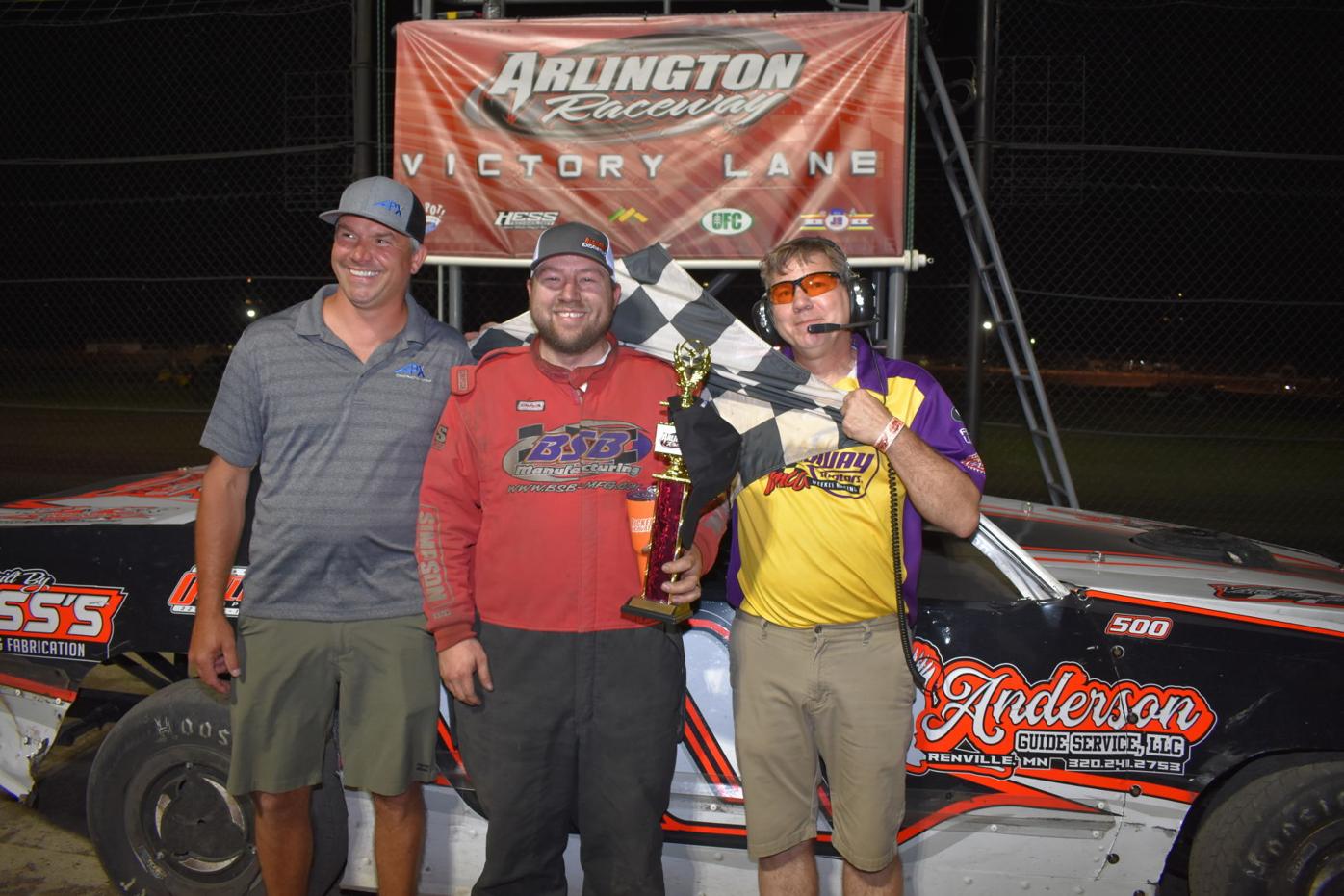 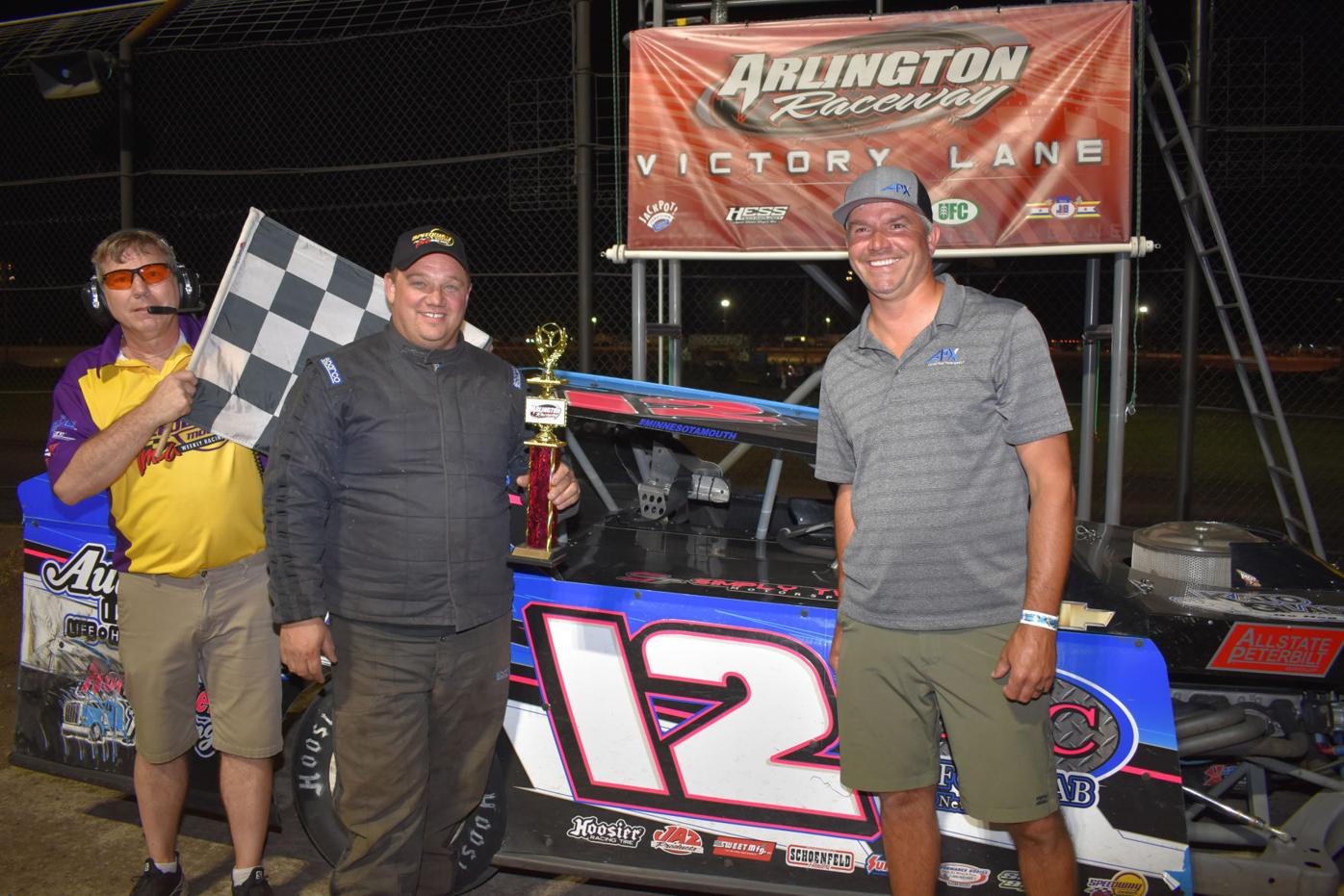 It was a steamy night of racing with plenty of action and fast racing on the track Saturday at Arlington Raceway.

The highlight of the night was in the IMCA Stock Car feature when Ryan Bjerkeset of St. Peter took a back row challenge along with Brent Uecker and Chad Schroeder for an extra $750 from the sponsors for winning the race. Seventeen cars started, and there were three different leaders. Matt Schauer led for the first 13 laps with a hefty lead but pulled off due to his car overheating. Chad Schroeder encountered a flat tire and pulled off on lap 7 ending his night. Alex Dostal took advantage of Schauer’s misfortune and inherited the lead but a yellow was thrown when Andrea McCain spun in turn 4. That opened the door for Bjerkeset on the restart as he had been picking cars off lap by lap. He got around Dostal to take the lead and remain the leader for the next 4 laps to win and an $1,100 payday. Dostal was so close but so far and settled for 2nd ahead of Dan Mackenthun. Brent Uecker, the other challenge racer, finished 6th.

Rookie driver Matt Johnson from St. Peter took the lead on the 3rd lap of the IMCA Sprint car feature. The first couple of laps belonged to Hannah Graf of Glencoe, but she pulled off the track after two laps. Johnson then powered his way to the front. A red flag came out on lap 7 when the 5z of Zach Wight flew off the track in turn 4 and rolled his car ending his night. On the restart, Matt took off again with his Dad, Bill, behind him. Matt led the remaining laps to win right ahead of Bill. Chris Graf took 3rd and Javen Osterman took 4th for an exciting finish.

Chad Porter of Madison Lake was victorious in the IMCA Modified class winning his heat and feature for a clean sweep. Josh Larsen from Glencoe was the early leader but by lap 3, Porter was in command. He had a generous lead on the field but as the laps were winding down and no caution flags, the race behind him was strong as Dan Menk, Clint Hatlestad and Matt Gilbertson were all neck and neck to battle each other. By the 11th lap, they all encountered lapped traffic but with only a few laps left Hatlestad was close to Porter’s bumper and tried unsuccessfully to get around him. Porter held his ground and won just ahead of Hatlestad. Menk took 3rd and Gilbertston took 4th.

Another new car in victory lane was Jason Schroeder from Plato in the IMCA Sport Modified race. The caution-free race saw him lead from start to finish from his front row start. Chris Neisen of Henderson was fast on the track and had his sights on the top spot but he was working hard to fend off Matt Looft. He did a great job of blocking Looft from passing him. In the end he was successful taking 2nd just ahead of Looft.

The Outlaw Hobby feature saw Karl Hewitt Jr. of Henderson take the lead on the 2nd lap of the caution free race to win ahead of Dakota Robinson of Arlington. Hewitt also had a clean sweep for the night as he won his heat as well.

The IMCA Compact feature had a tough time getting started. After two tries, the drivers started single file and finally got a race going. Gary Schumacher led the first lap while Justin Dose of Brownton moved quickly from his 9th place start to capture the top spot in only two laps. Soon he had the company of Marschall Robinson from Arlington who had started right behind Dose. The two raced side by side for several laps but in the end, Robinson overtook Dose to win. Dose took 2nd ahead of Jr. Esquesda while Alan Lahr took 4th.

Scott Porter from Madison Lake and Matt Olson from Franklin had an awesome race going in the IMCA Hobby feature. Porter led the first 5 laps while Jordan Robinson stuck with him for those 5 laps. By lap 6, Olson who had started 10th, was battling both Robinson and Porter and went by both of them to take over the lead and go onto win. Porter held off Robinson for 2nd. Robinson took 3rd.

Justin McConnell of Henderson led the entire Truck Cross event taking the checkered ahead of Josh Compton from Glencoe and Jayden Voss of Le Sueur. The race was caution free, and McConnell drove around lapped traffic to win the first truck cross event of the year.