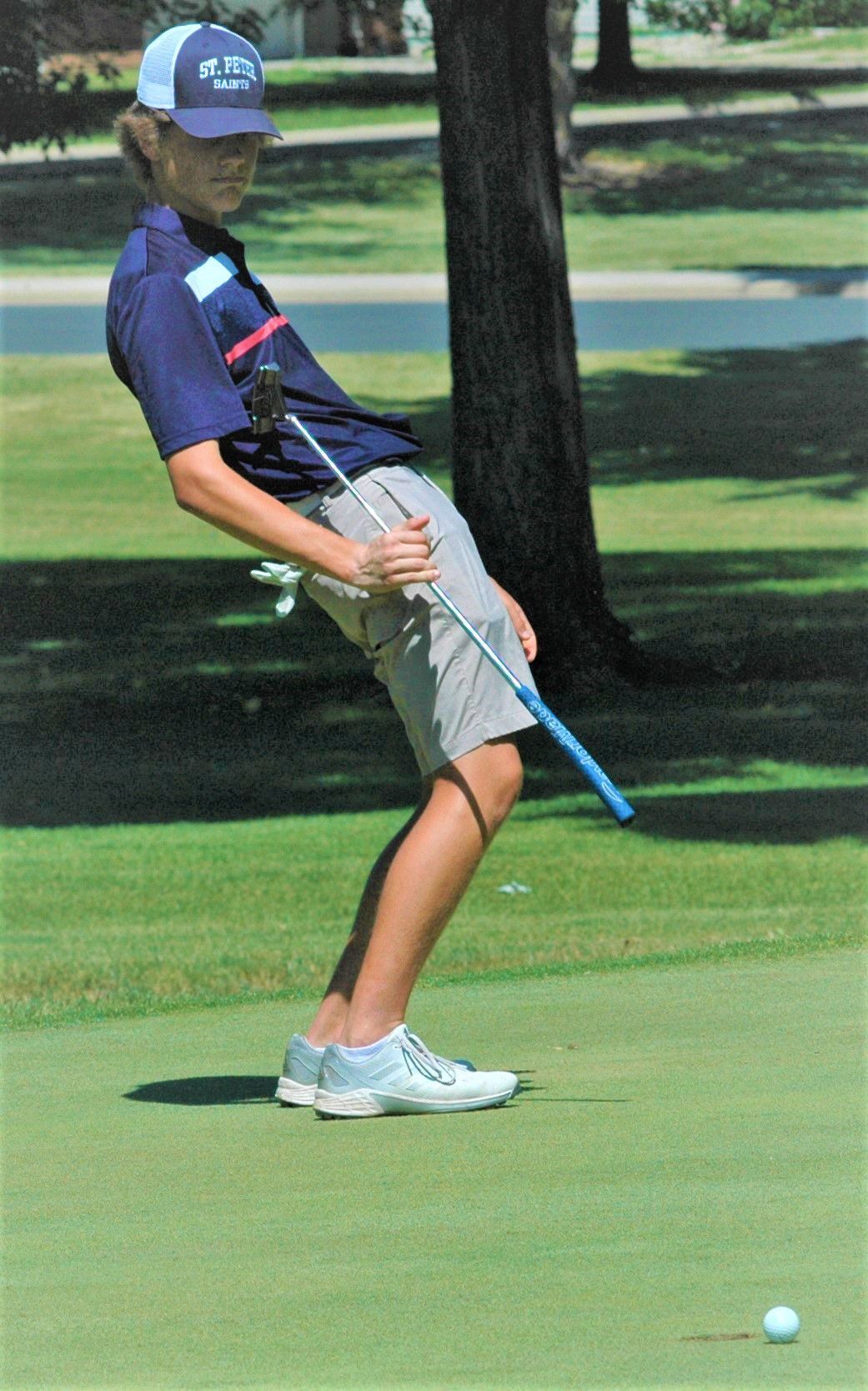 St. Peter freshman Kaiden Brovold tries to coax a par 3 putt into the sixth hole, but it just misses. However, he still had the low round of the day (even par 72), finished tied for fourth and qualified for state. (Pat Beck/southernminn.com) 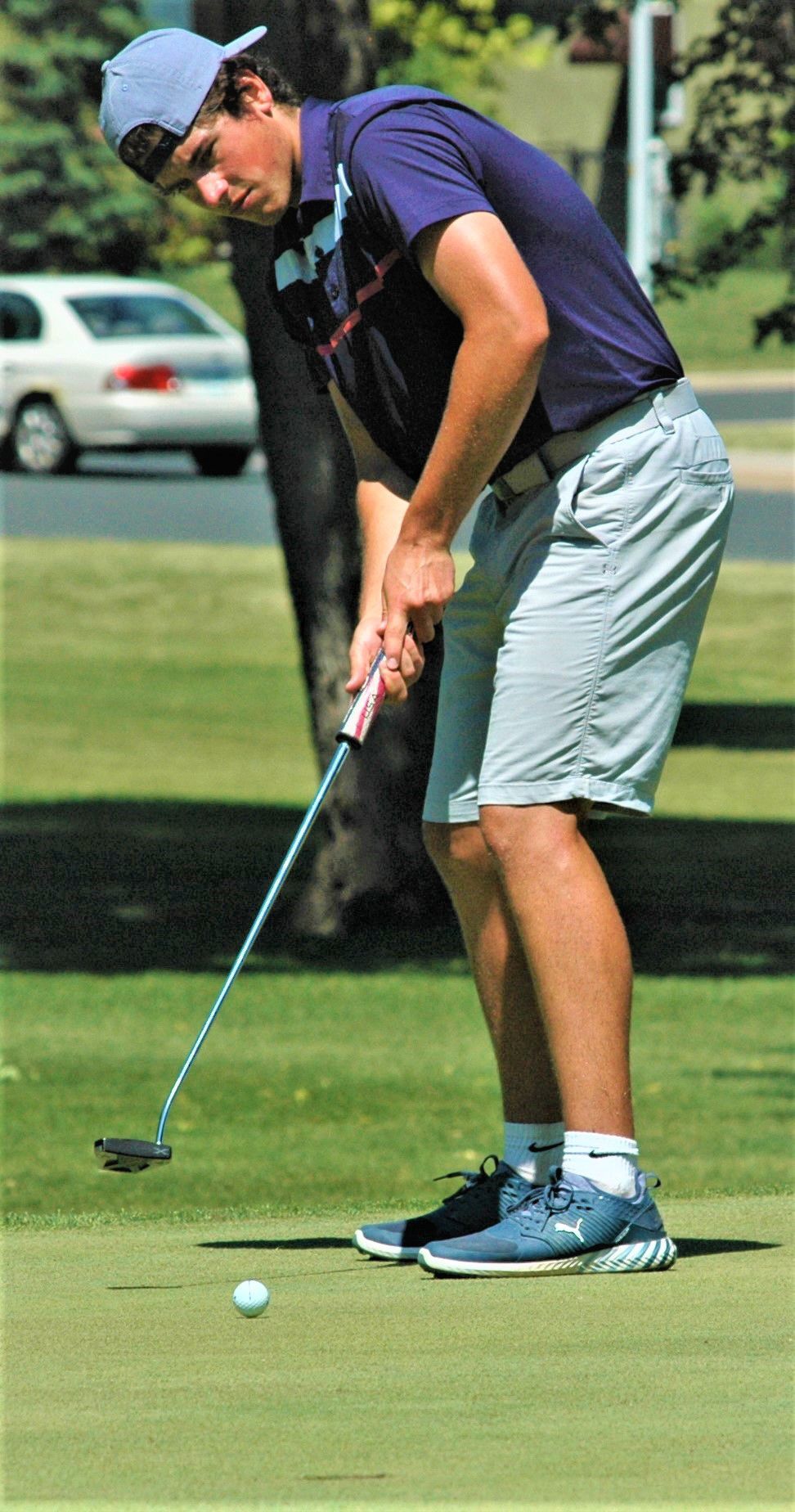 St. Peter senior Kendall Nicolai, who made state for the third time by tying for seventh overall, putts on the sixth hole at New Prague Golf Club. (Pat Beck/southernminn.com) 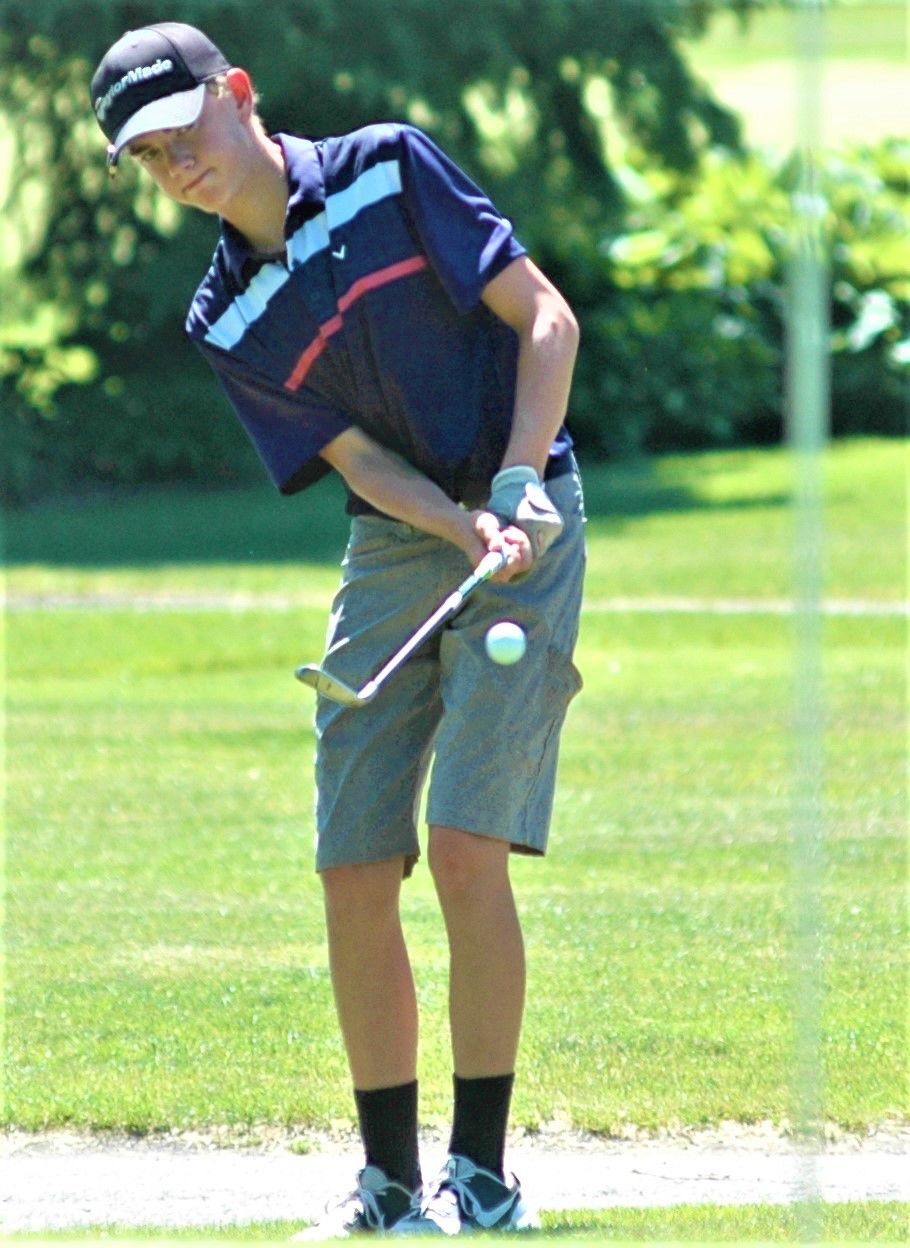 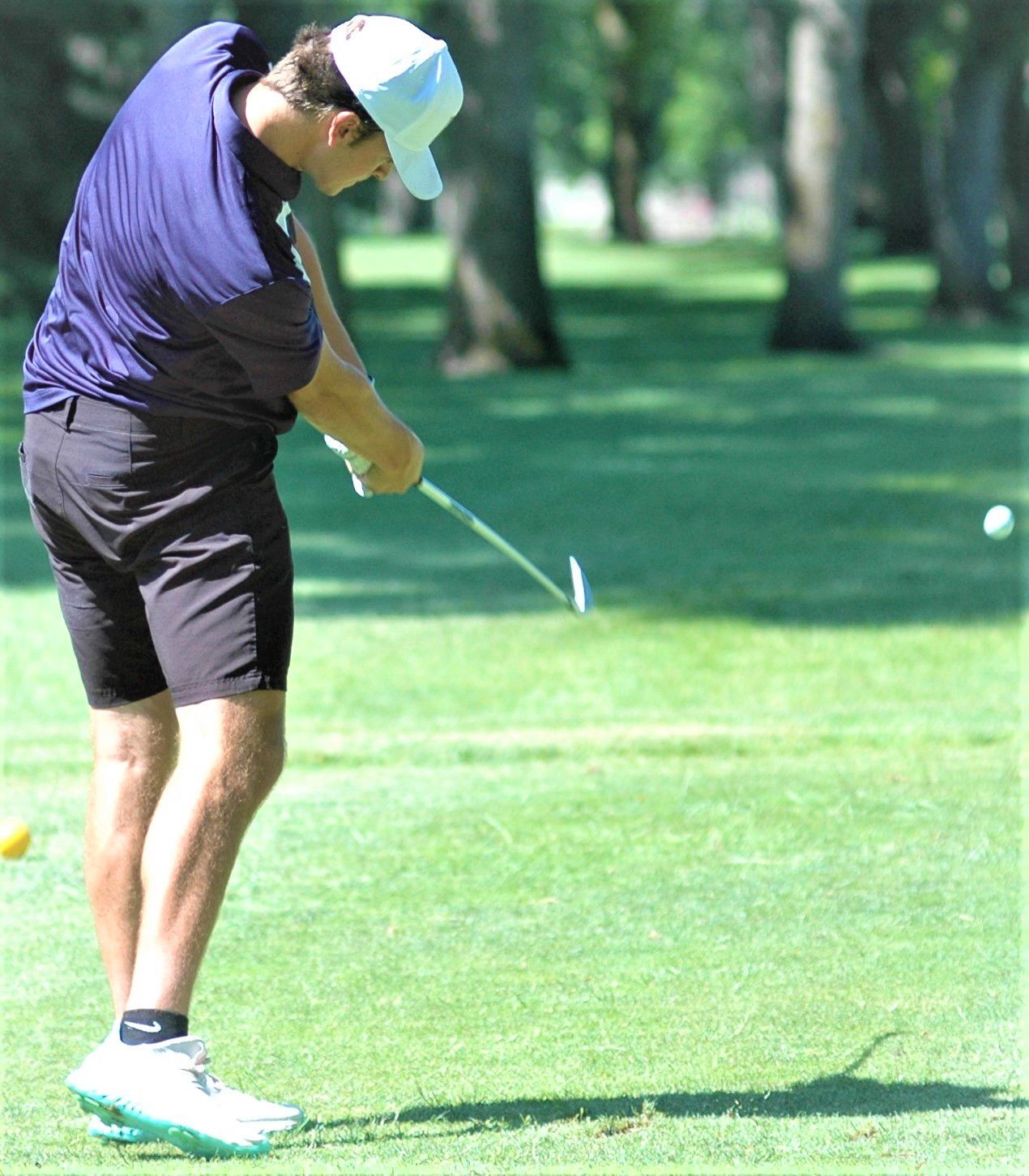 St. Peter senior Logan Moe tees off on the seventh hole at New Prague Golf Club. He finished his career with an 81 and placed 23rd in the section. (Pat Beck/southernminn.com)

St. Peter freshman Kaiden Brovold tries to coax a par 3 putt into the sixth hole, but it just misses. However, he still had the low round of the day (even par 72), finished tied for fourth and qualified for state. (Pat Beck/southernminn.com)

St. Peter senior Kendall Nicolai, who made state for the third time by tying for seventh overall, putts on the sixth hole at New Prague Golf Club. (Pat Beck/southernminn.com)

St. Peter senior Logan Moe tees off on the seventh hole at New Prague Golf Club. He finished his career with an 81 and placed 23rd in the section. (Pat Beck/southernminn.com)

It’s the first time for St. Peter freshman Kaiden Brovold to make the big show Tuesday and Wednesday, June 15-16 at Ridges at Sand Creek in Jordan.

Brovold led the Saints, tying for fourth overall with 80-72-152. His even par 36-36 on Tuesday at a steamy New Prague Golf Club was the best round of the tournament.

He improved 8 strokes from round 1. “Kaiden carded three birdies and 12 pars in his fantastic round today, and he finished 4th in the 2-day total and was the No. 1 state qualifier for individuals today,” St. Peter coach Neil Doose said.

Nicolai tied for seventh overall with 78-76 (154). The top team and the top five individuals not on the top team qualify for state.

Nicolai qualified for his third straight state tournament with a 40-36 (76). “Kendall improved his first round score by 2 strokes to lock in the fourth individual qualifier spot in the state tournament,” Doose said. “He finished seventh overall and tallied two birdies and 11 pars. Kendall played phenomenal down the stretch and was 1 under for his last 13 holes after starting plus 5 on his first five holes.”

Third for the Saints was freshman Anthony Nicolai who scored 1 better in round 2 to finish 3 strokes from qualifying for state. He golfed a 37-41 (78). He had one birdie and 10 pars.

Fourth team scorer for St. Peter was senior Logan “Mickey” Moe with a very good 41-40 (81), Doose said. “Logan played better than his scoring average in his final high school meet which was awesome to see. Logan was one of the leaders on this team and kept things light and positive and provided a positive perspective at all times. Logan carded 10 pars in his round today and finished four strokes better round 2. Logan also finished in 23rd place overall in section 2AA with a 166 two day total.”

Junior Marshall Nicolai’s 44-40 (84) was next, and he finished in 21st place overall with a two-day total of 164. Marshall tallied two birdies and seven pars.

Freshman Korey Lager shot 5 strokes better in round 2 shooting a 39-46 (85). He had one birdie and six pars to finish in 31st overall.

The St. Peter team came home with the runner-up trophy for the fourth time in five years. Trailing BEA in the team standings by 16 strokes entering the last day, the Saints faced quite a task to try and reel them in and they just could not get that done.

St. Peter improved 10 strokes from the first round, but that did not even gain any ground on the very talented BEA team, Doose said.

“I am so happy for this team as they battled the heat and some tough course conditions today to shoot a season best 307,” Doose said. Five of our six golfers shot better in round two and that shows this teams fight and drive to improve. We worked hard on club selections off the tee box this last week, and we hit many more fairways today. We also hit more fronts of greens on our approach shots today which is very important on New Prague’s small, sloped greens.

“I know this team had a goal of qualifying for state as a team, but fell short to a very solid BEA squad with a 2-day team total of 605. They need to hold their heads high and be proud to have been part of such a good St. Peter golf team. Our section is very talented this year and getting two individuals to advance is quite the accomplishment, and Kendall and Kaiden both worked very hard this year to get there.

Brovold is glad he bounced back after the first day.

“The first day was definitely in question for me,” Brovold said. “The second day was me just hitting greens in reg. (regulation). As I got to the 15th hole, I was feeling amazing where my game was at today.”

He hit 14 greens in regulation. “It was just very consistent play,” Brovold said.

“The putter was rolling really good today, too,” Brovold said.

His game has improved mostly in putting.

“It’s just a lot of practice, going out to the range,” Brovold said. “I’ve learned a lot this year that practicing is definitely a lot better than playing.”

Brovold has shot even par before with a 69 at Shoreland Country Club.

Brovold said he credits his success to his dad Troy Brovold, “who started me playing when I was 2 years old. He had a plan for me. He’s pushed me a lot to get out to a course every day.”

His goal at state “is to just to play the best I can play. I’m not going to worry about the field.”

Brovold has experience playing the Sand Creek five times. “It’s like two different courses, so I like that. The front nine is kind of like Dakota Ridge which is a very linksy course. And the back nine is a lot of trees kind of like here (New Prague).”

With three more years left of high school, Brovold said, “I’m looking to do a lot better next year.”

Brovold is part of a strong freshman class. “All of them are getting out every day, and that helps,” Brovold said.

The Saints are losing two varsity players to graduation, Kendall Nicolai and Logan Moe, plus two other seniors: Ryan Braun and Luke Simonette.

“We’re going to need a few guys to step up next year,” Brovold said. “I’m going to miss a lot of guys that are leaving. They’re all great friends and will be friends from here on out.

A long hitter, Nicolai averages about 320 yards per drive which doesn’t fit well with the short New Prague course.

Nicolai said he played consistently, didn’t blow up on holes and stayed in the game mentally.

“I started out slow, but I kept my head in the game and played through it,” Nicolai said. “I don’t really like this course at all. It’s kind of getting boring playing it six years in a row. It doesn’t not suit me at all. I did my best and played pretty well. It’s so short and tight. If I miss my driver a little bit, I’m in a bad spot. The fairways are narrow and the greens are small and fast. Half the time it’s over the green if I hit it right.”

Nicolai said he can’t wait to play the Jordan course. “That course is longer and a lot wider.”

He has improved since his sophomore season. “I have more length, and my iron game is a lot better than it used to be.”

A scratch handicap golfer, Nicolai’s goal is to win state with par or a little under. His career best is 2-under three times this year.