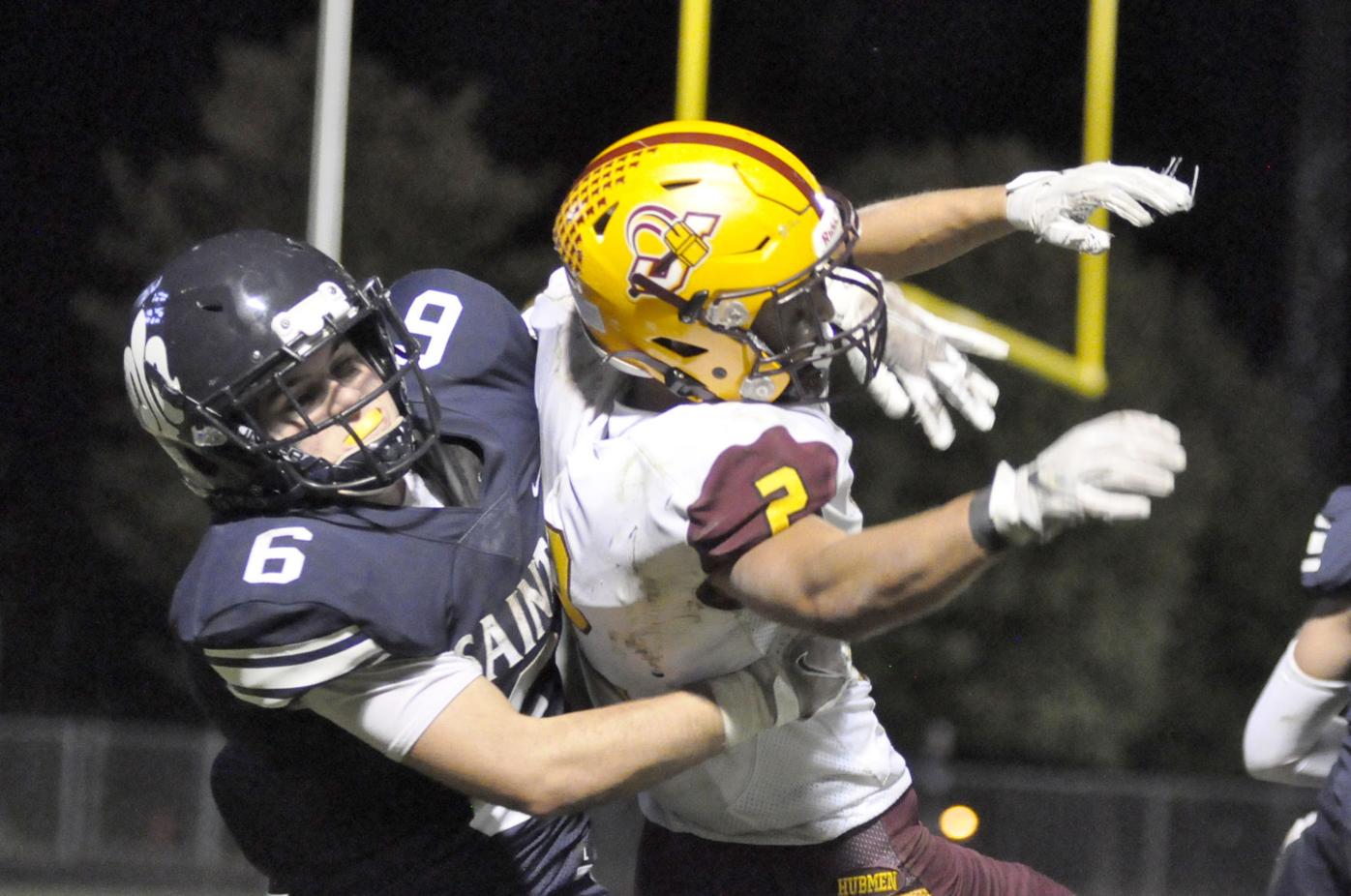 Defensive back Shea Hildebrandt breaks up a pass in the end zone on the final play of the game to secure the Saints victory. (Ben Camp/Southernminn.com) 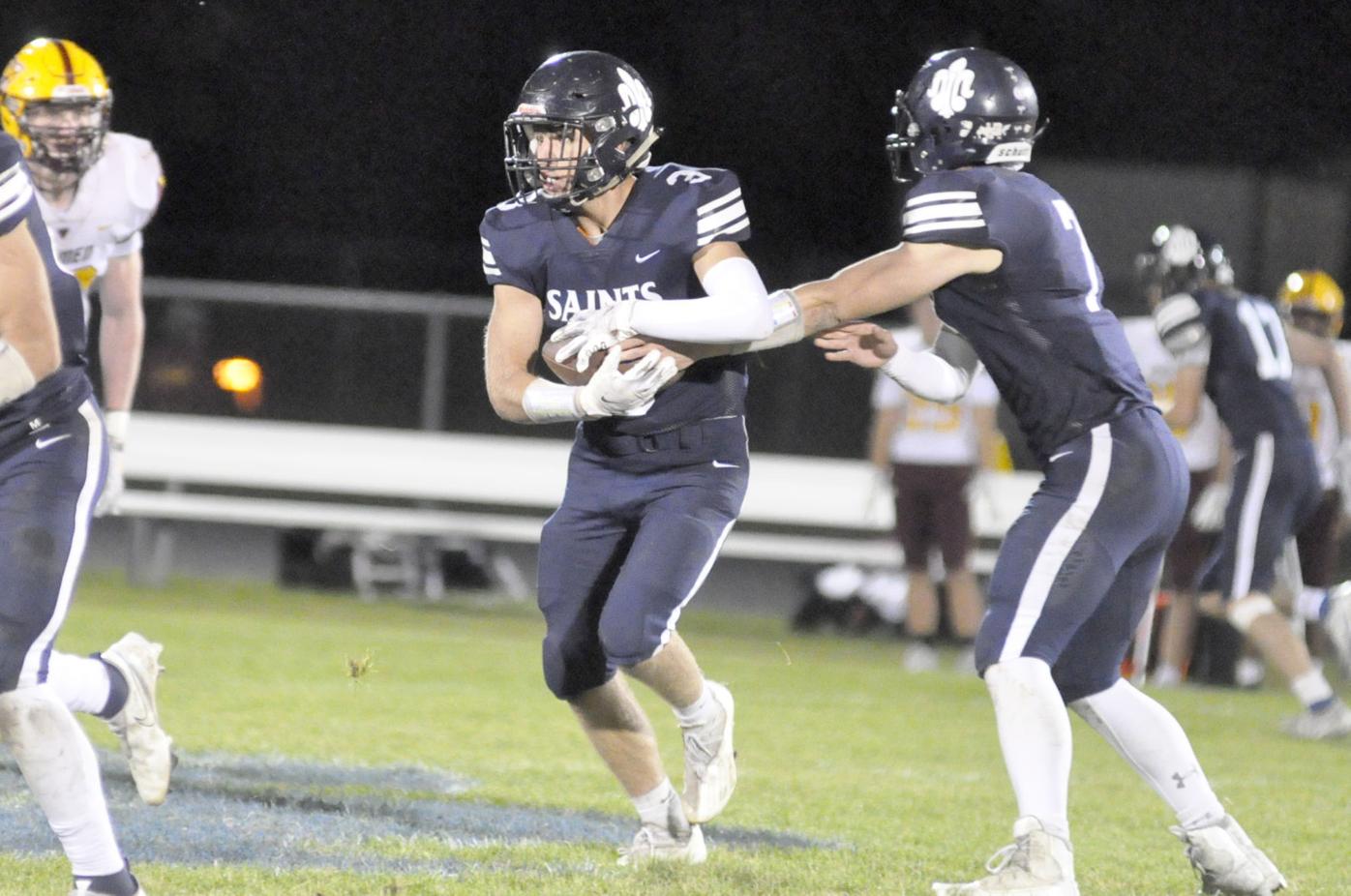 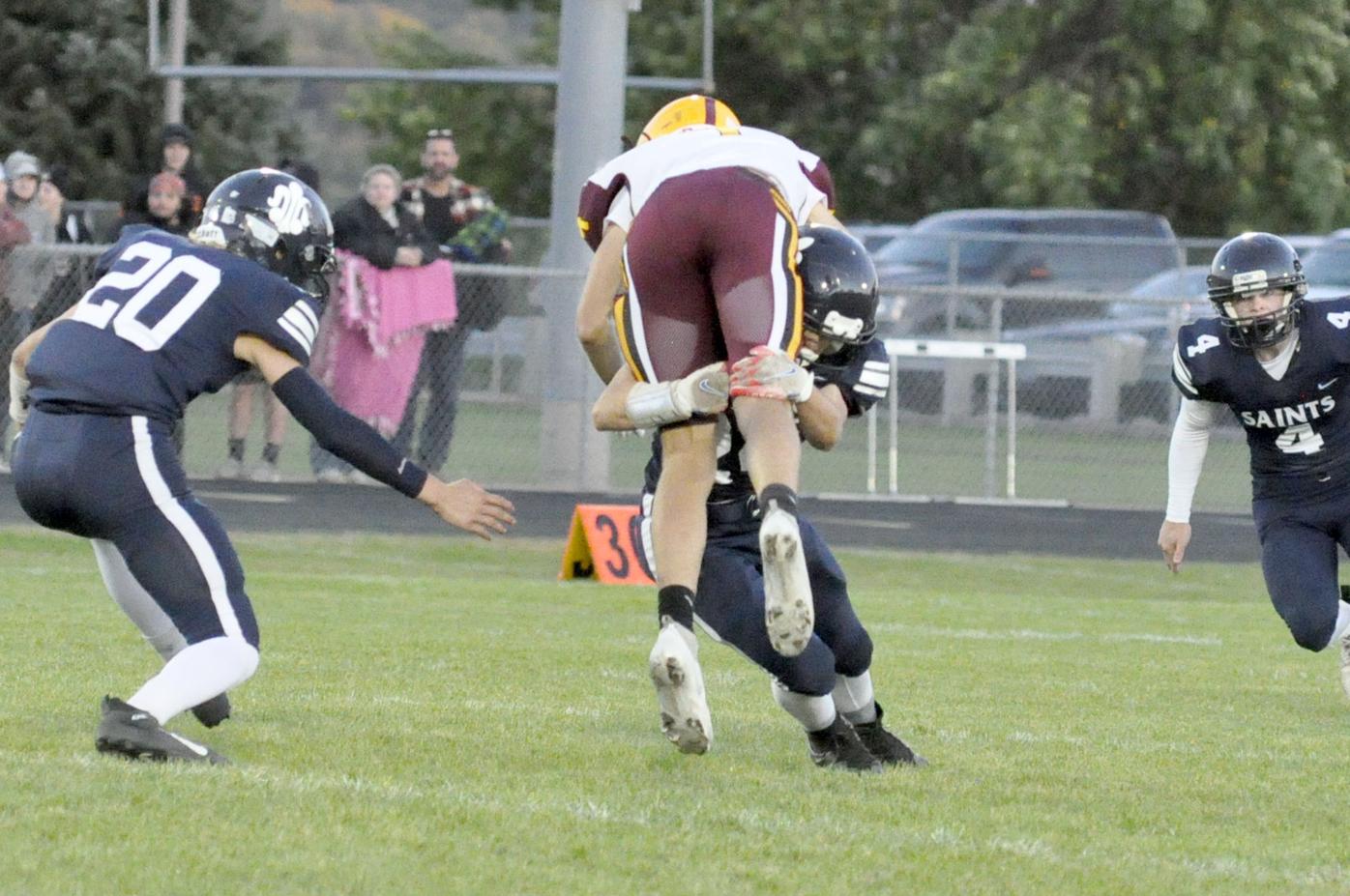 Dylan Tuma (24) wraps up a Jordan offensive player for a tackle. (Ben Camp/Southernminn.com) 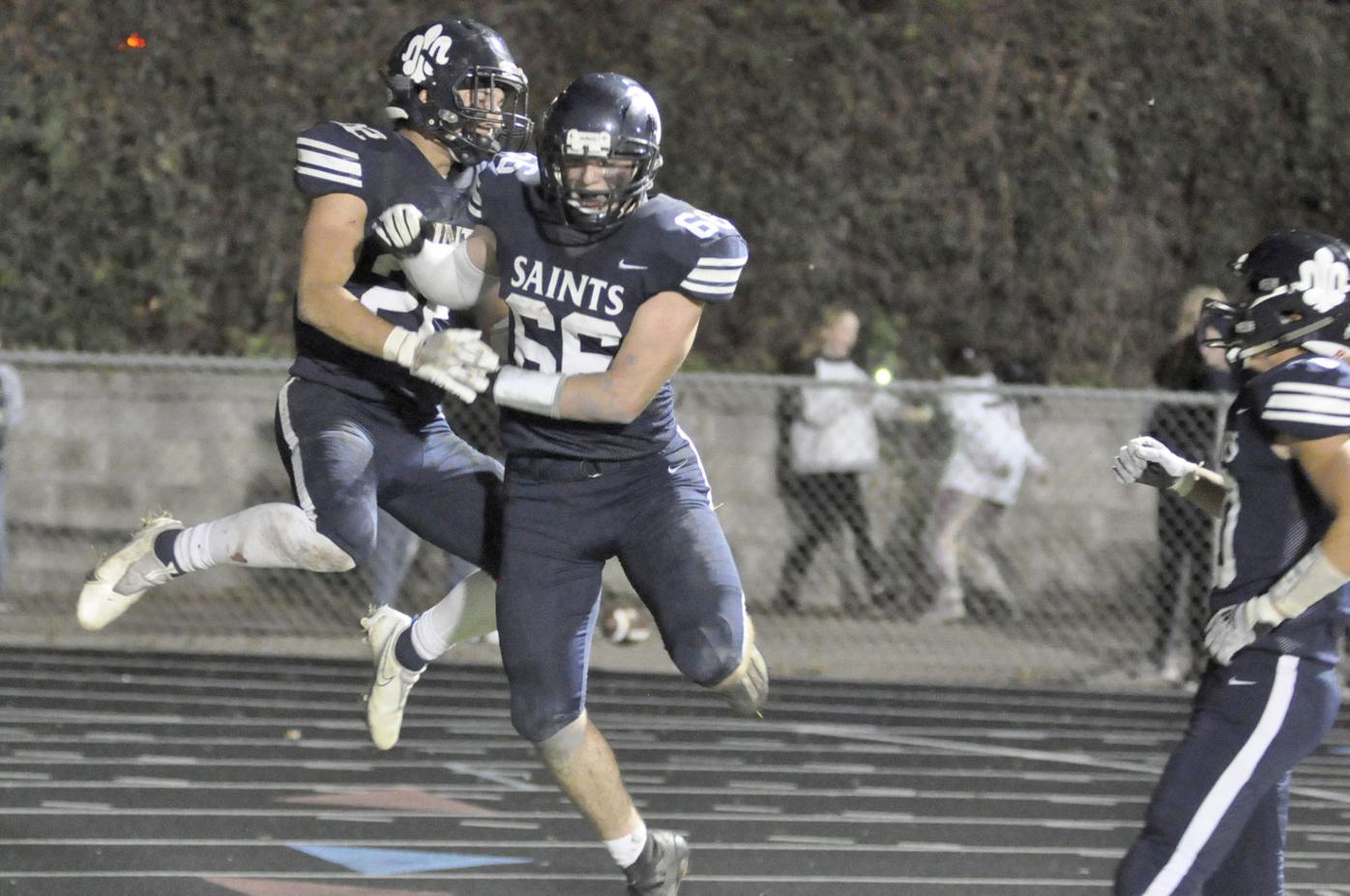 Vinny Guappone (22) and Connor Travaille (66) jump in celebration of Guappone scoring the go-ahead two-point conversion with 1:38 to go. (Ben Camp/Southernminn.com) 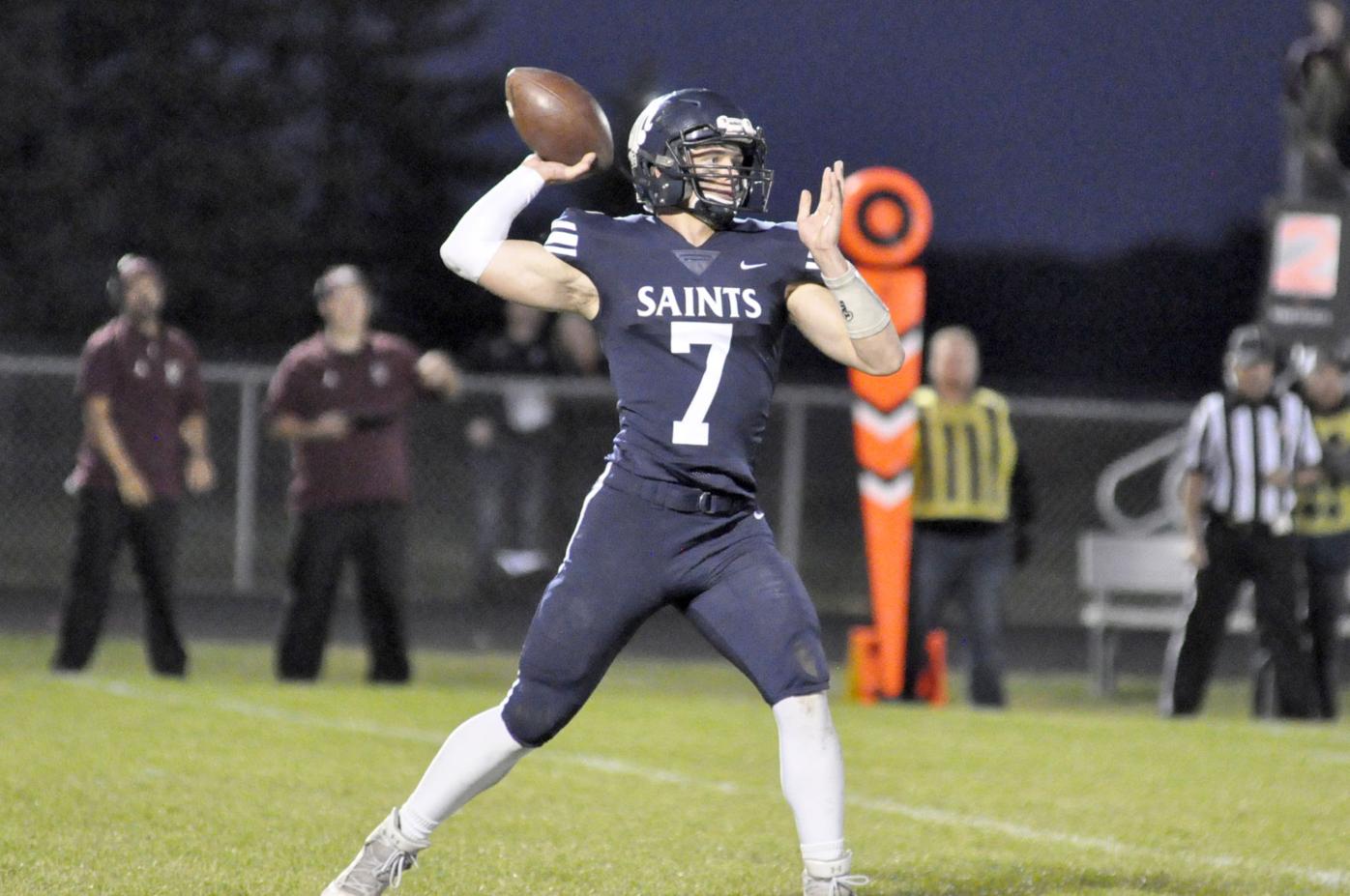 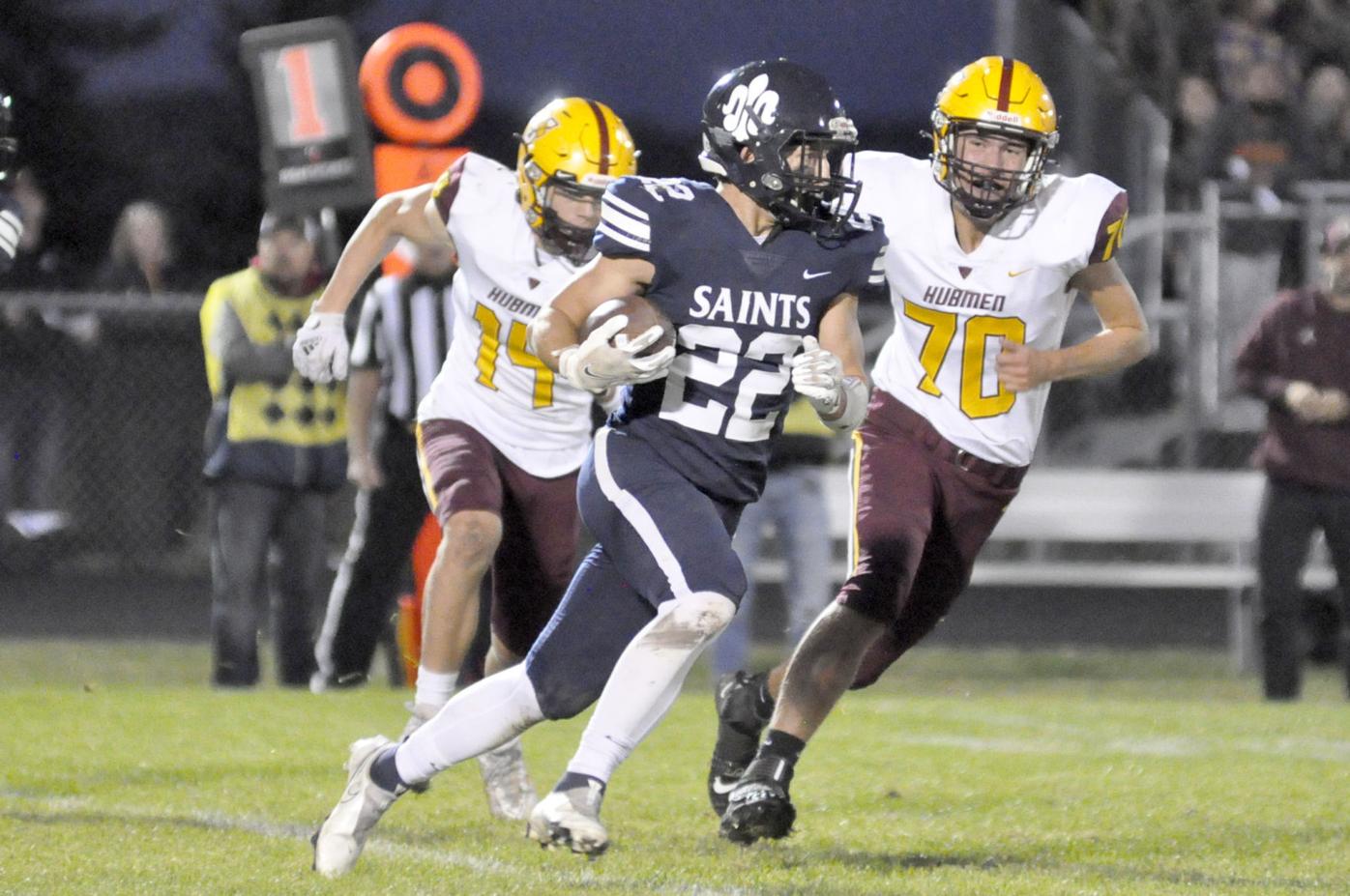 Running back Vinny Guappone breaks a run to the outside. (Ben Camp/Southernminn.com) 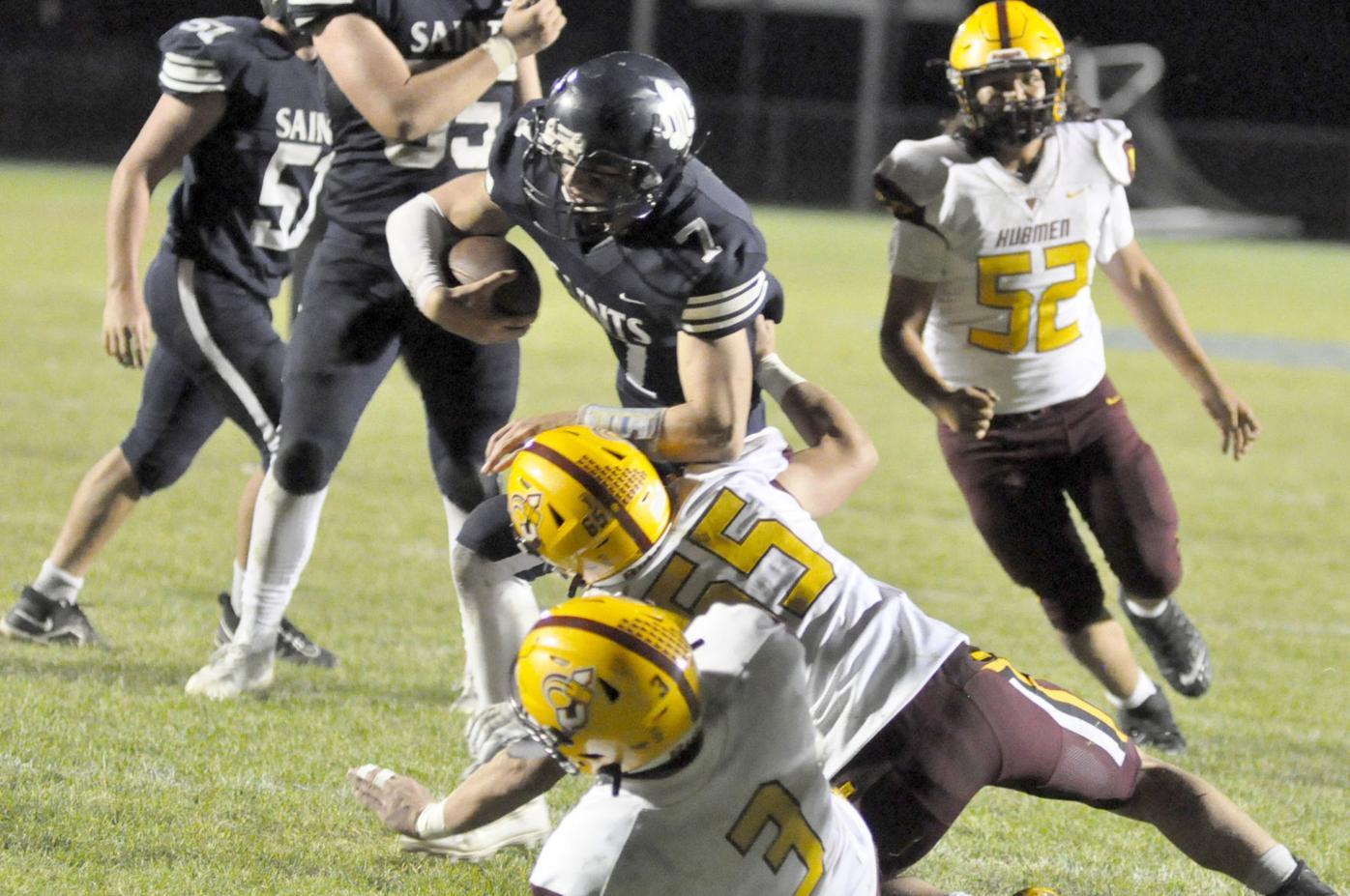 Saints quarterback Kole Guth fights through defenders attempting to tackle him as he scores a touchdown to cut the Jordan lead to 21-20 with 1:38 to go. (Ben Camp/Southernminn.com) 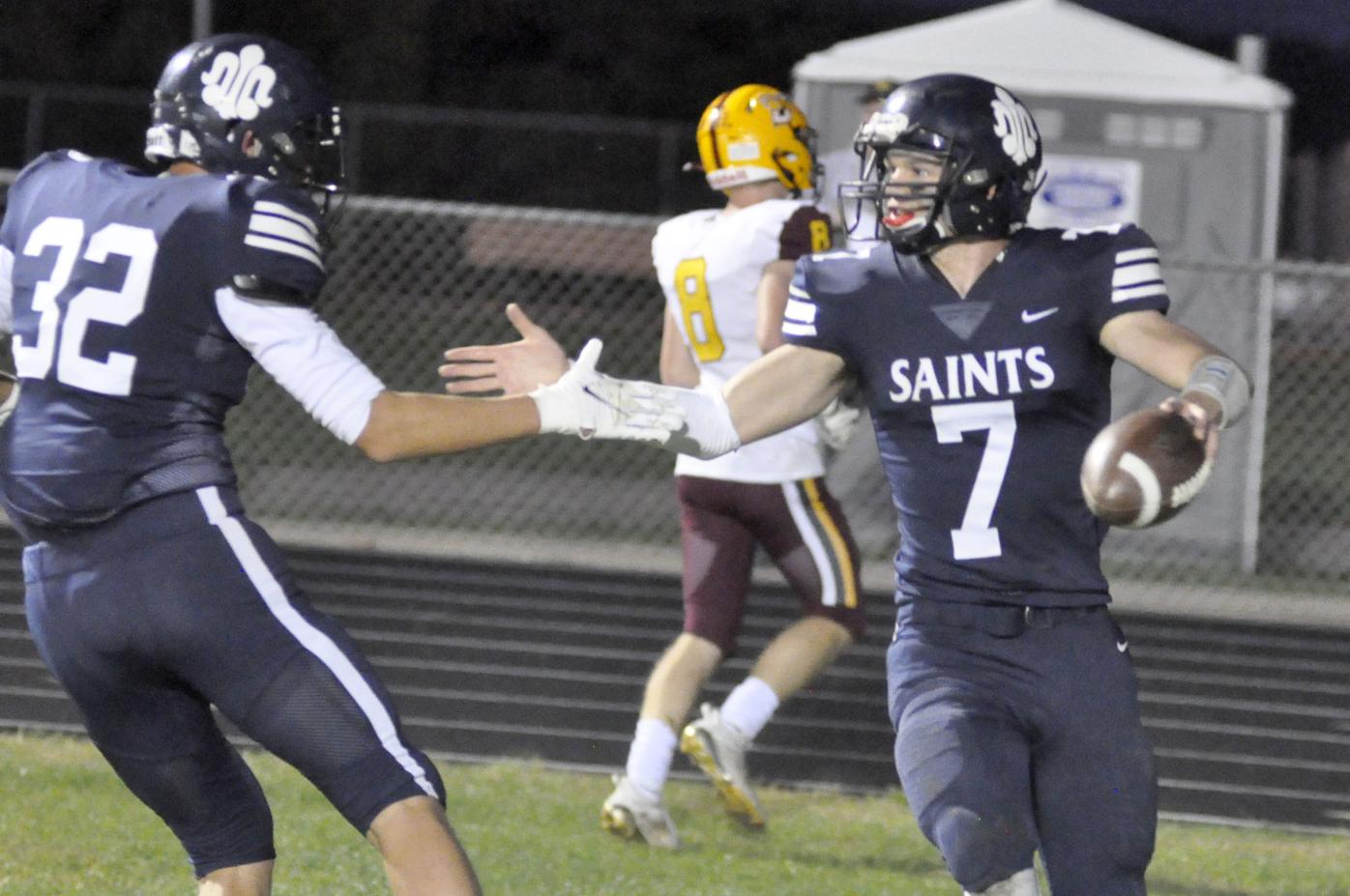 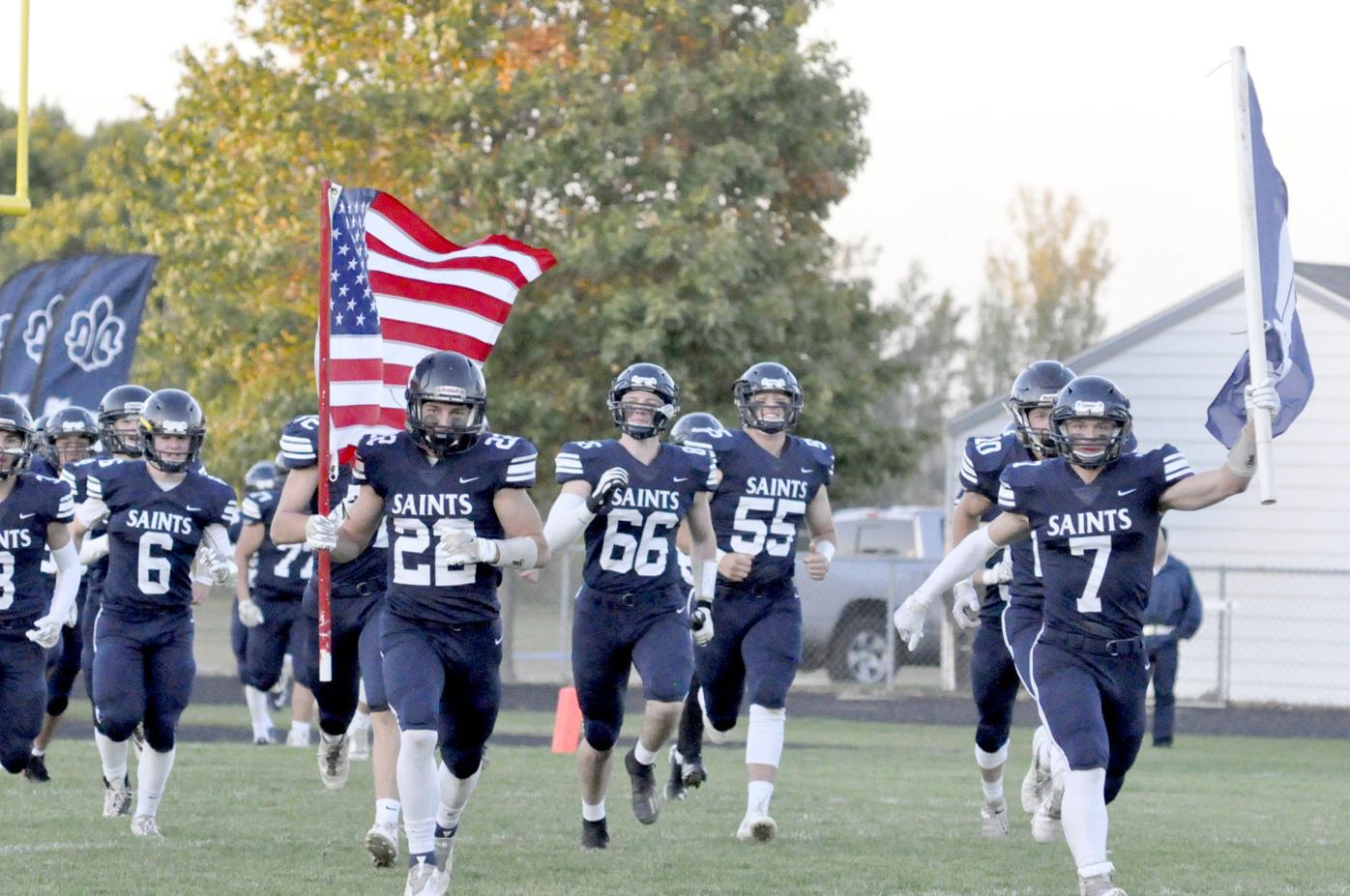 The Saints take to the field for Homecoming. (Ben Camp/Southernminn.com)

From time to time, a sporting event reaches peak excitement, as a single play ends the game and determines the outcome. Such was the the case Friday night when the St. Peter Saints hosted the Jordan Hubmen for homecoming in front of a raucous crowd.

With just 5.9 seconds to go in the game and the Saints in the lead 22-21, Jordan had the ball at the Saints 12-yard line with a fourth down and six yards to go for a first. The Hubmen offense, which had moved the ball through both the air and the ground all night, put the game in the hands of their quarterback who rolled out to the left, an action that had been successful all game, and lofted a pass into the back left corner of the end zone, where the entire game came down to a single receiver and single defensive back.

It was St. Peter’s senior Shea Hildebrandt who won the battle in the air, making contact with the receiver the moment he had the ball in his hands. Hildebrandt got his hands in good position and caused the Jordan wideout to lose control of the ball and with zeros on the clock, the victory for the Saints was sealed.

“It was an incredibly exciting football game. That’s really all I can say,” said St. Peter head coach Brian Odland after the game.

While numerous important plays occurred throughout, it ultimately came down to one great play in the most clutch situation.

“We prepped the kids all week that Jordan is going to get their yards,” said Odland. “We just can’t break, and they did a heck of a job at the end.”

The reason that the Saints even had the lead going into the final minute of the game was because of a defensive stand that resulted in a red zone opportunity for Jordan that led to zero points and a missed field goal.

The Hubmen had taken a 21-14 lead with 6:37 remaining after their running back spun out of a tackle to break a 51-yard TD run. On the ensuing kickoff, Jordan squibbed the ball into an open area along the right side of the field and recovered it, seemingly sinking any hope for St. Peter.

The Saints, though, stepped up, and after just two minutes had come off the clock, Jordan attempted a 27-yard field goal that came up short, giving St. Peter the ball back trailing by seven with just under four minutes to go.

“We just knew we had to make plays and that we had to stop them, and the kids rose to the occasion and did a phenomenal job of getting us the ball back,” said Odland.

Two plays later, Guth trucked through a pair of tacklers on a QB dive and stretched the ball over the goal line to cut the Hubmen lead to 21-20. With zero hesitation whatsoever, the Saints lined up with their standard offense to attempt a two-point conversion to take the lead as opposed to settling for a tying kick attempt.

Guth took the shotgun snap and began to run to the right, but seeing a defensive back bearing down on him, he pitched the ball out to running back Vinny Guappone who outran a defender to the edge to complete the conversion and take the lead with 1:38 remaining on the clock.

“The offense controlled the field and moved down and got the touchdown,” said Odland. “We’d already decided if we did that, we were going for two, and Kole Guth made a great read and got it to Vinny in space, and the defense just played a whale of a last minute and a half for us.”

St. Peter’s first touchdown of the night came on a 20-yard touchdown run from Guth to the left side where he outran the edge defender and put the team ahead 7-0 with 4:44 to go in the second quarter.

Jordan responded quickly to that score and a QB sneak up the middle from the one, followed by a PAT, which tied the game at 7-7 with 2:39 to go in the half. After a quick three and out from the Saints, Jordan threatened again quickly and with just over seven seconds to go their quarterback rolled out right looking and holding for a wideout to get open, but none did, resulting in him throwing the ball clear through the back of the end zone to end the half with the game tied 7-7.

After a couple of drives that went nowhere to start the second half, the Hubmen were pinned deep in their own zone after Guth punted the ball out of bounds at the six. Jordan broke free from deep in its own zone with a 57-yard run, and a couple plays later, took a 14-7 lead on a three-yard touchdown pass.

St. Peter responded a few possessions later after forcing a Jordan turnover on downs at the Saints 27-yard line. They drove down the field with chunk runs coming from Guappone and Guth, and after getting the ball down to the Hubmen 10-yard line, Guappone broke a run to the right side for a touchdown and the following PAT tied the game at 14.

After that, the sparks started flying, with both teams fighting for the win, and the Saints just holding on.

With the football game serving as the centerpiece of the 2021 Homecoming celebration — the Queen and King were announced before kickoff — the stands were packed to capacity to witness the dramatic matchup. St. Peter students should have had plenty of energy to take with them into the dance.

With the win, St. Peter football is now 2-2 on the season.