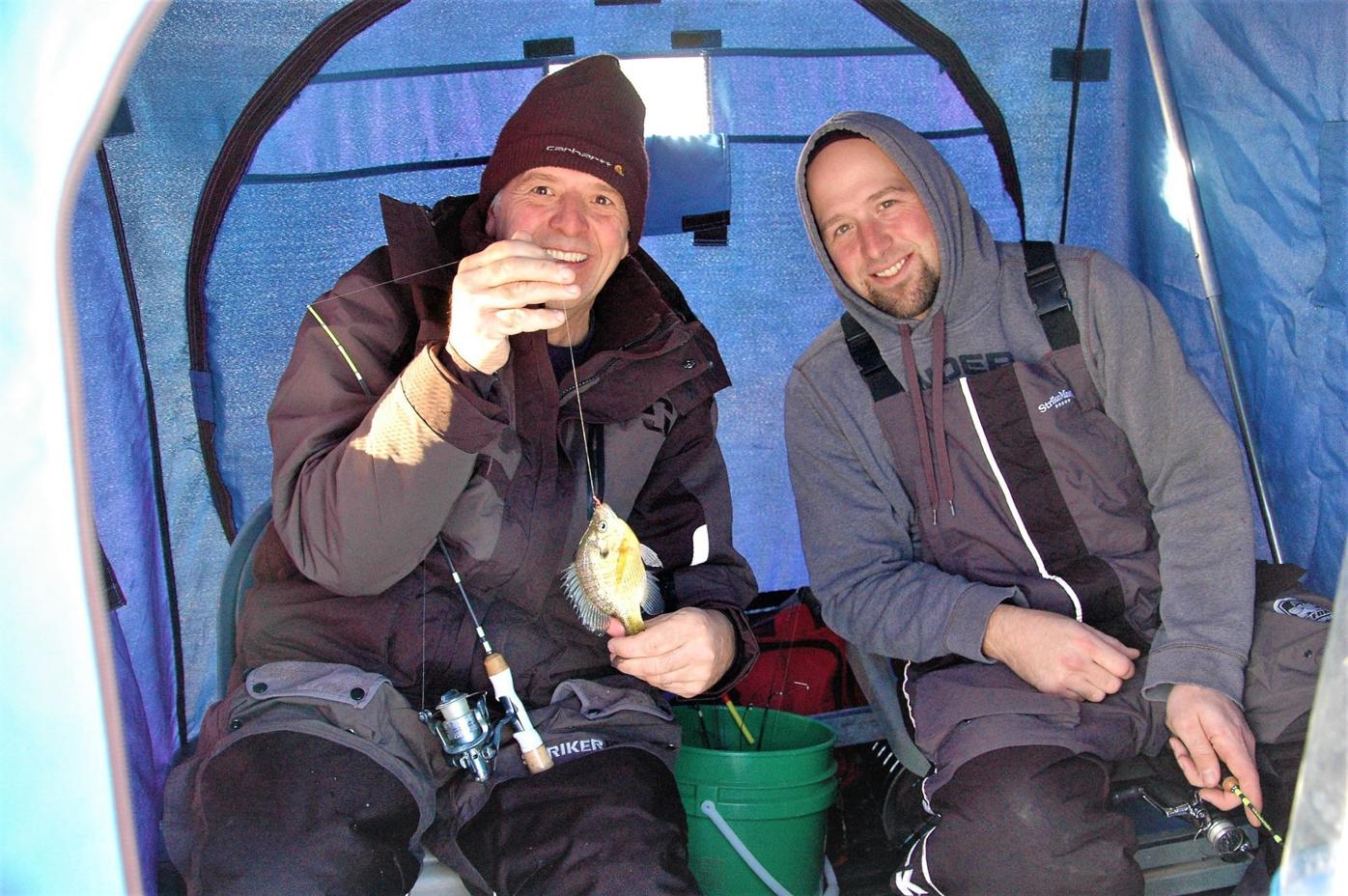 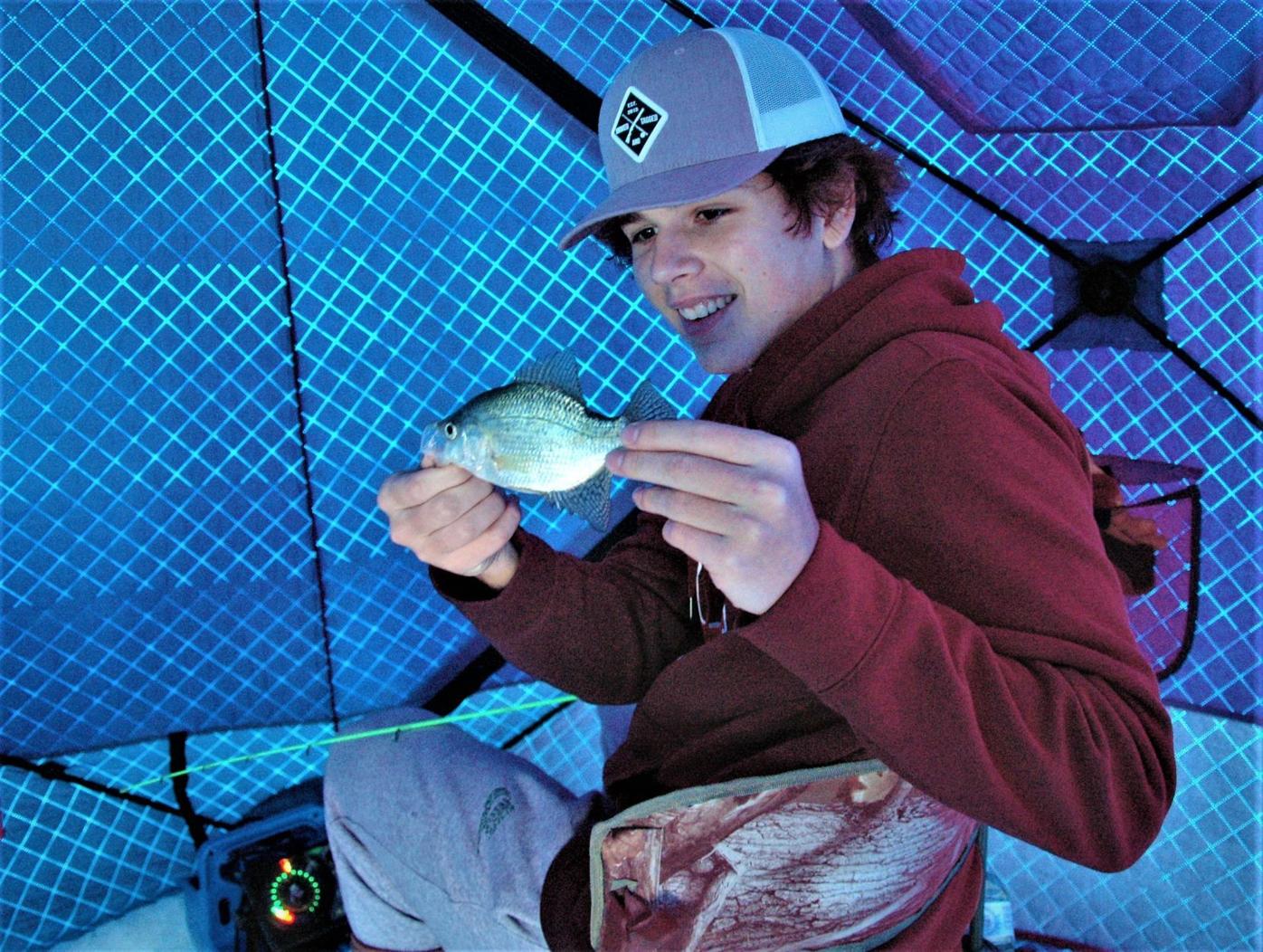 Lucas Walecha of Cleveland admires a crappie he caught on West Lake Jefferson. 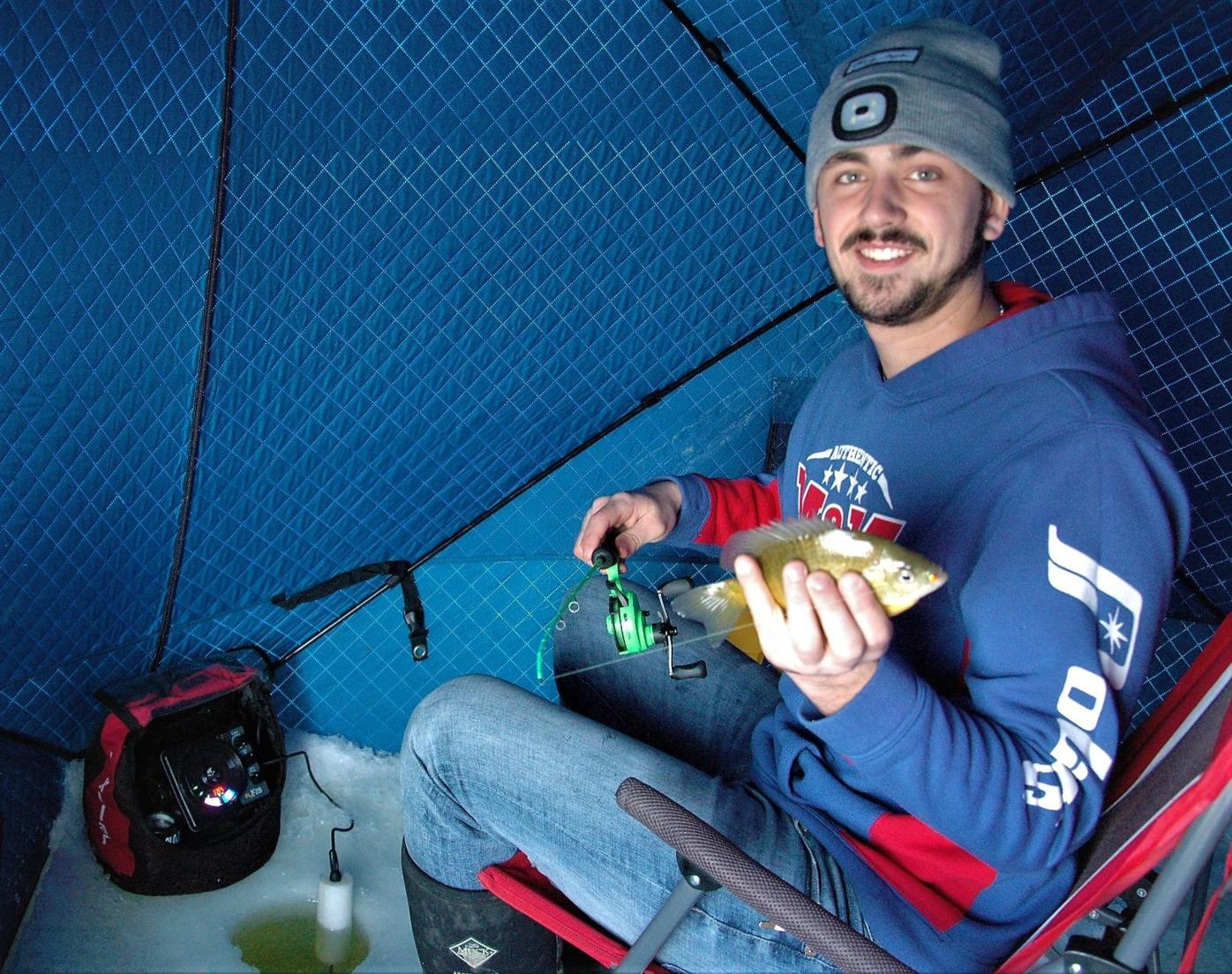 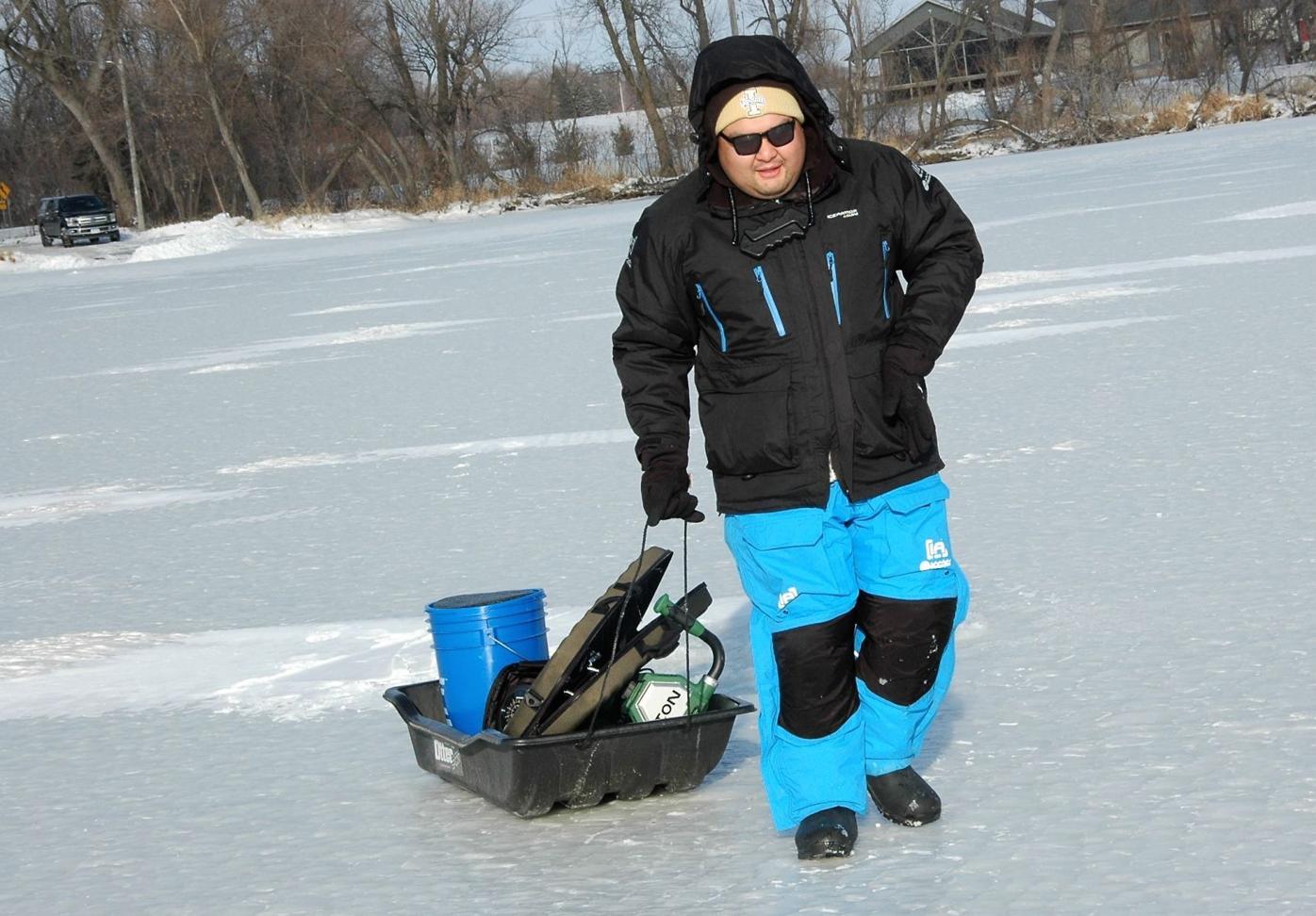 Peter Betsmany of Mankato pulls a sled with his fishing gear as hewalks out from the public access on West Lake Jefferson, searching for pan fish.

Lucas Walecha of Cleveland admires a crappie he caught on West Lake Jefferson.

Peter Betsmany of Mankato pulls a sled with his fishing gear as hewalks out from the public access on West Lake Jefferson, searching for pan fish.

Ice fishing can be done in a variety of levels of comfort.

The most extreme weather conditions are faced head on by fishing in the open air. While that method is the coldest, it also provides the most mobility of moving around to different holes to find fish.

Then there are the uninsulated canvas portable fish houses which provide fairly good wind blocking features as well as warming, especially with portable propane or electric heating.

Wheel houses, which are in various brands including the most well-know Ice Castles, offer most of the comforts of home with kitchen and sleeping quarters, plus cable television with underwater viewing systems to watch fish.

Early-ice anglers recently walking just out from the public access on West Jefferson Lake (Little Jeff) near Cleveland could not take advantage of the latter two shelter methods because the ice was not thick enough to withstand the weight of towing or driving the structures out of the lake.

But that didn’t stop dozens of anglers from hoofing it out on to the lake to fish for the willing pan fish (crappies, sunfish and perch).

Most hauled their portable fish houses and fishing gear including rods and reels, ice augers, fish finders, heaters, minnows, wax worms and other bait and tackle.

A few anglers fished out in the open air, including Peter Betsmany of Mankato, despite temperatures in the low 20s and winds gusting to 20 mph.

John Kocina of Le Center and his son Mike Kocina, who lives on Shields Lake near Faribault, fished in a flip-over Clam Fish Trap. Despite having a heater, they wore heavy duty clothing. John wore a suit which, if he went under the water, would keep him afloat. But with the ice a half a foot thick, that wasn’t a concern.

Seventeen-year-old Cleveland High School juniors Kolby Gens and Lucas Walecha fished together in a Clam thermal insulated house. With a heater, they required only minimum clothing including hooded sweat shirts.

Fishing in a four- to five-person fish house that Gens bought last year, it’s more than just a windbreaker. “It’s nice,” Gen said. The fish house also has battery-powered lights built in for night fishing. However, it needs anchors to keep it from blowing away, and it’s harder to set up than a flip-over style fish house.

The cold and windy conditions didn’t bother Betsmany, who was well dressed for the occasion.

“I’m fine,” he said. “I have a bib, an ice jacket, gloves and warm boots. And I tend to put my back toward the wind, so then it helps even more.”

He just wishes he would have worn ice spikes to prevent slipping. Although it snowed recently, most of the now blew away or melted, making it basically pure ice. “It’s a little bit slick out,” Betsmany said.

Betsmany, 27, still managed to walk out a couple of hundred yards to fish and drill a series of holes with his electric ice auger which provides a lighter and quieter version of the old fashioned gasoline ice augers, which are still common.

“When I moved to Minnesota I never knew ice fishing was going to be this fun because I’m from Idaho where there are like rivers and a lot of fly fishing and trout,” Betsmany said. “Out here I was dealing with what I call predators like pike, walleye and bass. You get to use fun lures for those like rippin’ raps and jerk raps.”

Betsmany tried ice fishing this year for the first time and loves it.

The anglers had different levels of success during the last couple of hours of the afternoon.

Interviewed first at about 2 p.m., Betsmany had only encountered a few small perch. A day earlier he said he caught five good-sized crappies (about 8 inches) at dawn and was hoping to find the school again using his fish finder. He drilled a series of four holes, moving from hole to hole to try to find fish in a variety of depths from 11 to 17 feet. He also used a search bait, a rattle spoon which is a more visible and noisy bait to call in fish. When they came in, he switched to a smaller jig or wax worms as bait.

“During early ice where I’m chasing the crappies and bluegills around where they’re a bit more shallow especially during daylight,” Betsmany said. “I set up a grid where all four holes are mine and I bounce from hole to hole. If I’m not marking on one hole, I’ll move back and forth. Then if they’re not biting, I might go a little bit deeper.”

People in fish houses have a chance to stay warmer, but Betsmany said he learned how to ice fish being more active and chasing them down.

Fishing closer to shore than most of their other anglers, he also keeps his distance from the crowd as a courtesy.

But he had a hard time getting the fish to cooperate.

As the day moved on at 3 p.m., the fish started biting better. Gens and Walecha started to catch fish consistently including small crappies and perch and nicer sized sunfish in the 7-inch long range. The used a small teardrop type glow-in-the dark lime green jig tipped with a minnow head. “Toward the night, it helps a lot,” Walecha said.

The smaller presentation also attracted more fish to bite than a full minnow, and it’s easier to catch smaller ones with smaller mouths. They also kept jigging and moving the bait to draw the attention of the fish.

In 20 minutes of fishing in 12 feet of water, they caught two nice sunfish (7-8 inches), two perch and two crappies.

“We usually go on Little Jeff at the start of the ice fishing season,” Gens said. “I like to move on to Big Jeff (when they can safely drive out on the ice). I got a Ranger, we can drive that out.”

In his third year fishing, Gens said: “My dad wasn’t really into it. These part couple of years when I moved to Cleveland I’ve been doing these more outdoorsy things. Once the ice is here, we bring the house out and we’re out about every weekend. I like the feel of catching fish. I just like relaxing and catching fish.

Fishing for two years, Walecha also likes “just catching ‘em, and I like watching the Vexilar (portable fish finder), the line bouncing up and down.

On the last stop of the afternoon, about 3:30 p.m., the Kocinas were having the most success, catching numerous crappies and sunfish but releasing most of the small ones while keeping enough of the bigger ones to eat. The bigger crappies were about 8-9 inches, while the sunfish were 6-7 inches. They also used minnow heads as bait, plus wax worms.

“They’ve definitely picking up toward the evening,” John Kocina said of their first outing this year fishing in 13 feet. “That’s generally the case, not always. We’re trying to get enough for a meal for my mother, and I think we’re about there. She’s 88 years old, and we loves fish.”

“We like to panfish wherever we hear they’re catching them. There were quite few houses on this lake. That was the reason we decided to come out here and give it a try. Where you see housea, you assume something is going on. Sometimes its’s the time of day. Fishing is generally better early morning or late evening.”

The Kocinas both have use flasher fish finders . John has a zoom Vexilar and Mike has a Mar-cum.

They also take advantage of the light-biting fish by using tickle stick rods that have a light tip that bends easier and shows light bites.

“These are better that spring bobbers,” John said. “If you’re fishing outside, spring bobbers tend to freeze up. These don’t. And you don’t have to sit and watch your corks. Ice fishing is kind of neat with all the equipment they have nowadays. It’s much easier.”

And, John said, fishing is “certainly better than going to work.”

Mike agreed: “A bad day of fishing beats a good day at work.”

John, who is a a truck driver, has time off from work in the winter.

“We make asphalt, so spring through fall we’re busy,” John said. “In the winter we get laid off, so in the winter time we have fun. And people need something to do outside with the corona thing. It gives people a good reason to get out of the house.”