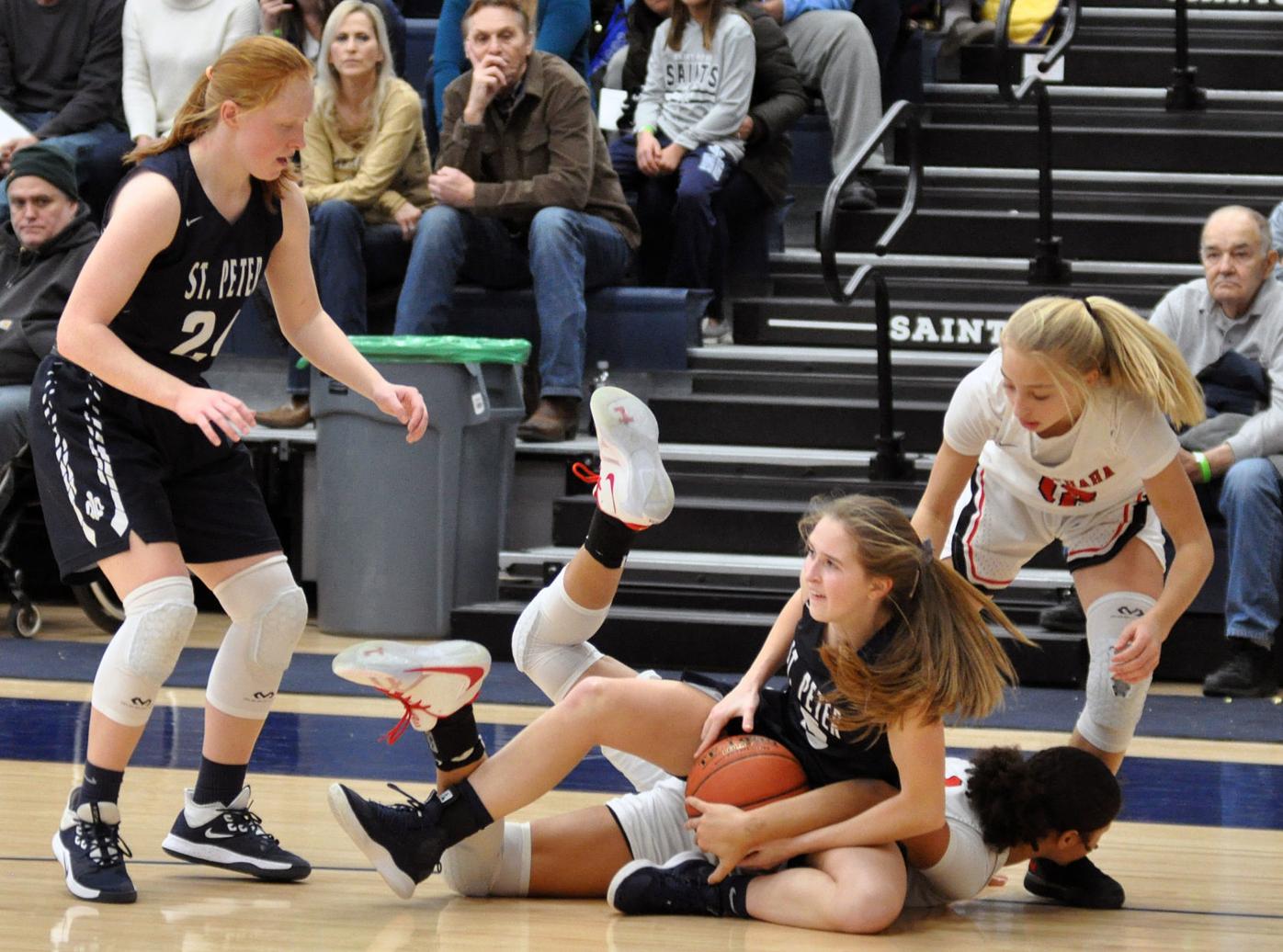 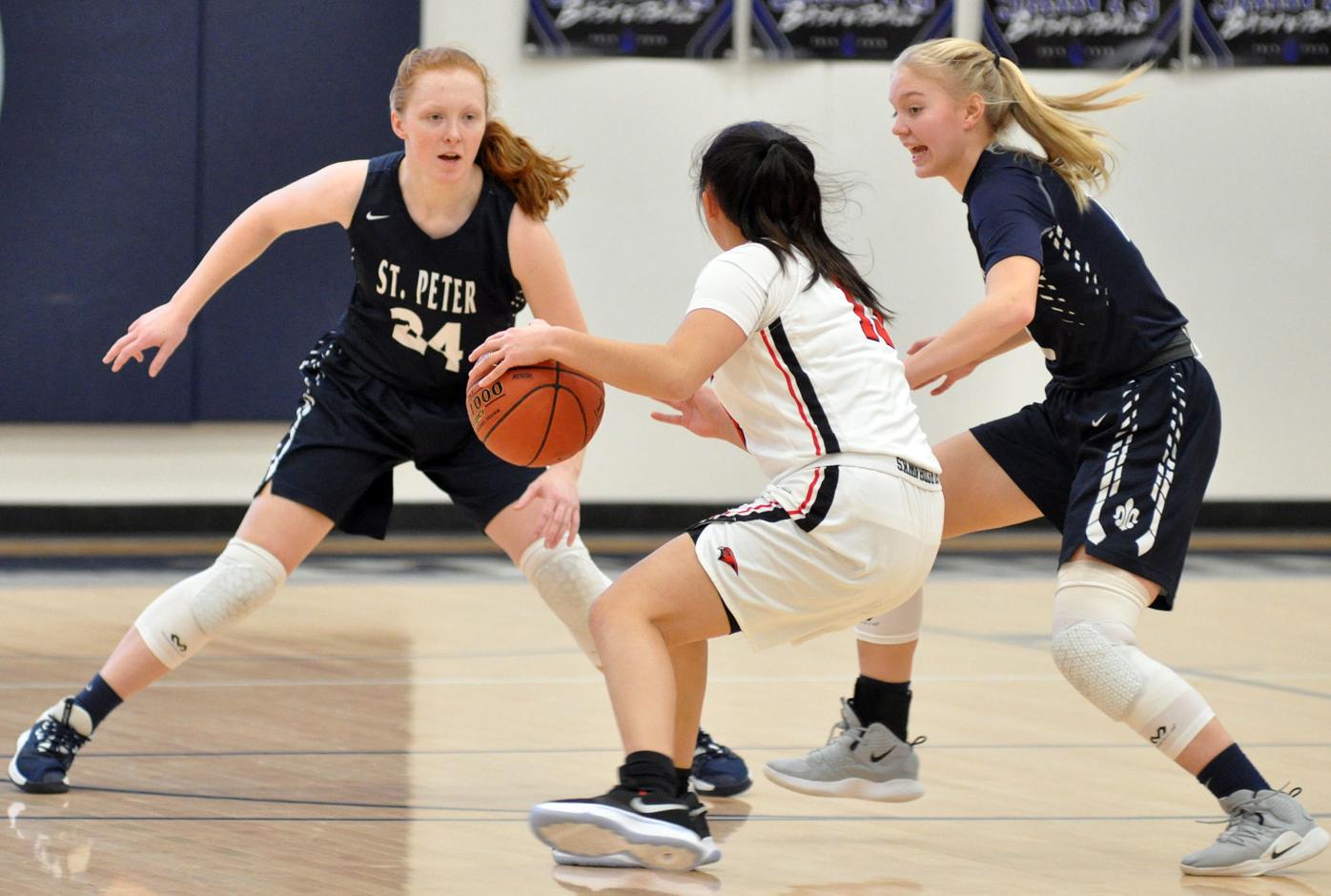 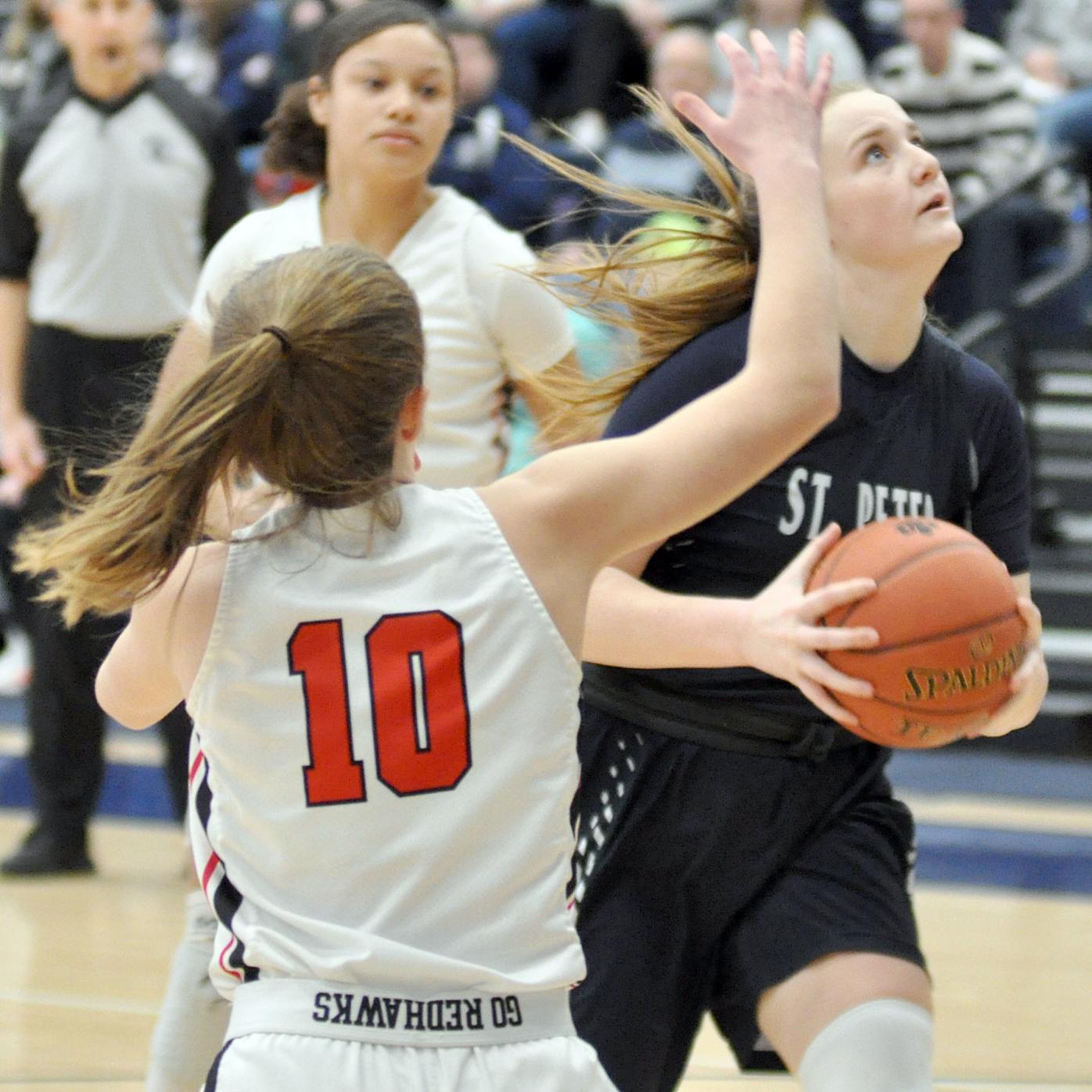 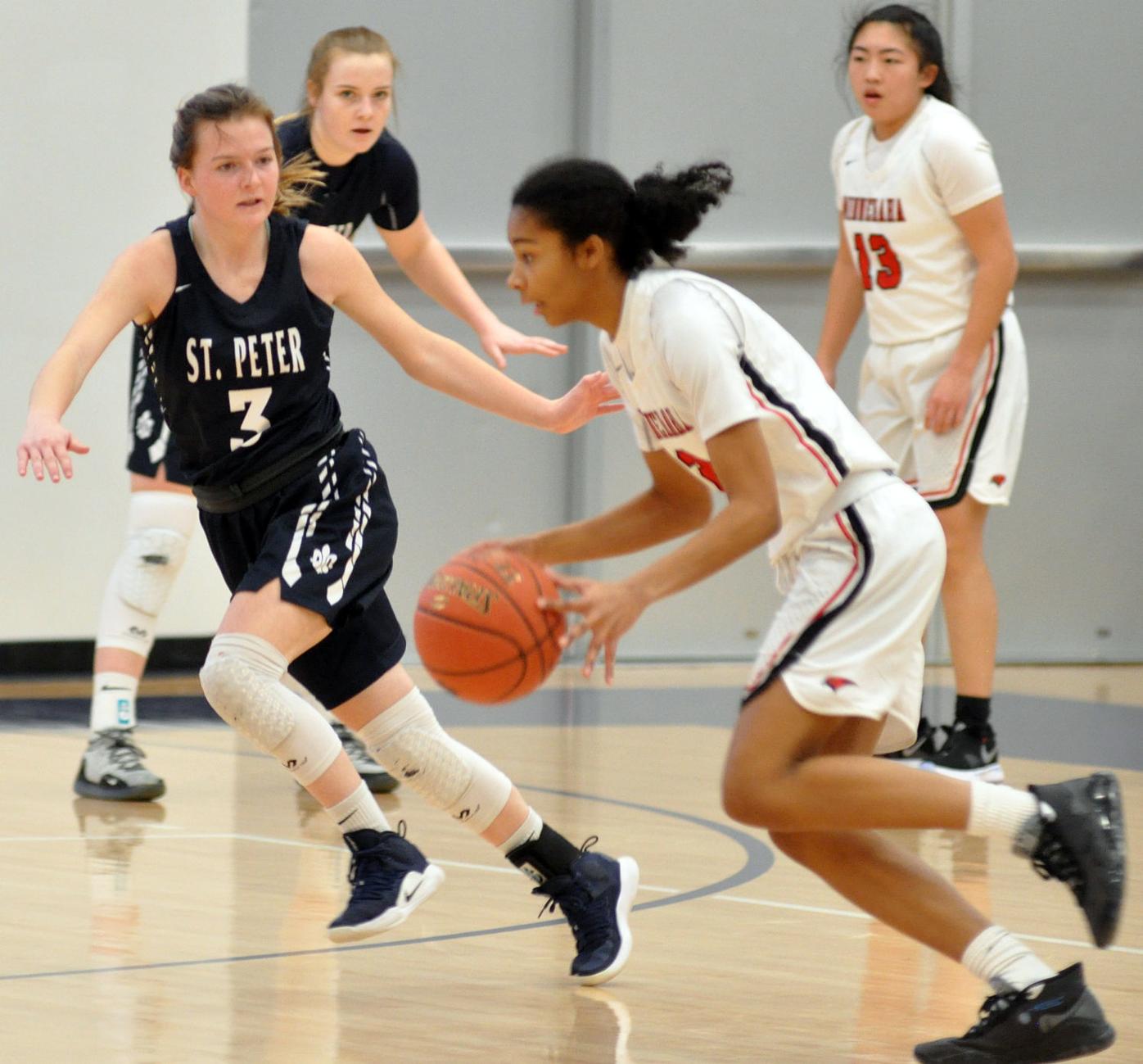 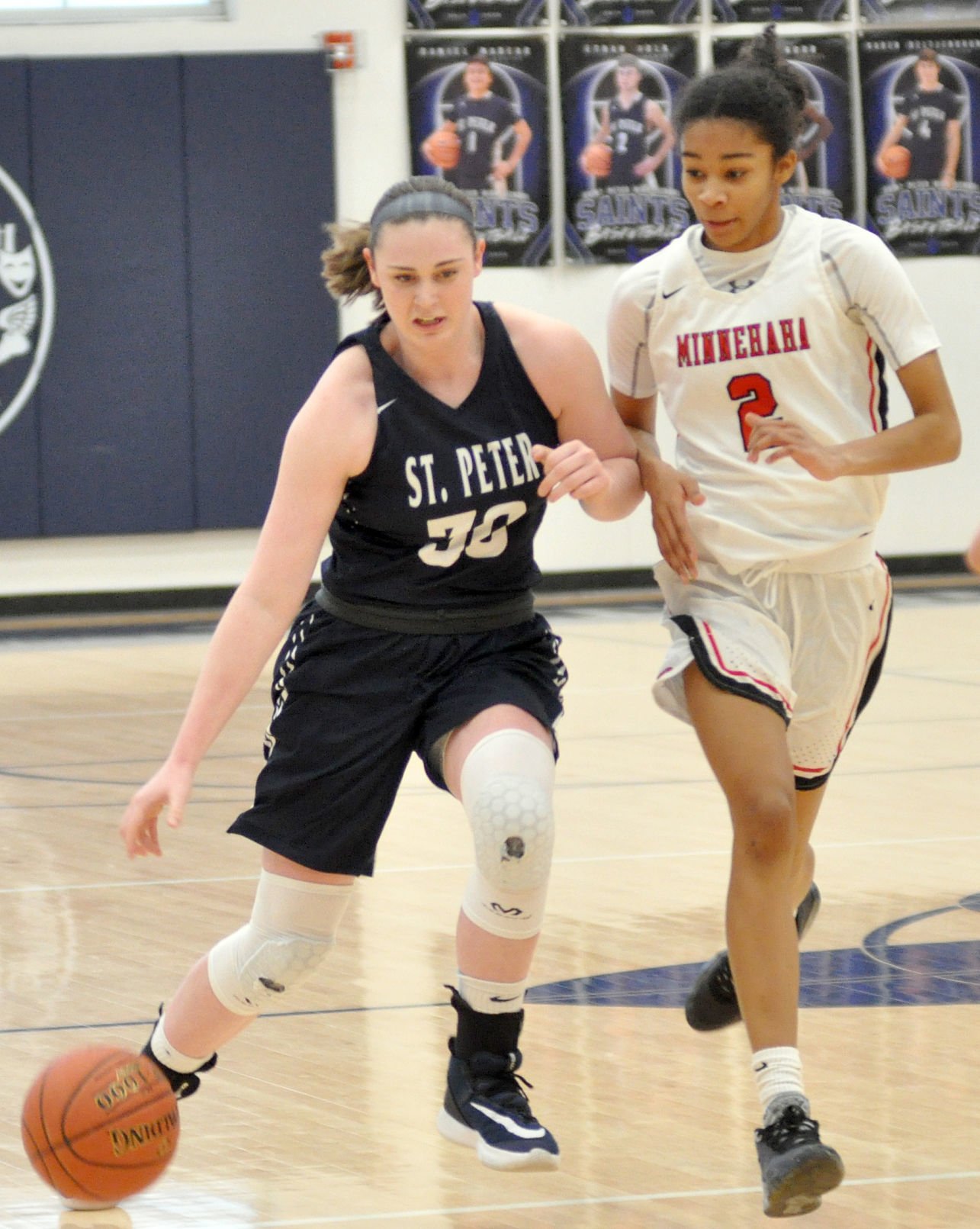 The Minnehaha Academy versus St. Peter girls basketball game Saturday provided a good preview of the playoff atmosphere the teams will face soon.

In front of a nearly full St. Peter gym, the Redhawks rallied to defeat the Saints 52-40.

“It’s fun playing in a playoff atmosphere,” St. Peter coach Bob Southworth said. “It’s a good opportunity for the girls. You’ve got to get used to that environment. Young girls haven’t been in that environment. It’s fun to watch the talent and play against it.”

Sarah Conlon led St. Peter with 16 points and three assists. She made 3 of 5 on 3-point shots and 5 of 6 free throws.

But there was no stopping Minnehaha’s one-two punch of point guard Mia Curtis with 24 points and guard Kate Pryor with 20.

The Saints took an 18-9 lead with 6:18 remaining in the first half on a basket by Kelly, assisted by Conlon.

But the Redhawks scored the final six points to cut the lead to 23-21 at halftime.

St. Peter held the lead until midway through the second half.

The Saints regained the lead 40-37 on a layup by guard Josie Wiebusch, a basket by Kelly and a free throw by Conlon.

“It was a hard-fought game both ways,” Southworth said. “The first half was tight all the way, and they second half was tight till about 5-6 minutes left.

“We didn’t handle their zone defense very well, and I don’t think we stayed as aggressive on offense against their zone. There were some driving opportunities that we didn’t take. We had them in the bonus with about 10 minutes to go in the half, and we didn’t take advantage of that. We only got two 1 and 1s in the last 10 minutes because we were not aggressive when we should have been.

“They’ve got a good defense. They’re athletic, and every shot is contested, and we didn’t shoot the ball well. Besides Sarah from 3-point range (3 of 5), the rest of them were 1 of 11. That’s under 10 percent. You aren’t going to win many games shooting that way.”

Minnehaha also beat the Saints in the first round of state Class AA last year.

“It’s kind of fun because you can’t stall all the time,” Southworth said. “The nice part is you’re down 5-6 points you can still play zone defense because there is a shot clock.”

It won’t be used in the playoffs. It’s being tested.