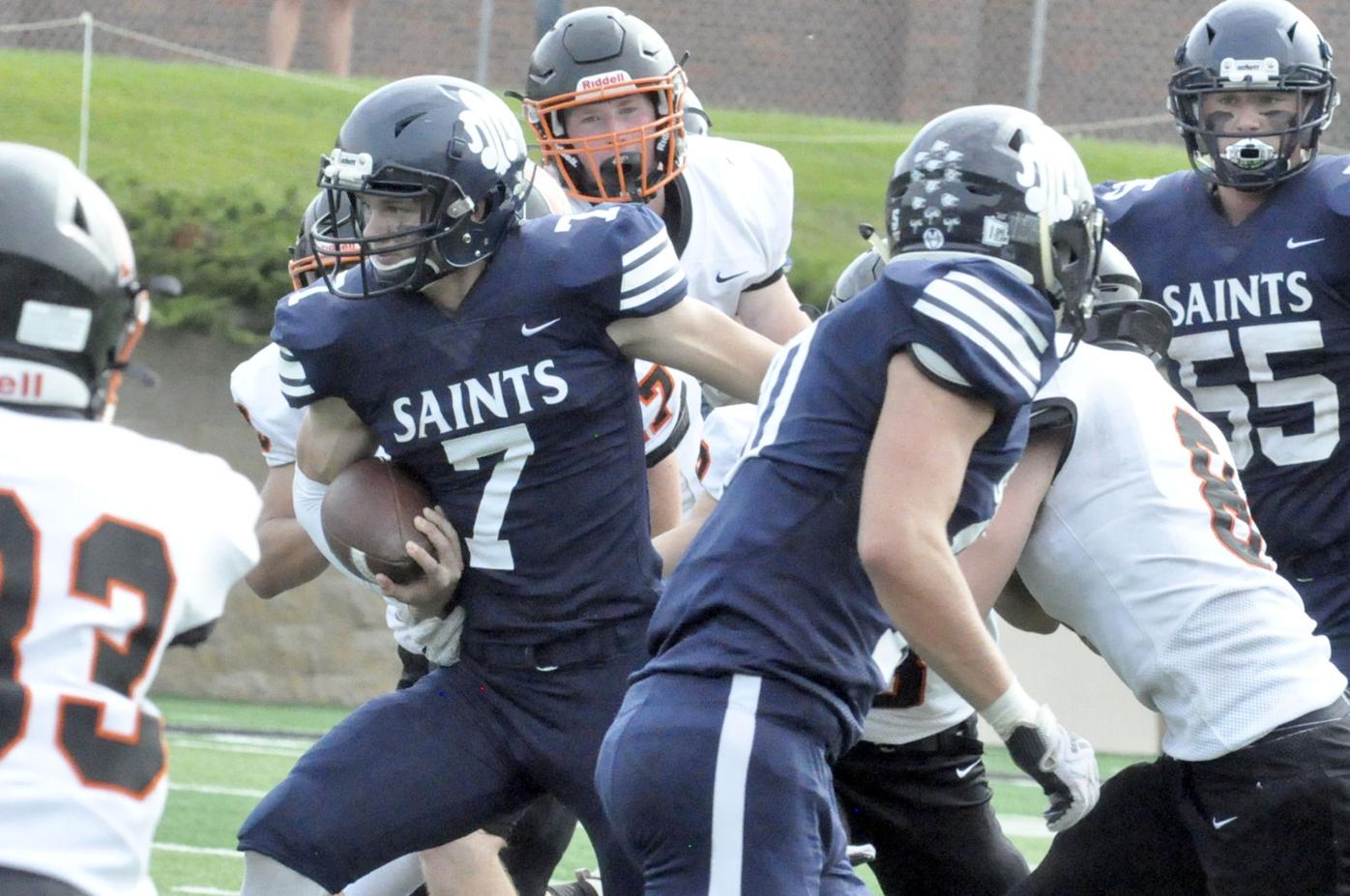 Quarterback Kole Guth stiff arms a would be tackler as he breaks through the middle of the defense for a 61-yard score. (Ben Camp/Southernminn.com) 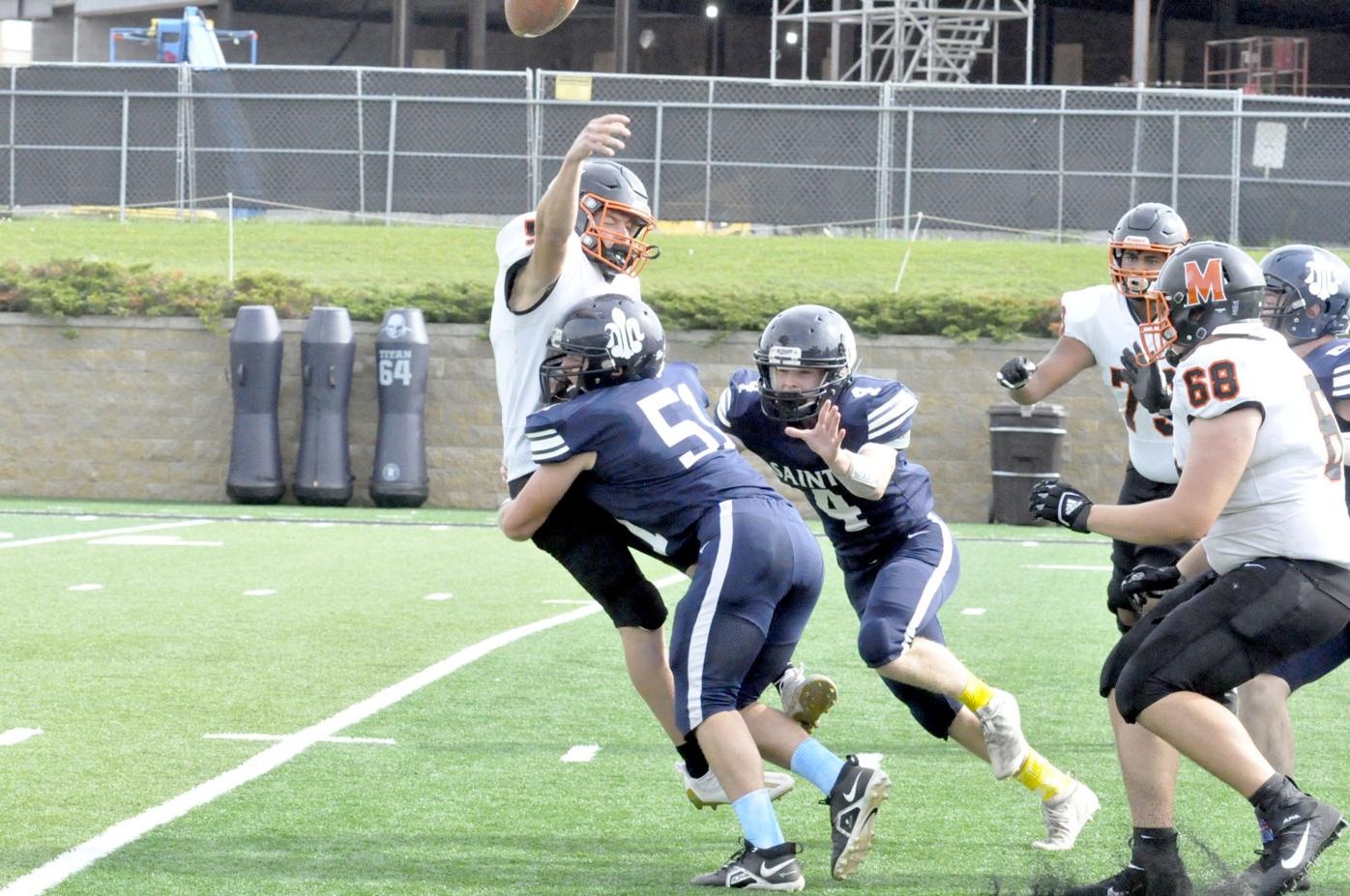 Leighton Robb hits the Tiger’s quarterback in the midsection as he attempts to throw the ball, resulting in an intentional grounding. (Ben Camp/Southernminn.com) 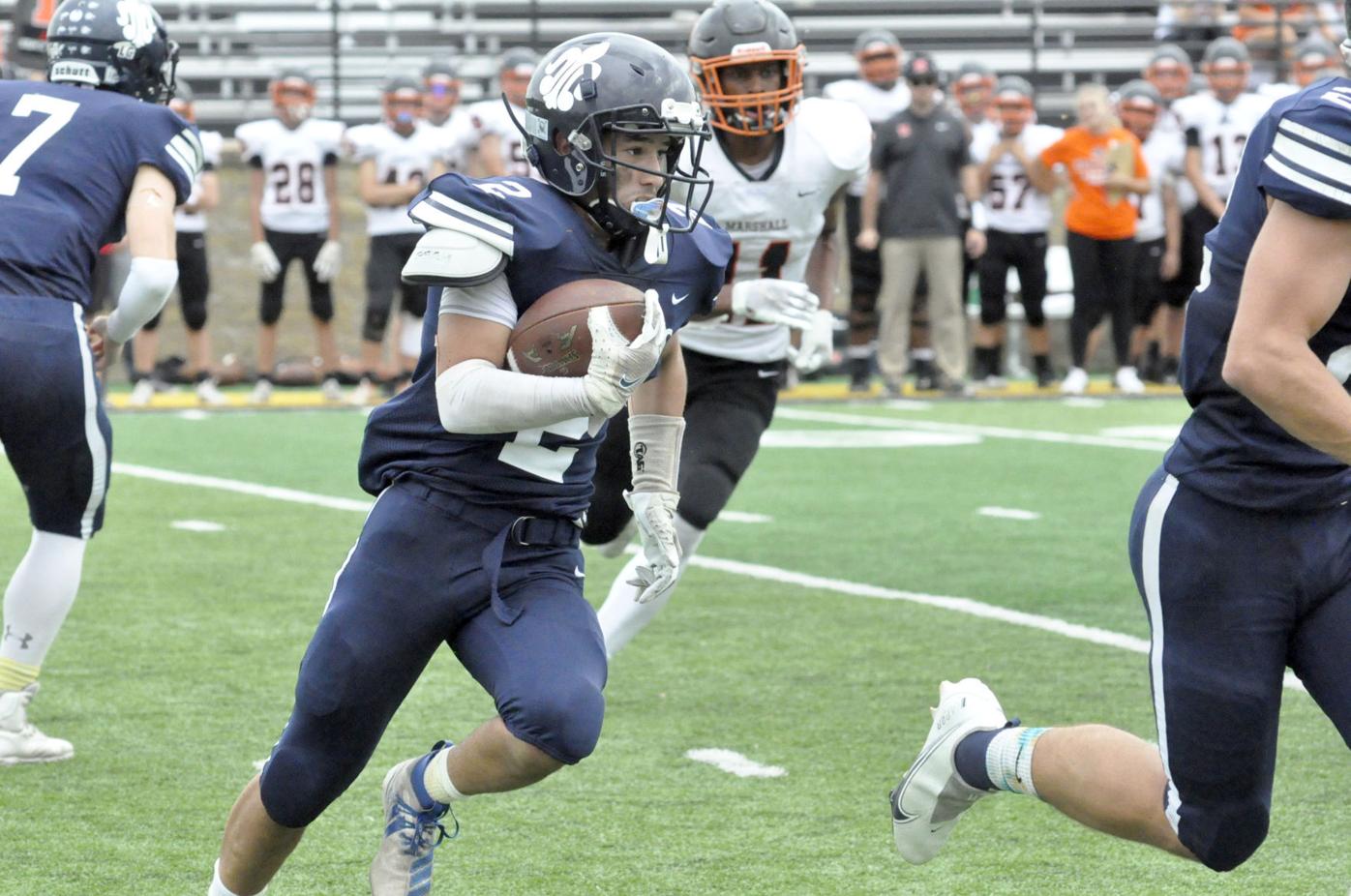 Nakiye Mercado runs to the right side on a sweep play. (Ben Camp/Southernminn.com) 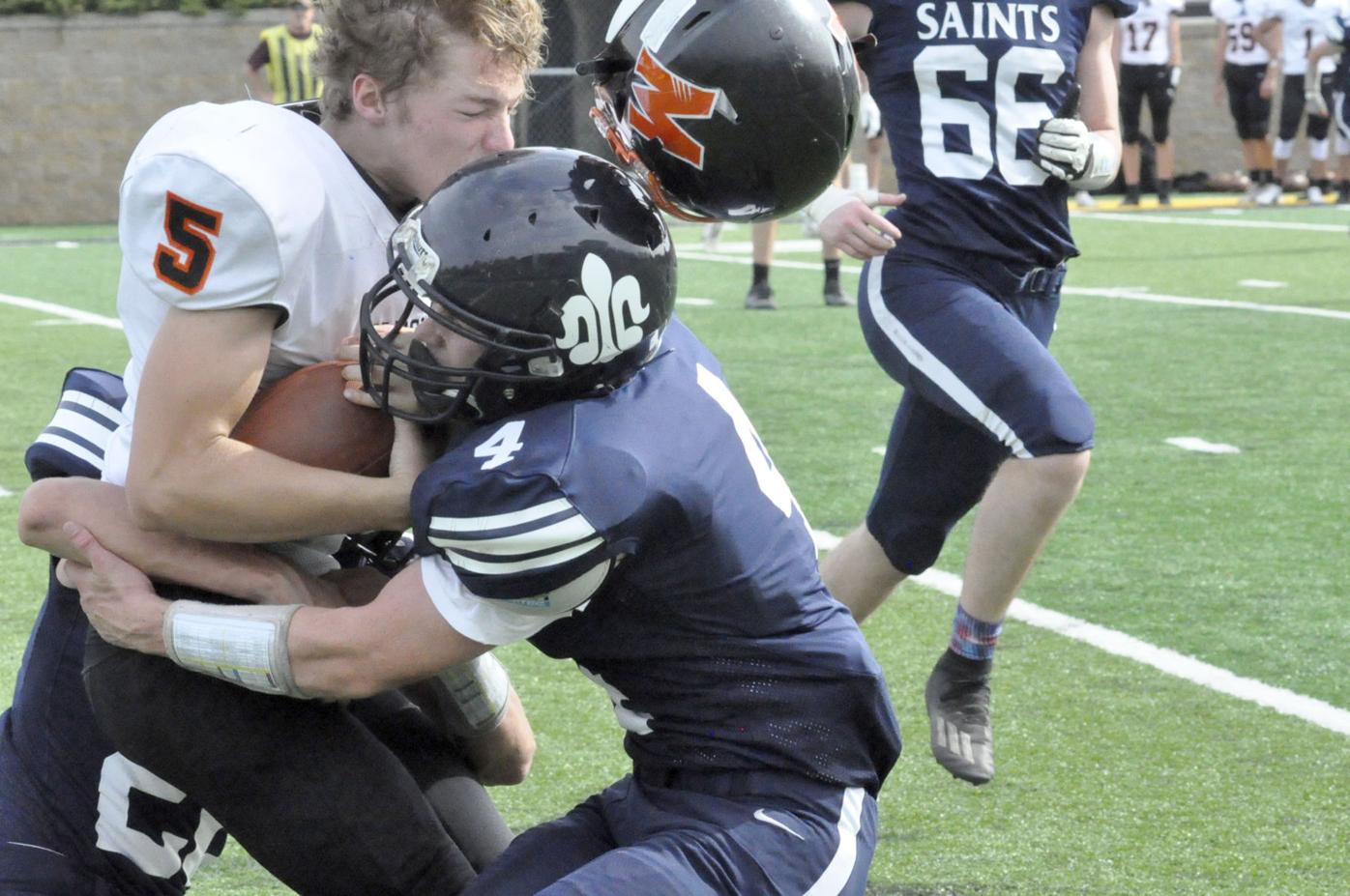 Riley Throldahl pops Marshall’s quarterback with a hard but legal hit to the chest resulting in the QB losing his helmet. (Ben Camp/Southernminn.com) 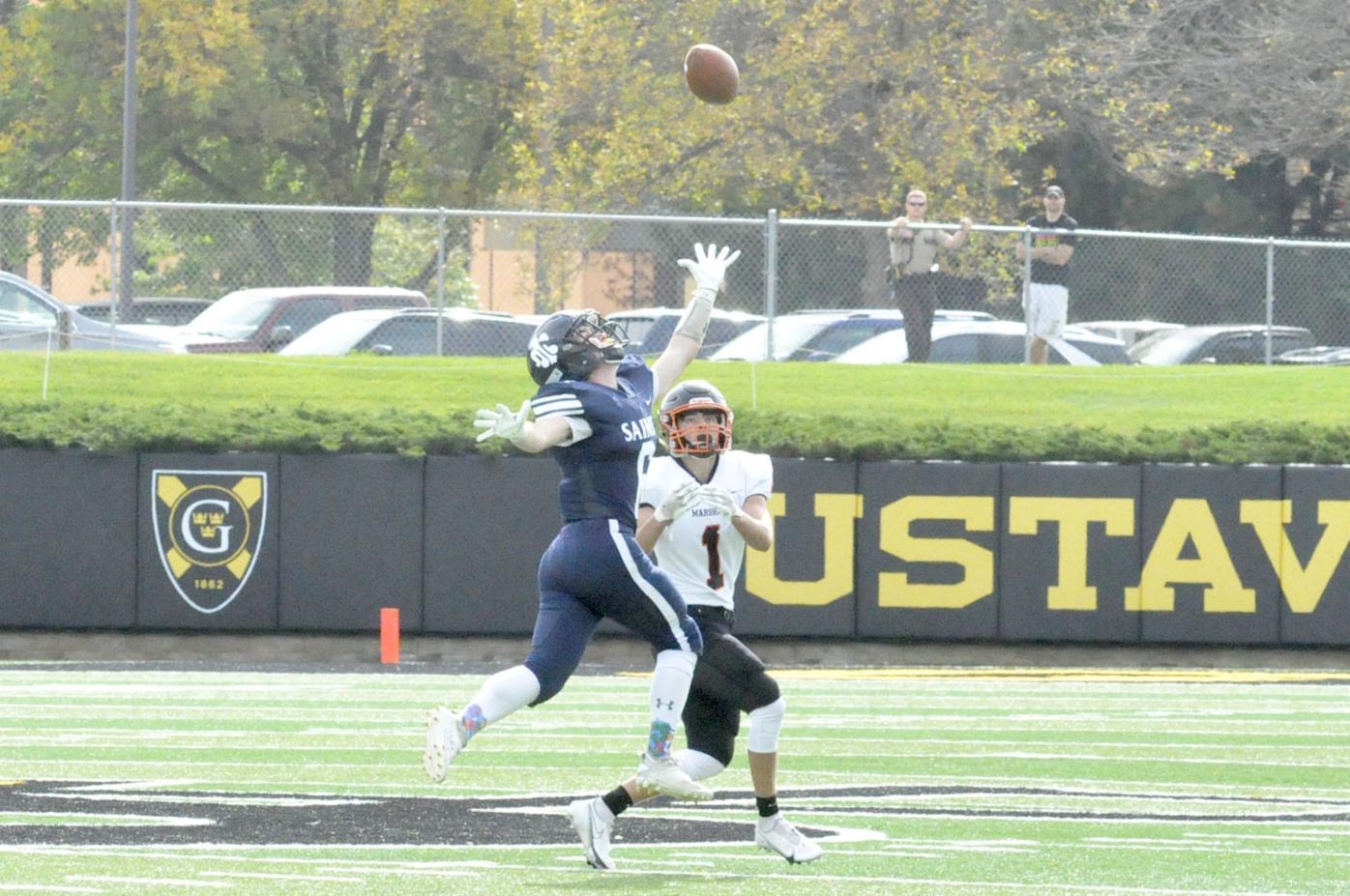 Safety Shea Hildebrandt reaches out to break up a downfield pass. (Ben Camp/Southernminn.com) 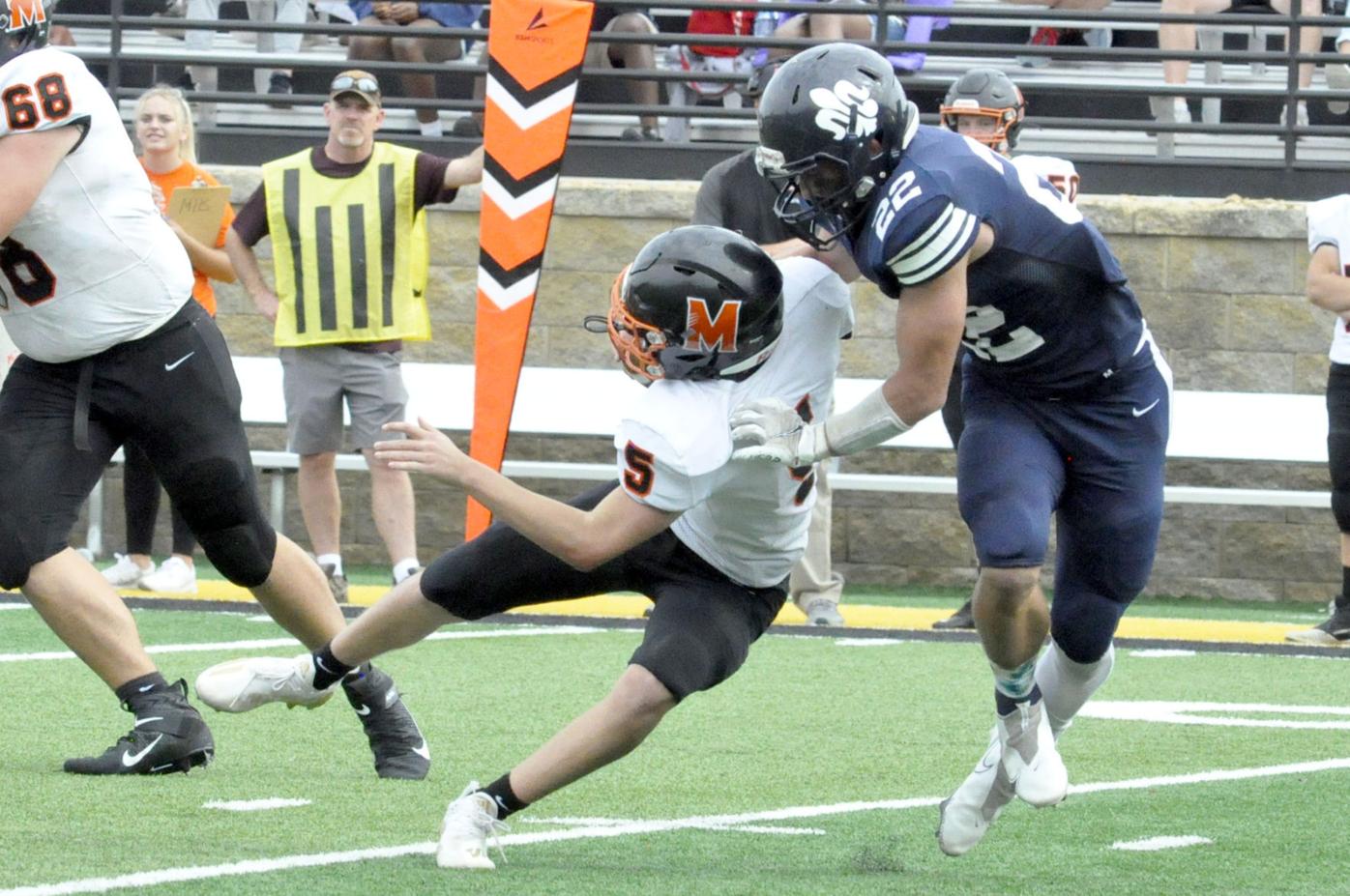 Vinny Guappone sacks the Tiger’s quarterback who was under assault all afternoon. (Ben Camp/Southernminn.com) 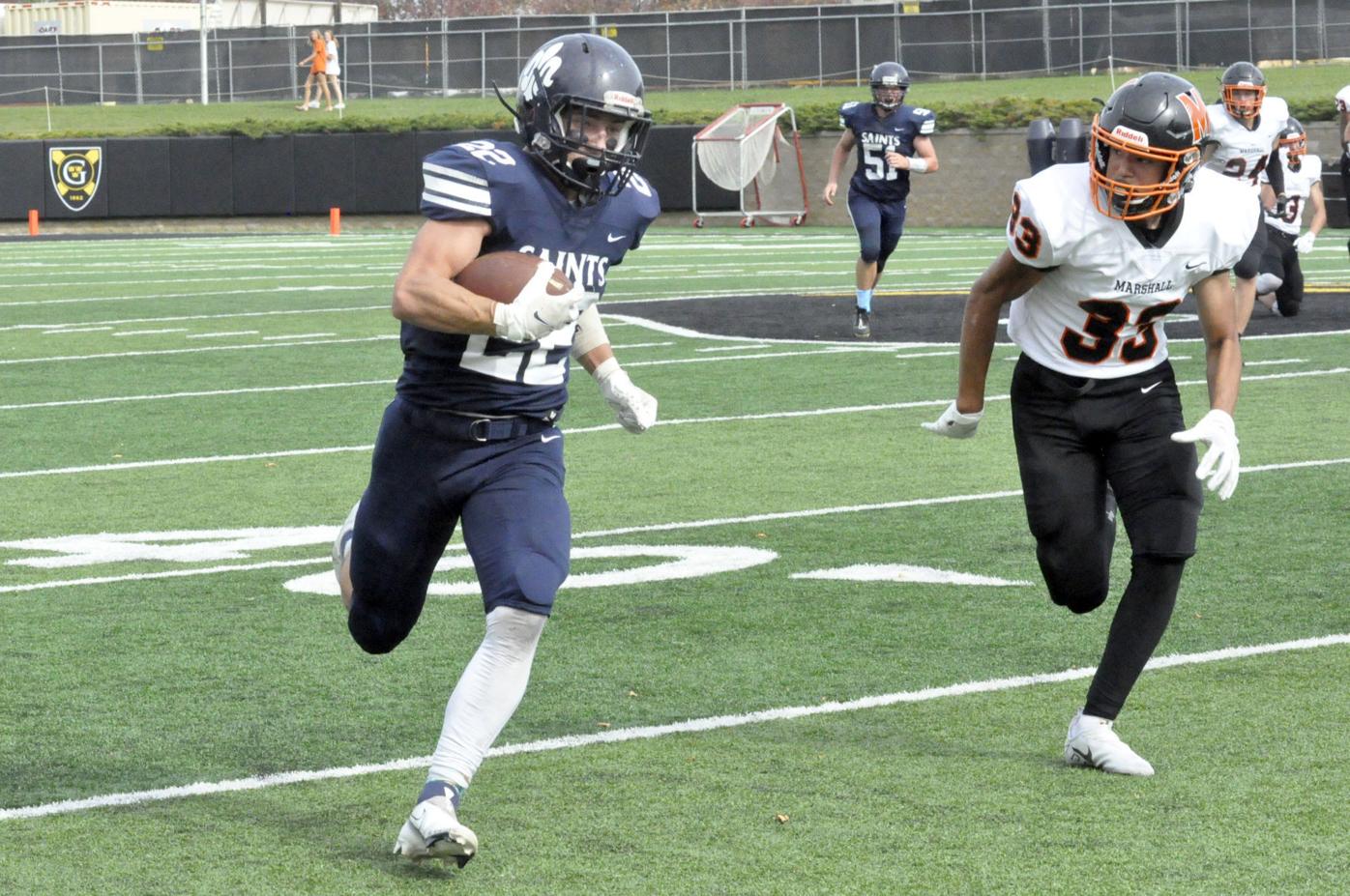 Vinny Guappone breaks to the right sideline to score one of his four rushing touchdowns on the day. (Ben Camp/Southernminn.com)

For the first time in recent memory, the St. Peter Saints football team defeated the Marshall Tigers behind a pair of explosive performances from seniors Kole Guth and Vinny Guappone. Big plays defined the entire game with the teams combining for seven touchdowns on plays longer than 25 yards.

“We prepped all week and were ready for this one,” St. Peter coach Brian Odland said. “Marshall is always a strong team and is always well coached, so we knew we were going to have to play really well.”

The Saints made it clear early that every play was going to push the limits as Marshall’s quarterback faced massive pressure on the opening drive. As Leighton Robb crashed down on him, he was forced to toss the ball into an open space, drawing an intentional grounding call and effectively killing the opening drive.

St. Peter took its opening drive right down the field before Guappone scored on an outside run play from nine yards out to go ahead. The next drive for the Saints saw quarterback Guth keep the ball on a read-option and after breaking a tackle in the middle of the defense, Guth took the ball 61-yards to the house.

The defense forced another Tiger punt and on the following drive, Guappone broke free straight through the heart of the defense, thanks to quality blocking from the line, 52-yards for another score, and after the PAT, St. Peter led 21-0 with 9:15 remaining in the first half.

Odland noted, “We thought we could establish the run game today and we were able to.”

Marshall retaliated on the following possession and scored its first points on a slant rout the receiver took 25-yards to the end zone before the Tiger kicker missed the PAT.

St. Peter fumbled on the next possession, giving the ball back to Marshall at the Saints 29, but on the following play, Riley Throldahl of the Saints sacked the Tigers’ quarterback to force a fumble. Guappone, who was pass rushing up the middle, scooped up the ball and took it 67 yards to the house.

“The defense played well and Vinny Guappone just wreaked havoc in there today,” Odland said. “Hats off to the defense, Steve Alger had a great game plan and they just attacked all day.”

St. Peter converted a two-point play and took a 29-6 lead into the half.

The Saints received the opening kickoff of the second half and took the ball at the 35 after the kick went out of bounds. The opening snap on offense saw Guth hand the ball off to Guappone who bolted to the right side of the line and outran the entire defense as he scored a 65-yard touchdown along the right sideline.

St. Peter threw in some trickery on a two-point play when Cole Filand found Sam Moelter with a pass out of a stacked formation.

Marshall scored the next two touchdowns with failed two-point plays on each and the Tigers, now trailing 37-18, attempted an onside kick which was covered up by Filand.

“It’s been constant growth with him as a player,” Odland said of Guappone. “Last year, we had him in the slot because we wanted the best 11 on the field and he ran great routes and was a great receiver. This year we have him in the backfield and he’s just making plays.”

The Saints victory was the first against the Tigers since the teams entered the South Central Red Subdistrict in 2015, and the first time since at least 2004, which is as far back as records go on minnesota-scores.net.

The win gives St. Peter a 4-2 record on the season and puts the team on top of the district with a 3-0 record.

The Saints return to the gridiron Friday, Oct. 15 when they travel to Montgomery to take on the Tri-City United Titans with kickoff scheduled for 7 p.m.