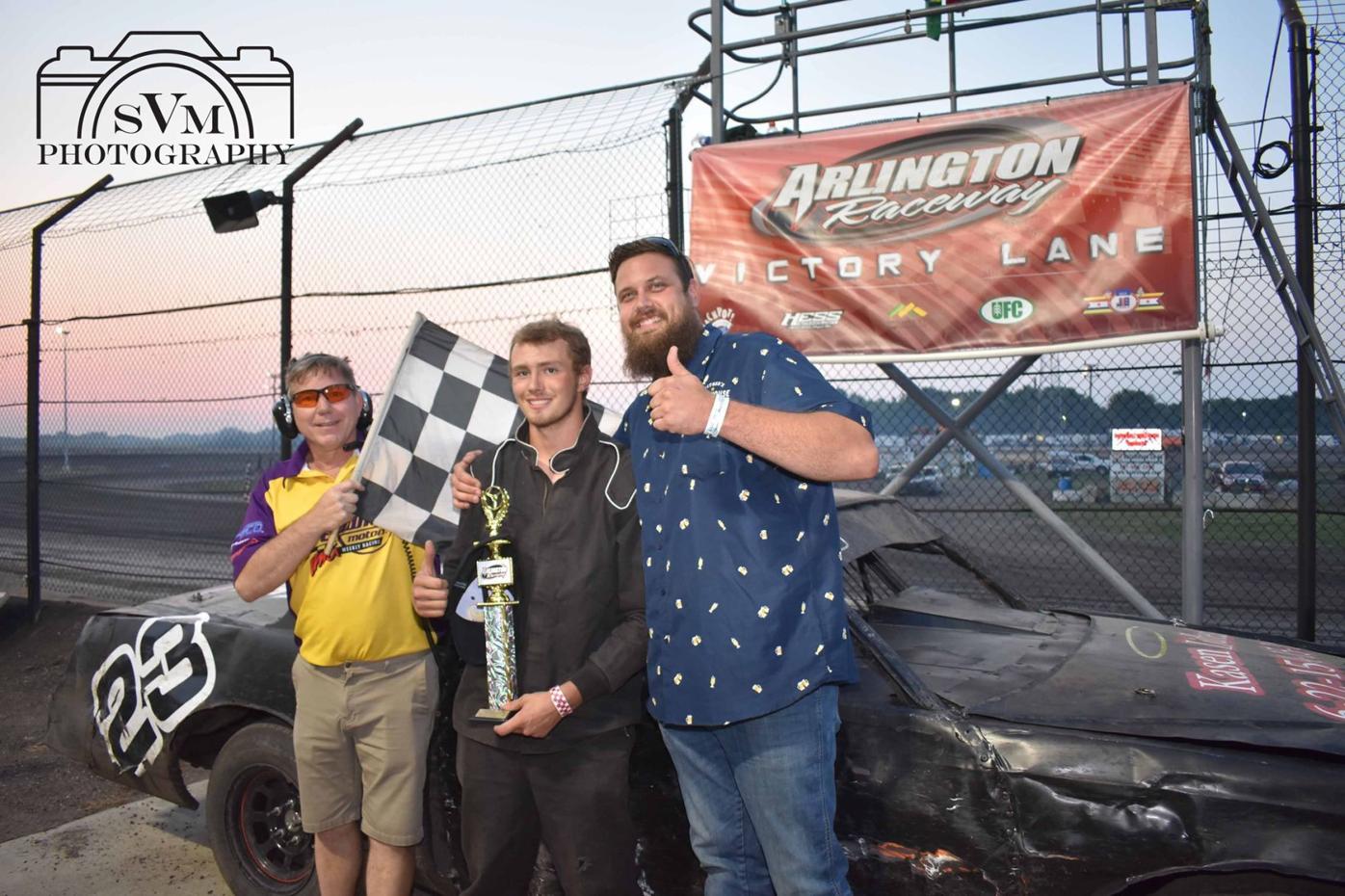 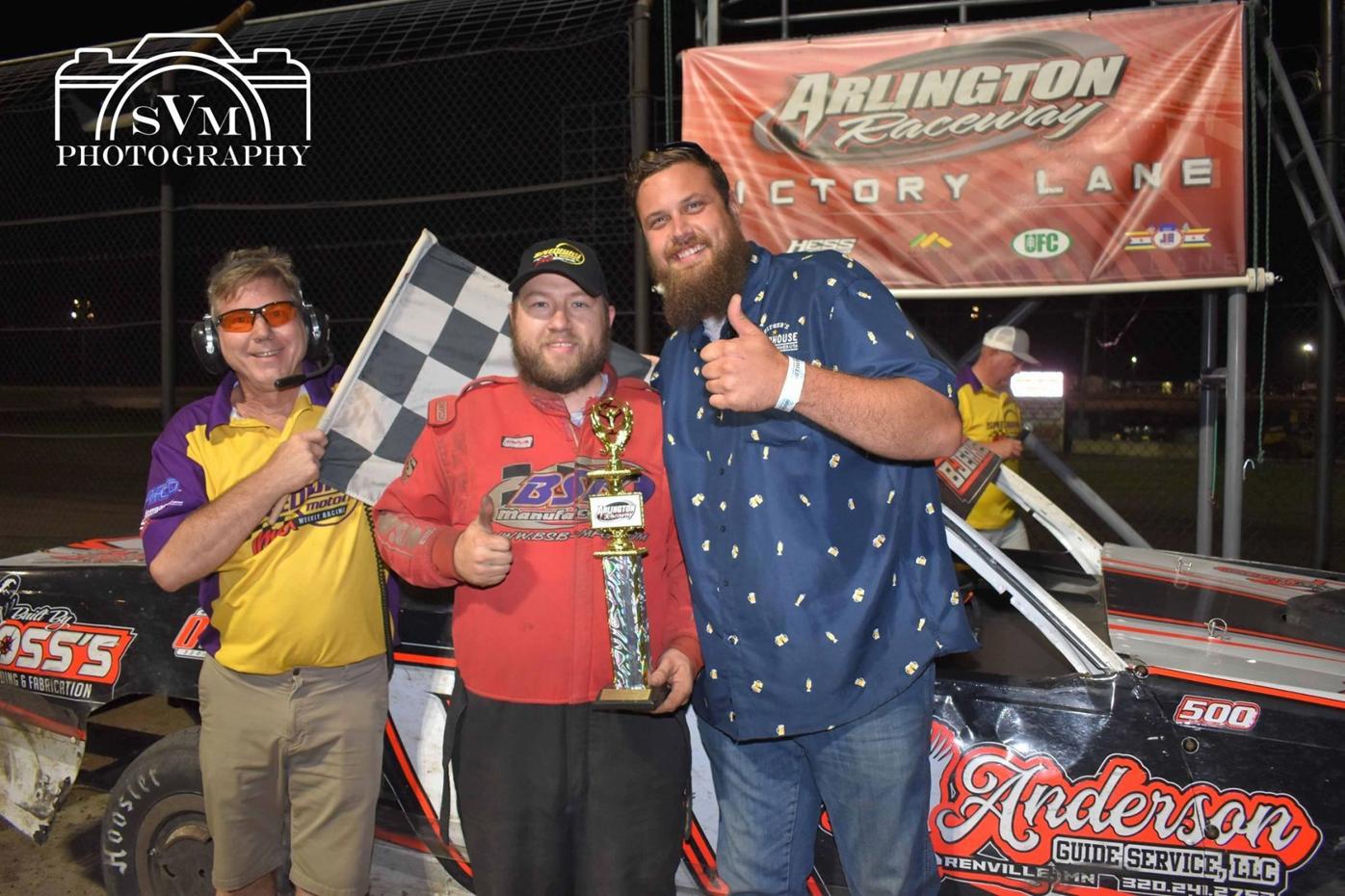 Rookie driver Tayte Harazin from Redwood Falls started on the front row of the Eckblad Trucking IMCA Hobby feature and stayed out front the entire distance to win his first feature in the class. Jordan Robinson stuck with him for the first 3 laps until a series of caution flags were thrown, first for the spinning 18m of Taylor Manderfield.

The second was for Jed Trebelhorn in turn No. 2 which ended his night and the third for Scott Porter again in turn No. 2 which ended his night as he spun around and got hit. That gave Reilly Gruenhagen the opportunity on the restart to get by Robinson and Cory Probst went along with him. But on lap 6 Probst hit the infield tire on turn No. 2 and spun out. After that caution another occurred when Mason Goettl had troubles which ended his night in the pit. When the race finally resumed it was all Harazin, he had the company of Matt Olson who had moved up nine spots but Harazin held on for the win. Probst was able to make it up to third place on the last lap behind Olson.

The Exmark Outlaw Hobby feature was thrilling to watch as another rookie driver led 13 laps of the 15 lap race. An extra $100 was on the line to win as there was a bounty on the 3k car of Karl Hewitt for anyone else that won beside him.

Logan Wagenius of Gaylord was the early leader in the flag to flag race. He was doing a great job until the two cars of Bryan Apitz and Dakota Robinson worked through the field while Hewitt was having suspension problems on this car which slowed him down. With only two laps left in the race both Apitz and Robinson got under Wagenius and took away his lead. Apitz went onto win with Robinson following him to the finish line and Wagenius was able to finish in 3rd ahead of Darrell Eckblad.

A first lap red flag occurred on the first lap of the Coors Light IMCA Sport Compact feature when Gavin Selly, of St. Peter, spun and rolled in the bottom of turn No. 2. He was ok but done for the night. It looked as though Alan Lahr of Nicollet was going to win the race as he led 8 of the ten laps with the 30 of Nick McConnell racing side by side until Arlington’s Marschall Robinson took the low side and passed Lahr with only two laps to go. Robinson led Lahr to the checkered flag while the brother duo of Nick and Brett McConnell exchanged spots as the checkered flag was thrown with Brett taking third ahead of Nick.

The Jerry’s Home Quality IMCA RaceSaver Sprint feature was fast and furious with two different leaders. A first lap caution came out when the 21 of Brett Allen bounced in turn No. 1 and spun around. He was able to continue but found troubles navigating the car a couple of laps later and left the track. The 42 of Michael Stien took the lead on the first lap and had a commanding lead until lap 6 when a yellow flag was thrown for Zach Wight spinning in turn No. 4.

The field tightened up and Trevor Serbus who had moved up quickly had his sights on Stien as the two started racing side by side and each trading spots. The battle behind them was father and son duo of Bill and Matt Johnson as those two kept trading spots too. With a few laps left in the race, Serbus had the edge over Stien and won the race. Father Bill was able to get ahead of Matt on the white flag lap and Chris Graf who added to the mix. Son Matt got by Graf right before the flags to take 4th place.

Shaun Bruns of Olivia had the lead in the very close B&B Racing Chassis IMCA Stock Car feature as he, Dave Moriarty and Josh Larsen all were racing side by side for the first five laps of the race. On lap 6 Bruns encountered troubles with much smoke coming from his car and drove into the pit area. That gave the lead to Moriarty with Larsen trailing him.

Another caution was thrown for Taylor Willms in turn No. 2 spinning. On the restart, Ryan Bjerkeset got around both front cars to take the lead and hold on for the win while Moriarty and Larsen raced side by side for the duration with Larsen edging out ahead of Moriarty to take 2nd place.

The Unhinged Pizza IMCA Sport Modified feature saw three different leaders in the race with the first being Tom Malchow as he led the field for the first lap with Chris Neisen following him. Neisen held on for two laps until a caution came out for the 2j car of Jeff Carter in turn No. 3 as his radiator gave out ending his night. On the restart, Neisen and Matt Looft raced side by side for a few laps with Looft always ahead at the flags, but another caution came out half way through the race when the 15 of Kyle Campbell spun in turn No. 2. The cars restarted and this time both the cars of Malchow and Zach Davis got by Neisen, those two challenged each other while Looft commanded the race. As the checkered was waving Davis flew by Malchow to take 2nd place, Malchow held on for 3rd ahead of Eric Larson.

For the 2nd consecutive week Clint Hatlestad won the Ottomotive Tire & Repair IMCA Modified feature. Early leader Toby Patchen led the first 3 laps but a series of yellow flags on lap 3 gave Hatlestad the opportunity to get out front. He was able to remain the leader dispite efforts from Trent Loverude who started in the 5th row and gained spots quickly. Loverude took 2nd ahead of Todd Stinehart who passed Patchen before the checkered flag.